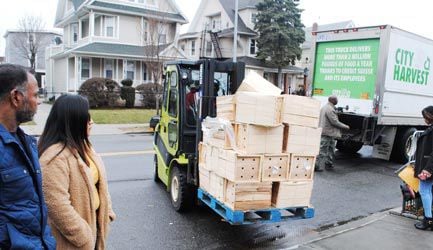 In less than 48 hours, these farm fresh string beans rescued by City Harvest will be packaged up with other produce and groceries for a food pantry for the needy run by volunteers and staff of the River Fund in Richmond Hill. 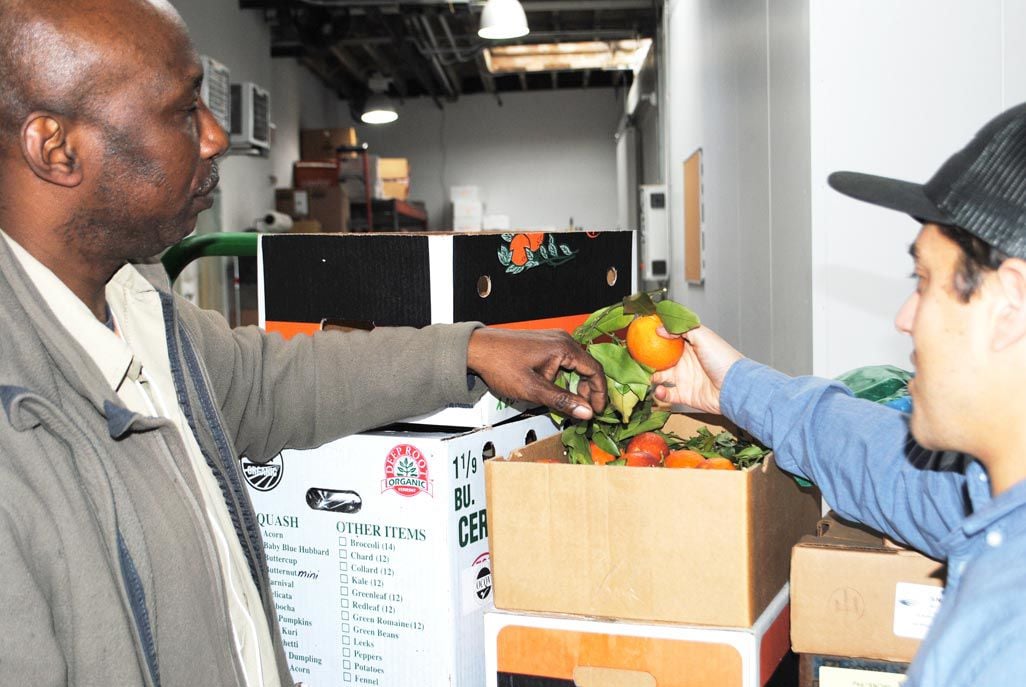 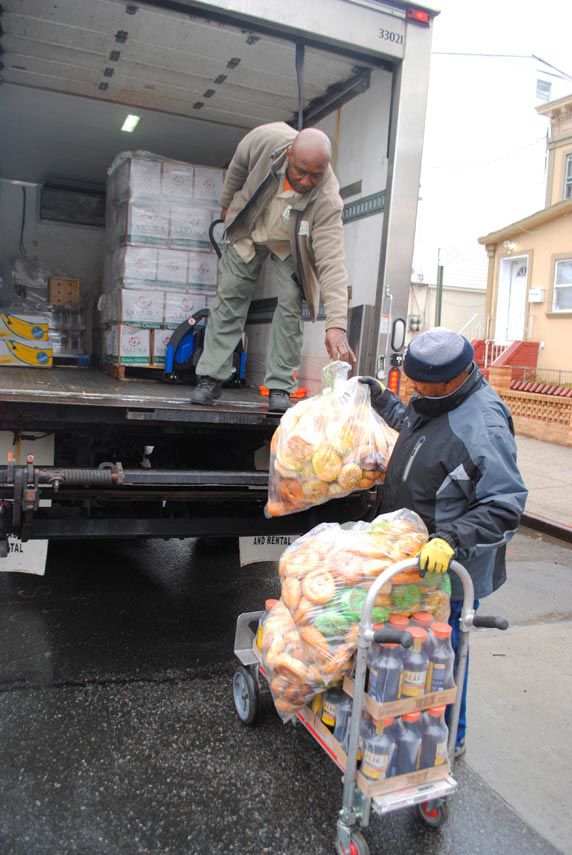 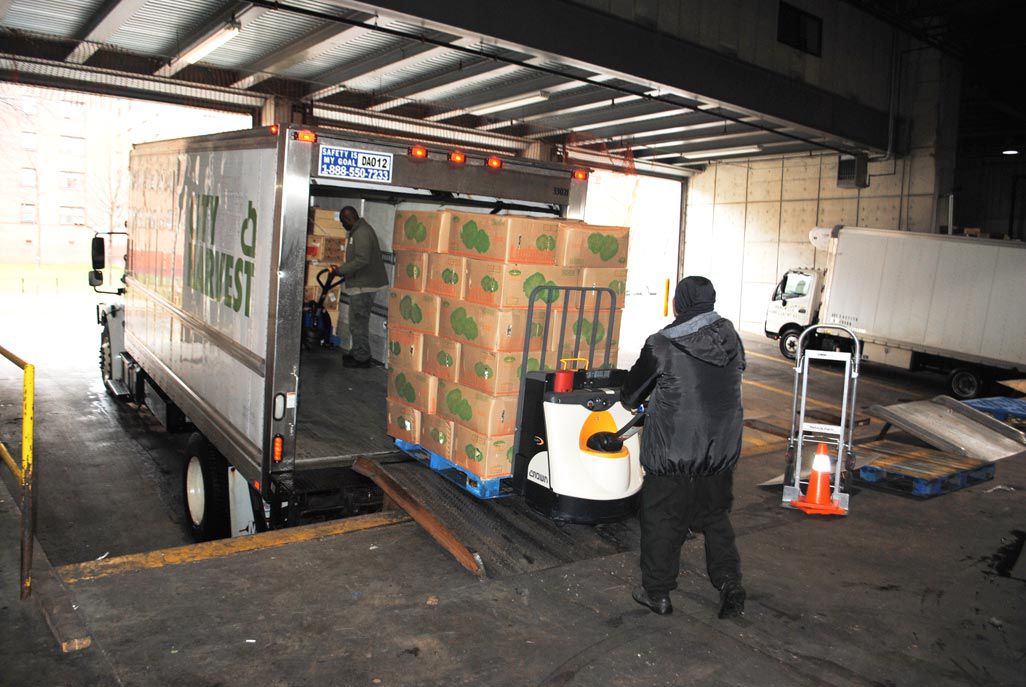 Cases of lettuce weren’t on the original manifest, but City Harvest typically doesn’t have trouble giving it to those helping the needy.

In less than 48 hours, these farm fresh string beans rescued by City Harvest will be packaged up with other produce and groceries for a food pantry for the needy run by volunteers and staff of the River Fund in Richmond Hill.

Cases of lettuce weren’t on the original manifest, but City Harvest typically doesn’t have trouble giving it to those helping the needy.

March 21 was a rainy morning in Long Island City, and Lyndon Hicks already had been on duty for three hours and completed one run as workers loaded his truck again at the warehouse that houses City Harvest’s Food Rescue Facility.

Since 1982, City Harvest has been collecting donations of food from farmers and green markets, food manufacturers and distributors, bakeries, supermarkets and other sources and getting it to people in the city who are hungry through food pantries, soup kitchens and social service organizations.

This year it is projected to rescue 61 million pounds of food for 1.2 million people in the five boroughs, including one out of every five children.

Hicks believes most people in the city would be surprised by the people who count on the agency’s trucks to show up.

They include families in which one or both parents are employed, single parents with children and others all trying to make ends meet without having to chose between food and rent or the electric bill.

“It’s not indigent people,” Hicks said. “It’s nothing to be ashamed about. Hunger has no face. No age. No skin color. No nationality.”

Fresh produce is always in demand, and the warehouse that day has massive amounts of carrots, onions, apples and other produce stacked sometimes 6 feet high or more on wooden pallets that have to be moved by forklifts.

Workers load Hicks’ box truck with several dozen cases of fresh string beans and pallets of family-sized bottles of brand-name iced tea. The nine-stop run will begin just over the border in Brooklyn and end in Richmond Hill. Each of the three delivery stops has been assigned a set amount of string beans and iced tea, as well as fresh scallions that will be picked up at the first of six collection stops, where donations can be prearranged, as with the scallions, or contain surprises.

“Any donation we get that is unscheduled the driver is responsible for getting people to take,” Hicks said.

City Harvest operates seven days a week and has 160 staff members and about 10,000 volunteers. By the agency’s estimate, more than 10 percent of the borough — about 300,000 people, including about 80,000 children— qualify as food insecure.

The term is defined by the U.S. Department of Agriculture as “a household-level economic and social condition of limited or uncertain access to adequate food.”

City Harvest delivers to more than 50 agencies in Queens and serves more than 1,000 people a month with a pair of mobile green markets in Astoria and Queensbridge.

Hicks’ first stop is just a short hop over the Pulaski Bridge into Brooklyn to pick up the scallions, the green onions used as garnish and flavoring. The two pallets are piled too high to fit into the truck, necessitating the top two rows of each be put on one of their own.

And there’s an unexpected bonus — a pallet filled with cases of lettuce that also gets piled into the back.

The next stop is a building used by the Hale & Hearty Soups restaurant chain in East Williamsburg, just to see what might be available. Hicks and his clients hit the jackpot.

“Seven hundred pounds of soup,” he said getting back into the truck, which is filling quickly.

The next stop is Natoora, a distributor that works with small, select farms.

“We work with a lot of restaurants and individual chefs,” said Eliza Quanbeck, an account manager there.

Again, the surprise is a pleasant one, with boxes of citrus and other fruit.

The first delivery is at Make the Road NY in Brooklyn, which provides advocacy and numerous services for the immigrant community.

The group is expecting the scallions, iced tea and green beans, and upon arrival a bucket brigade of volunteers takes the cases down to the building’s basement.

Hicks doesn’t have to ask twice if they could use the lettuce, as well as the cases of fruit from Natoora, and both soon are on their way to the basement to be sorted for recipients. The soup, however, contained in bags within corrugated boxes, was a harder sell.

“I want our people getting good, fresh food, not processed food,” says a woman supervising the delivery.

A short few blocks and it was back in Queens, heading along Myrtle Avenue. A Food Bazaar store, which Hicks checks out regularly, has an assortment of cookies, juice boxes, cereal and canned goods.

Glendale Bagels has clear bags the size of lawn and leaf bags filled with rolls and bagels. Greenwood Bakery also has some bread to donate in this visit.

And while Crossover Baptist Church on 101st Avenue in Jamaica is only expecting some iced tea, a few bags of bread and rolls are welcome.

While crossing over the Pulaski Bridge early in the morning, Hicks says the last stop on the day’s run “has lines around the block when they have their food pantry.”

It is at River Fund on Lefferts Boulevard on Richmond Hill.

“We’re a frontline poverty organization that happens to have a food pantry,” says Swami Durga Das, who founded the charity and social service agency in his own home.

The off-loaded string beans and scallions will be sorted and packaged in the coming days by young volunteers.

Be it bread, produce or the odd canned goods, Das will find shelf space for it. Even the soup, though his organization itself does not have the facilities to cook and serve it.

“We work with most of the food pantries and soup kitchens in the area,” he says assuring that it will be feeding the hungry in short order. Das, however, also appreciates the bottles of iced tea, an extra that people might not be expecting in their next visit.

“That’s nice to have,” he says with a broad smile.

Das confirms Hicks’ description of the lines for the Saturday food pantries. And, asked what the difference would be between City Harvest arriving or not arriving for one scheduled visit on a single day, he says it is incalculable.

“Every Saturday we can serve 800 to 900 people,” he says. “When we started out, City Harvest supplemented our food pantry. Today they’re vital.”