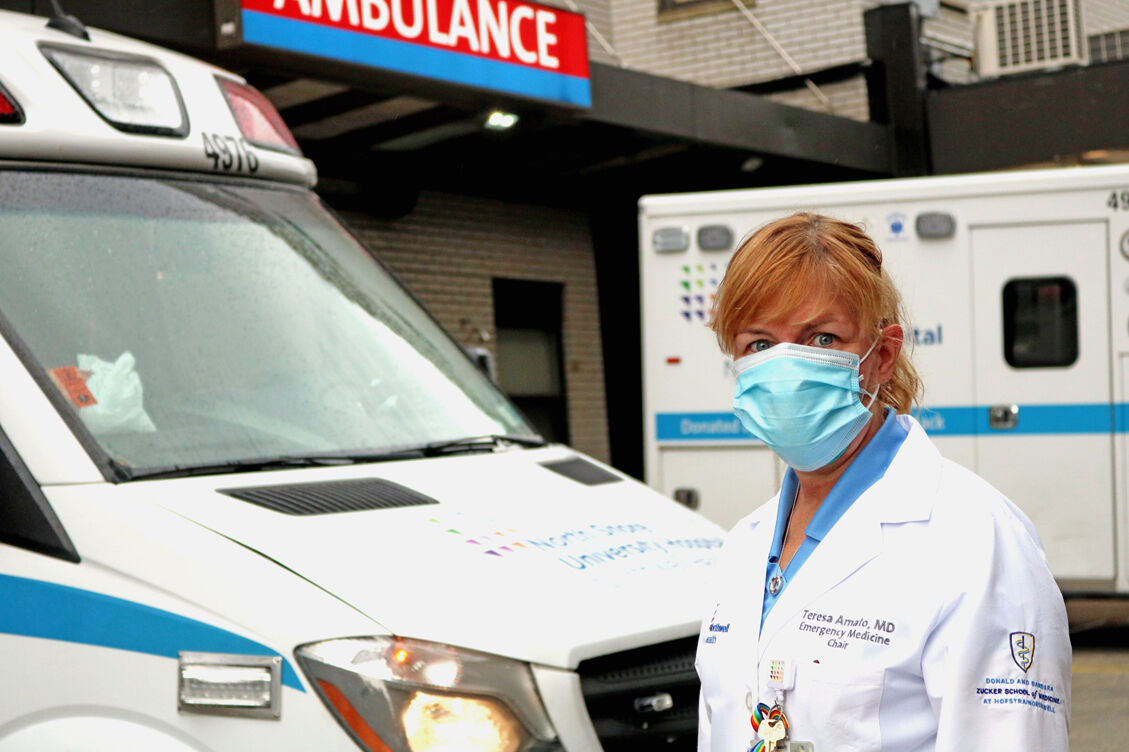 Dr. Teresa Murray Amato, the director of emergency medicine at Long Island Jewish Forest Hills-Northwell, stands in the ambulance bay at the hospital on 102nd Street. 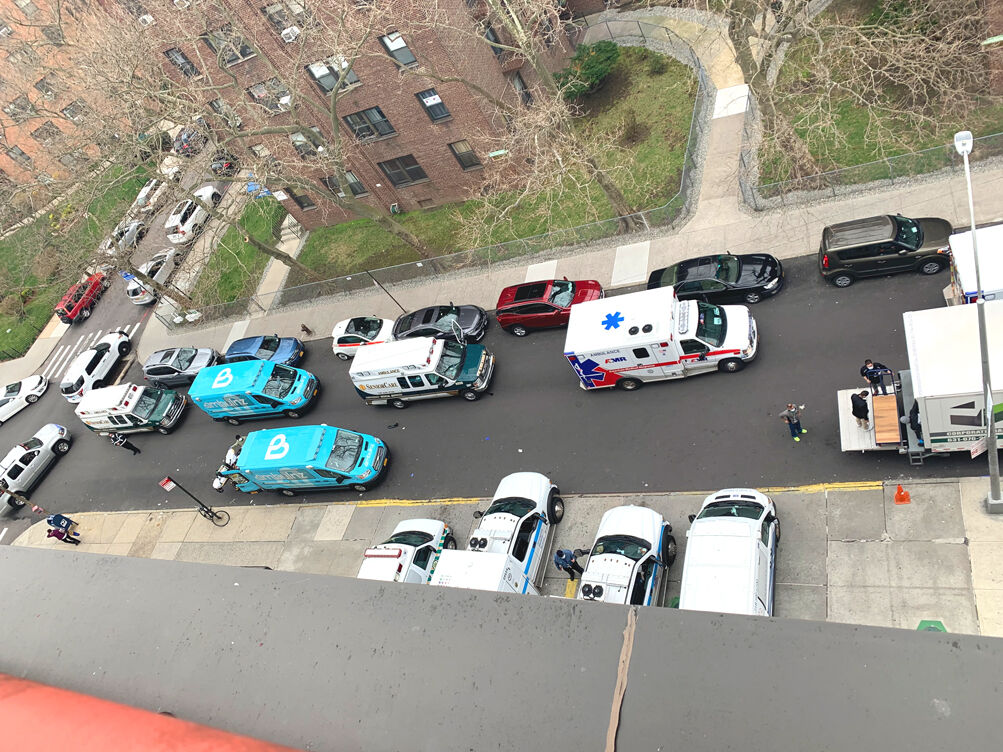 At the height of the pandemic, members of the hospital’s Emergency Command Center had to direct traffic on the surrounding roads in order to let ambulances pull up to the emergency department, left. The hospital celebrated Secundino Bajana, center, LIJ Forest Hill’s 1,000 discharge, on June 3. No matter how chaotic it got in the ED, staff had the situation under control, right. 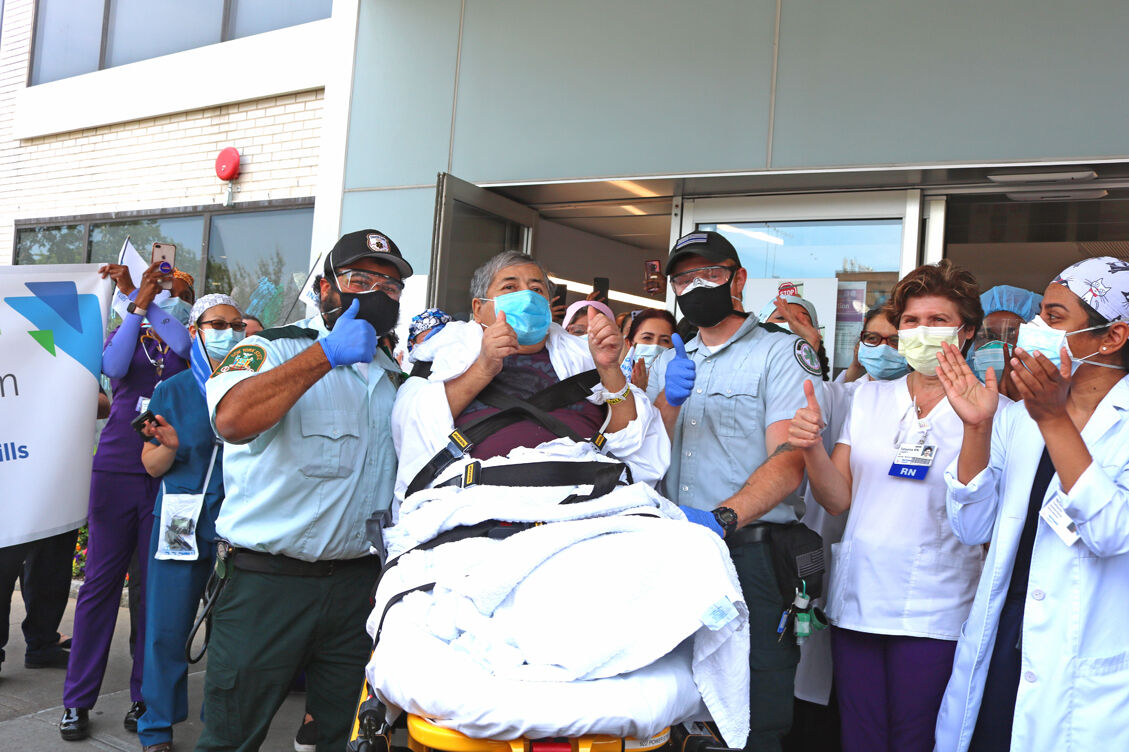 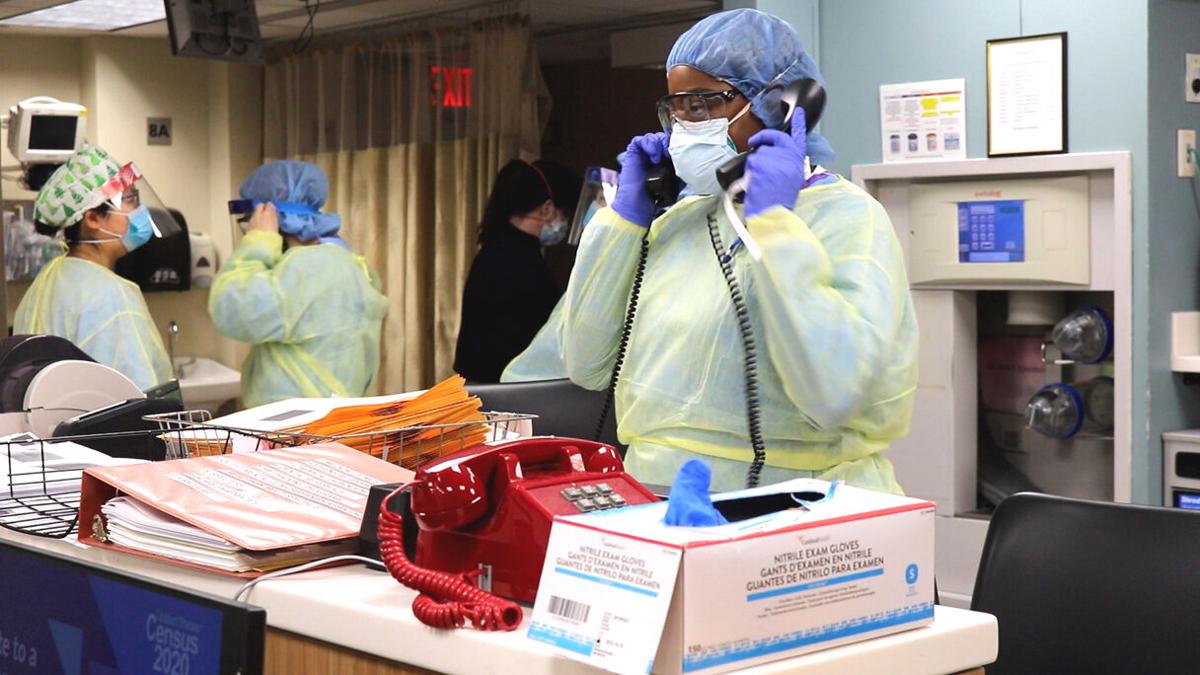 No matter how chaotic it got in the ED, staff had the situation under control, right.

Dr. Teresa Murray Amato, the director of emergency medicine at Long Island Jewish Forest Hills-Northwell, stands in the ambulance bay at the hospital on 102nd Street.

At the height of the pandemic, members of the hospital’s Emergency Command Center had to direct traffic on the surrounding roads in order to let ambulances pull up to the emergency department, left. The hospital celebrated Secundino Bajana, center, LIJ Forest Hill’s 1,000 discharge, on June 3. No matter how chaotic it got in the ED, staff had the situation under control, right.

No matter how chaotic it got in the ED, staff had the situation under control, right.

March 2020 started much like any other spring, and yet there was unspoken tension. We knew about what was happening in the rest of the world. We knew it was coming and we knew Queens could be a potential vulnerable area due to its travel patterns (two international airports), population density, diverse cultures and multigenerational homes. What we did not know was how well COVID would prey on those vulnerabilities.

The first COVID patients came to us in early March. Most were suffering upper respiratory symptoms like cough and sore throat. We were sending most people home with information about COVID and letting them know that they most likely had it and what to do about quarantining.

Not long after we saw those same patients, they were back and further along into the viral symptoms. These patients were now extremely short of breath. Many had low oxygen levels, also known as hypoxia, and their hypoxia was like nothing we had ever experienced before. We had every oxygen wall unit in use. We were using portable oxygen tanks in hallways. We started seeing X-rays that showed extensive lung disease. Blood tests were showing remarkable abnormalities in kidney, liver and blood functions. There was something else we all started to notice, but were hesitant to say out loud ... so many of the sickest patients were non-white. COVID, it seemed, was discriminating against people of color in the most malicious way.

Suddenly the whole hospital was COVID. The Intensive Care Unit expanded to four times its normal volume. We were intubating and placing patients on ventilators at a rate we never had before. Staff came from all over the Northwell health system to help out. We were sent extra much-needed equipment from our sister Northwell hospitals. And for a while we were holding our own ...

By the end of March it became apparent that we had to do something different. You need three things to care for patients: staff (we continued to get help from all over), equipment (due to emergency management planning we were never without supplies) and space (and that was our problem). We simply had no more room.

March 31 was a turning point for Long Island Jewish Forest Hills. We reached out to all of the emergency departments within Northwell. Within hours, there was what can only be described as a parade of ambulances lined up around the hospital. They were here to transport our patients to sites that had the staff, the equipment and the space to care for our patients. It felt like the cavalry had arrived.

Using existing Northwell infrastructure and technology, over the course of just a few weeks, LIJ Forest Hills was able to transfer close to 500 patients to its sister hospitals within the system. This included almost 90 patients on ventilators. Although we were still well over our normal capacity, we knew we had the ability to continue our fight.

We grew more accustomed to hearing “Here Comes the Sun” playing overhead every time a patient with COVID was discharged. We would go on to celebrate our 1,000th COVID discharge. And we would mourn the souls we could not save.

I don’t remember exactly when the first time I heard it was, probably mid- or late April. But I know where I was — sitting in my office.

I have a window that faces out into the neighborhood. It was a few minutes after 7 p.m. and although the sun was starting to set, it was still light out and I could see people standing out on their balconies and they appeared to be yelling and shouting. I ran out of the ambulance bay thinking something terrible had to be happening. And I was hit by a wave of sound and emotion. Our Forest Hills community was saluting us! As tears came to my eyes, I waved up to the faces high above me. There was a chorus of voices raining down on the hospital. “Thank you heroes,” “Health care heroes,” “Thank you Forest Hills Hospital!”

As we head toward our recovery and new normal, it is so amazing to see our department clean and shiny again. Everything has been scrubbed or replaced and it is almost hard to remember what it looked like that day in March when it all seemed so overwhelming. I’m not sure yet how much or in what ways we’ve all been changed, but I know that the connection between our community and the LIJ Forest Hills hospital now feels like an unbreakable bond that was made stronger in the face of an invisible enemy.