Flames sprouted from an East Flushing home’s exterior shed and spread to the home’s rear Feb. 15, killing 65-year-old Stephen Blumling and his 6-year-old son Shawn, left his other son with burns and sent two firefighters to the hospital. 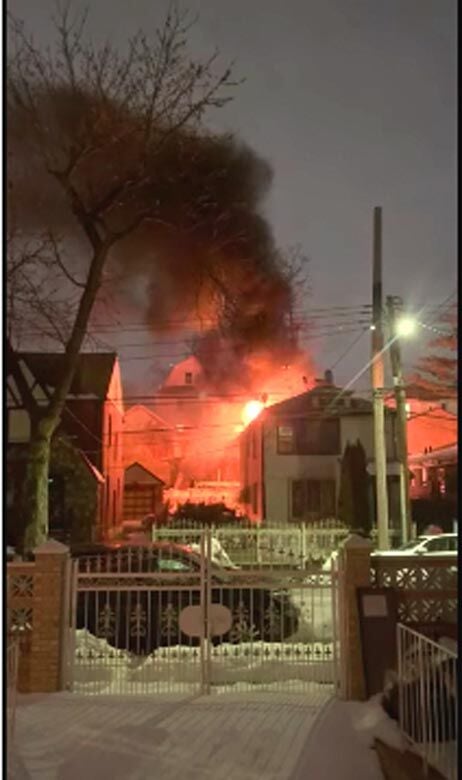 Two people, including a 6-year-old boy, were killed Monday morning at a blaze which tore through a two-family house on 157th Street in East Flushing.

Flames sprouted from an East Flushing home’s exterior shed and spread to the home’s rear Feb. 15, killing 65-year-old Stephen Blumling and his 6-year-old son Shawn, left his other son with burns and sent two firefighters to the hospital.

Two people, including a 6-year-old boy, were killed Monday morning at a blaze which tore through a two-family house on 157th Street in East Flushing.

The blaze that killed an East Flushing man and his 6-year-old son on Monday morning began as an electrical fire that moved from an exterior shed and extended to the rear of the house, according to a statement issued by the FDNY Fire Marshal’s Office on Tuesday afternoon.

The fire has been ruled accidental.

Stephen Blumling, 65, and one of his sons, Shawn, of 45-54 157 St., were pronounced dead at the scene according to the NYPD. Another child, whom published reports and a neighbor called the dead boy’s twin brother, was taken to NYC Health + Hospitals/Jacobi in the Bronx. Police said he was listed in stable condition suffering from burns to his body.

The Fire Marshal’s Office reported on the FDNY’s Twitter page Tuesday afternoon that a smoke alarm was “present but not activated.”

A spokesman for the FDNY in an email to the Chronicle on Tuesday said both firefighters have been released, though the department declined to comment on whether their injuries and recovery time will require them to miss time on duty.

The fire in the two-story private house was reported at 1:12 a.m. according to the FDNY. Twelve units and 60 firefighters responded to the blaze, which was reported to be under control by 2:22 a.m.

A neighbor has established a GoFundMe campaign in an effort to raise $8,000 for the family. It can be found at gofundme.com/f/help-family-lost-their-home-to-a-big-fire.

One hundred thirty-six people had donated $7,211 by noon Wednesday.

“We learned that the father and 1 of the twin sons died!!!” neighbor Hong Qu said in GoFundMe page. “Devastating! Please pray for the family.”

The Uniformed Firefighters Association also wished consolation for the family on its Twitter page.

“Our heart breaks for the family in this unspeakably difficult time, and we offer our condolences,” the union said.

The online records of the New York City Department of Finance show the house to be owned by Vishnu and Karnumurty Sulapu.

The city’s Department of Buildings issued a full vacate order for the house on Monday and ordered the entire building to be sealed, according to an email from a DOB spokesperson on Tuesday.

The DOB also said it had taken enforcement action at the house in February 2020 for an unpermitted shed.

“The violation was resolved in March 2020,” according to the DOB. “There were no other recent complaints or violations.”

An inspection after the fire found that the building was properly occupied within the terms of its certificate of occupancy for a two-family house.