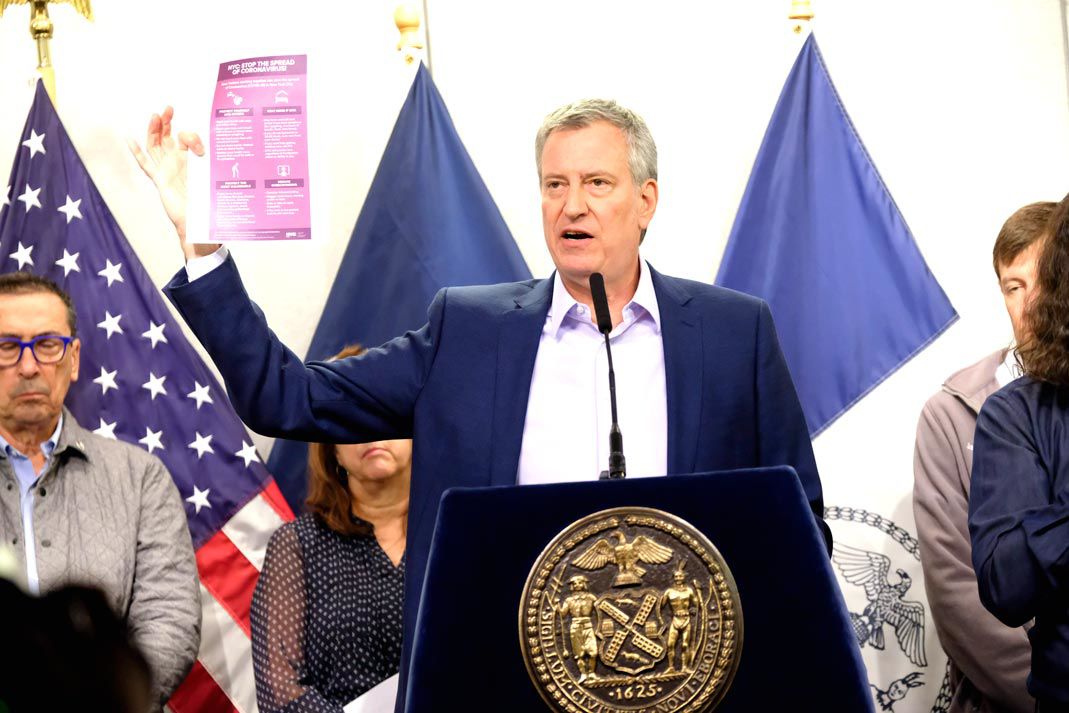 Mayor de Blasio reminds city residents of safe practices against the rapidly spreading novel coronavirus, stating that the biggest defense against the disease is one’s own precaution. 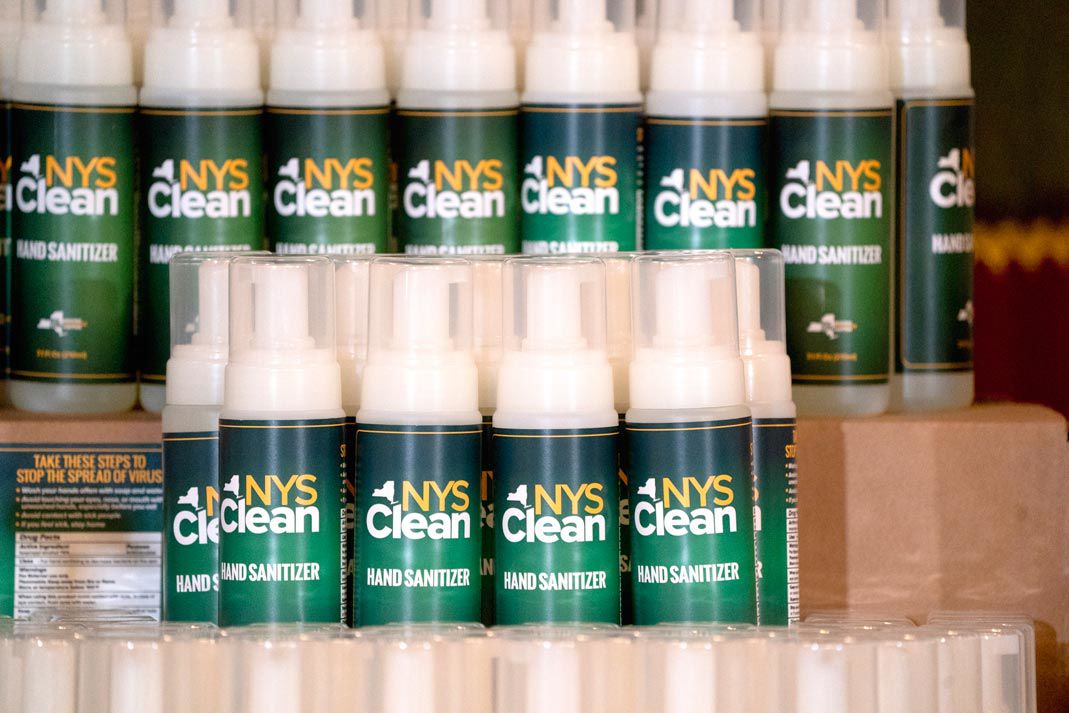 Gov. Cuomo announced the state is producing its own hand sanitizer.

Mayor de Blasio reminds city residents of safe practices against the rapidly spreading novel coronavirus, stating that the biggest defense against the disease is one’s own precaution.

Gov. Cuomo announced the state is producing its own hand sanitizer.

COVID-19 cases continue to rise on a global scale, prompting Gov. Cuomo to declare New York in a state of emergency on March 7, and the World Health Organization to declare the outbreak a pandemic on March 11.

Cuomo announced Wednesday afternoon that there are 216 cases in New York State, making it the state with the second-highest number of cases. Westchester County leads in case numbers, but New York City follows with 52, at least three of which are in Queens.

St. John’s University in Jamaica became the first Queens institution of higher learning to temporarily shut down in response to the rising cases of COVID-19.

“Let me report that there are no known cases of COVID-19 at this time on any of the St. John’s University campuses or locations. The safety and well-being of our students and the entire University community are of primary importance,” St. John’s President Dr. Conrado Gempesaw stated in a March 10 notice to faculty and staff, also posted to the university’s website.

The school suspended face-to-face instruction at all its locations “out of an abundance of caution” and “as an additional effort to keep our community healthy and assist with the containment of the spread of COVID-19,” though online instruction will continue until Friday, March 27. Additionally, all residential students with the ability to do so were advised to vacate the dorms.

A day later, Cuomo announced that city and state universities will follow the move to a “distance learning model,” or online classes, which he said in a tweet “will help us reduce density and reduce the spread of this virus,” beginning March 19.

Yeshiva Har Torah in Little Neck canceled classes after the assistant principal of the kindergarten through eighth-grade school, Rabbi Etan Ehrenfeld, contracted the coronavirus, according to a note sent to families late March 10.

On March 6, President Trump signed a sweeping bill to combat the rising cases of COVID-19, providing funding for federal public health agencies for virus testing and potential treatments, as well as to aid governments to prepare and respond to the threat.

Also included in the bill is a provision by Rep. Grace Meng (D-Flushing), along with Reps. Nydia Velázquez (D-Manhattan) and Judy Chu (D-California), to allow small businesses that have suffered economic losses related to the outbreak to access Economic Injury Disaster Loans up to $2 million to help meet financial obligations and operating expenses.

Under the Small Business Relief From Communicable Disease Induced Economic Hardship Act of 2020, the Small Business Administration would provide about $7 billion in loans to help companies that have suffered financially as a result of the novel coronavirus outbreak.

“It is critical that as we dedicate the resources needed to respond to the coronavirus outbreak, we do not forget about the many small businesses that have been negatively impacted,” Meng told the Chronicle. “Our hard-working small businesses drive our economy and enhance our communities; they are the lifeblood of our neighborhoods. We must assist them in their time of need so that they can continue to operate, and not further suffer from the downturn they have been forced to endure.”

A possible economic stimulus plan was discussed at a March 10 Capitol Hill strategy-planning lunch, but the event concluded without an agreement. The proposal by Trump involves a payroll tax cut designed to boost worker’s paychecks, legislation valued at more than $300 billion, according to reports from the Los Angeles Times.

The stock market has boomeranged in recent weeks, first experiencing a seven-day decline that turned out to be its weakest week since the 2008 financial crisis, mostly stemming from disrupted international trade and travel. After the disappointing week, the market surged 4.6 percent on March 2, the largest single-day climb since 2009, before stabilizing. On March 9, the market plummeted 7 percent according to The New York Times, putting it on track to experience its worst day since 2011. Trading was briefly halted in the morning due to the sudden drop. As of March 11, the market was on its way down once again.

“The stock market lives and breathes on stability and right now things are uncertain,” Queens Chamber of Commerce President Tom Grech told the Chronicle Wednesday. “I think there will be a big bounce back once we get through this thing, but we’re trying to figure out when it’s going to end. Fear and panic do not solve anything.”

Grech said that some Queens businesses, mostly small mom-and-pop stores, have seen 60 to 70 percent declines, a hit they will struggle to overcome.

“They can’t stand to go much lower ... Even with loan programs, they’re great, it’s tough to pay those kind of loans back. We’re encouraging our members to be cautious ... but we still have to eat, work, pay the bills.”

Price gouging of cleaning materials, medical supplies and basic necessities has been reported, such as a 12.5-oz. Lysol spray selling for $62.99 on Staples’ online store. In an effort to protect New Yorkers from paying for overpriced materials, Gov. Cuomo announced that the state will provide alcohol-based hand sanitizer to New Yorkers free of charge. The antiseptic is being made by Corcraft, the state Corrections Department’s manufacturing service fueled by inmate workers. It is 75 percent alcohol and has “a very nice floral bouquet.”

International travel screenings were implemented before COVID-19 made its way into the U.S., but Mayor de Blasio called upon the CDC in late February to expand its testing regimen for travelers beyond those coming out of China to travelers returning from any location that’s seen a major surge in cases, namely Hong Kong, Iran, Italy, Japan, Singapore, South Korea, Taiwan and Thailand.

On March 3, Cuomo announced that state college students in study-abroad programs in countries with high prevalence of novel coronavirus would come home.

The MTA announced on March 11 that in addition to sanitizing trains, stations and buses daily, its turnstiles, MetroCard and ticket vending machines and handrails will be disinfected twice a day with CDC-endorsed cleaning products. Tips for travelers on keeping clean and safe have been posted throughout the subway, bus and railroad systems in multiple languages, and the hours in which MTA employees can receive flu shots have been extended.

Despite initially stating the parade would go on, de Blasio canceled the annual St. Patrick’s Day Parade in Manhattan for the first time in its 250-year history, citing fears of indoor gatherings following the outdoor event.

Additionally, the annual Queens Greek Independence Celebration, scheduled for March 13 in Astoria was canceled to prevent further spread of the coronavirus.

I find it insane that District 75 is not closing during this crisis. At a minimum they should cancel the school trips (yes, I just heard DiBlasio speak & there was no mention of cancelling school trips). Between the buses, the immune compromised students, it's just a matter of time before someone gets it/dies. I just saw an email from NYSE that a school will close for 24 hours if someone is diagnosed. What a joke! This is going to run rampant and all the other things that are being done (shutting down sporting events, Broadway) will have been for nothing!