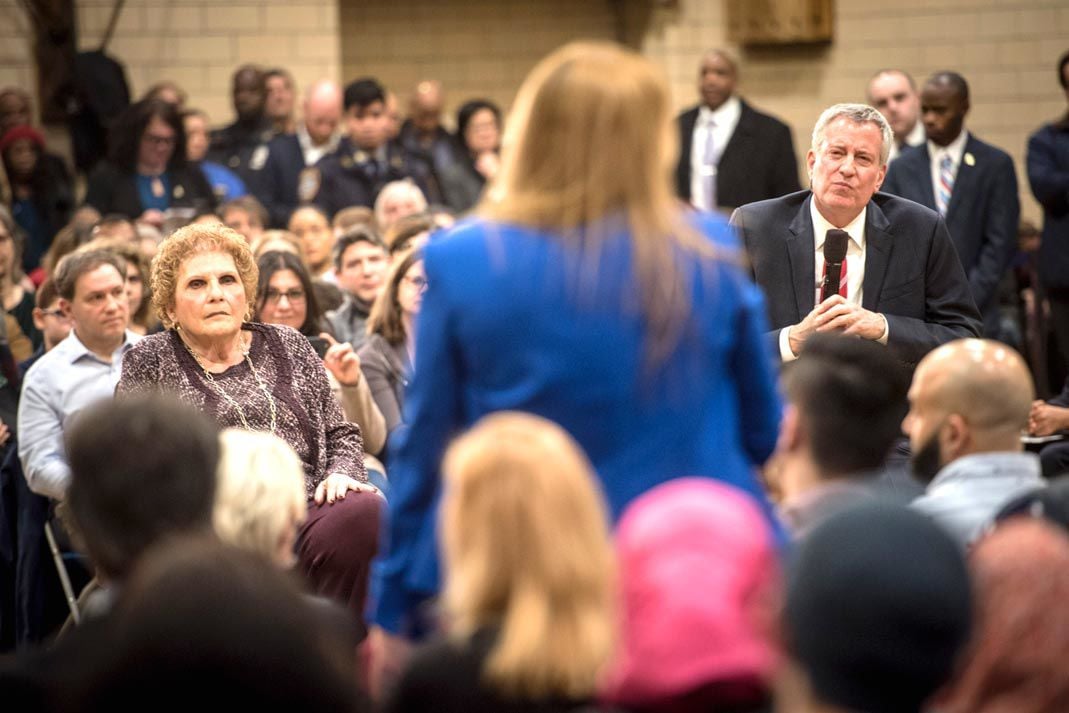 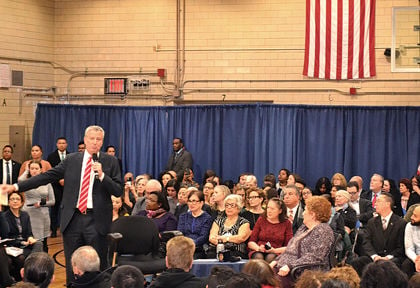 Mayor de Blasio addressed a variety of topics during a town hall discussion at Russell Sage JHS 190 in Forest Hills last Wednesday. Residents asked him about schools and crime, among other topics during the evening.

Mayor de Blasio addressed a variety of topics during a town hall discussion at Russell Sage JHS 190 in Forest Hills last Wednesday. Residents asked him about schools and crime, among other topics during the evening.

Toward the end of Wednesday’s town hall at Russell Sage JHS 190 in Forest Hills, one man told Mayor de Blasio, “You are the worst mayor that New York City’s ever seen.”

“How nice of you,” de Blasio said. “I’m sure you’re very proud of yourself.”

The speaker had questioned the mayor’s support of Schools Chancellor Richard Carranza, calling Carranza a “racist” before being escorted out of the standing-room-only meeting in the school’s gym.

De Blasio said Carranza has spent his life educating children, including in San Francisco, a city with a large Asian community. In New York, Asian-American families have been among the chancellor’s harshest critics, especially over his focus on ethnicity in the classroom.

“I just don’t accept this notion that because someone like Chancellor Carranza, who is trying to serve every child, does something someone disagrees with, then they call him a racist,” the mayor said. “That’s not fair. There’s no evidence of that whatsoever.”

Edwin Wong, president of the Forest Hills Asian Association, told de Blasio, “Many in the Asian community and the Asian-American community do not feel that the current chancellor has their back.”

De Blasio told Wong, “If you feel it, I can’t tell you ‘don’t feel something.’”

But the mayor did ask Wong to think about what would happen if the shoe was on the other foot.

“If you looked at Stuyvesant High School and it was 2 percent Asian and you thought there was a structural reason why, you would protest, rightfully,” he said.

De Blasio was also asked about the plan to diversify middle schools in District 28, including Forest Hills, Rego Park, Kew Gardens and Jamaica.

The Department of Education last week revealed the names of the working group that will write and approve the final diversity report. Community Education Council District 28 President Vijah Ramjattan asked de Blasio if he would “squash” the plan and start over with a working group made up of parents.

The mayor suggested a hybrid of the names already put forward with new ones.

“Let’s add whatever names we need to truly represent the different views in the community,” he said, adding that there is “no foregone conclusion.”

But, the mayor said, he wants the CEC to be on board.

“We don’t want it to move unless the CEC has bought into it,” de Blasio said. “It’s not a legal requirement but it’s the right thing to do.”

One parent said she was “excited” about the plan to integrate the schools, saying, “We all benefit from learning together.”

De Blasio responded, saying, “The more people get to know each other and their cultures, the more we overcome a lot of the divisions that still face us.”

He said the schools have a segregation problem as a result of decades and decades of economic discrimination.

“I believe the ideal is to maximize diversity because it’s not just about everyone getting the best education, it’s also about what it helps us do as a society,” de Blasio said.

Among other topics discussed during the evening were the Queens Boulevard bike lanes, the recently opened homeless shelter on Cooper Avenue in Glendale, the addition of school seats in the district and the Rego Park Library [see separate stories in some editions or at qchron.com].

The mayor also spoke about crime, saying New York is still the safest big city in America, as concerns have been raised following an increase in crime in January.

Another woman criticized de Blasio and Councilwoman Karen Koslowitz (D-Forest Hills) for backing the plan to close Rikers Island in favor of four borough-based jails, including one in Kew Gardens.

“I think both of you have no clue what goes on in regular people’s lives,” the speaker said.

She also voiced concern about how police officers allegedly are walking away from incidents targeting them, such as when water was being poured on them in occurrences last year.

“They don’t just walk away when someone breaks the law,” de Blasio said, calling the claim “right-wing propaganda.”

De Blasio is most definitely the worst Mayor NYC ever has had, yes I am proud of myself for speaking the truth.

I am saddened that we have to point out that he is the worst mayor the city has ever seen. Nothing to be proud of pointing that out. It is us who are suffering.