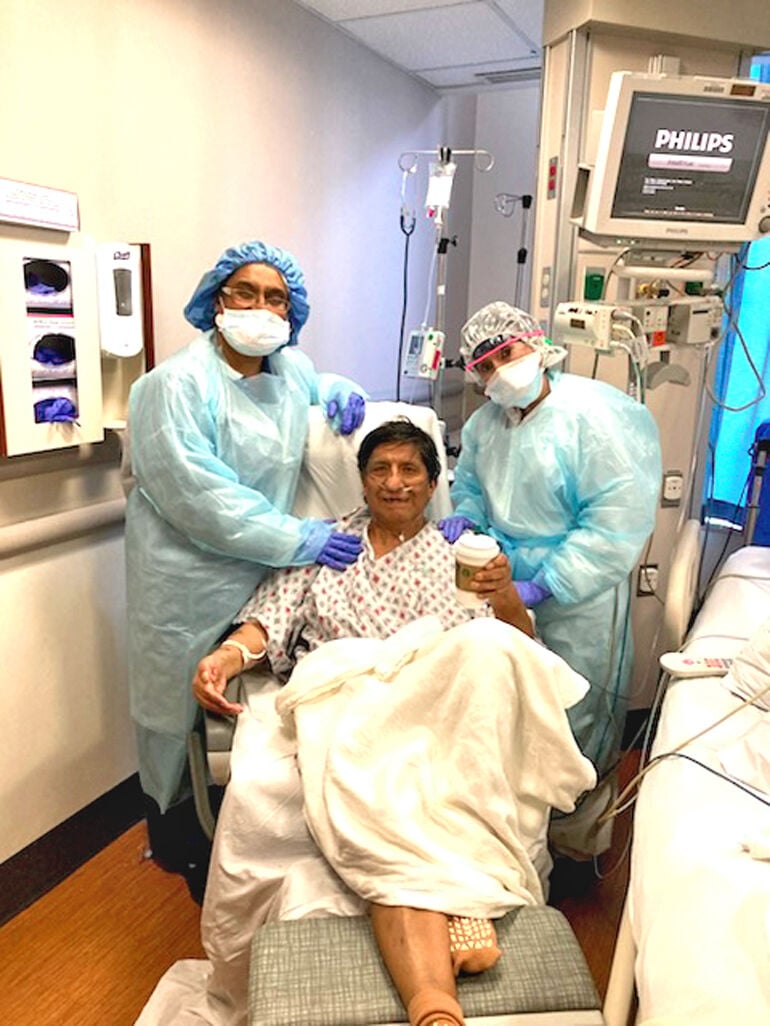 Franklin Diaz, center, developed a special relationship with his healthcare team during his 37-day stay at NewYork-Presbyterian Queens. He referred to his doctors and nurses as his “friends,” and they brought him his favorite drink, hot tea with milk, to cheer him up during his stay. 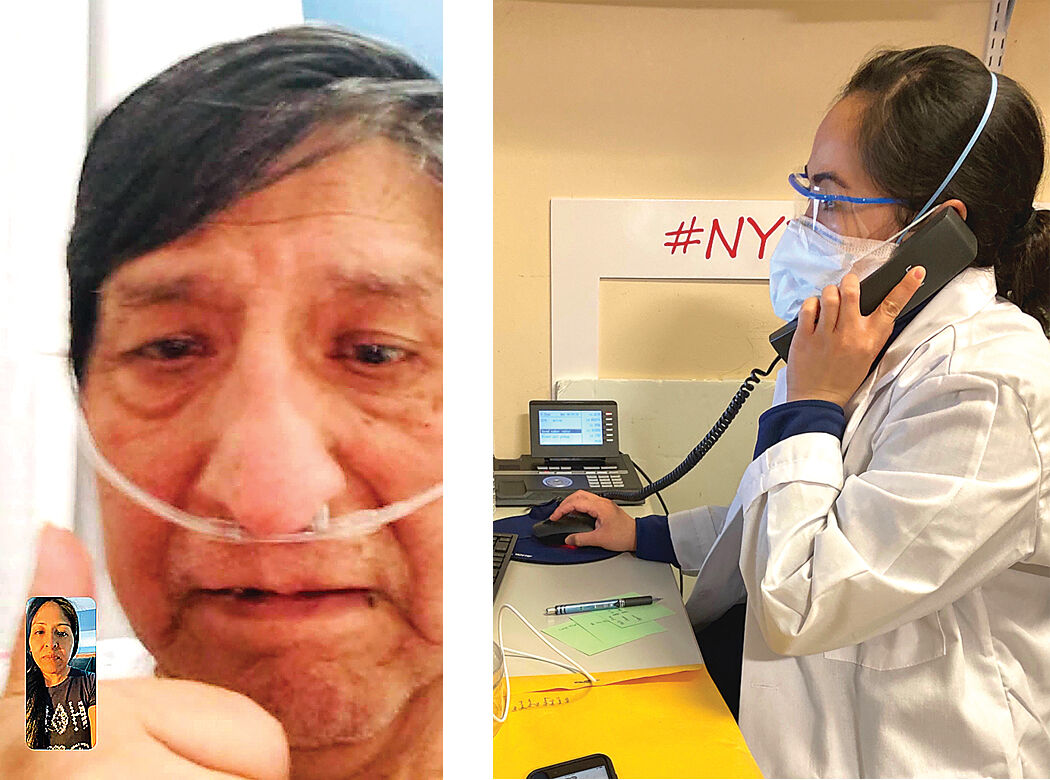 Claudia Diaz FaceTimed her father as much as possible during his stay, and received updates on his vitals from his healthcare team through a hotline. 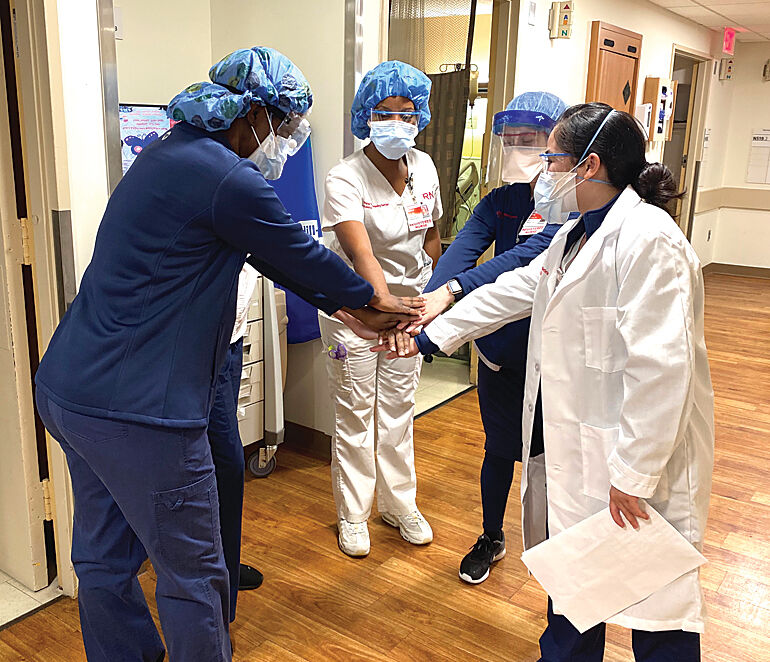 The NewYork-Presbysterian Queens healthcare team takes a moment to encourage one another before sharing their optimism with their patients.

Franklin Diaz, center, developed a special relationship with his healthcare team during his 37-day stay at NewYork-Presbyterian Queens. He referred to his doctors and nurses as his “friends,” and they brought him his favorite drink, hot tea with milk, to cheer him up during his stay.

Claudia Diaz FaceTimed her father as much as possible during his stay, and received updates on his vitals from his healthcare team through a hotline.

The NewYork-Presbysterian Queens healthcare team takes a moment to encourage one another before sharing their optimism with their patients.

Franklin Diaz of Corona never admitted he was sick, so his daughter knew he was in bad shape when he called her at 8 a.m. on April 11 and told her he was taking himself to the hospital. Franklin, who had underlying heart conditions and a blood disorder, was having difficulty breathing, but was certain he just had an extreme case of the common cold. Twenty minutes after Claudia hung up the phone, a doctor from NewYork-Presbyterian Queens called her back to tell her they were admitting her father into the emergency room with a case of pneumonia. Not long after, it was determined that Franklin had COVID-19.

“I spoke to him every morning as much as he could ... the third day I said, ‘How are you doing?’ but he said he was tired, ‘I got to go,’ and he hung up,” Claudia said of the moments before her 68-year-old father was put on a ventilator. Claudia, who lives in Florida, relied on FaceTime and telephone calls to stay updated with her sick father from thousands of miles away. “Not knowing what could happen, him being by himself, having that space between both of us was nerve-racking. My connection to him was the phone, and now I have nothing.”

Claudia and her brothers, who also live outside New York, and cousins from South America took to assembling virtually every evening at 7 p.m. to pray for Franklin. Claudia would also take the opportunity to report her father’s vitals to the group, which she kept in a notebook next to the telephone. She utilized NewYork-Presbyterian’s hotline for COVID patient families and sought updates every three hours, but she said she gained the most pertinent information when nurses would take the time to call her, sometimes twice a day, to talk about how Franklin was doing as they conducted their last round.

“One nurse stood out ... Jonathan — he called me and said, ‘I’m your dad’s nurse and your dad needs to hear your voice,’” Claudia recounted, choking up at the memory. Jonathan held out the phone toward her unconscious father so Claudia could offer him words of encouragement and a quick prayer.

Franklin would spend approximately 30 days on the ventilator. During that month, and with the help of his healthcare team, a sleeping Franklin was afforded the opportunity to hear over 2,000 voice recordings of family members and loved ones offering their prayers and hopes for recovery in the same way his daughter had.

“Having those nurses go beyond the call of duty was beyond amazing and then every day I would get follow-up calls to let me know how he was doing,” said Claudia. “I can’t pay them enough. You could say, yes, it’s their job, but they did far more than their job. They took care of him.”

When Franklin was finally taken off the ventilator, he was on heavy medication, had lost somewhere around 40 pounds and “didn’t look like himself.”

“He’d ask me if I were there and if I were coming to see him,” said Claudia on his confusion upon waking up.

At times, recovery seemed dim and the typically optimistic Franklin seemed hopeless that his health would return. He struggled to do breathing exercises, particularly with the incentive spirometer, a machine that required Franklin to lift small balls by breathing into a tube to test his lung strength.

As days passed, Franklin slowly made physical progress. He soon switched from a liquid diet to solid food and after much practice, his lungs grew strong enough to push the balls on the machine, which he proudly showed his daughter over FaceTime. Claudia noticed her father was making real headway when he called her one day with a giant smile on his face.

“He didn’t even say hello. He just lifted a Starbucks cup of hot milk and tea and said, ‘My friend bought it for me,’” Claudia said. “He was so happy. It’s his favorite drink, and that’s a connection to home — having your special drink that’s not available in the hospital. Someone had to bring it to him. I thought it was a nurse that did that amazing gesture for him.”

A few days later, Franklin called his daughter again to introduce her to the friend who brought him his favorite drink. Claudia was surprised to find that he was one of his doctors.

“We were, as a group, extremely ecstatic because he was one of our earliest success stories and we were just very proud of him,” said Dr. Benjamin Lee, the hospital’s chief of thoracic surgery who was reassigned to work with Franklin at the height of the pandemic. The healthcare workers and patients established a bond during their long time together, which they displayed through small acts of appreciation, such as a cup of tea with milk. Franklin returned the favor by waving, smiling and offering two thumbs up for each worker who passed by his window.

“He was one of the shining lights for us. He gave us hope that we could save others as well because there was a lot of loss ...We were very protective of our patients we were able to extubate,” said Lee.

Franklin was a patient at NewYork-Presbyterian Queens for 37 days before he was released to a rehab facility, where he learned to walk again and gain back the weight he had lost during his time on the ventilator. Claudia flew up to meet her father upon his release and the two reconnected in-person on Fathers’ Day.

“Imagine not having family around and having this awful virus, but the doctors making this practically your home,” said Claudia. “It’s important that despite all of this sadness there are happy moments and my dad is a happy moment ... there’s a light if you keep hope and faith, and I think that’s what kept us going, having that faith. He did and he fought and he’s now walking and hopes to go back to work in September.”