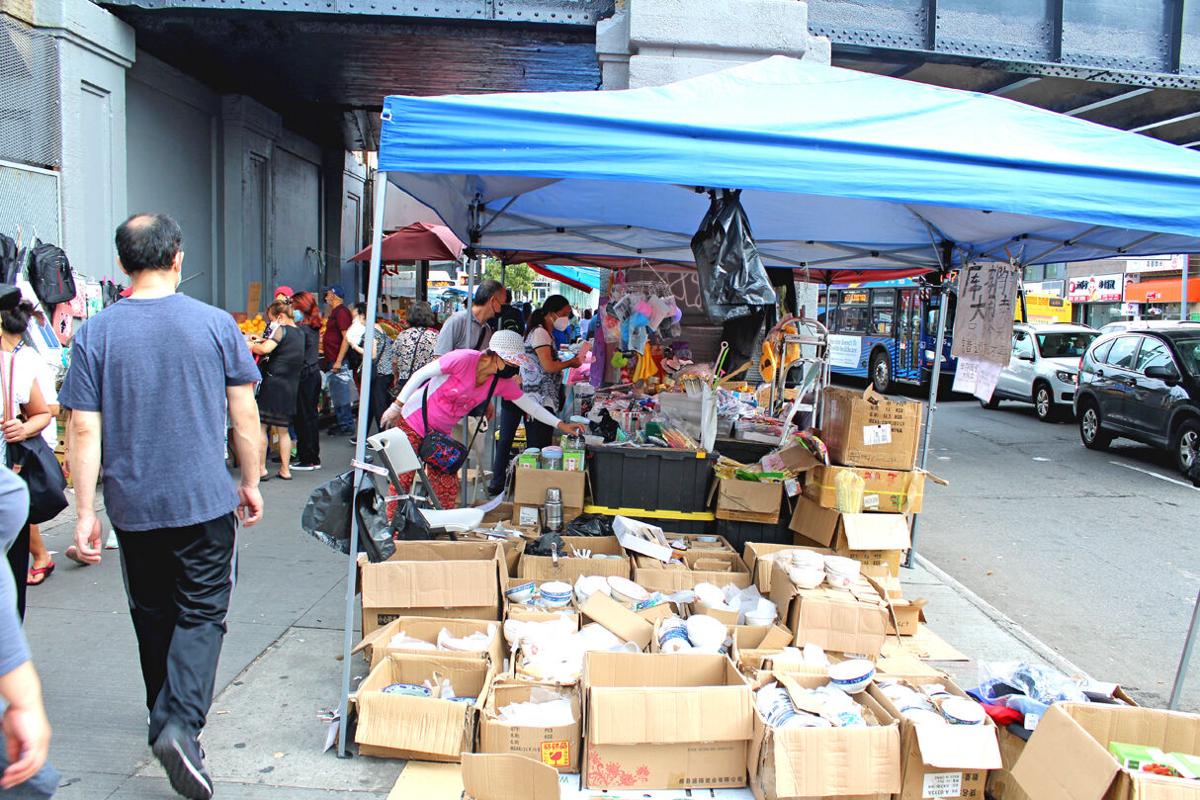 An area of Downtown Flushing busy with street vendors is under the bridge near the Flushing Library and the Main Street subway station. Under a new law, the city will issue 445 new food vending permits each year for 10 years beginning in July 2022. 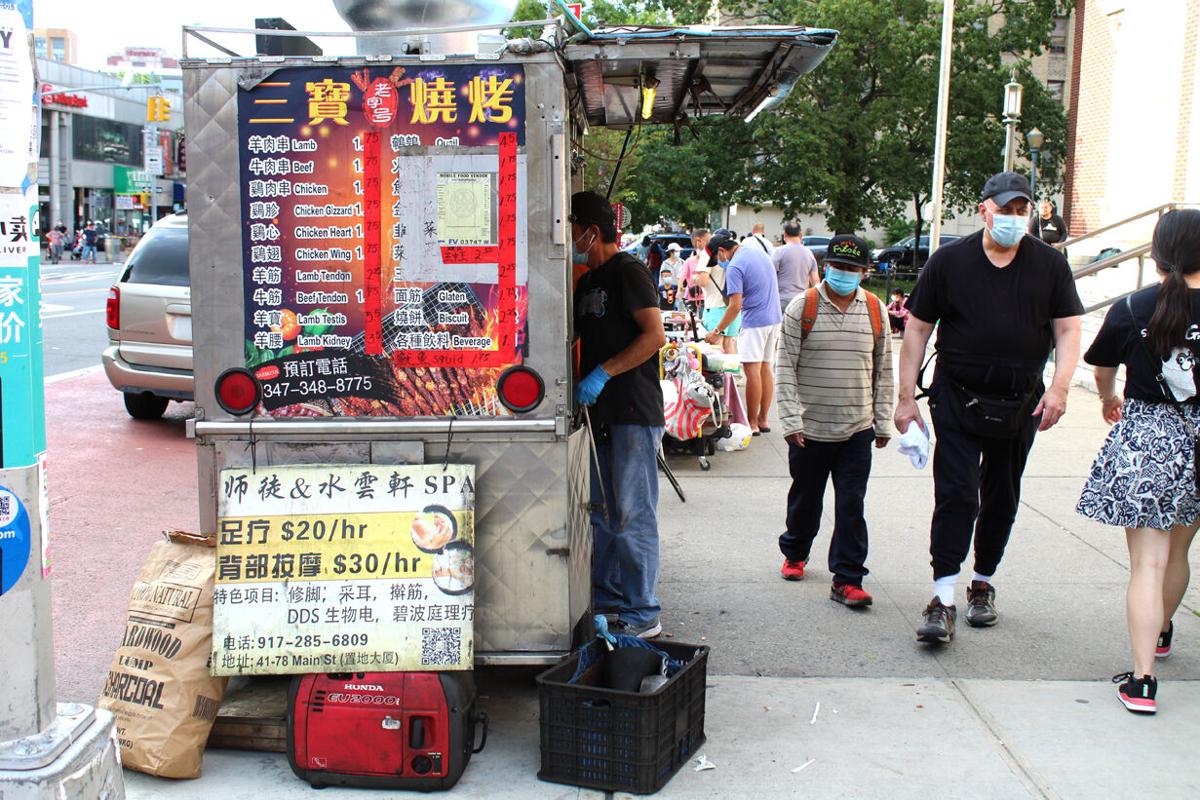 A food truck, regulated by the city Department of Health. Leaning against this vendor’s cart is a board advertising a spa. 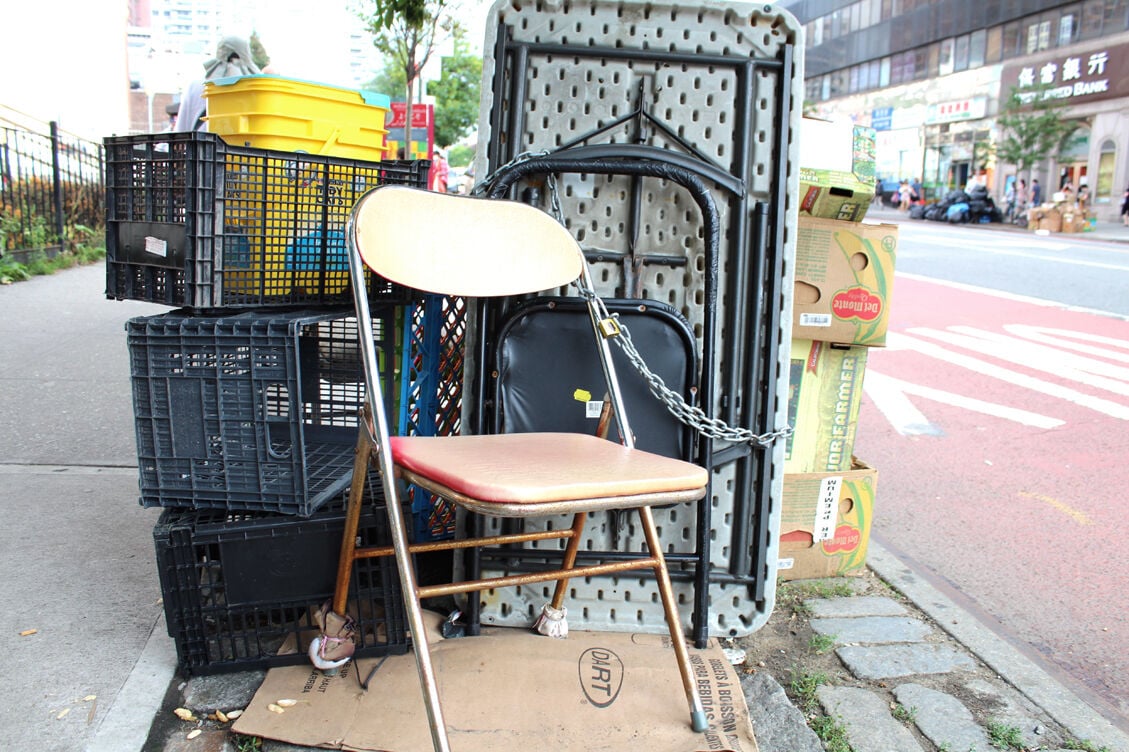 Vendor supplies are chained to a tree on Main Street. 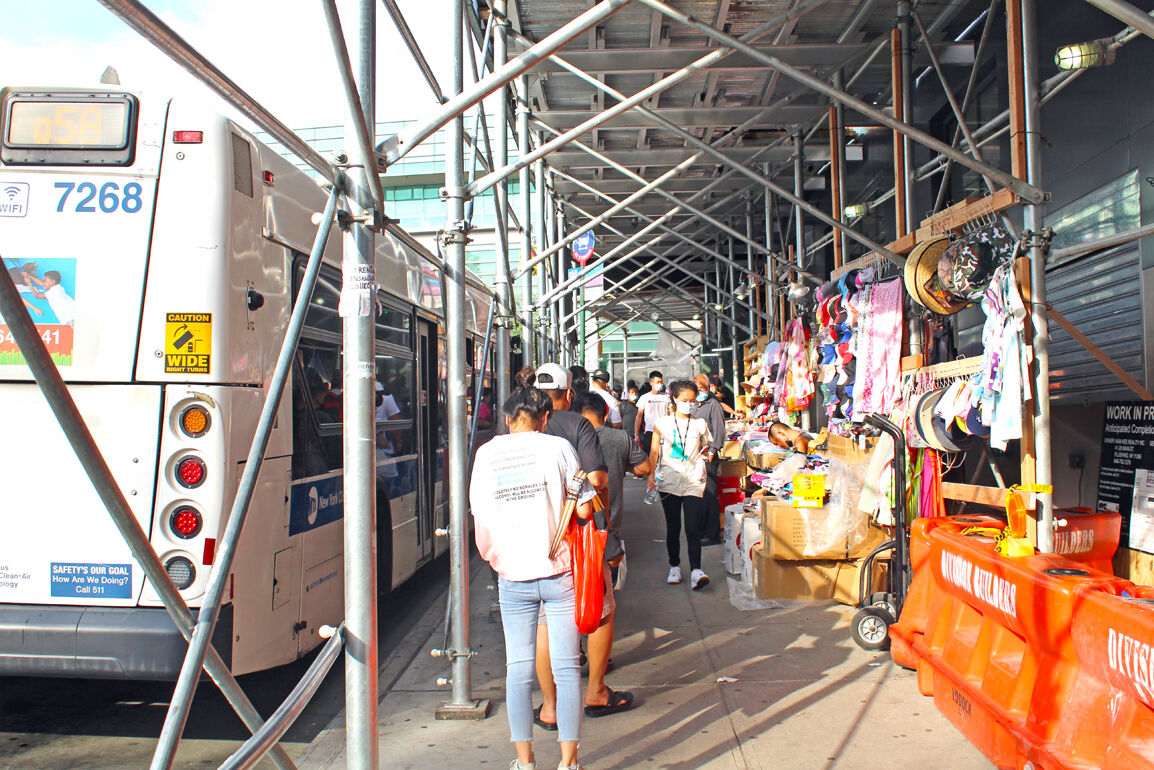 Crowds at bus stops in Flushing must maneuver around tables set up for street vendors in some areas. 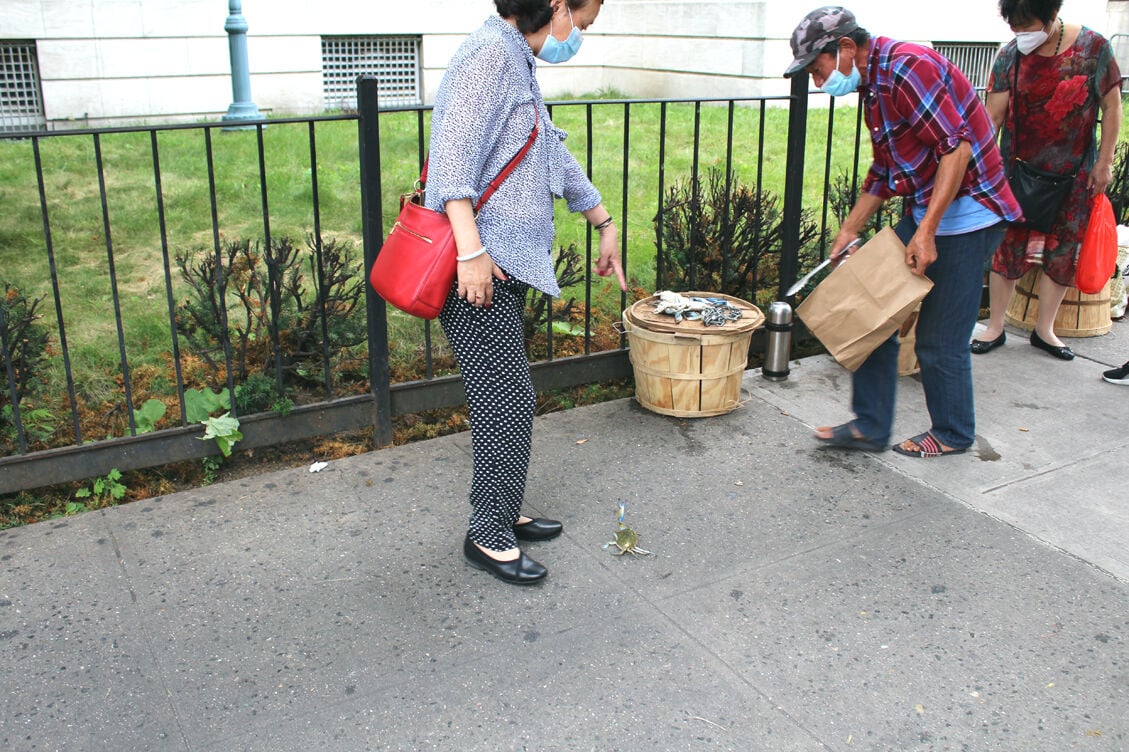 A street vendor selling live crabs at Sanford Avenue and and Main Street has to capture an escapee on the sidewalk.

An area of Downtown Flushing busy with street vendors is under the bridge near the Flushing Library and the Main Street subway station. Under a new law, the city will issue 445 new food vending permits each year for 10 years beginning in July 2022.

A food truck, regulated by the city Department of Health. Leaning against this vendor’s cart is a board advertising a spa.

Vendor supplies are chained to a tree on Main Street.

Crowds at bus stops in Flushing must maneuver around tables set up for street vendors in some areas.

A street vendor selling live crabs at Sanford Avenue and and Main Street has to capture an escapee on the sidewalk.

Chris W. sells socks, combs and gua shas, the self-care tools, for $5 to $10 around Main Street and 39th Avenue in Flushing on most days, but sometimes the crowds and loud noises give him headaches. The retired Army veteran, originally from China, was injured while training at Fort Riley in Kansas in the Explosive Ordnance Disposal Battalion. He came back to New York and started selling items on the street because it was the only work he could manage.

It is not just about the money, he said. “I try to talk to people,” said Chris, who did not want to share his full name. “I don’t want to isolate myself. Going outside, fresh air, talking to people. ... I feel happy, that’s important.” His doctor said it was better than going to the park alone, which he would often do.

He was only able to get a vendor license because he is a veteran. The waitlist is currently closed but there is no cap for vets.

According to the city Department of Consumer and Worker Protection), the maximum number of vendor licenses is capped at 853. The only people who can apply are those with a valid waitlist number, honorably discharged veterans living in New York, and their spouses or domestic partners.

Chris sets up away from the busy area around the Flushing Library and Main Street subway station.

“If I go to Main Street, I definitely have more [customers] but it’s too noisy,” he said.

Aside from the noises, Chris also said that he is bothered by those who sell counterfeit items, like Gucci bags. “People need to earn money to make a life, but I think that’s not the right story,” he said.

“It’s still cheating,” he said. “I see some people — they sell their secondhand stuff, I do understand that.” He said he also understands that many people started selling because of the Covid-19 pandemic. Many do not have licenses, said Chris, but neither the police nor the DCWP has checked his in the last year.

The agency has begun enforcement, though. Since June 1, the DCWP said, it has conducted 255 inspections in Queens, issuing 126 violations in the borough and 56 in Flushing. Fines for unlicensed vending ranged from $250 to $1,000 plus $250 for every day of continued unlicensed vending. Unlicensed food vendors can be fined from $150 to $1,000 and other food-related violations can cost $25 to $50.

The Office of Street Vendor Enforcement was established as part of the DCWP in March and is expected to be fully operational by September. According to a DCWP spokesperson, the agency currently has 12 employees “dedicated to conducting vending inspections” and is in the process of doubling the staff.

Many local officials say the enforcement does not go far enough and contend that the streets, especially in Downtown Flushing, are overcrowded with vendors.

“It’s not just about the competition for stores, but also the crowding between bike lanes and Citi Bikes and obstructions on the street, including outdoor dining,” said Tom Grech, president and CEO of the Queens Chamber of Commerce. “Sidewalks are being totally overcrowded. It’s not really conducive for a nice shopping or eating environment.”

Councilman Peter Koo (D-Flushing) walks to his office in Downtown Flushing and gets lunch in the area. “When I walk, people always complain to me. They say, ‘Councilman, what happened?’ The whole street is turning into an open free market. It’s like a street fair every day,” said Koo.

In 2016, Koo announced and helped fund a project to widen the sidewalks around Main Street and has since introduced legislation to limit vendors in certain areas of Downtown Flushing.

“If there could be some kind of location or a gathering space where they could all congregate, we would support that, if it was a feasible location,” said Sieber. “Downtown Flushing is a geographically difficult place for those kinds of gatherings.”

A woman named Zhang operates the Uncle Wang BBQ Express truck on the corner of Bowne Street and Roosevelt Avenue in Flushing. She explained that there is no designated spot for her to sell her traditional Chinese barbecue skewers and if she does not get to her usual corner in time, a car may already be parked there. It can be hard to have regular customers without a guaranteed spot, she said, with translation from Rui Li, an organizer for the Street Vendor Project, a group of over 1,800 vendors fighting for better working conditions.

“As a small business, you want to be somewhat in a permanent place. If you’re always moving, people won’t be able to find you,” said Li.

Li said that Zhang received tickets before the pandemic but has not been fined recently and has been fortunate enough to support herself and her family with the food truck business. She would eventually like to open up a storefront and bring that “taste of home” to her community. She said it contributes to the diversity of the city and she wants people to vend without added burdens.

“A lot of our vendors have been subject to fines and harassment and it’s a heavy blow to their already precarious financial status,” said Li. “What we are calling for is to stop the fines and let vendors be part of a just recovery for the city. If they get slapped with a thousand dollar fine, how are they supposed to pay that?”

She said that they want to abide by the rules, but it is hard since there is no legal way to obtain a license right now.

In January, the City Council voted to create 4,000 new permits for street vendors over the next decade and create a separate law enforcement unit for oversight. Previously, the NYPD handled enforcement and recent crackdowns in the Bronx prompted a letter from the Street Vendor Project and area officials criticizing Mayor de Blasio for “going back on his word” to no longer involve the police.

Koo said the reason he voted in favor of the new bill was not for lifting the cap but for that separate enforcement unit. Prior to that, too many agencies were responsible for the different aspects of street vending, said Sieber, including the NYPD, the Department of Sanitation, the Department of Health and the Department of Transportation.

Sieber said that their office received a complaint from a constituent whose wife bought live crabs off the corner of Sanford Avenue and Main Street, got sick and had to go to the hospital. Her husband opened up the crabs and found worms, said Sieber.

“When you don’t have oversight over these kinds of activities, that’s the kind of risk that you’re up against,” he said.

Grech of the Chamber of Commerce said he was not “thrilled” by the idea of more vendor licenses because of the “unfair competition” that poses to the stores.

“I have very little belief that the city will come through with the promised enforcement. Adding thousands of more licenses over the next few years will not be helpful to the brick-and-mortars that are still struggling,” he said.

A DCWP spokesperson said in an email, “Our goal is to hear concerns from everyone involved and strike a balanced approach that is equitable for all, which includes ongoing education coupled with scaled, strategic enforcement, especially in problematic areas.”