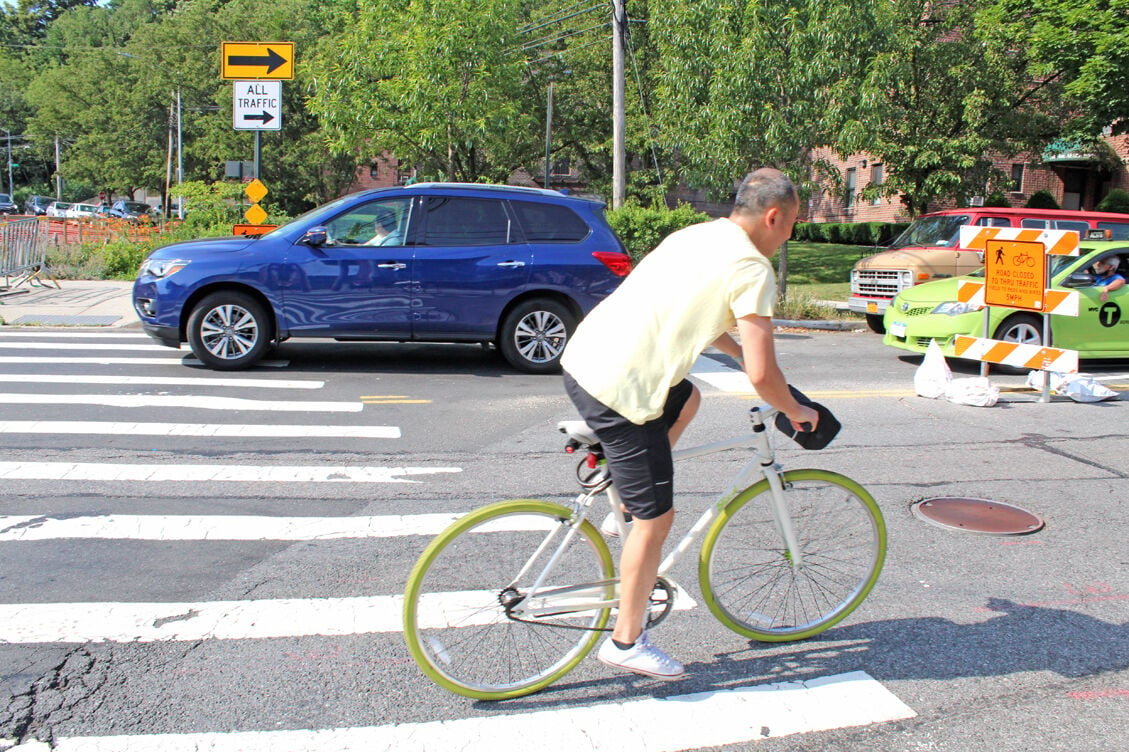 The city is looking to turn 39th Avenue in Sunnyside, now part of the Open Streets program that shuts it to most motor vehicle traffi c, into a “bike boulevard” that would do so permanently. Many support the idea, but there is resistance, as seen at last week’s online Community Board 2 meeting. 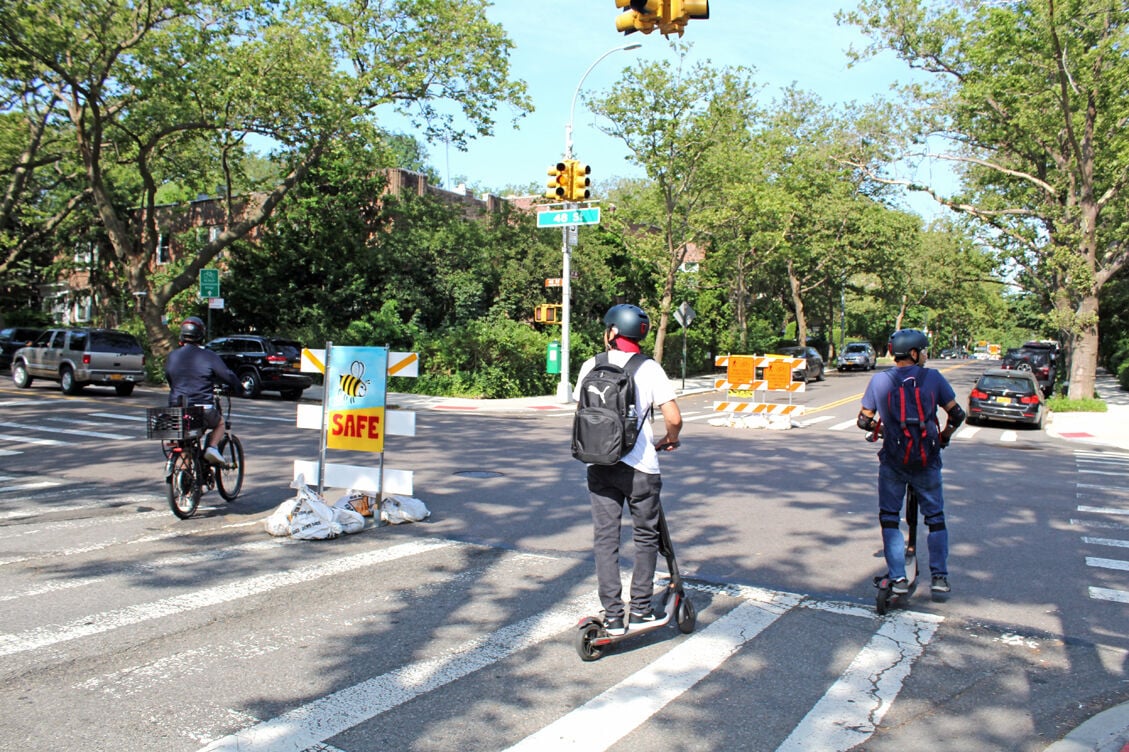 Travelers check for crossing traffic on 39th Avenue in Sunnyside. A proposal by the city’s Department of Transportation is aimed at giving them more peace of mind and less potential for encountering vehicular traffic.

The city is looking to turn 39th Avenue in Sunnyside, now part of the Open Streets program that shuts it to most motor vehicle traffi c, into a “bike boulevard” that would do so permanently. Many support the idea, but there is resistance, as seen at last week’s online Community Board 2 meeting.

Travelers check for crossing traffic on 39th Avenue in Sunnyside. A proposal by the city’s Department of Transportation is aimed at giving them more peace of mind and less potential for encountering vehicular traffic.

All were on display June 23 during a marathon Zoom meeting of Community Board 2 during which the city’s Department of Transportation presented its vision for turning 39th Avenue in Sunnyside between Barnett and Woodside avenues from an open street to a bike boulevard.

Gretha Suarez, a planner at the Queens office of the DOT, said the change is part of Mayor de Blasio’s plan to create a bike boulevard out of an existing Open Street in every borough. It will involve lane and structural changes, rerouting, one-way streets and other measures aimed at improving bicycle and pedestrian safety on the roadway.

It also is designed to use 39th as a link between existing bike lane networks, according to Craig Baerwald, operations manager for the DOTs Bicycle Program.

“This is a traffic-calming project,” he said.

And a bullet point in the slide presentation said the proposal will “prioritize cyclists and pedestrians ...”

Among the proposed changes are:

• converting Barnett to a one-way northbound beginning at 45th Street;

• converting 39th to a one-way westbound from Woodside Avenue to 52nd Street;

• eliminating some turns and traffic conflicts by making 39th a one-way westbound between 45th and 47th streets.

Members of the cycling community — including residents who live on or near 39th, supported it as a safety improvement as well as making it easier for commuters who choose to use their bicycles.

Speaking during the public comment portion, Alexander Zamudio, a 12-year resident of the neighborhood, said the city first identified the street for possible bike use decades ago.

“This plan is phenomenal,” he said. “This is a neighborhood street and it should be for neighborhood traffic, not a shortcut to Northern Boulevard.”

Phil Leff, speaking from a room in his home with a window that overlooks 39th Avenue, said he would welcome a reduction in vehicular traffic.

Board Chairwoman Lisa Deller, on the other hand, said the proposal would make things “an obstacle course” for neighborhood car owners just looking to head east or west.

When she asked how a driver could make one particular trip that right now just means driving east along 39th, Baerwald said one could simply turn left on 49th Street, take it north to Northern Boulevard and head east to Woodhaven Boulevard, where the driver could turn right and head back south,

“That would be a disaster,” Deller said.

Others said the plan threatens to change the character of the neighborhood.

Suarez and Baerwald said any plans would have to be crafted with the approval of the FDNY and other emergency service agencies. They also said the changes would not eliminate parking spaces for residents, though Suarez said planners would have to consider a resident’s request for specified loading zones for businesses that depend on the corridor.

Questioned by a parent about the number of school buses that use 39th, and the traffic that would, under the plan be diverted north toward existing schools and one being built on Barnett, Baerwald said the DOT would “keep an eye on it.”

“Why aren’t you keeping an eye on it now?” another parent demanded.

During the presentation there also was a running battle between competing factions in the Zoom chat section.

Most consisted of people backing fellow supporters of their positions, while some engaged in debate. Some portions were confrontational. Others would have been deemed inappropriate for an in-person meeting or a family newspaper.

Pick your battle: young vs. old; drivers vs. cyclists; longtime Sunnyside residents vs. “newbies.” - So, I'm old, both a driver and a cyclist, lived in Sunnyside for over a half century. My pick = thumbs up for safety, neighborhood peace zone.