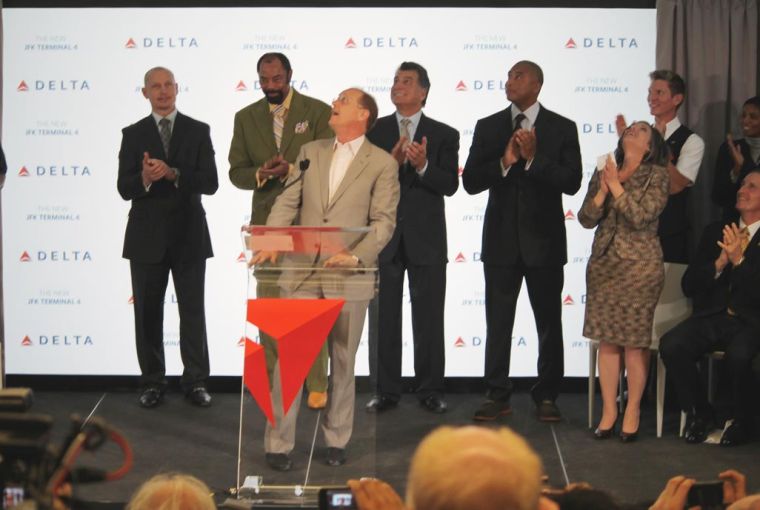 Notable New York athletes Adam Graves of the Rangers, left, Clyde Fraser of the Knicks, Keith Hernandez of the Mets and Bernie Williams of the Yankees, joins Delta CEO Richard Anderson at the grand opening of the airline’s new Terminal 4 hub at JFK. 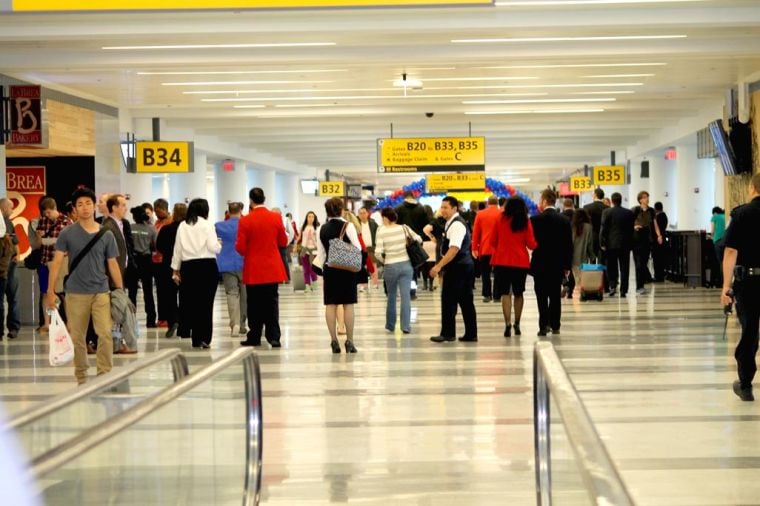 The inside of Delta’s new Terminal 4, which opened last Friday, replacing the old Terminal 3 Worldport building that once housed Pan Am.

Notable New York athletes Adam Graves of the Rangers, left, Clyde Fraser of the Knicks, Keith Hernandez of the Mets and Bernie Williams of the Yankees, joins Delta CEO Richard Anderson at the grand opening of the airline’s new Terminal 4 hub at JFK.

The inside of Delta’s new Terminal 4, which opened last Friday, replacing the old Terminal 3 Worldport building that once housed Pan Am.

With a cavalcade of notable people and an avalanche of blue and red balloons, Delta Airlines officially opened its JFK Airport gateway at Terminal 4 last Friday, just in time for the summer flying season.

Delta CEO Richard Anderson welcomed elected officials, sports stars and heads of foreign airlines, including Virgin’s Richard Branson, to Gate B41 at the end of Delta’s renovated and extended Concourse B — which at some points seems to look more like a mall than an air terminal — for the ceremonial grand opening.

“We are excited to be here and to be in New York,” Anderson said, adding JFK will be one of the airline’s major international hubs.

“We want people who come to the United States to come here through this airport and this city,” said Rep. Greg Meeks (D-Jamaica).

“It’s projects like this that are bringing good jobs to this city,” Mayor Bloomberg remarked. “Over the past six years, Delta has doubled the number of employees based at JFK and created quality construction jobs, with a focus on local hiring and priority to minority- and women-owned business enterprises.”

Representing Gov. Cuomo was Lt. Gov. Bob Duffy, who noted that he flew into JFK that morning from Albany on a Delta flight.

“I’m not only here as the lieutenant governor,” he said. “I’m also a customer.”

Rep. Joe Crowley (D-Queens, Bronx) noted the work Delta is also doing at LaGuardia Airport on the other side of Queens.

“I’m here representing JFK’s little brother across the borough at LaGuardia, which is in my district,” he said. “We are thrilled with the improvements Delta is doing over there.”

The new Terminal 4 at JFK was the first phase of Delta’s $1.4 billion project at the airport, which includes nine new and seven renovated international gates; improved and renovated check-in areas, including a dedicated Sky Priority check-in area; an enlarged and centralized security checkpoint; new retail and dining options from some of New York’s most well-known chefs; and a new, 24,000-square-foot flagship Delta Sky Club with the first-ever Sky Deck rooftop terrace.

The new concourse also includes a number of duty-free shops and restaurants, including a Shake Shack.

Phase two of the Terminal 4 redevelopment plan, which began Friday,will include an additional 11 gates on Concourse B.

Upon completion of that phase in summer 2015, Concourse B will house a total of 27 Delta gates to serve mainly short-haul regional flights. Currently, Delta bases all those flights out of Terminal 2.

The new extension means the end of the airline’s two-decade occupancy of Terminal 3, the famed Worldport building that was built in 1960. That terminal, which was the main international hub for Pan Am from the 1960s until the airline’s demise in 1991 and was the first terminal to serve the Boeing 747 aircraft, is expected to be demolished by 2015. Terminal 3 officially closed for good Friday morning.

Terminal 2, which was built in 1962, will also close for good after the completion of phase two of the project.

The new Terminal 4 is part of a massive multidecade renovation and reorganization at JFK, which included new terminals 1, 5, and 8 — that latter two for JetBlue and American respectively, the demolition of Terminal 6, a renovated international arrivals facility at Terminal 4 as well, and the construction of the AirTrain, which opened in 2003.