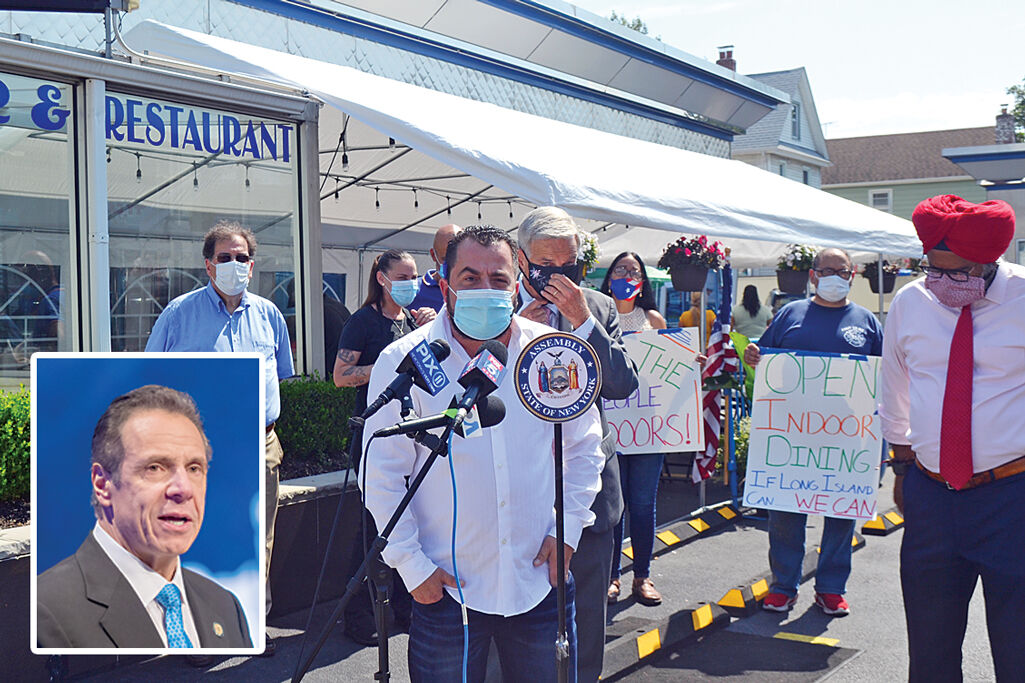 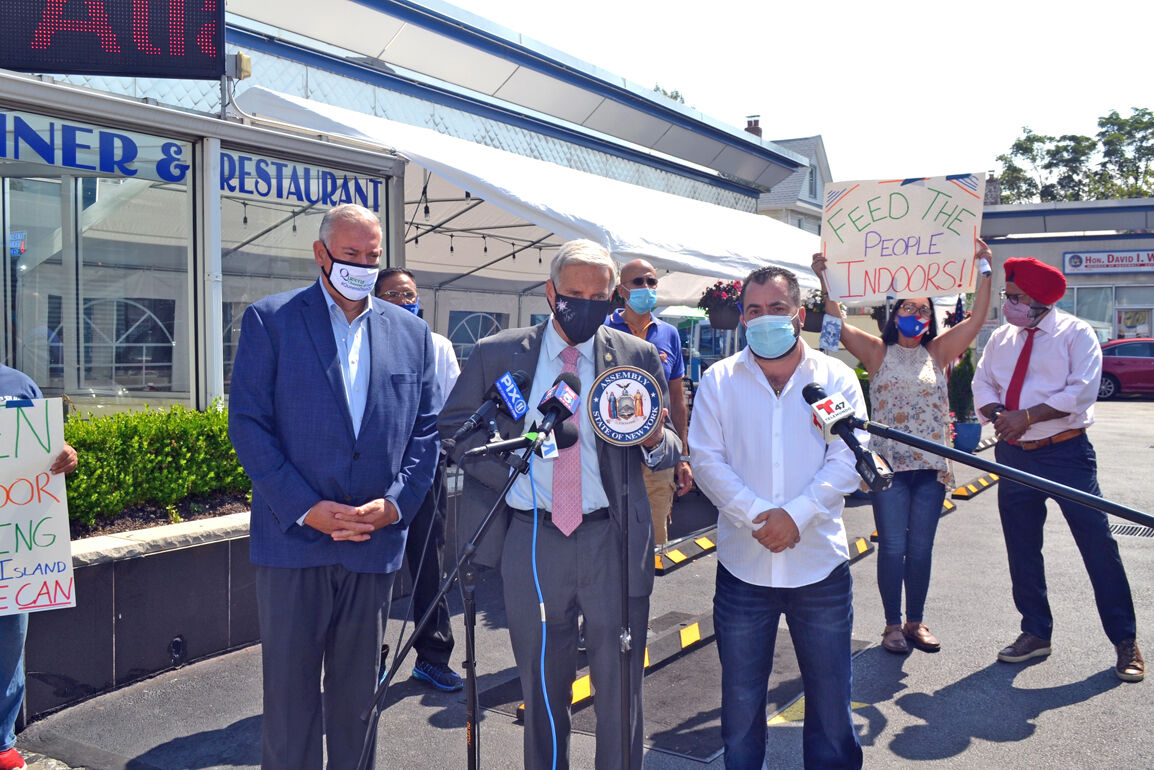 Tom Grech, left, president and CEO of the Queens Chamber of Commerce, Assemblyman David Weprin and John Athanasopoulos, owner of the Atlantic Diner in Richmond Hill, on Tuesday called for plans to allow indoor restaurant dining to start up.

Tom Grech, left, president and CEO of the Queens Chamber of Commerce, Assemblyman David Weprin and John Athanasopoulos, owner of the Atlantic Diner in Richmond Hill, on Tuesday called for plans to allow indoor restaurant dining to start up.

Gov. Cuomo on Wednesday announced that COVID-19 restrictions which had been in place since March would be lifted, bringing the city in line with the rest of the state, where restaurants have been open under strict capacity limitations since June.

City restaurants will have mandated social distancing and personal protective equipment for diners and restaurant staff.

Cuomo, in a media event on Wednesday, thanked New Yorkers for making the next step possible.

“We’ve been speaking with stakeholders, and we are now announcing that we can safely reopen indoor dining in New York City with limited capacity at the end of this month, as long as they adhere to strict health and safety protocols,” Cuomo said in a statement issued by his office. “This is good news and the right step forward, especially for restaurant owners and staff who have been struggling through this time. But it is up to all of us to ensure compliance and the health and safety of those around us.”

• Temperatures will be checked at the door for all customers;

• one member of each party will be required to provide contact information for tracing if needed;

• there will be no bar service — bars will only be used as a source of making drinks and serving them tableside;

• masks must be worn at all times when not seated at a table;

• tables must be six feet apart;

• restaurants must close at midnight;

• testaurants should operate with enhanced air filtration, ventilation and purification standards; and

• restaurants must limit air recirculation and allow for outside air ventilation.

The city also will provide a team of 400 enforcement personnel to work with a State Police task force designed to ensure compliance.

The Governor’s Office said guidelines will be reassessed based on data by Nov. 1. Should infection rates not increase, restaurants could be permitted to go as high as 50 percent occupancy.

Should testing in the city reach the 2 percent positive level the rules will be reassessed immediately.

“Working with the state and public health officials, we’ve achieved a plan that puts health and safety first by including strict capacity limits, a close monitoring of citywide positive testing rates and a coordinated inspection regimen,” Mayor de Blasio said in a statement.

“Science will guide our decision-making as we continue to monitor progress and health care indicators over the next three weeks to ensure a safe reopening. This may not look like the indoor dining that we all know and love, but it is progress for restaurant workers and all New Yorkers.”

Tom Grech, president and CEO of the Queens Chamber of Commerce, has been one of the more vocal critics of the indoor dining ban in recent weeks, particularly after restaurants in the adjoining counties of Nassau and Westchester began opening within sight of shuttered city eateries.

On Wednesday he said businesses are calling New York’s announcement a win.

“Finally, some common sense has come into the equation,” Grech said Wednesday during a telephone interview. “And using science that we have been using all along, New York City restaurants can now open. We are totally thrilled, as this was long overdue. Twenty-five percent on Sept. 30 is just fine with us.”

Like Grech, Andrew Rigie, executive director of the NYC Hospitality Alliance, believes the move is necessary to save struggling restaurants.

“The New York City restaurant industry has been financially devastated by the COVID-19 pandemic and a safe return to indoor dining is critical to help save these vital small businesses and jobs,” he said in an email to the Chronicle. “We’re thankful to Governor Cuomo for announcing a return to indoor dining with a blueprint for future expansion. Restaurants are essential to New York’s economic and social fabric, and indoor dining is a key component to the industry’s recovery.”

Grech’s comments came a day after he stood with Assemblyman David Weprin (D-Fresh Meadows) at a press conference outside the Atlantic Diner in Richmond Hill, where they joined owner John Athanasopoulos in calling for the city and state to reach some sort of agreement on regulations allowing city restaurants to reopen for limited indoor dining.

Athanasopoulos said while takeout traffic and the outdoor seating in his parking lot have helped a little, they were not enough for him to keep his entire staff employed.

Grech said Tuesday that without some immediate form of relief, up to 3,000 Queens restaurants might not be able to survive as long as 45 more days.

Last week the owners of Il Bacco, an Italian restaurant in Little Neck, filed a $2 billion class action lawsuit naming Cuomo and de Blasio, among other parties. They hoped to attract more than 300 other businesses to sign on.