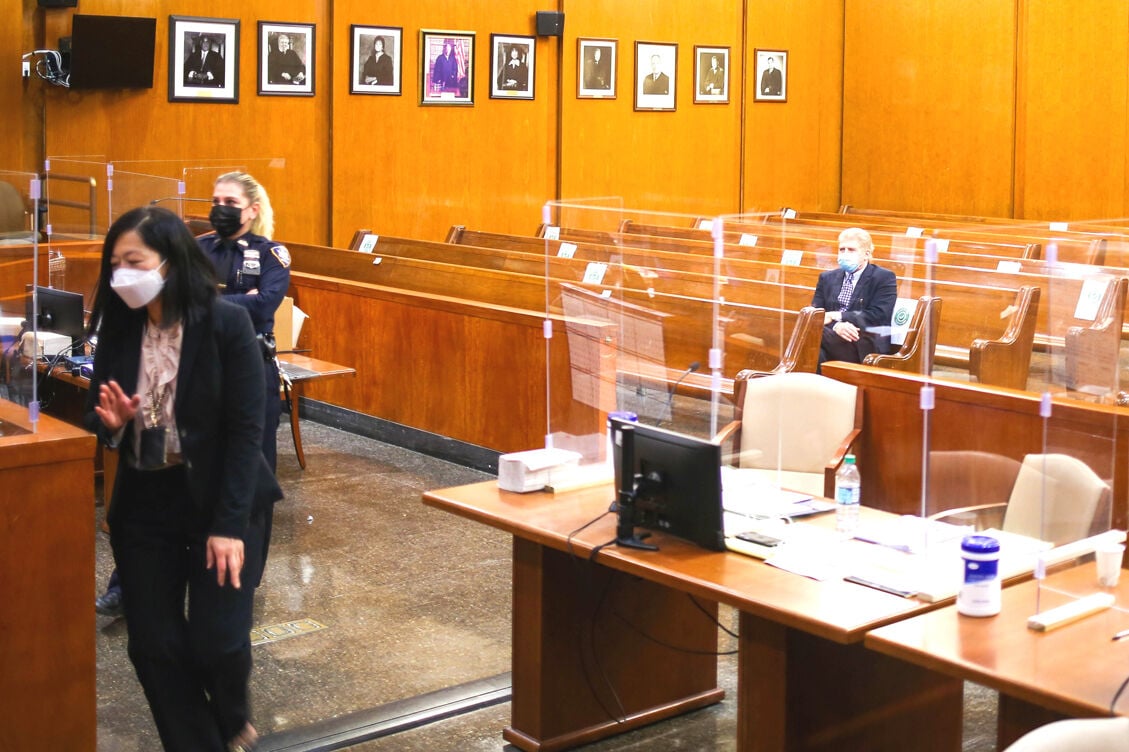 When trials resume, jurors will be seated, spaced out, on the left section of what would normally be the area for the courtroom’s audience. 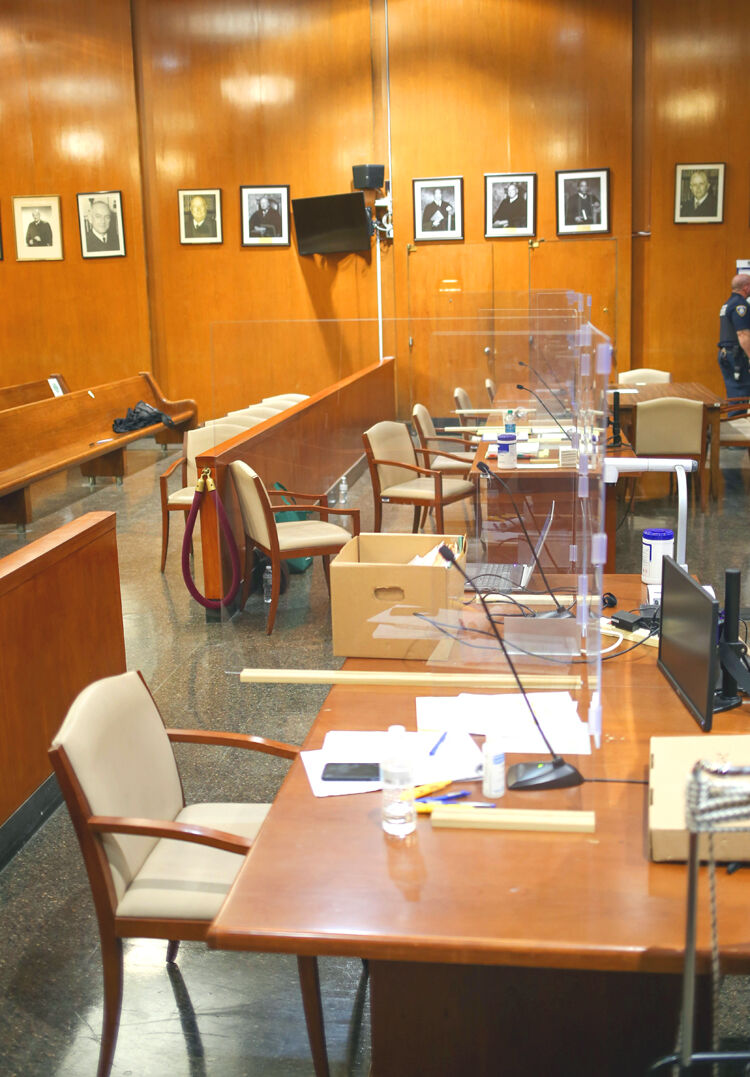 At right, the prosecutor’s table and the defense table behind it. 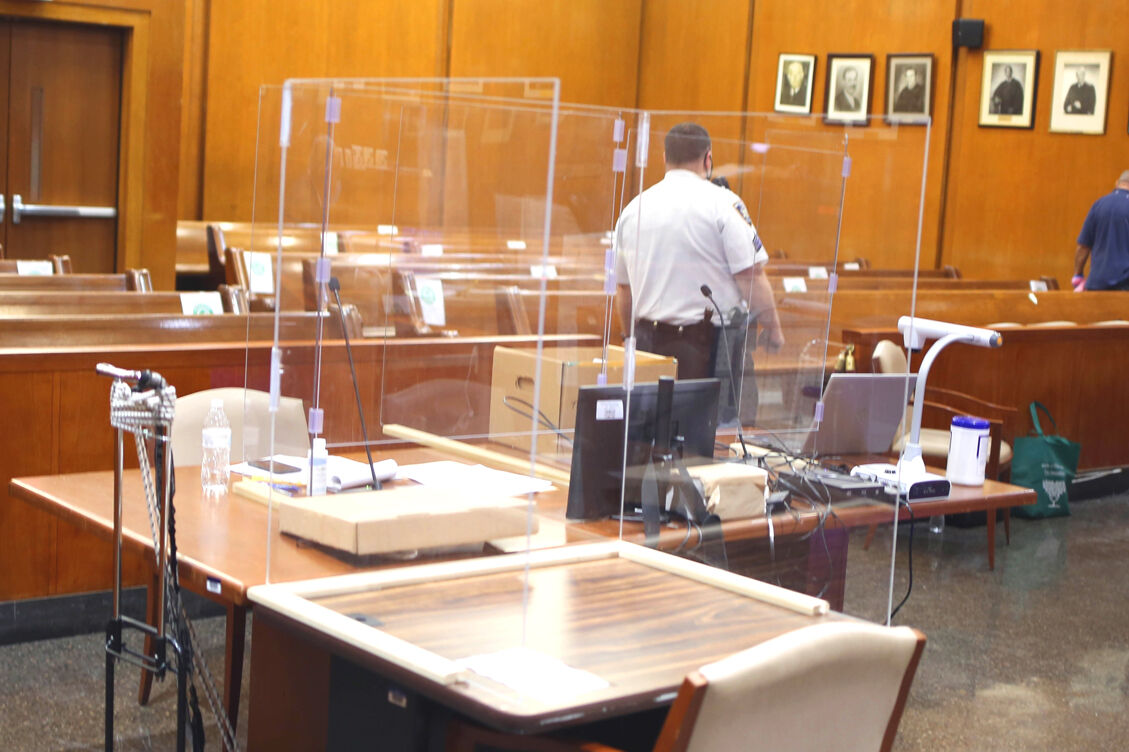 An officer behind the prosecutors’ table during a break in the first case tried in a Queens courtroom since March. 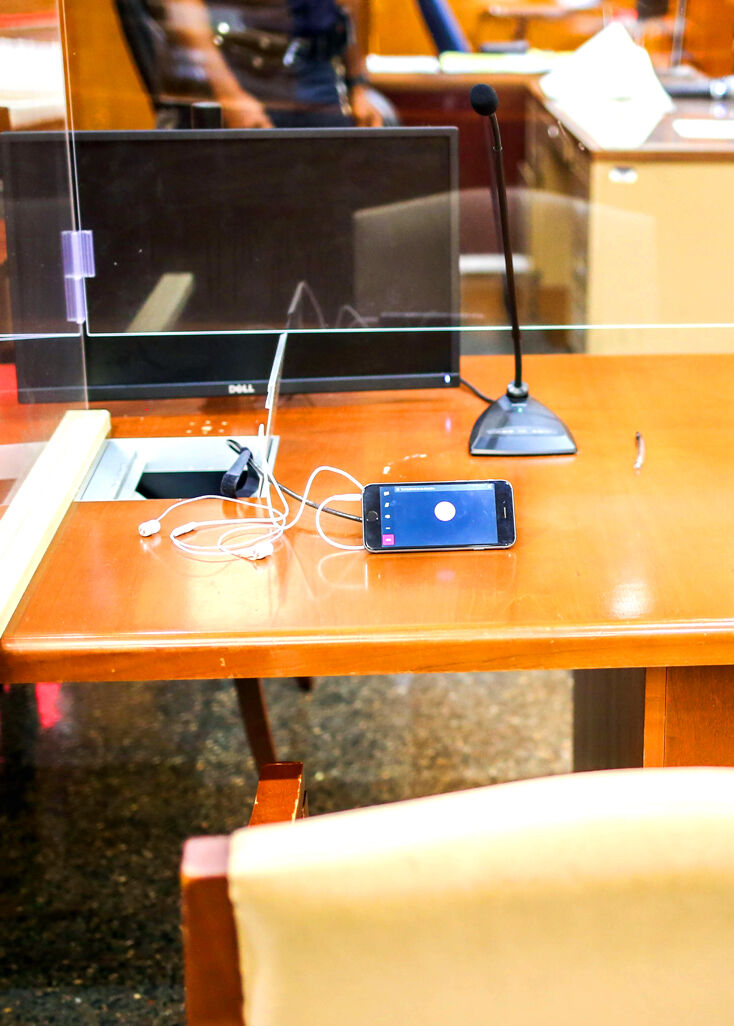 A cell phone hooked to a closed circuit system allows the defendant to text message his lawyer instead of speaking face to face. 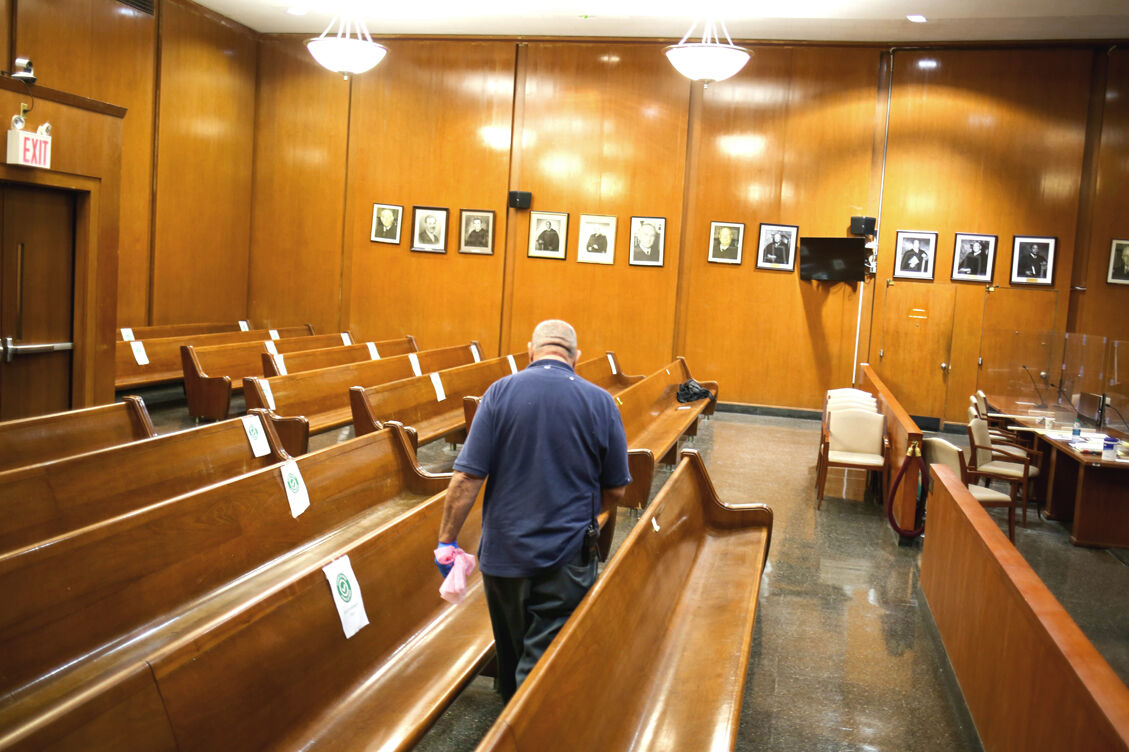 A custodian with a spray bottle disinfects jurors’ seats during breaks. But courtrooms have again been shuttered due to the new surge in the virus.

When trials resume, jurors will be seated, spaced out, on the left section of what would normally be the area for the courtroom’s audience.

At right, the prosecutor’s table and the defense table behind it.

An officer behind the prosecutors’ table during a break in the first case tried in a Queens courtroom since March.

A cell phone hooked to a closed circuit system allows the defendant to text message his lawyer instead of speaking face to face.

A custodian with a spray bottle disinfects jurors’ seats during breaks. But courtrooms have again been shuttered due to the new surge in the virus.

For the first time in eight months, a jury last week began hearing evidence at a criminal trial in Queens.

The case is a fairly routine burglary — a 33-year-old man accused of sneaking through an open window of a Springfield Gardens home in 2018 and fondling a woman sleeping there.

That is about the only thing routine about the State of New York v. Robert Harris.

The Harris trial was intended to be the first test of new and far-reaching changes that have been made to traditional trials to prevent jurors, defendants, lawyers and courtroom personnel from contracting the Covid-19 virus.

In his opening argument, the defense lawyer began by thanking jurors for their “historic participation in this case.”

Then, on Friday, the day after the trial began, the state put the brakes on future jury trials as part of its latest push to restrict public gatherings.

Under the new restrictions, the only trial currently underway in Queens will be permitted to conclude. But no new jurors will be summoned or empaneled until further notice.

Until then, here’s a look inside the first jury trial in Queens since last March and how much the justice system was overhauled to accommodate the pandemic:

To maintain social distancing, 12 regular jurors and five alternates have been seated, not in the jurors’ box, but in the audience of the courtroom behind the prosecutors’ table.

Everyone in court, including Judge Ira Margulis, must wear a mask. In order to see the jury and the judge at the same time, lawyers and Harris position their chairs sideways.

Plexiglas partitions separate the defendant, Harris, from his attorney, Michael Anastasiou. The witness stand is closed in on three sides by Plexiglas, as are the prosecutor’s and stenographer’s tables.

A cell phone with a closed-circuit connection is set upright at the defense table. It allows Harris to send text messages to his lawyer seated next to him without leaning over to whisper face to face.

Under a pretrial agreement, the defendant will not have to remove his mask when the woman he is accused of groping is asked by the prosecutor later in the trial to identify him from the witness stand.

Jurors’ temperatures are taken upon entering the courthouse and they must answer a series of questions about how they are feeling and where they’ve been.

Shortly before noon on the trial’s opening day, Margulis declared what he called a “mask break.”

“The attorneys have to breathe a little bit,” he told jurors.

After the jury was ushered out, a custodian appeared from behind the judge’s bench and sprayed disinfectant on their seats.

Also out of the ordinary was the appearance of Melinda Katz, the Queens district attorney, seated in the back row to observe the trial’s first day.

In earlier times, a garden-variety trial such as this would not have commanded the attention of the borough’s top law-enforcement officer for a full morning.

Prosecutors in Queens and elsewhere in the city have been pushing since last summer to start in-person trials again.

Starting last spring, the city’s justice system has been operating remotely over video hookups for bail hearings and other routine proceedings. Cases that could not be resolved with plea bargains were starting to clog court calendars.

On the other side, defense lawyers have, for the most part, been outspoken about reopening the courts before the pandemic subsides. Lori Zeno, executive director of the public defenders agency in Queens, has called it “reckless.”

“I asked for a one-week delay in this trial after the most recent spike,” Anastasiou told the Chronicle during a break. “But here we are. Let’s see if we can finish.”

The Harris trial is effectively a test run for procedures and protocols for operating the courts during the pandemic. If they work, court officials hope for a return to business once the latest spike subsides.

In the Bronx, however, the first jury trial got off to a unpromising start. Two weeks ago, a judge there called a halt after one day when four court officers tested positive for the virus, a spokesman for the Office of Court Administration confirmed.