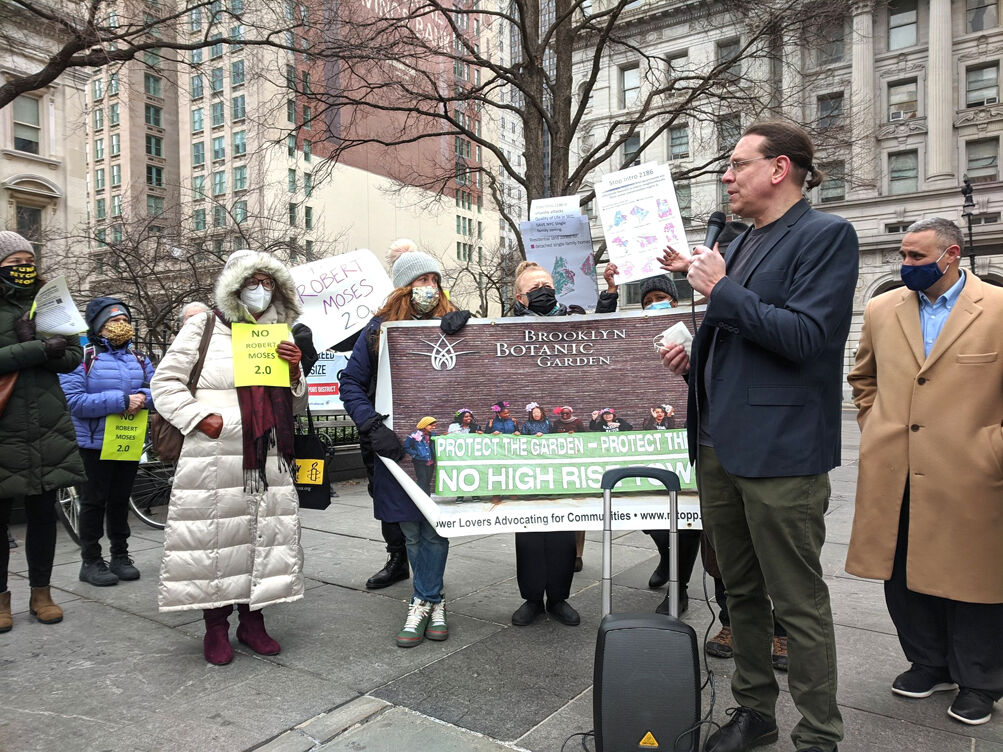 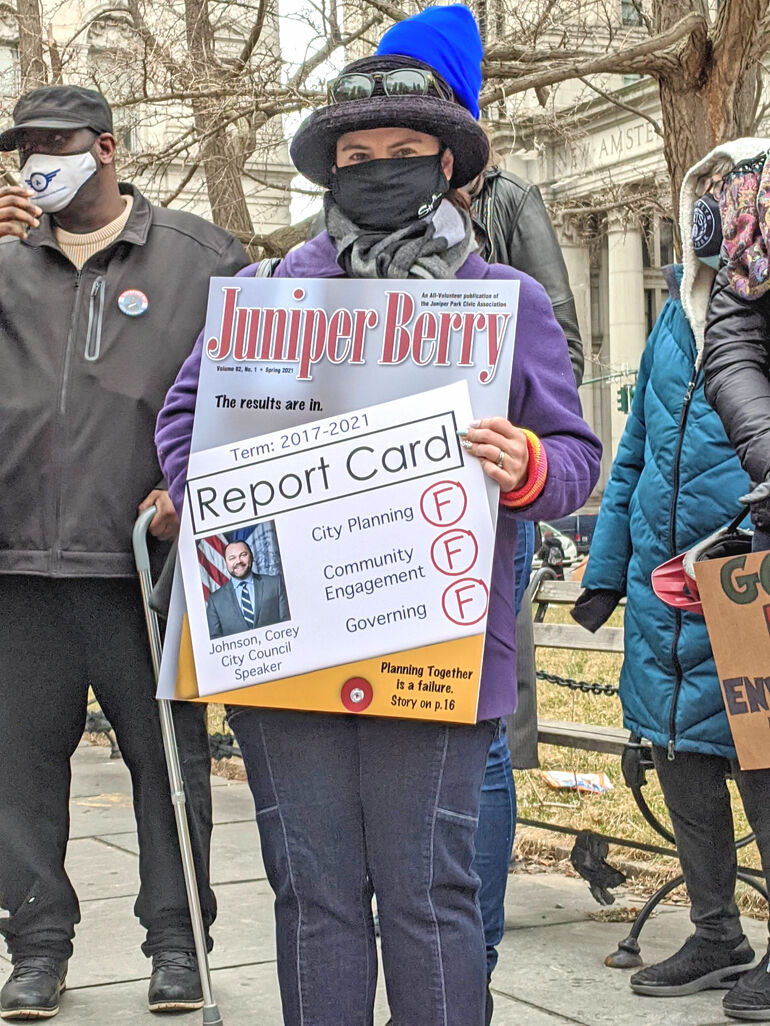 A protester gives Speaker Corey Johnson an “F” for Planning Together.

A protester gives Speaker Corey Johnson an “F” for Planning Together.

Dozens of passionate virtual discussions and presentations culminated in a March 16 protest at the foot of City Hall, where concerned community leaders implored elected leaders to reject a massive proposed comprehensive plan.

The 54-page comprehensive planning report accompanying the bill includes a framework to correct neighborhood disparities and disinvestment in communities of color. Among other recommendations, the proposal would create a Long-Term Planning Steering Committee to advise on issues and adopt citywide targets for infrastructure.

Graziano, who had worked on rezoning portions of the city under the Bloomberg administration, has been testifying at community boards and civic associations that the plan is not as community-minded as it presents itself to be. He believes the plan takes power away from community boards, would end councilmember deference, would upzone neighborhoods frequently and could lead to the elimination of single-family zoning.

The bill itself does not suggest eliminating single-family zoning, but the study does reference a case study of Minneapolis in which it was ended. Johnson’s team maintains Planning Together does not propose implementing the policy in New York City, but only included the connection to illustrate the ways comprehensive planning can be leveraged to achieve citywide goals, a spokesperson told the Chronicle.

As he stood before signs reading “Community Planning — yes. Top Down Control — no.” and “No Robert Moses 2.0,” Graziano said the plan’s largest red flag was its emphasis on housing over other city infrastructure. The idea of comprehensive planning, he explained, is to tie all aspects of life together, such as parks, open space, hospitals, social services, support for small businesses and more.

Graziano stated his concern that the plan’s requirement that districts achieve their targets every 10 years would result in allowing taller and denser buildings into communities.

“It will bake these upzonings every 10 years in every community board whether you’re the dense Upper East Side or the lowest -density areas in Queens or Staten Island or Brooklyn or even the Bronx. It’s going to be a perpetual development machine,” he said.

Director of the Department of City Planning Marisa Lago came out against the proposal at a Feb. 23 Council hearing, saying it would be too expensive and lessen the city’s own power by implementing bureaucratic obstacles. Lago’s concerns echoed those that community boards had been raising for several weeks: that the proposal would strip them of their voices concerning development and its effect on neighborhood character.

“There’s no togetherness in Planning Together,” Paul DiBenedetto, president of the Bayside Historical Society and Community Board 11 member, said at the protest. “If you want to plan together — if you want to have comprehensive planning — you involve all these people behind me and their communities. You don’t do it top down.”

DiBenedetto called the plan a “Trojan horse”: a giveaway to real estate developers under the disguise of increasing affordable housing.

His community board, as well as boards 7, 8, 9 and 13, penned letters to the city and Johnson in opposition to Planning Together.

“And I’ll tell you what — you can’t polish a turd. This bill is a turd. So let’s get rid of it. Let’s do some real planning,” said DeBenedetto.

In the face of growing opposition, Johnson remains adamant that his plan would give stronger power to city residents and a louder voice in development. A spokesperson pointed out that member deference cannot be eliminated, as Graziano claimed, because it is a common practice by councilmembers rather than law.

At the protest, City Council candidates for districts 19 and 26, respectively, Austin Shafran and Emily Sharpe, along with Brooklyn candidates Victoria Cambranes and Anthony Beckford, pledged to stop the plan from being implemented and repeal it if necessary if they are elected to the chamber.