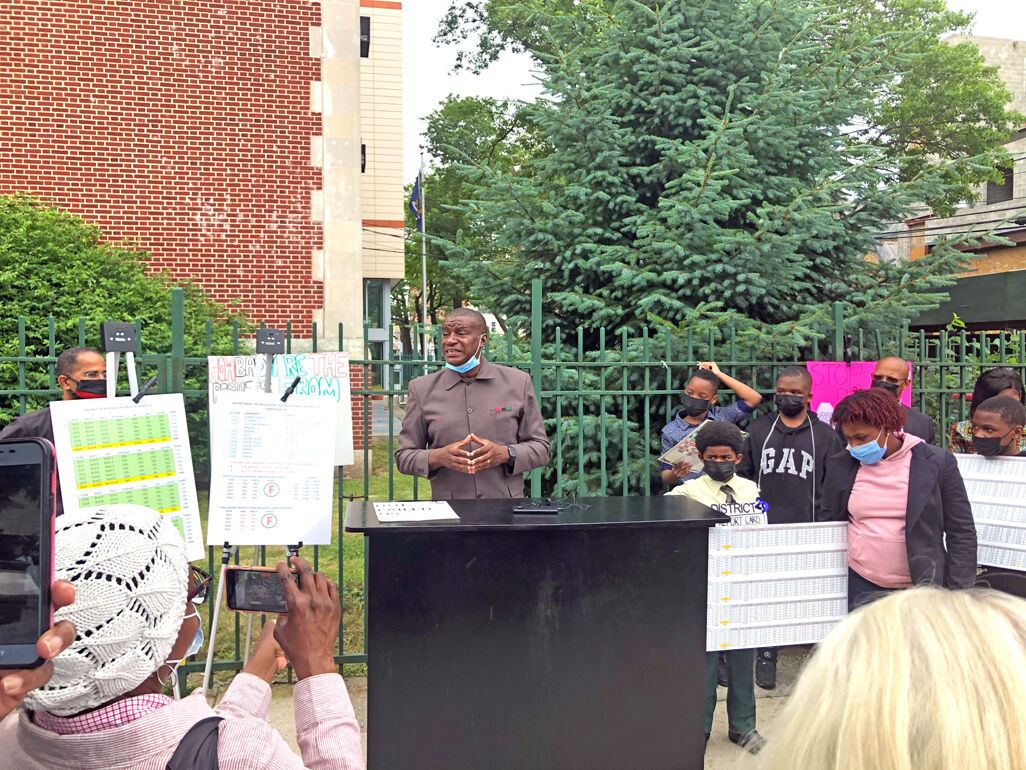 Parents, community leaders and clergy are disappointed in the education provided by School District 29 schools and want an end to mayoral control. Activist Michael Duncan, above, spoke of suing the city’s Department of Education. 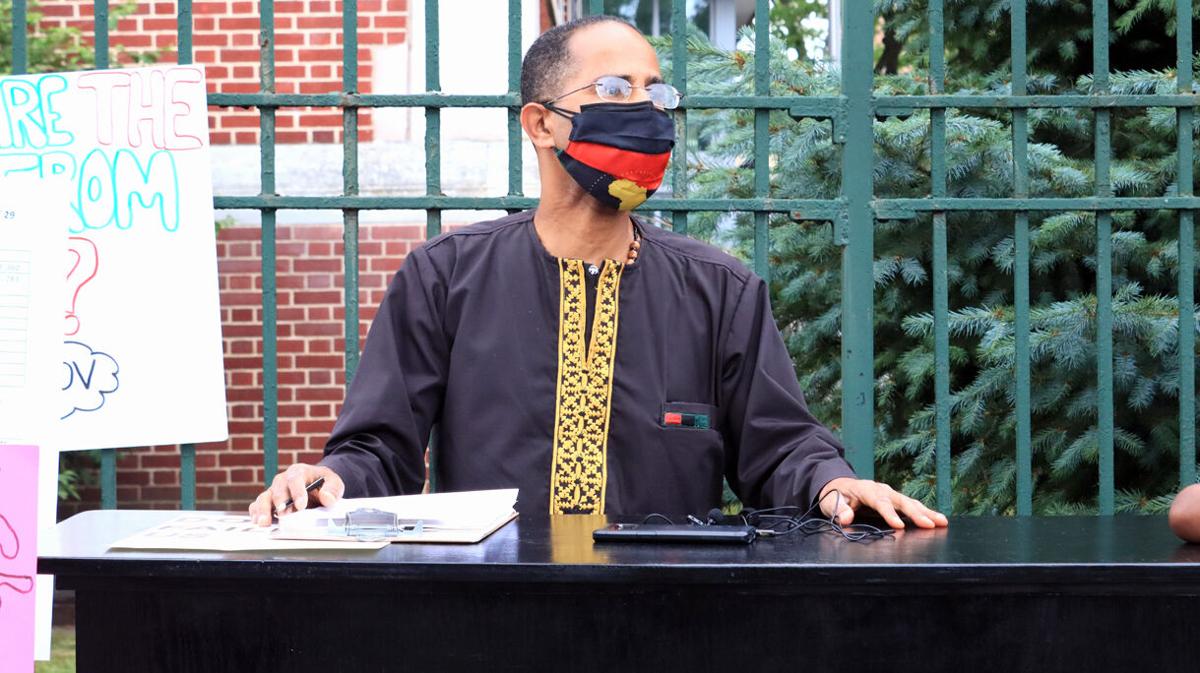 Raymond Dugue, a community leader, is fed up with School District 29’s performance.

ELA, math and college readiness scores were displayed at the protest to highlight the poor performance of the schools.

Parents, community leaders and clergy are disappointed in the education provided by School District 29 schools and want an end to mayoral control. Activist Michael Duncan, above, spoke of suing the city’s Department of Education.

Raymond Dugue, a community leader, is fed up with School District 29’s performance.

ELA, math and college readiness scores were displayed at the protest to highlight the poor performance of the schools.

Community leaders and parents rallied last Friday outside PS 35 in Hollis as a call to action against the city and state’s education departments, elected officials in Southeast Queens and School District 29, which covers Cambria Heights, St. Albans, Laurelton, Springfield Gardens, Rosedale, Hollis and Queens Village, because of the poor test scores of students in the district.

“These are communities that are overwhelmingly Black people,” said Raymond Dugue, the second assistant president general of the Universal Negro Improvement Association and African Communities League, a social, humanitarian and educational organization for the Black diaspora. “In fact, according to the Census, Black people make up 78 percent of those communities.”

The high schools in the area are not faring any better, according to Dugue, based on the college and career readiness factor extrapolated from English and math Regents’ results.

“While 65 percent is considered passing for the New York State result ... for the English, 51 percent [of students] are college and career-ready and for math it is 49 percent,” said Dugue.

The drop in students taking the ELA and math exams in the district is an indicator parents are taking their children from schools in the region, according to Dugue.

Dr. Virginia Norville, a Cambria Heights resident and a member of the Clergy & Laity Educational Empowerment Task Force, a nonprofit, said she was guilty of making sure her great-grandchildren were taken to District 30 and District 26 schools so that they get have a better education.

“The education being offered presently and in the past is unacceptable,” said Norville. “We are going to work together as a community, with our leaders and the Department of Education, but we are not going to accept what they are giving our students now.”

Norville’s great-grandchildren are currently on a waitlist to attend the Louis Armstrong Middle School in East Elmhurst, which comes highly reviewed by school sites niche.com, publicschoolreview.com and insideschools.org.

Community leader Michael Duncan, the president of UNIA, is also ashamed of having to take his children out of public school.

Councilman Daneek Miller (D-St. Albans)told the Queens Chronicle that he had met with the community leaders two days ahead of the rally, but did not commit to attending.

“We did offer to facilitate a meeting between the superintendents and the members of the group to address the concerns and specific data points that they presented, with the understanding that test scores have been culturally biased and often do not reflect the true educational experiences of our young scholars,” said Miller, who is term-limited this year. “Still, we remain committed to providing a forum to discuss these concerns as well as the lack of resources for students in temporary housing, lack of access to technology, and the need for bilingual teachers for English language learners among other items”

Miller says there has been incremental progress in SD 29 schools over the past several years, but he looks forward to continued improvements with fair student funding and similar initiatives.

The DOE agrees with Miller.

“All students deserve a rigorous education that sets them up for success in school and life, and we have met with parent leaders in District 29 to hear their feedback and discuss their priorities,” DOE spokeswoman Sarah Casasnovas said to the Chronicle via email. “Our continued investments in our school communities have led to record-high graduation rates, record-high college enrollment rates, and record-low dropout rates, and we will work closely with the district to strengthen the progress we’ve seen in student achievement.”

Parents like Keisha Ellis, 39, of Cambria Heights, believe that SD 29 teachers are moving children ahead and curving their scores upward because of the No Child Left Behind policy that was enacted under former President George W. Bush.

Ellis was the first parent to reach out to Duncan and Dugue to help her find a better learning institution for her child, which led to their research of area schools.

Ellis’ son attended PS 138 in Rosedale but she was told by a teacher to send him to a better school.

“When she told me to remove my son, I said, ‘Where am I going to send him,’” said Ellis, a warehouse worker.

Despite working from 11 a.m. to 7 p.m., Ellis carves out time to help her child with his homework so that he doesn’t fall behind in his education.

“I don’t have any money to send him to private school,” said Ellis.

Bush’s act increased the federal government’s role in education by threatening Title I funding if states did not comply to testing third-, eighth-grade and high school students once a year and boosting the grades of English language learners, those with disabilities and students from other disadvantaged groups. But many education activists think that has led to educators teaching to a test instead of providing comprehensive learning.

The DOE says that 2018 and 2019 assessments of exams cannot be compared to prior years because the test has been rescaled and test administration has changed from three days to two days. It attributed the decline of student enrollment in public schools to the overall drop in birth rates across the country.

In addition, the DOE intends to design a professional learning program to better respond to a student’s progress on the ground, along with more coaching of new teachers as well as leaders next year.

The Mayor’s Office did not comment about the grades or the rally. Neither did state Sen. Leroy Comrie (D-St. Albans), Assemblywoman Alicia Hyndman (D-Springfield Gardens) and Assemblyman Khaleel Anderson (D-South Ozone Park). However, Assemblyman Clyde Vanel (D-Queens Village) called the Queens Chronicle to say that members of the Legislature were in their session voting on bills way into midgnight in Albany last week.

Vanel, however, said he is working on putting together a summer coding program to prevent children from falling behind in their education, especially after Covid, but he would need parents help to sign up 150 kids to get the intiative off the ground.

“We’ve always been concerned about the performance in the schools,” said Vanel. “We have put funding in for summer academic programs for kids in the district.”

Vanel is also working with Khan Tutorial, one of the city’s best tutoring centers, to help youths and teens from elementary to high school to improve their reading and writing.

“Ask yourself why Cardozo, Francis Lewis and Bayside [high schools] are run by the same people who run August Martin, Springfield Gardens High School and what used to be called Andrew Jackson. Those last three schools are in our communities.”

Bryan took issue with the city spending more than $90 million on the 116th Precinct, while there is no library in Springfield Gardens.

Diandra Ledee, 32, from Rosedale took her son out of PS 195 when her child’s teacher told her that he is reading at a third-grade level in first grade and would benefit from a better school.

“My son Andrew, we had decided to send him to PS 195, “ said Ledee. “Within one week they tested his reading level ... His teacher brought us aside and said he was very advanced for his age.”

The teacher told Ledee if her son stayed at the Rosedale school he would get distracted and fall behind because he would not be as tended to.

“We need to make a change,” said Ledee, who decided to send her child to a private school.

This article was updated to include the URL for the Public School Review.