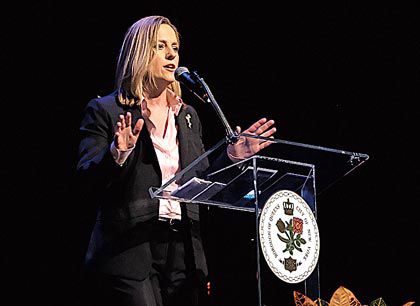 At LaGuardia Community College, Borough President Melinda Katz delivered her annual State of the Borough address — a speech that is part pep talk, part victory lap, part wish list. To Queens’ movers and shakers, the event is like a family wedding, a chance to catch up with long-absent friends, to see and be seen. 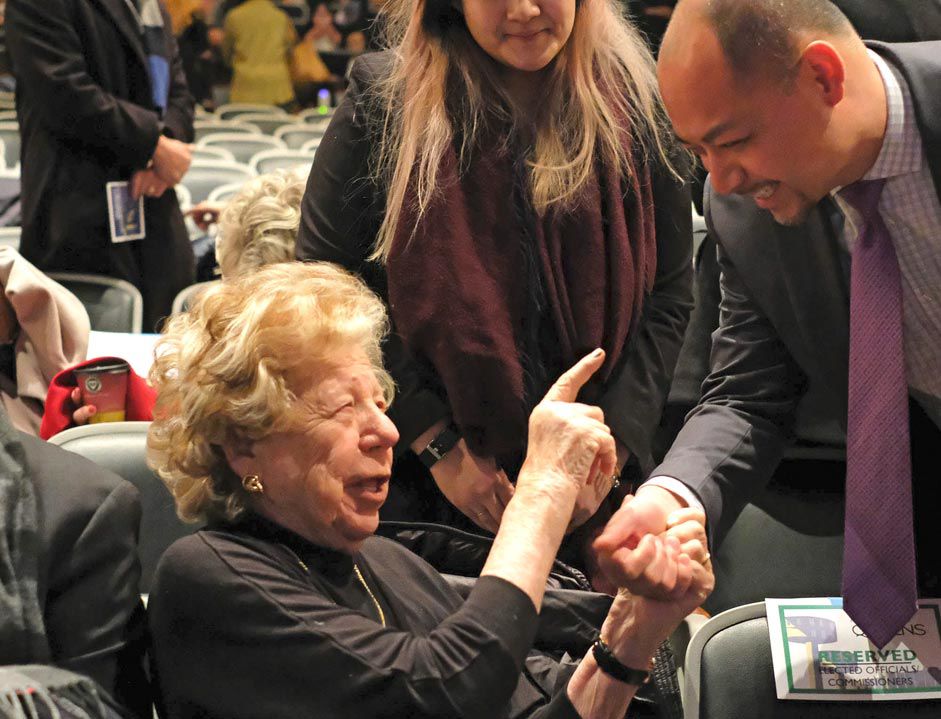 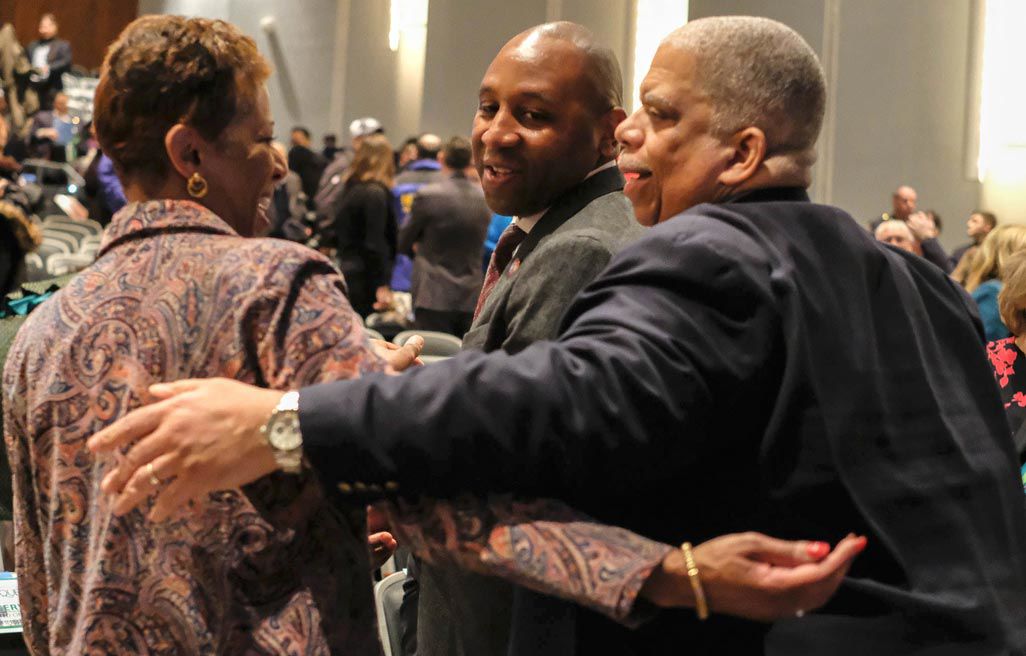 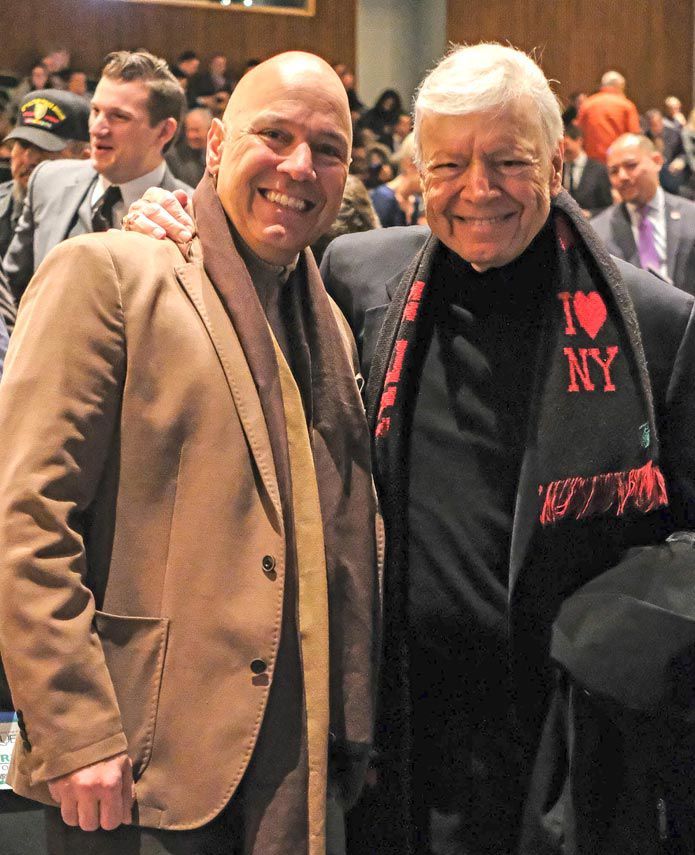 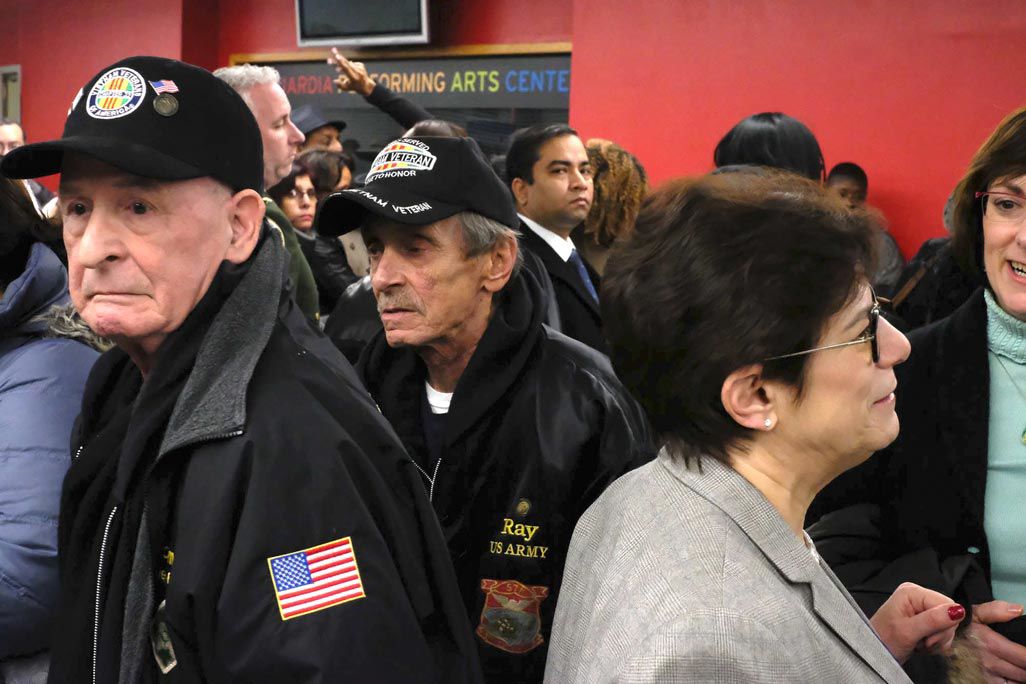 Members of Vietnam Veterans of America, who were honored during the speech, make their way into their seats.

At LaGuardia Community College, Borough President Melinda Katz delivered her annual State of the Borough address — a speech that is part pep talk, part victory lap, part wish list. To Queens’ movers and shakers, the event is like a family wedding, a chance to catch up with long-absent friends, to see and be seen.

Members of Vietnam Veterans of America, who were honored during the speech, make their way into their seats.

Borough President Melinda Katz last Friday backed Mayor de Blasio’s plan to close the jails at Rikers — but came up short of endorsing the construction of a new 30-story lockup on Queens Boulevard to replace it.

Katz, who announced last month that she is running for Queens district attorney, chose what may be her final State of the Borough address to call for an end to the current jail system.

“Let me be clear,” she said for emphasis. “I have been, and I remain, a strong supporter of closing Rikers Island.

“It is a moral imperative that we overhaul our city’s jail system ... And closing Rikers is an integral part of that.

However, the borough president said, she was “deeply disturbed” that people in Kew Gardens, where a new jail is slated to be built, have not had “meaningful community engagement and input.”

The highly controversial plan to erect a 1.9-million-square-foot jail behind the Criminal Court building big enough to hold 1,500 inmates is a hot-button issue in the upcoming DA’s race.

Community groups in Queens as well as the other boroughs fear City Hall is preparing to ride roughshod over them in the next few weeks when the plans for new jails here, in Manhattan and the Bronx come up for approval by the City Planning Commission.

“The absence of community input is not lost on the boroughs,” she told nearly 800 people at LaGuardia Community College, including a large group of current and former officials. “Certainly not here in Queens.”

She called for the city to “start anew” and come up with a better plan.

“There’s still plenty of time to do it the right way,” she said.

Coming out in favor of replacing Rikers sets her apart from the current DA, Richard Brown, who, at age 86, has said he will not seek re-election this fall. Brown has come out in favor of rebuilding Rikers, rather than constructing a system of borough-based jails.

The State of the Borough address is traditionally a guided tour of improvements, or promised improvement, to schools, parks and housing around the borough. This year’s 45-minute-plus speech did not disappoint.

Perhaps the biggest applause lines of the morning came when Katz said she is pressing the Port Authority and others at JFK Airport to hire more residents from the surrounding neighborhoods in Southeast Queens.

“In order to be successful, we need to hire local, have a path to union apprenticeship programs and have ample opportunity for second-chance employment,” she said.

“Ideally, we want every single good-paying job created at our airports filled by Queens residents.”

As well, Katz led an emotional tribute to the borough’s Vietnam veterans who, after years of promises, saw her break ground last month on a monument in Elmhurst. The memorial will carry the names of more than 350 soldiers from Queens who were killed in the fighting there.

“I remember witnessing the betrayal and despair that you and your brothers felt coming home to what felt like an ungrateful nation,” she told a group of about 20 men from the Vietnam Veterans of America, whom she’d asked to stand. “Welcome home.”

She also pledged to boycott any questions on the 2020 Census form pertaining to citizenship. She called the plan to include such a question, now in the courts, “unnecessary.”

“I will refuse to answer that question,” she said. “Times like these compel courage by those with the privilege to do so.”

Katz wants to bring a mega new jail to Queens residents with no regard for public safety in the middle of a highly populated residential area with schools a block away. This new jail will have amenities with recreational space trauma center shopping with “rehabilitation” programs so convicts can and continue to punch,beat, murder, rape, assault residents. Katz is more concerned for criminals then for law abiding residents. NO it is not OK to jump turnstiles and sell drugs! How about we all start jumping turnstiles! If a member of a gang or mentally unstable person slashes you with a knife, murders you and brutally assaults you Katz wants them in a residential areas and near schools. Convicts at Rickers are muderes rapists and career criminals. NO ONE is send to RIckers cause they jumped a turnstile! They had warrants for arrests and multiple prior convictions. This will cost NYC taxpayers 30 BILLIONS! Way more than Amazon in LIC! Jail with dangerous criminals coming to your neighborhood courtesy of Katz!

How about build a new jail in her backyard? 30 stories on Queens Blvd. These Dems have got to be out their flipping minds!