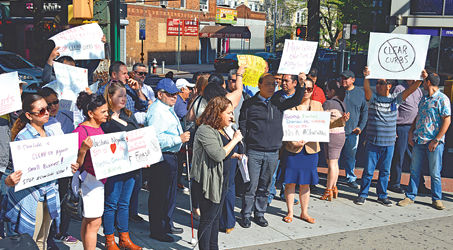 Leslie Ramos of the 82nd Street Partnership addresses how experimental parking and delivery rules have hammered merchants and businesses along Roosevelt Avenue on the Jackson Heights-Elmhurst border. 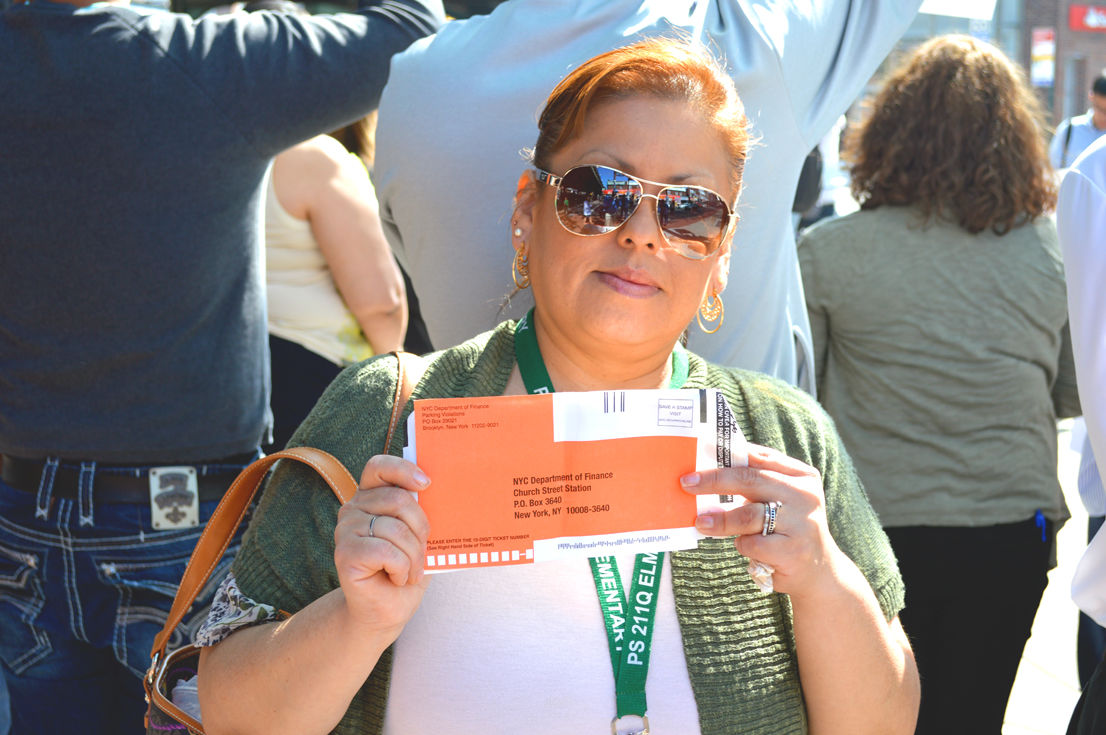 Miriam Montes holds up a piece of correspondence from the NYPD’s parking enforcement personnel.

Leslie Ramos of the 82nd Street Partnership addresses how experimental parking and delivery rules have hammered merchants and businesses along Roosevelt Avenue on the Jackson Heights-Elmhurst border.

Miriam Montes holds up a piece of correspondence from the NYPD’s parking enforcement personnel.

Back in March, the city’s Department of Transportation initiated a six-month pilot program called the Clear Curbs initiative, which eliminates parking and deliveries on both sides of the heavily traveled Roosevelt Avenue corridor between Broadway and 90th Street on weekdays from 7 to 10 a.m. and from 4 to 7 p.m.

Those looking to protect small businesses along Roosevelt from the negative impacts of the plan staged a rally on Wednesday morning at Manuel de Dios Unanue Triangle at the corner of 83rd Street.

Also on Wednesday, City Council members were scheduled to introduce a bill in response to the six-month pilot program, which retailers said is killing their businesses.

Under the Protect New York City Jobs and Businesses Act, the DOT and other city agencies would be required to notify an area’s City Council members, community boards and any affected business improvement district prior to altering parking rules.

Councilmember Francisco Moya (D-Jackson Heights), one of the bill’s sponsors, issued a statement on his Facebook page letting the DOT know “it cannot simply rollout initiatives without first consulting with the communities that will be directly affected.”

At the protest, Leslie Ramos, executive director of the 82nd Street Partnership, said the city gave only four days’ notice before the new rules took effect.

“We want the initiative lifted now. We need our parking back. We need the city of New York to talk to our businesses,” she said. She addressed the crowd in both English and Spanish.

“We need to have a voice,” she said. “We invite the mayor and the DOT to meet with us and understand why this program is not working. Businesses are struggling to meet their rent and to keep their customers.”

Business owners said since the program went into effect, they have seen drastic reductions in business.

Susan Lee, who owns a dry cleaning drop-off store in the area, said she just renewed her lease in March and has since seen a drop in business of 30 percent.

“It’s just crazy,” she said. “We can’t do our business here. Rent is soaring. Residents have a hard time parking, too.”

Albert Trivino, manager of a furniture store, cited a 20 percent drop in sales in recent weeks.

“Most customers are walk-ins,” he said. “But people come from Long Island and Manhattan. They call to complain they can’t find parking and leave.”

It’s a similar story for Glen Mirchandani, the treasurer for the 82nd Street Partnership who has owned a jewelry store in the area for 30 years.

“The last few weeks, business is down 20 percent. No one wants to come any more around here,” he said.

Matt Santiago, a nutritionist who works at a weight loss center in Elmhurst, said the city’s goal is about making traffic go faster. He offered several possible alternatives to the initiative.

“Why not stop double-parked cars?” he suggested. “Create some loading zones for trucks. Maybe buy a property and build a municipal parking lot five or six stories high.”

Icsy Moreno, an Avon salesperson, told of a customer who recently bought $60 worth of beauty products only to have his car towed. At ten minutes to four, the police are already stationed nearby, waiting to start giving out tickets, Moreno said.

Miriam Montes, who lives in Corona but sees a doctor on Roosevelt Avenue, knew about that all too well, holding up a $115 ticket, the equivalent, she said, of a week’s salary.