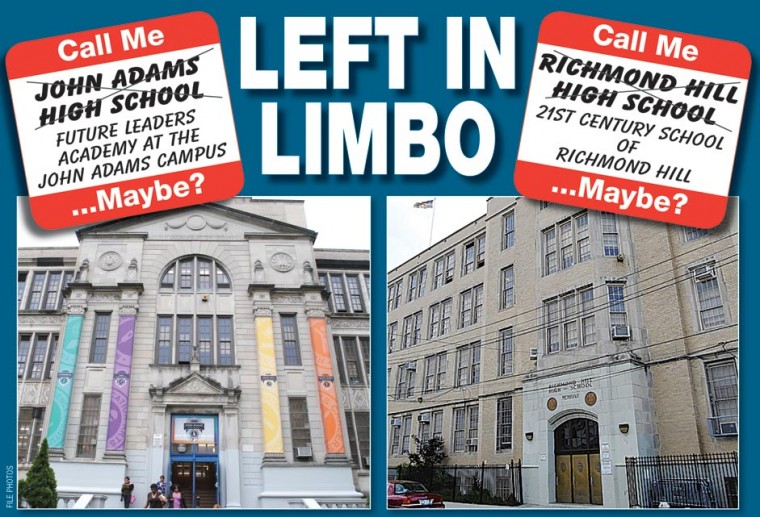 The city is backing off its high school ‘turnaround’ plan, leaving seven Queens high schools, including John Adams and Richmond Hill, unsure of everything from who is in charge to what they are called only weeks before a new school year starts. 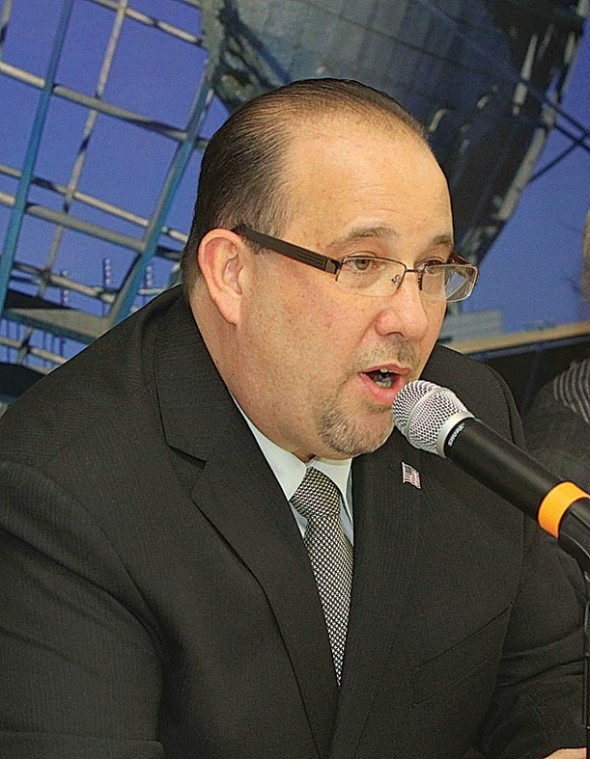 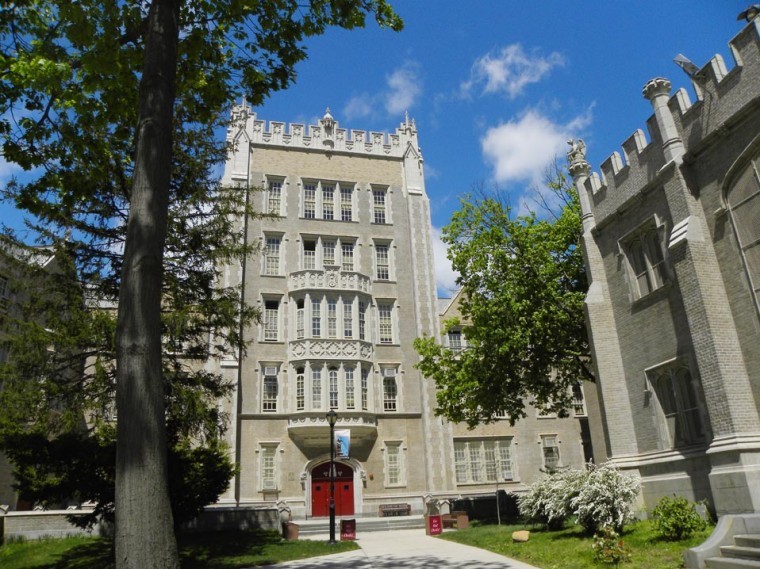 Flushing High School, one of the oldest high schools in the city, was among the seven high schools in Queens that were closed and due to reopen with a new name and largely new staff in September until an arbitrator ruled against the city last month.

The city is backing off its high school ‘turnaround’ plan, leaving seven Queens high schools, including John Adams and Richmond Hill, unsure of everything from who is in charge to what they are called only weeks before a new school year starts.

Flushing High School, one of the oldest high schools in the city, was among the seven high schools in Queens that were closed and due to reopen with a new name and largely new staff in September until an arbitrator ruled against the city last month.

The Bloomberg administration seemed to admit defeat this week on their comprehensive school “turnaround” plan that led to the Department of Education’s decision to close and rename 24 city high schools, including seven in Queens.

After being dealt back-to-back defeats from an arbitrator and a New York State Supreme Court judge, the DOE said the schools would, at least for the time being, open in September with the same employees as in June while the lawsuit against the city filed by unions representing teachers, school administrators and principals works its way through the courts.

“We have to operate under the principle that the staff who were at the school[s] will be coming back,” Chancellor Dennis Walcott conceded last week.

The recent events have left the two dozen high schools in administrative limbo, as some have already hired new staff who are planning for the new school year and may not actually have jobs in September, while others who were laid off are waiting to hear if they get to keep their jobs or if they have to reapply or move on — if they have not already.

“I don’t know what’s going on at this point,” said Dmytro Fedkowskyj, Queens’ representative on the Panel for Educational Policy who opposed the mayor’s “turnaround” plan along with PEP representatives from Brooklyn, the Bronx and Manhattan. Fedkowskyj said a lot of the questions over what happens next will hopefully be answered when the PEP meets with Walcott this week.

The United Federation of Teachers and Council of School Supervisors & Administrators sued the DOE to stop the controversial “turnaround” plan that was approved by the PEP in April which ordered the closure and re-branding of the two dozen schools including; Long Island City, William Cullen Bryant, Newtown, Flushing, August Martin, John Adams and Richmond Hill, in Queens. The plan had the support of all eight of Mayor Bloomberg’s appointees to the PEP as well as the Staten Island representative. No high schools in Staten Island were among those slated for closure.

The plan also mandated the firing of over 3,600 teachers and administrators at the schools, who were then made an offer to reapply for their jobs. The decision came after the DOE and UFT failed to agree on a teacher evaluation system to qualify for nearly $60 million in federal subsides. The city warns that money could be lost if the “turnaround” plan is not implemented. The UFT argued that the plan was retribution from the mayor for the stalemate on evaluations. One UFT representative described the mayor’s decision to pursue the plan as a “tantrum.”

New York State Supreme Court Justice Joan Lobis ordered the two sides to go before an arbitrator in May and the arbitrator, Scott Buchheit ruled for the unions on June 29. His decision said the “turnaround” plan violated the DOE’s contract with the unions and rejected the DOE’s arguments that the schools were entirely new, which would have allowed the city to void the contracts.

The city quickly appealed the decision and the case went back before Lobis. DOE asked for a restraining order that would have allowed the city to continue to implement the plan. DOE lawyers said denying the restraining order would do “irreparable harm” because it would disrupt preparations for the new school year, a process that begins in July. Lobis balked at the claim and denied the restraining order.

“Maybe you’d have to rescind some letters. How is that irreparable harm?” she asked during the hearing on July 10.

The DOE is still appealing Buchheit’s decision to the New York State Supreme Court, the lower court at the state level and oral arguments begin on July 24.

Fedkowskyj said he was concerned that some of the key planning for the new school year is being lost this month because of the legal limbo. Some of the schools’ administration have found new employment or retired and may not return even if a court rules they can keep their jobs. Up to 20,000 students were affected by the “turnaround” plan, Fedkowskyj said.

Whether or not the schools will continue to keep their names or still have them changed is unclear. Each school was to reopen in September under a new name. For example, John Adams High School was scheduled to reopen as Future Leaders Academy at John Adams campus. Fedkowsky said the schools’ names are important not only because it gives the school an identity, but the names have DBN numbers, numeral codes by which the DOE identifies them, that go along with the names. Those numbers were changed when the turnaround plan began being implemented at the end of the last school year.

Nevertheless, Fedkowskyj expressed confidence that the schools will be ready to open in September regardless of what happens with the court case. He also blasted Bloomberg for pushing the “turnaround” plan over other options including keeping the plan in place, which he said was not given enough time to work in these schools. He expressed concern that if Lobis upholds the arbitrator’s decision on the”turnaround” plan, DOE will not have a plan to fall back on, either next year or in future years.

“The bigger concern that I have and that [Borough President Helen Marshall] has is that we have a plan in place going forward.” Fedkowskyj said. “Our school communities deserve a plan, not an experiment.”

Lobis expedited the case in order for it to be heard before the beginning of the school year, which begins in six weeks. Lawyers for the DOE said they are still confident the city can ultimately have the arbitrator’s decision overturned.

“Our goal is to turn around these failing schools and help our students succeed. We appreciate the judge setting an expedited schedule to hear our challenge to the arbitrator’s decision so that we can meet that goal,” said Michael Cardoza, corporation counsel at the NYC Law Department, the legal representative for the DOE. “The judge also made it clear that she wants to consider the case fully. We believe that, after she reviews our papers, she’ll conclude that the arbitrator was wrong.”

Lawyers for the unions were just as confident of victory, noting that judges rarely ever overturn decisions made by arbitrators. But James Vasquez, UFT representative for Queens high schools said regardless of what the judge ultimately rules, the damage has already been done to the schools that made the list.

“We’ve lost now the first five months of the last school year and in the last six months they did nothing else than just to plan around everything instead of supporting schools,” he said, adding he believed that even Grover Cleveland High School, which was removed from the list of closures in the eleventh hour, also struggled because of the mayor’s pursuit of his “turnaround” plan.

“We still believe all of these schools deserve our support and should be kept open,” Vasquez said.

A final decision from the courts may not come until as late as August — only weeks or perhaps days before the new school year starts. Principals and administrators are scheduled to report for the new year on Aug. 27. Students begin classes on Sept. 6.