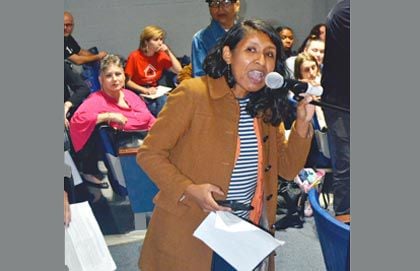 Raquel Namuche of the Ridgewood Tenants Union speaks at Christ the King High School Monday night about the planned homeless shelter for 200 men to be located at 78-16 Cooper Ave., in Glendale. The 90-minute hearing saw many area residents use strong language toward city officials and representatives of Westhab, the shelter’s provider, including even a reference to arson.

Raquel Namuche of the Ridgewood Tenants Union speaks at Christ the King High School Monday night about the planned homeless shelter for 200 men to be located at 78-16 Cooper Ave., in Glendale. The 90-minute hearing saw many area residents use strong language toward city officials and representatives of Westhab, the shelter’s provider, including even a reference to arson.

A public hearing about the planned homeless shelter for 200 single men to be housed at 78-16 Cooper Ave. saw speakers for and against the plan, but the loudest cheers were for area resident Isabella Cinelli, who said, “I hope somebody’s gonna burn the place down.”

A raucous crowd filled Christ the King High School on Monday night for an emotional 90-minute meeting featuring officials from the Department of Homeless Services and Westhab, the operator of the shelter.

“I’m sorry. I can’t abide by that,” he said. “You can’t threaten to bomb a shelter where there are people living ... I refuse to accept that a New Yorker would say that.”

Annabel Palma, deputy commissioner of strategic initiatives at the Department of Social Services, added, “Our clients are not criminals and shelters are not bad for our community.”

Area residents lined up outside the school to get into the highly anticipated hearing about the on-again, off-again shelter, which the city plans to have in place in the first quarter of 2020 despite much community objection and protest.

Jim Coughlin, senior vice president of services for Westhab, said finding people employment is the goal from day one and that shelters offer a sense of permanent housing though the stays are no longer than nine months.

“When you walk into the building you don’t feel like you’re in a shelter,” he said. “It’s so important that you have the sense of community within the shelter. That you have a sense of safety in the shelter and you get that from day one in our programs.”

Coughlin also said there will be a community advisory board for the project.

He received plenty of feedback Monday, such as Nicole Albergo’s suggestion to “Put them in a desolate area away from society.”

“I worry about all the females in this area, including myself, while walking my dog, whether I have to be beaten and raped, and my poor dog killed by these men,” Albergo said.

She also referenced the idea that a school for special needs students could come to the site instead. Albergo said that she hopes the “right decision” is made for District 75 students “rather than the homeless lowlife pieces of crap that my tax dollars pay for.”

Albergo had a final message for the officials on stage: “I’m going to continue to fight against you people. I don’t want you here. At all. You’re not welcome in Middle Village and Glendale.”

Raquel Namuche of the Ridgewood Tenants Union asked people in the audience to raise their hands if they care about the community’s safety and if they believe the mayor and governor should do more for “our communities.”

“If you raised your hands, you should all be working together to fight City Hall to build housing for our communities,” she said, which was met with jeers. “I don’t understand why anyone here would disagree with building housing for people that need it.”

Namuche said shelters are not the solution and that they should be working together to fight City Hall, while also blaming Councilman Bob Holden (D-Middle Village), who opposes the plan and wants the school instead, for “dividing” people.

“We all have a common enemy,” she said. “The common enemy is Mayor de Blasio and our governor.”

Holden was challenged about some of the statements speakers made, including the one from Cinelli, and tweeted in response Tuesday morning.

“I understand that my neighbors are frustrated, but comments like this are dangerous and uncalled for,” he said. “Making such threats serves nobody, and I’m very disappointed with how this meeting is being portrayed as a result.”

“This kind of vitriol and demonization of our neighbors is dangerous and we won’t stand for it,” he said. “There are people in need of safe and humane shelter in our city. We’re going to take care of them whether hateful voices like it or not.”

De Blasio added, “Every community in this city has a right to express legitimate concerns about how services, safety and communication with the public will be handled at a new shelter. The work is never easy. And we have to get it right every single time.”

Community Board 5 member Crystal Wolfe had little success reaching the crowd. Wolfe, the founder of Catering for the Homeless and author of a book about them, looked to alleviate concerns of the community but was shouted down with cries of “Put them in your home.”

The ringing bell announcing her speaking time was through was met with applause from the crowd.

Assemblyman Andrew Hevesi (D-Forest Hills) said he spent an hour and a half at a vigil in Manhattan for four homeless men slain in an attack early Saturday morning in Chinatown — hecklers yelled that the suspect is also homeless.

The shelter is to be for men who are employed or seeking work. Coughlin said a job developer will be responsible for going out into the community to find spots with local employers.

Valerie Smith, Westhab’s assistant vice president of NYC housing programs, said, “We are not willing to push our clients back in the community when we know that they’re not ready.”

Coughlin said vans will transport people to trains and, in some cases, to and from work.

DHS Deputy Commissioner Iris Rodriguez said the percentage of homeless residents housed now who come straight from the prison system is “very low.” She also said if it’s determined the shelter can’t help someone there, the person would be transferred.

Another issue raised by many is the abundance of schools in the area. Borden said the impact on those is considered in an environmental assessment statement for a shelter for families and children, but it’s not a factor for one with single men.

The owner of nearby Triumph Gymnastics, Cristina, noted that the entrance to her location is visible from the shelter and that the men could see the girls entering and leaving. Practice ends at 8:30 p.m.

“Our coaches, athletes, families will no longer be safe walking to their cars,” she said.

Daniel Liles, Westhab’s director of security, said the organization’s approach allows it to manage the behavior of residents and keep incidents to a minimum.

“We don’t manage shelters,” he said. “We manage communities where residents are treated with dignity and respect.”