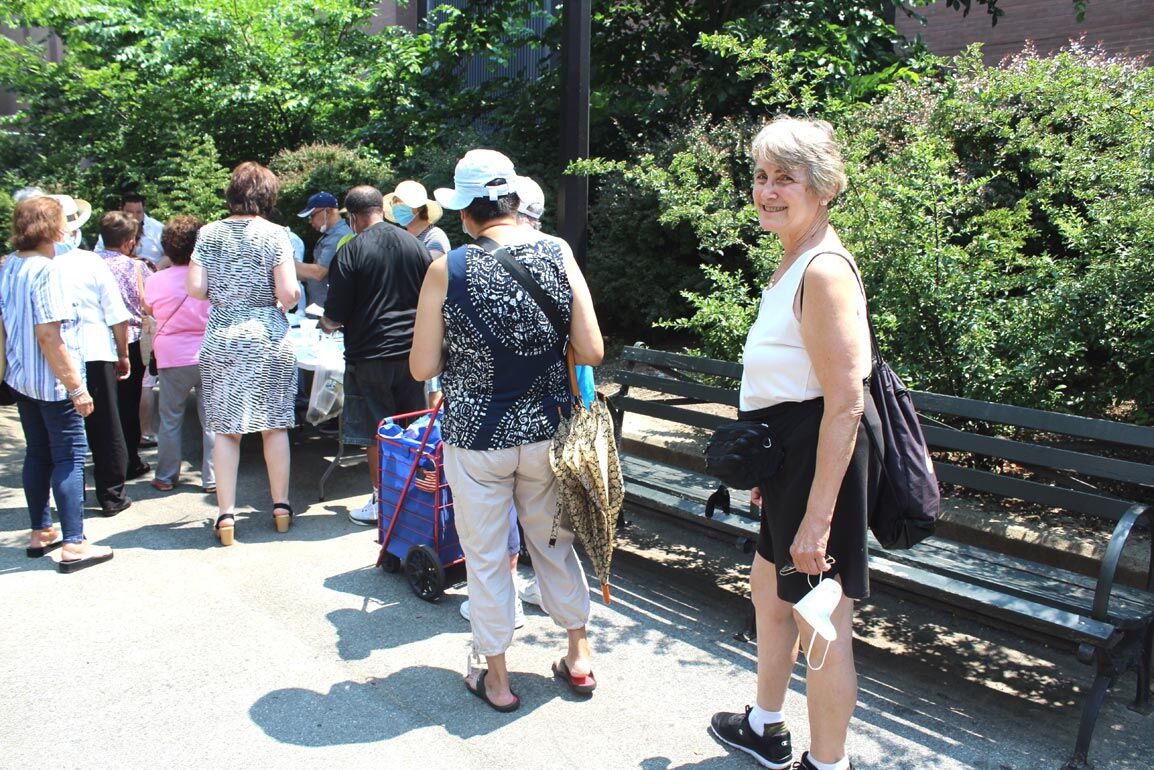 Seniors including Bonnie Sholl, right, line up for a hot lunch outside the Queens Community House Rego Park Senior Center, after an outdoor Zumba class there. 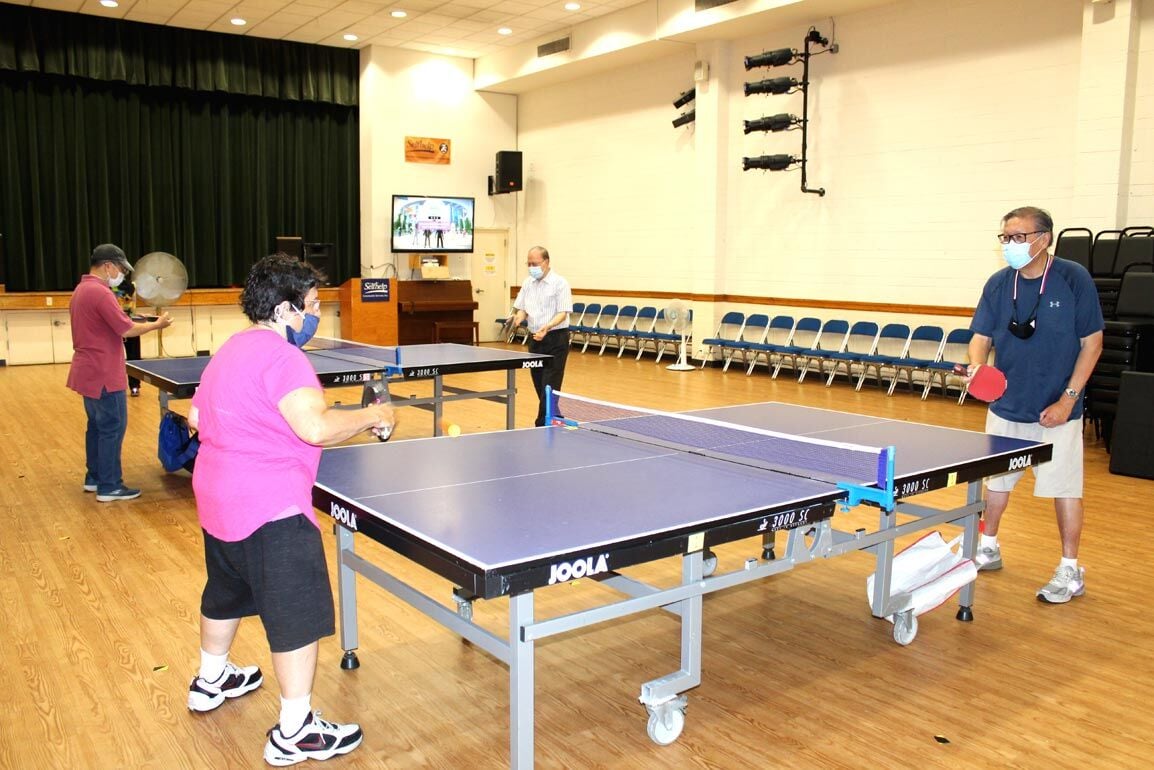 John Rodriguez, 64, is new to the Ridgewood Older Adult Center and goes for lunch during the week. 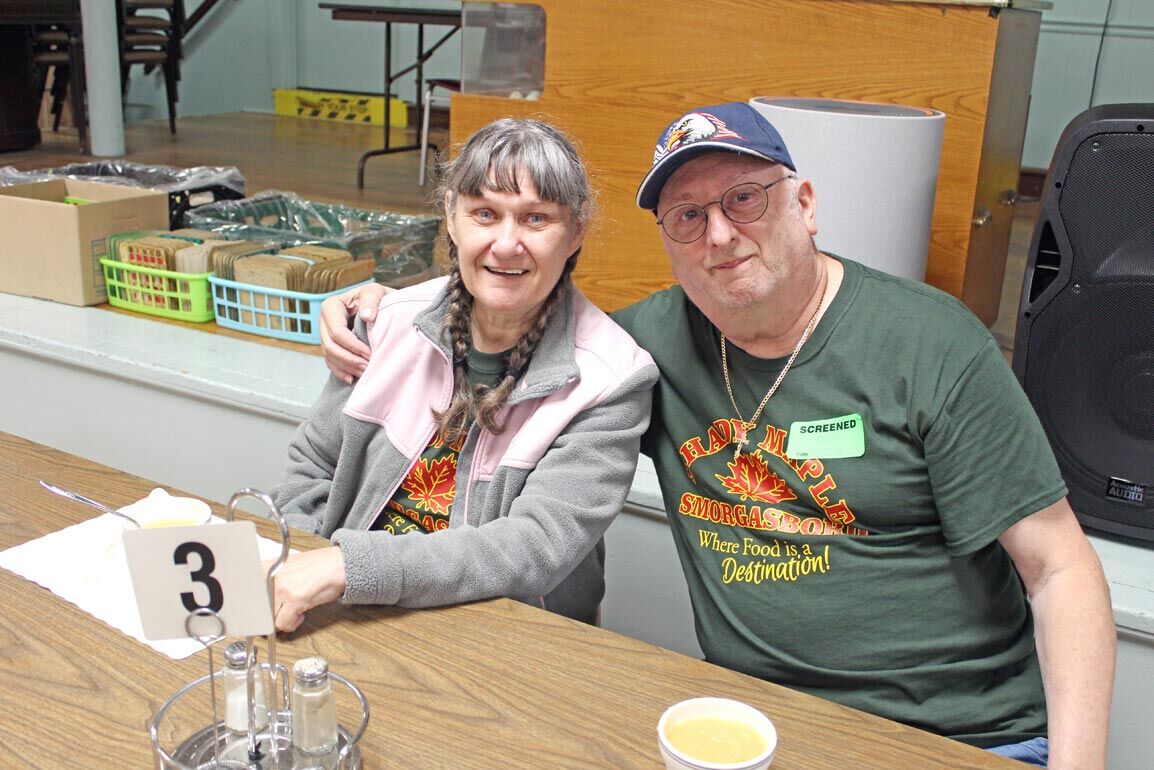 Janet and John Santoro, right, have gone there for several years and say it is their favorite one. 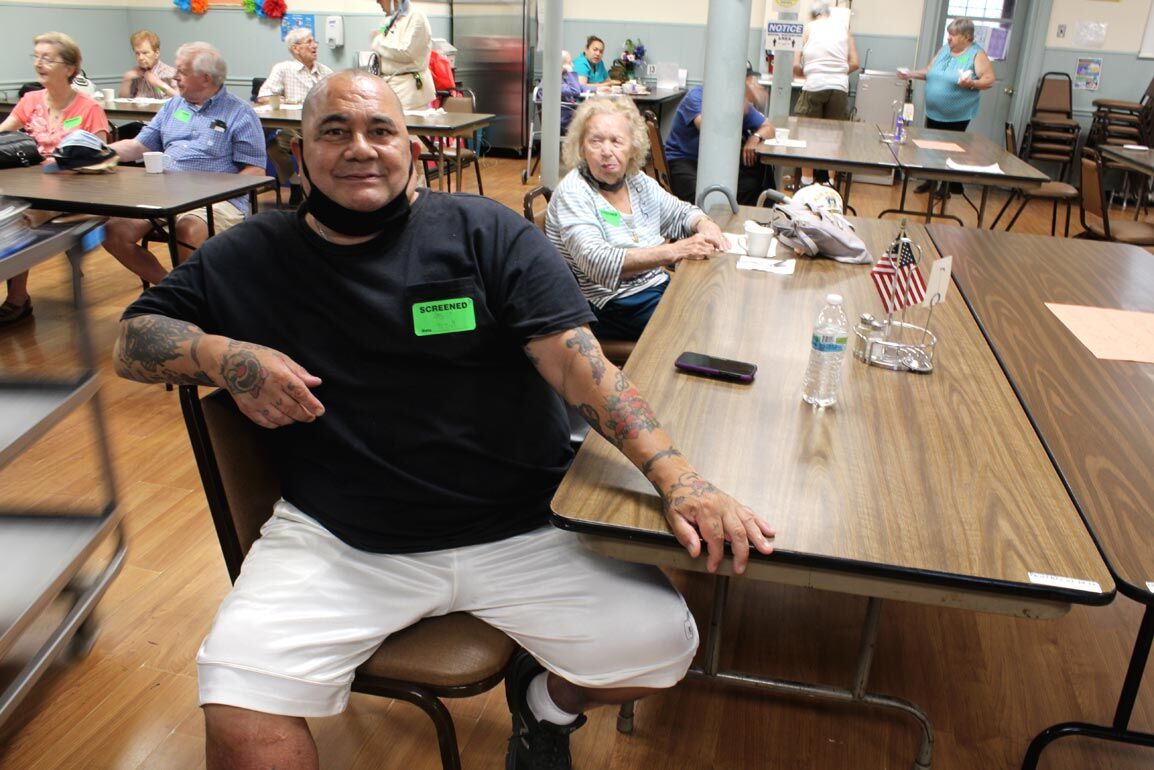 John Rodriguez, 64, left, is new to the Ridgewood Older Adult Center and goes for lunch during the week.

Seniors including Bonnie Sholl, right, line up for a hot lunch outside the Queens Community House Rego Park Senior Center, after an outdoor Zumba class there.

John Rodriguez, 64, is new to the Ridgewood Older Adult Center and goes for lunch during the week.

Janet and John Santoro, right, have gone there for several years and say it is their favorite one.

John Rodriguez, 64, left, is new to the Ridgewood Older Adult Center and goes for lunch during the week.

Last week was Cathy Frank’s first time back to her senior center, the Ridgewood Older Adult Center and Services, in over 15 months. Although senior centers were opened for indoor and congregate activities on June 14, Frank was hesitant to go back because of the pandemic.

“I wanted to see how the center was going to be run before I came in,” she said. She said she felt “all right” about it, though, and that it was good to be back and see her friends. She even got a special shout-out over the mic from John Santoro, another member of the center who was calling bingo after lunch that day.

John and his wife, Janet Santoro, were eager to get back to the center on June 14. They attend five days a week and John Santoro said it is his favorite center out of all those that he’s visited over the years. “Great people, good atmosphere — I have nothing to complain about,” he said. He and his wife attend mainly for bingo, which he often leads, but sometimes she’ll join in the exercise classes, like the “sit and be fit” classes that are resuming again under new guidelines issued by the city Health Department and followed by the Department for the Aging, which funds about 250 centers across the five boroughs.

“Senior centers are a center of activity for a community,” said DFTA Commissioner Lorraine Cortés-Vázquez. “They have evolved from just meal programs to social and educational hubs.”

“The pandemic illustrated for us the value that they have in terms of socialization and how they are a preventive measure from depression and other health concerns,” said Cortés-Vázquez.

But it has not been so easy to get the senior centers back open for in-person activities. Besides protecting the attendees, it’s also important to consider the staff, said the commissioner. “You’ve got to onboard staff and make sure that the staff feels safe, secure and able to come back,” she said. “Some people are having challenges.”

It is “not just turn on the lights and open the lock,” due to working with staff and employing safety guidance, she said. Centers must encourage mask wearing and 6 feet of physical distancing, and conduct routine disinfection.

Mayer Waxman is the managing director of senior centers at Selfhelp Community Services, which manages five city-funded centers, all in Queens. He said there is a balance between encouraging seniors to come back to the centers and continuing to offer virtual programs and services.

“We don’t want to encourage people not to come to the centers if it’s safe,” said Waxman. “We don’t want to keep them isolated.” He has noticed “two extremes” between those who want to “get back to everything” and those who are not yet comfortable. Some have been pushing the centers to open for months while others are saying they’re “not doing enough to keep us safe,” he said. But most fall somewhere in the middle.

“We’re as strict, if not stricter, than DFTA, which is certainly as strict or stricter than the [Centers for Disease Control and Prevention]. It’s our mission to make sure they stay safe,” he said.

Waxman and Katie Foley, managing director of external affairs and communications at Selfhelp, have noticed an increased need for the social workers on-site at senior centers.

“The social workers are going to, we think, become busier and busier throughout the year as people want to renew benefits applications or they need assistance with other benefits and entitlement,” said Foley.

“We’ve seen an increase in case management needs,” Cortés-Vázquez said. “The pandemic has made people realize the full portfolio of benefits they are entitled to.”

It has also increased the need for support for caregivers, like people who are caring for an older family member or are a senior caregiver themselves.

“Caregivers have been under incredible stress during this pandemic,” she said.

There is also an increased need for transportation options as people are hesitant to use public mass transit systems, said Cortés-Vázquez. Her agency is looking at the need for more “targeted transportation services” and recently launched a pilot program called DFTA My Ride to provide transportation to eligible older adults.

Barry Klitsberg is the president of the Queens Interagency Council on Aging and he and the commissioner agree that funding for older adult services is lacking.

“We hope to see the senior centers fully open and that funding is increased,” said Klitsberg, including city, state and federal dollars. He also said that, in addition to affordable housing for seniors, isolation is a big problem. “This is something that has to really be recognized by civic leaders,” said Klitsberg.

Many seniors take it upon themselves to check in with the friends they have met at the centers and make sure they are doing well.

“We each have our phone numbers and if they don’t see you, they call you up saying ‘You OK?’ We’re pretty concerned about each other,” said Howard Zissel, a member of the Ridgewood Older Adults Center.

During the pandemic, staff at Selfhelp’s Benjamin Rosenthal-Prince Street Innovative Senior Center in Flushing even dropped off a birthday cake for one of their “centennial” members who had turned 102 years old, said Jane Qiu, the center’s director.

The community that is formed at the centers but extends beyond them is evident at the Queens Community House Rego Park Senior Center, too. During the pandemic, the center provided wellness checks over the phone, said Irina Sarkisova, its program director. The center offers a daily “grab and go” lunch, and Stephen Sherman of Glendale often picks up his lunch and another for a friend he met at the center who is not well enough to come herself now. Then, the two eat lunch together at her apartment, said Sherman.

Maria Padilla teaches Zumba at the Rego Park center. She has a group of about 20 women who show up every weekday morning for her outdoor class, no matter the weather. They also have a group chat over text, in which Padilla will share pictures she took of them and also send holiday wishes.

Bonnie Sholl of Rego Park took Padilla’s class. “It was lovely,” she said. “It was low-impact and I’m going to make it part of my schedule this summer. I’m really anticipating utilizing the facilities that work for me.”

The Rego Park Center operates out of the Lost Battalion Hall Recreation Center and will open back up for indoor services in September once a summer camp program there ends. In the meantime, it does serve members for case management appointments.

Sholl is looking forward to more options that will come when the center opens fully. “Next, I’m going to get computer lessons,” she said.

This article was updated to clarify that health guidelines followed by the Department for the Aging come from the Health Department.