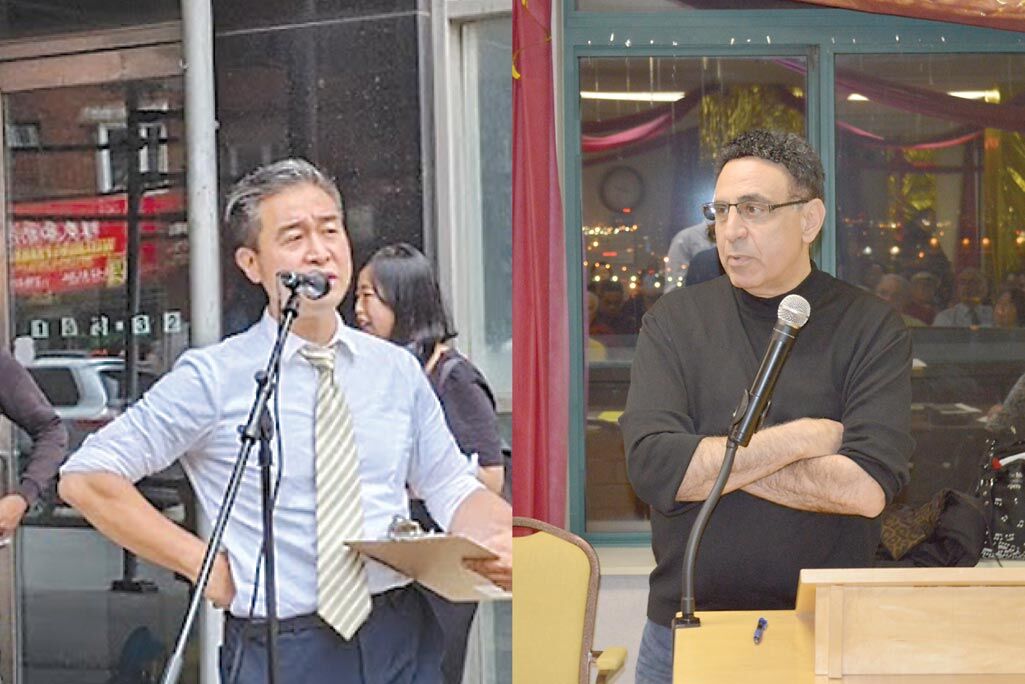 At its June 14 meeting, Community Board 7 voted to investigate alleged misconduct by member John Choe after Vice Chairperson Chuck Apelian, right, read off five charges. Choe, left, denies the allegations and questions the timing — just days before the District 20 City Council election in which he is running. 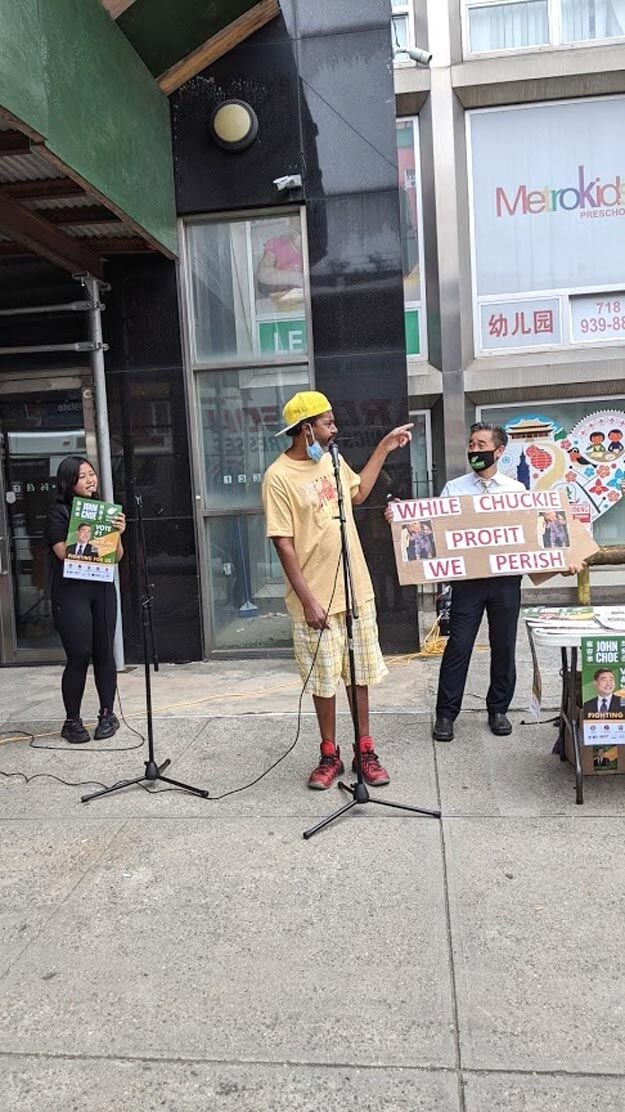 A District 20 constituent speaks in support of John Choe, right, at a rally held in objection to Community Board 7’s decision to potentially remove Choe from the panel.

At its June 14 meeting, Community Board 7 voted to investigate alleged misconduct by member John Choe after Vice Chairperson Chuck Apelian, right, read off five charges. Choe, left, denies the allegations and questions the timing — just days before the District 20 City Council election in which he is running.

A District 20 constituent speaks in support of John Choe, right, at a rally held in objection to Community Board 7’s decision to potentially remove Choe from the panel.

Community Board 7 resoundingly voted to pursue an investigation into one of its members Monday, which could potentially result in his removal.

John Choe, the Greater Flushing Chamber of Commerce executive director and a District 20 City Council candidate, was accused of five charges of misconduct: using his stance as a board member to solicit campaign funding via email to his colleagues; creating an unauthorized CB 7 Facebook page to promote the GFCC; eluding board voting by abstaining or leaving meetings early; defaming his colleagues by accusing them of being corrupt; and admitting during public testimony that his own vote could be bought.

The testimony Vice Chairperson Chuck Apelian referred to was the Feb. 20 Queens Borough President’s Land Use Hearing on the Special Flushing Waterfront District, where Choe spoke against the project, but added that “for the right price I might be persuaded to change my mind.” He was one of eight board members to vote down the development while 30 others gave it the OK.

The comment was not meant to be taken at face value, however — it was a dig at some of his fellow board members who were paid consultants for the project, “a situation that is rife with conflicts of interests,” Choe said last year. One of these members was Apelian himself, who chose to abstain from the vote due to the conflict but made multiple statements of approval throughout the board hearing.

Choe also said throughout the various hearings that he would support the plan if it included 500 units of affordable housing and met other community demands.

Choe denies all charges, claiming Monday evening that the accusations had “no basis,” “no evidence” and were “besmirching” his name.

“For you to put this on the agenda right before my election — I have a deep concern about [that], not just as a community board member, but as a private citizen,” Choe said. “I really think you should think about this very carefully before you proceed because it’s an embarrassment to the community board system ... all I’ve been trying to do is be a good community board member.”

Board member Cody Herrmann spoke up for Choe, stating that the timing was suspicious especially because several of the alleged incidents took place last year.

Chairperson Gene Kelty said he requested a probe by the Department of Investigation in November, but the process took a long time and the agency didn’t keep the board updated.

Apelian clarified and said that Choe was up for reappointment in April, but City Councilmember Peter Koo (D-Flushing), whom Choe is campaigning to replace, made a recommendation not to reappoint. Queens Borough President Donovan Richards reappointed Choe anyway.

“At that point it just became overbearing to the point that we had meetings and discussions about it and the Executive Committee met and decided to proceed. That’s why we’re here today. Nothing more, nothing less,” Apelian said.

Several members of the public spoke during the public participation portion of the meeting to back Choe. A rally held June 12 to show support for him was attended by several local leaders, including City Councilmember Jimmy Van Bramer (D-Sunnyside) and Assemblymember Ron Kim (D-Flushing).

Apelian said the rally was another demonstration of Choe slandering CB 7 board members. One of the signs said, “While Chuckie profit[s] we perish,” and another, “Don’t crap on us,” was left over from Special Flushing Waterfront District protests.

Only three board members voted not to proceed with the probe: Choe, Herrmann and Harpreet Singh Wahan. Executive Board member Lei Zhao chose to abstain.

With 42 members in favor of pursing an investigation, Kelty will form a special committee to hear the charges. Choe will be allowed the opportunity to defend himself. The committee will then present its findings to the full board, which will take a final vote on whether to remove Choe.