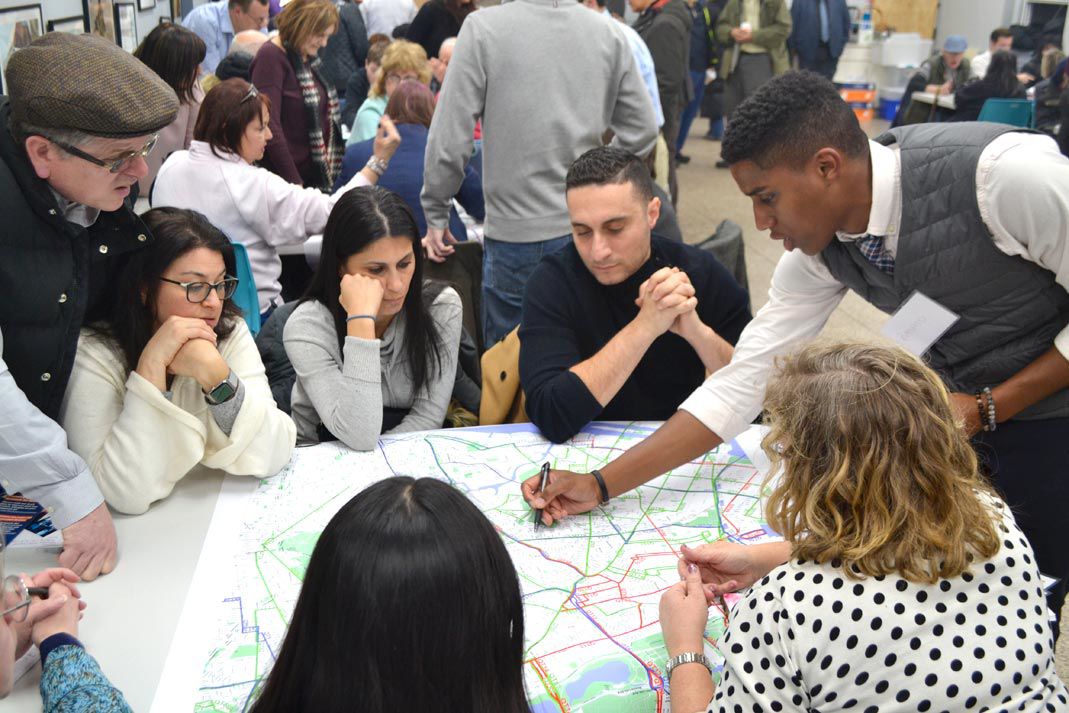 Queens residents had their first chance to give input on the MTA bus redesign plan in Ridgewood Tuesday night. MTA and Department of Transportation officials listened to feedback regarding the plan, which is slated to be implemented in 2021. 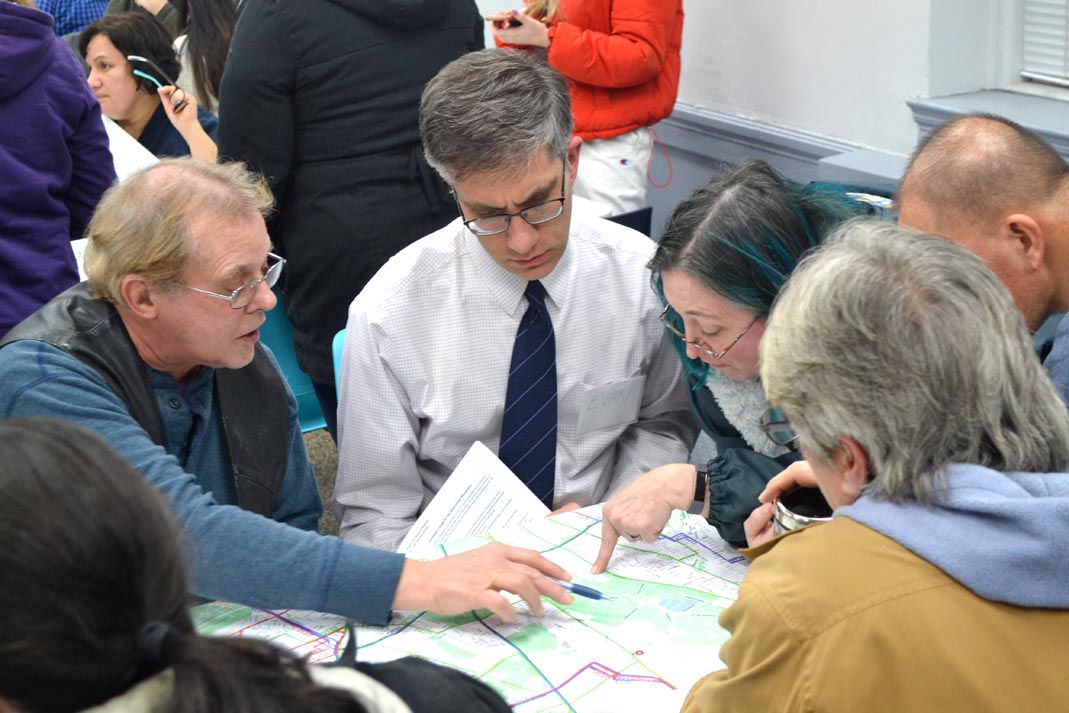 Area residents give input at a workshop for the MTA bus redesign plan.

Queens residents had their first chance to give input on the MTA bus redesign plan in Ridgewood Tuesday night. MTA and Department of Transportation officials listened to feedback regarding the plan, which is slated to be implemented in 2021.

Area residents give input at a workshop for the MTA bus redesign plan.

A woman concerned with losing Q67 service and facing a 25-minute walk to Woodside to get the train to Times Square.

A senior who is looking at a walk of 10 blocks because of changes to the Q38.

A retired driver wondering where bathrooms will be in transit deserts at the end of a bus line.

That was some of the feedback during a workshop on the MTA’s bus redesign in Ridgewood Tuesday night.

The redesign lays out new routes, eliminates others to help achieve a proposed reduction in turns, narrow streets and bus turns to speed rides up. The existing 82 routes would be reduced to 77, with new routes or combinations of them designed to cover all areas.

Residents gave input to MTA and Department of Transportation officials at the workshop.

“I always appreciate anything like this. It’s not people screaming,” John Maier, Community Board 5’s Transportation Committee co-chairman, told the Chronicle days after MTA President Andy Byford faced an angry crowd in Jackson Heights regarding the plan.

He has some issues with the plans such as moving bus stops to subways that aren’t accessible and a route taking people to the bus hub at Parsons Boulevard and Archer Avenue but with no connection to the Long Island Rail Road, meaning people would have to walk or take a separate train or bus. Maier does like the plan to split the Q58 into two lines, one express and one local, with the same destination.

There was a variety of topics borough commuters looked at Tuesday.

Sunnyside resident Brandon Mosley said there is concern in western Queens that service would be reduced along Queens Boulevard, forcing people to walk farther.

“But looking at the plan, that doesn’t seem to be the case,” he said, adding that he liked what he saw at the workshop and the plan made sense to him. “It’s more that bus routes are being consolidated so I think the issue is the way the plan is getting communicated isn’t easy for people to digest.”

Mosley, who lives along the 7 train line, is wondering how the bus redesign will accommodate the trains.

“Often what happens is the subway system and the bus system are treated like two completely separate entities and don’t always coincide with each other,” he said.

Marcos Perez lives in Williamsburg and said it takes about two hours to go see his family in Jackson Heights. Rather than take the G train to the 7 train to a bus, he can Uber there in 20 minutes. But he likes what he saw at the workshop.

“What I like is that they have a new bus going straight from Williamsburg to Jackson Heights,” Perez said. “I think that’s perfect.”

A Middle Village resident said the plan to terminate the Q53 at Queens Center mall would change his commute a lot. And he said not having the Q38 go to the M train in Middle Village would mean walking 10 more minutes and taking another bus.

“It’s not the end of the world but I’d rather not,” he said. “I enjoy my current setup.”

He added, “A lot of my fears are still present but I’m encouraged that they seem open to feedback.”

A series of workshops will be held throughout the borough before the final plan is released later this year. A final plan will be released followed by more outreach to the borough board, community boards and public input sessions.

The agency intends to implement a final version of the plan in 2021.

Examples of changes include the Q54, which runs from Jamaica to Brooklyn along Jamaica and Metropolitan avenues. The new QT3 and QT54 routes would travel instead along the wider Hillside Avenue before connecting with Metropolitan. The QT54 would act like a local bus, with 22 stops in Queens, including six borough stops that would be served by the QT3, serving as an express.

My reading of the plain text of this article does not lead me nor should it lead anyone else to come away with any view other than the bus redesign scheme mostly engendered concerns and requires a substantial redesign of the redesign.

They don't want us driving. They spend zillions of dollars putting in bike lanes. They implore us to use mass transit and then they take away mass transit. NYC make up your mind. You are the most screwed up city since - I can't even remember when. Seriously....want do you want NYC'ers to do? Drive? Take buses? Take trains? Obviously they only want us to walk or use Citibikes!

The positive spin of this article is very misleading. The turnout at this meeting was a fraction of the one in Jackson Heights. You can't compare studies where the sample sizes aren't equal.

When every other Queens publication has denounced this plan as a huge negative and every city councilman in a unified statement is against this plan, how can the Queens Chronicle state that the reviews have been mostly positive? So far, Woodside, Bayside, Jackson Heights, Maspeth, Glendale, East Elmhurst, Whitestone, Bayside, and the Rockaways have opposed the plan in huge numbers. Many of the other communities aren’t even awareness of a redesign because of the MTA’s poor communication. Even Streetsblog which favors the plan, admits it has serious problems that need to be addressed.