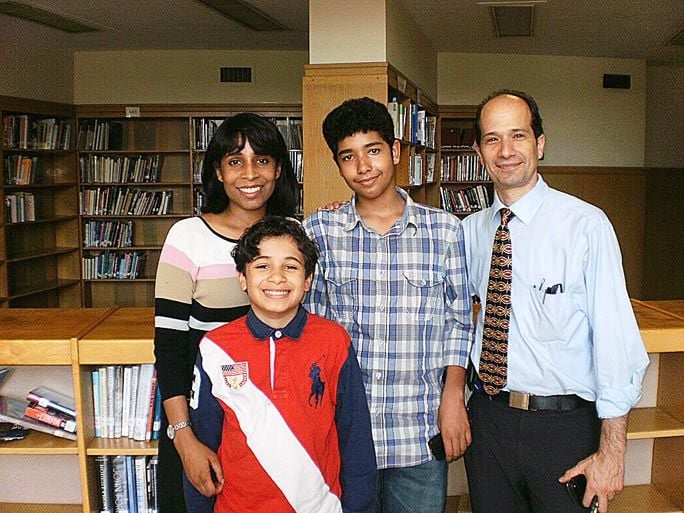 The Pollicino family, at BTECH’s orientation on Aug. 27 with son and future student Giuseppe, center. 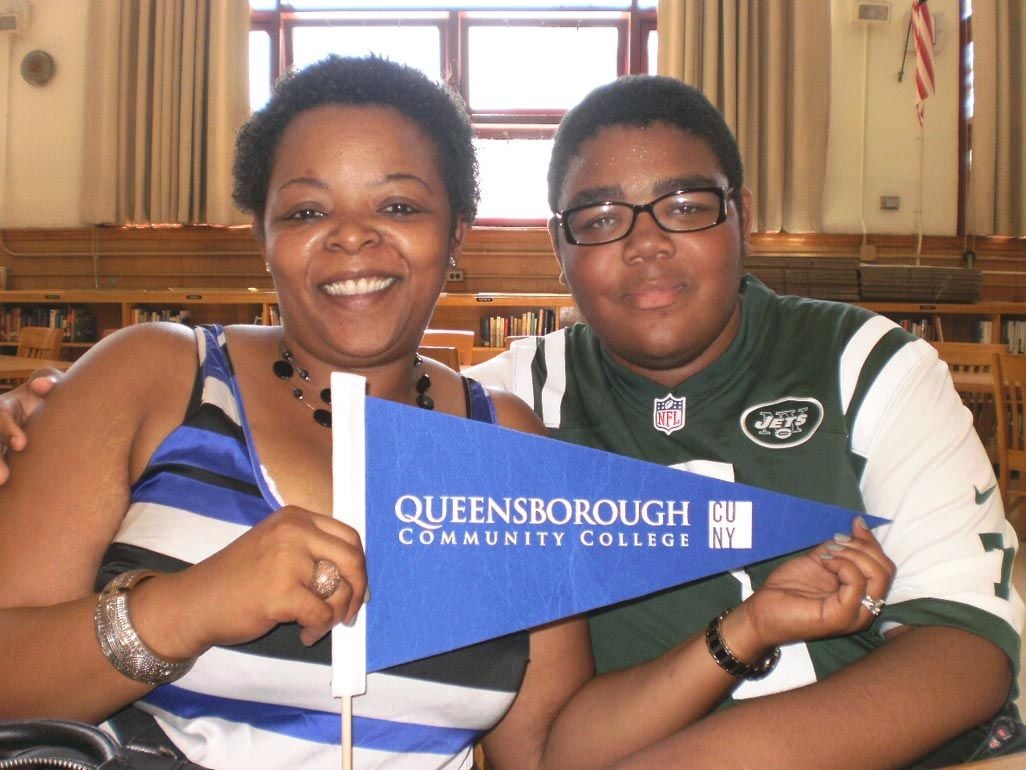 Tracci Jones and her son, BTECH freshman Jaelen Jones, 13, show some QCC pride. As part of the school’s curriculum, students can earn an associate degree from there.

The Pollicino family, at BTECH’s orientation on Aug. 27 with son and future student Giuseppe, center.

Tracci Jones and her son, BTECH freshman Jaelen Jones, 13, show some QCC pride. As part of the school’s curriculum, students can earn an associate degree from there.

To help the new pupils get their feet wet, orientations were held on Aug. 26 and 27, during which the incoming freshmen had the opportunity to tour their future home and become acquainted with some of their soon-to-be teachers.

Among those on hand was 13-year-old Jaelen Jones, who said he and his mother, Tracci, discussed several options before deciding on BTECH.

With a “strong passion for computers,” Jones was drawn to the school, which will emphasize a STEM — science, technology, engineering and mathematics — curriculum, where he looks forward to discovering “how they work.”

For his mother, the chief selling point was the school’s affiliation with SAP, a software developer.

“[It’s] an opportunity to get my son’s foot in the door,” she said. “For me, SAP was the way to go. I see a great future with this program.”

BTECH will enable its students to earn not only a high school diploma, but an associate degree in business systems or engineering technology, while gaining relevant work experience in the business technology field.

The first class of 124 ninth-graders, of which 70 percent are males and 30 percent females, includes approximately 35 percent African Americans, 30 percent Hispanics and 20 percent Asians. About 89 percent of the students are coming from public schools all over the city, with the other 11 percent coming from private schools. About 13 percent of students have individualized education programs.

Each year, approximately 100 more students will be admitted to the school. It is expected to eventually serve about 660 students in grades 9 through 14.

There will be nine teachers on the high school level in the first year.

By the time they enter their third year, students will begin taking college classes on the Queensborough Community College campus.

“We’ll help students determine what direction they want to go in,” she said.

BTECH will share only limited services with Van Buren, such as the library and gymnasium.

Students entering the school participated in the same application procedure as do students in most DOE schools.

“We are not a specialized high school,” Ward said, “but a unique high school.”

The high school staff was recruited by the principal, Hoa Tu, Ward said.

Seven-year teaching veteran Knatasha Hunter of Queens Village will teach algebra and introduction to business and entrepreneurship at the school. Though she said this will mark her first year teaching a business class, she comes equipped with experience in the business world. She was particularly excited by the prospect of working in a brand new school.

“We’re deciding everything,” she said. “The students will help us decide on a mascot and a school song. We have the ability to create our ideal school.”

Samuel Elfarah, 13, of Corona, who will likely be one of Hunter’s students, will have to travel upwards of an hour to get to school every day, but he feels it will be worth it.

“They offer so much. It’s amazing,” he said. While admitting he hasn’t been the best student, he added, “I’m going to try to focus the best I can.”

He is particularly encouraged by the prospect of having an associate degree in six years.

Howard Robinson III, a parent of an incoming student, said, “A good part of it is it’s backed up by a large corporation and a good college. It’s a vision of what a school should be.”

Also on hand at the orientation last week was the Pollicino family, helping 14-year-old Giuseppe acclimate to life in high school.

Giuseppe had been homeschooled, his mother, Bernadette, said. “We felt he was missing out on socialization and being able to collaborate” with others his age.

His father, Anthony, admitted that sending their son to a brand new school came with a certain level of risk, but said, “My son was willing to take that step. He was very excited. He did a lot of research. It made me feel a lot more comfortable.”

“In my family we don’t have that much money,” she said. “My parents didn’t have the opportunity to go to college. This is a really good opportunity for me.”

The school was developed through a partnership between SAP, the city Department of Education, QCC and the Early College Initiative at the City University of New York.

Its mission is to “combine academic excellence with technical aptitude, thus empowering students to be successful in our modern, information-based global economy and community.”

Students will study core topics, as well as develop technical, design and communication skills. Graduates of the six-year program will receive professional certifications and, it is hoped, the workplace experience necessary to give them a competitive edge.

BTECH students will be paired with SAP mentors to help them understand what kinds of careers are available in the information technology field.

According to the U.S. Bureau of Labor Statistics, employment in STEM occupations is projected to grow nearly two times faster than the average for all occupations over the next four years. BTECH is seen as a response to this employer demand.

The school’s path to formation was not without its hardships.

The location was proposed by the Bloomberg administration last year. The co-location led to some opposition within Van Buren and from local officials, including state Sen. Tony Avella (D-Bayside) and Mark Weprin (D-Oakland Gardens) and several civic leaders who felt it was an attempt by the previous administration to destroy Van Buren.

However, the new school did receive strong support within the community and among civic associations after learning more about the school. It was approved by the DOE’s policy-making body, the Panel for Educational Policy, last November.