You have permission to edit this article.
Edit
News
Editions
Opinion
qboro: Arts
Photos
School News
Classifieds
About Us
Sections
Digital Edition
Page One
Sports
1 of 7 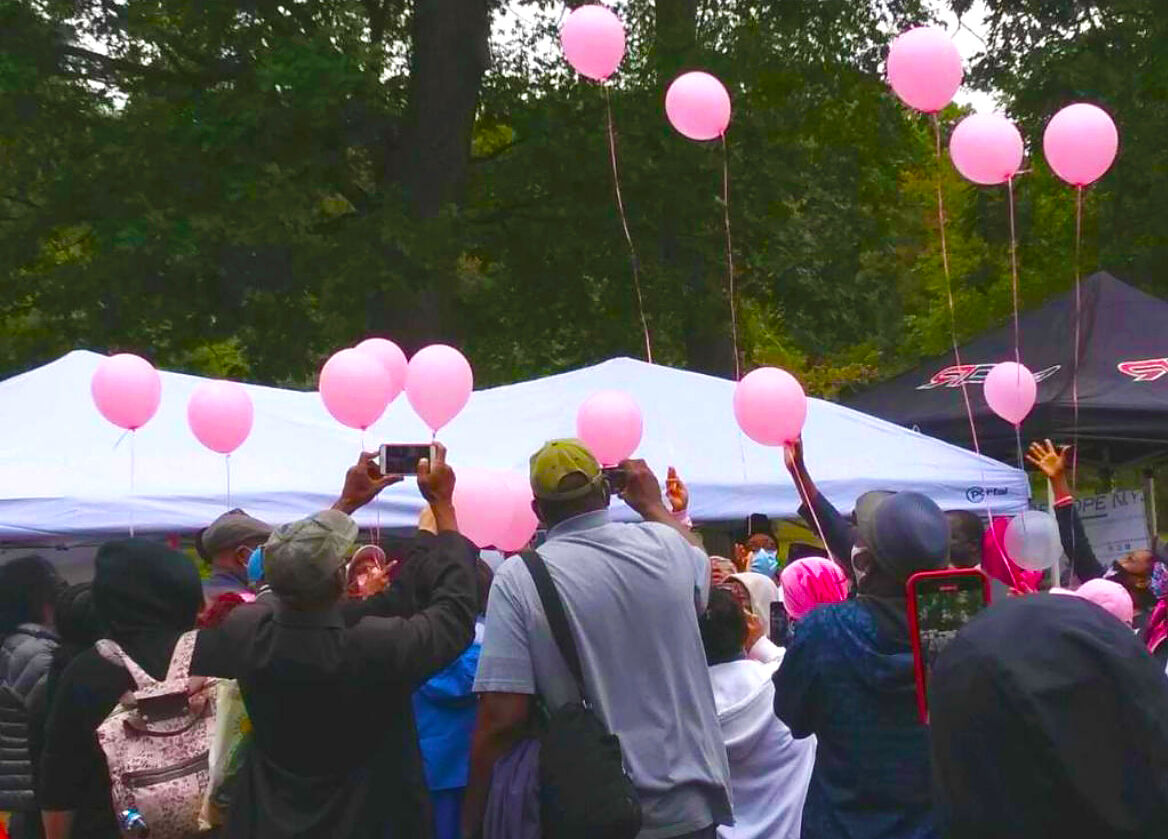 A balloon release for survivors closed out the event. 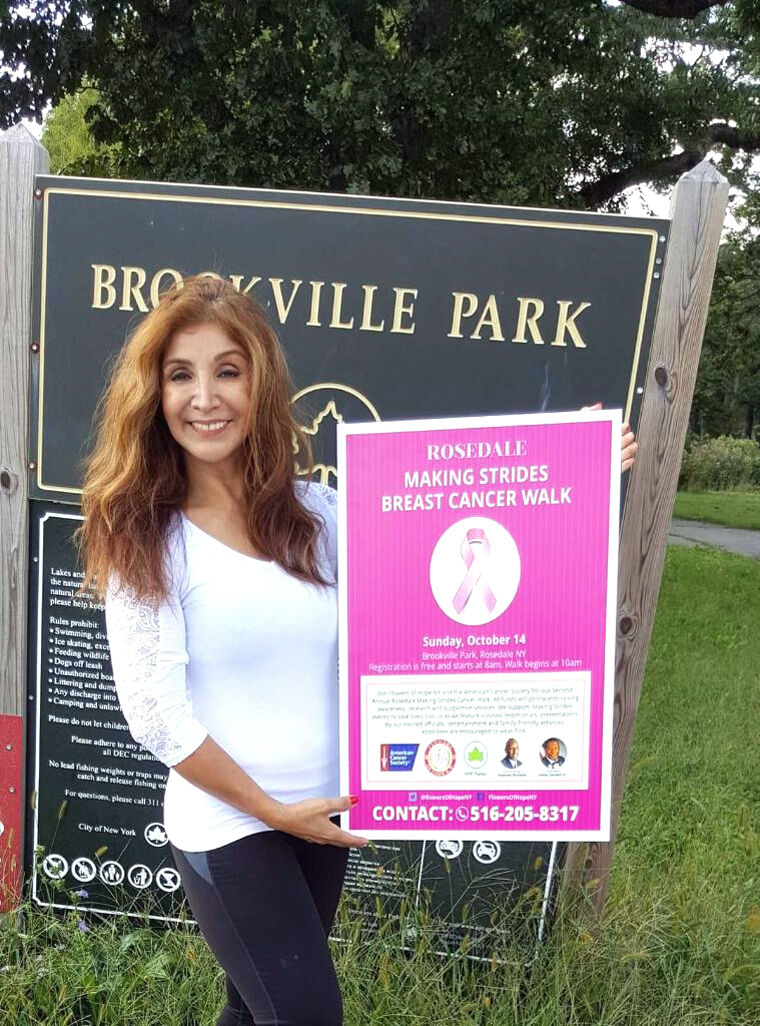 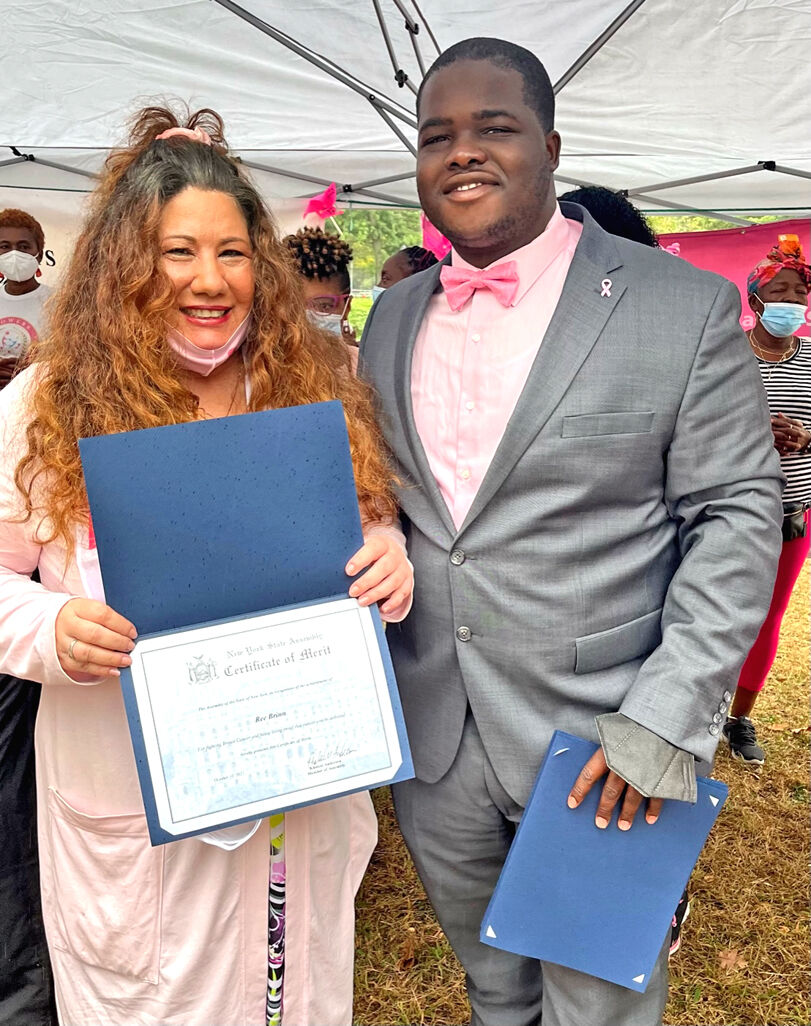 Ree Brinn, left at center, was awarded a certificate of merit by Assemblyman Khaleel Anderson, for raising awareness about cancer. 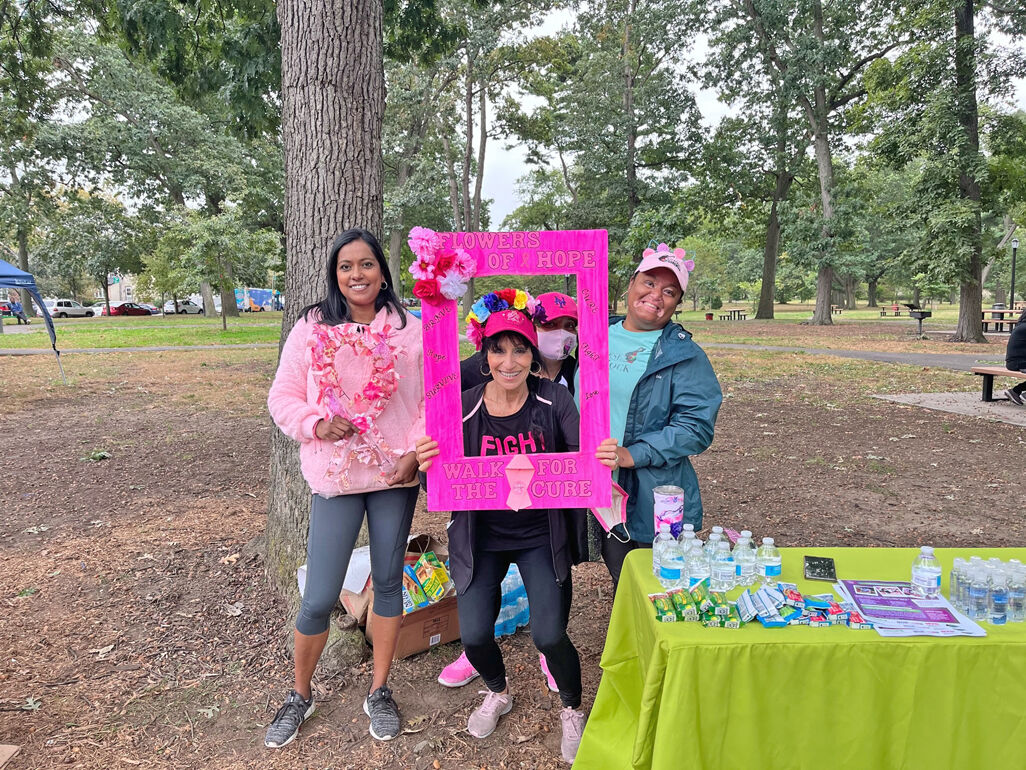 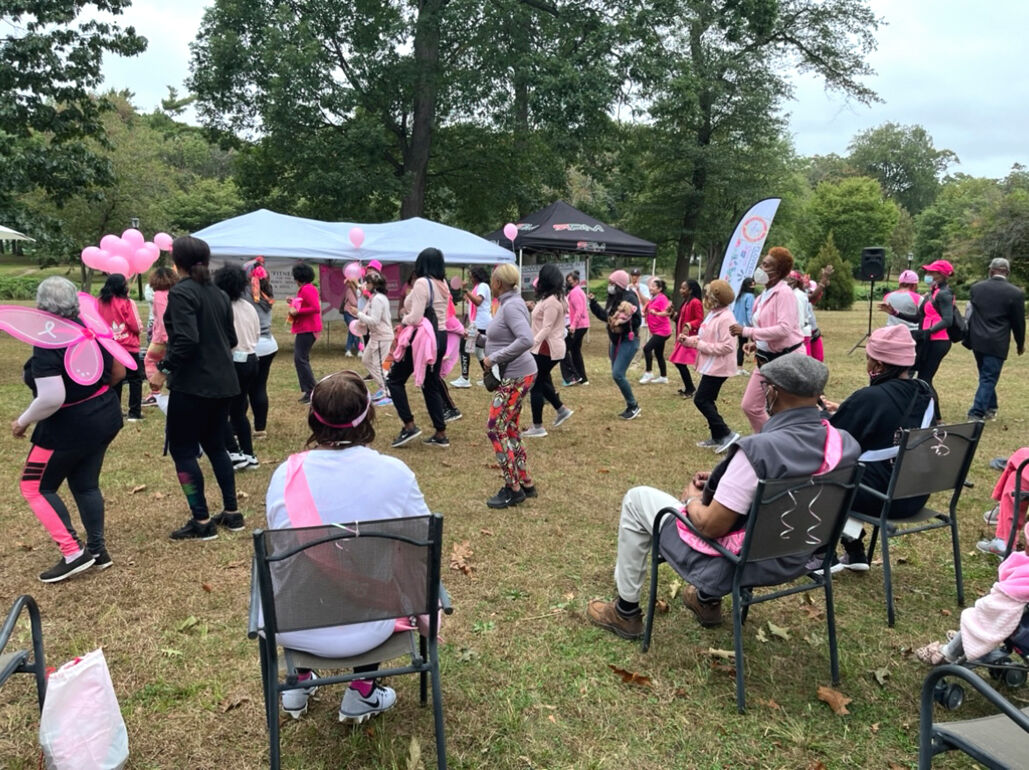 After the breast cancer walk there was line dancing. 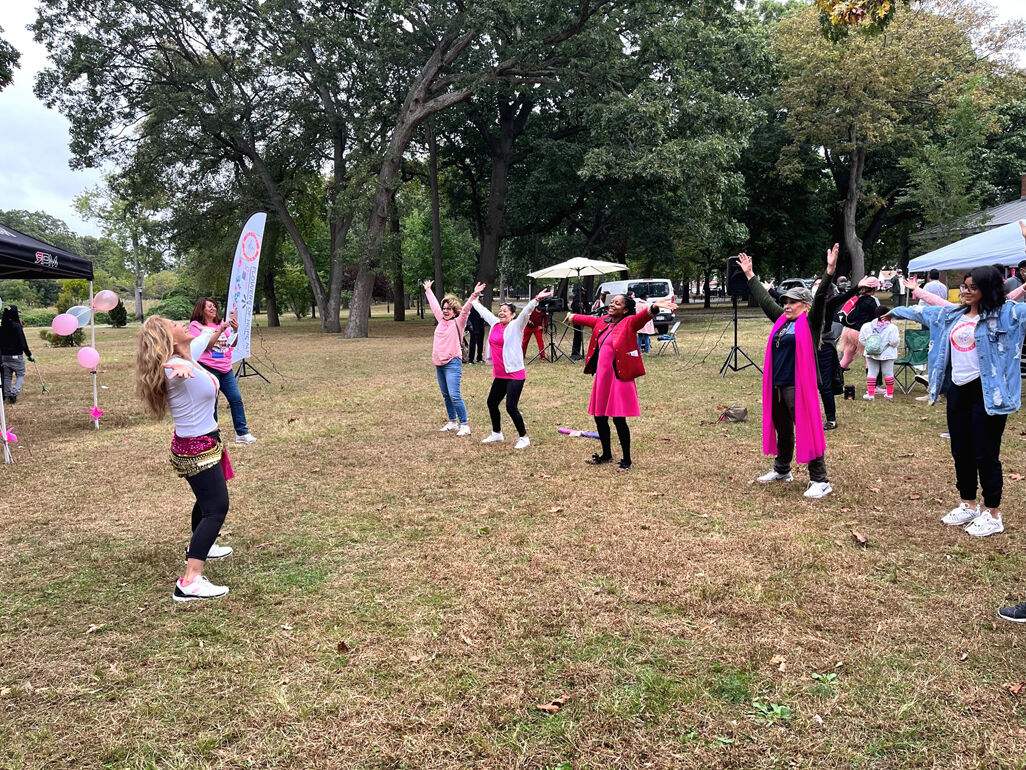 Before the breast cancer walk, Gina Vasquez led a dancercise stretch to the song "Hands Up" from the pop group Ottawan.

A balloon release for survivors closed out the event.

Ree Brinn, left at center, was awarded a certificate of merit by Assemblyman Khaleel Anderson, for raising awareness about cancer.

After the breast cancer walk there was line dancing.

Before the breast cancer walk, Gina Vasquez led a dancercise stretch to the song "Hands Up" from the pop group Ottawan.

The Making Strides Breast Cancer Walk, sponsored by the Flowers of Hope Foundation, was held on Sunday, Oct. 10, at Brookville Park in Rosedale and had approximately 400 people in attendance.

“The turnout was wonderful,” said Gina Vasquez, the founder of Flowers of Hope. “There was a rain forecast earlier in the day and I wasn’t sure how many people were going to show up.”

The event honors survivors and remembers those who lost their lives to the disease.

Making Strides has annual walks each October during Breast Cancer Awareness Month, and was founded by the American Cancer Society, which is dedicated to providing help to people fighting cancer, cancer research, early detection, treatment and education. Making Strides has the largest breast cancer event network across the nation and uses the occasion to raise funds for groundbreaking breast cancer research, patient services like free rides to chemotherapy sessions, information about free places for cancer treatment and a 24/7 cancer helpline.

The Flowers of Hope Foundation is a nonprofit that helps marginalized groups to fight hunger, raise the standards of healthy living, assist with providing old age homes, sponsor sanitary pads to teens in high schools and raise cancer awareness, according to the charity.

“I founded it in 2016 with the goal of creating better health and wellness in my community,” said Vasquez. “My son is a cancer survivor.”

Vasquez, who resides in Rosedale, has a son, Jerry Rengel, 33, who was diagnosed at 17 with osteosarcoma, a form of bone cancer, in 2005, a year after she had started her internship as a clinical social worker at a cancer unit at Elmhurst Hospital. Inspired by the support she received from friends, family, co-workers and the ACS, she decided to create her own charity to help people in Eastern and Southeast Queens and held her first breast cancer walk in 2017.

“A lot of times these events are 30 minutes away in Jones Beach and Flushing. I wanted to have something here in my community that promotes wellness,” said Vasquez. “It is important to have checkups every year because prevention is important.”

Apart from skin cancers, breast cancer is one of the most prevalent cancer types among women, according to the ACS. In 2021, the group says approximately 281,500 new cases of invasive breast cancer are to be diagnosed in the United States and an additional 49,290 carcinoma in situ (the earliest form of breast cancer, which is noninvasive) cases will be identified.

State Sen. James Sanders Jr. (D-South Ozone Park) is a co-sponsor of the walk, as well as other breast cancer events in the community.

Sanders agrees with Vasquez that scheduling annual physicals and mammograms are essential to help fighting the disease.

“October is a month filled with fun autumn activities and beautiful scenes of foliage,” said Sanders. “It also is a month devoted to breast cancer awareness, an annual health campaign, where communities gather and host walks, share knowledge, and celebrate survival. Breast cancer is the most commonly diagnosed cancer and the second leading cause of death among woman in New York State ... Early detection can make all the difference in winning the battle against this.”

Honored with an award at the walk for her own events raising cancer awareness was Ree Brinn of the Queens Chronicle, who said she is thankful for the support she receives from Publisher Mark Weidler for putting on her community events.

In 2012, both of Brinn’s parents passed from pancreatic cancer.

“It’s an honor to serve my community,” said Brinn. “It means a lot to me to keep my promise to my parents to continue my work.”

Estimates for how much the breast cancer walk has raised are not in as of yet, according to Vasquez.

Pink is the color for Breast Cancer Awareness Month, but as October is also Domestic Violence Awareness Month, Sanders encouraged people to wear purple too during the walk to highlight that issue.

Sanders sponsored a bill, S.1789, which was signed into law this year, to provide extra protections for victims of domestic violence. Just as communications between rape victims and counselors are privileged and cannot be disclosed in court except under certain circumstances, Sanders’ law provides a similar measure of confidentiality for domestic violence victims and survivors, according to the senator. The measure had been designated a priority bill this legislative session by the New York State Coalition Against Domestic Violence.