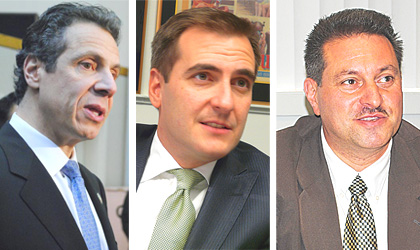 Measures approved last week by the state Legislature and Gov. Cuomo, left, have come under fire from some lawmakers including Queens state senators Mike Gianaris, center, and Joe Addabbo Jr. All three are Democrats, but Cuomo relied on the Republican Senate majority to get the measures through. 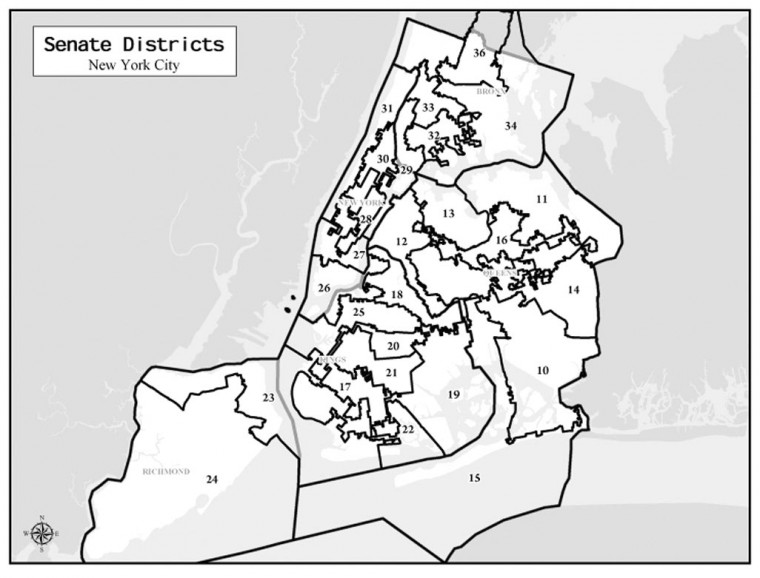 Measures approved last week by the state Legislature and Gov. Cuomo, left, have come under fire from some lawmakers including Queens state senators Mike Gianaris, center, and Joe Addabbo Jr. All three are Democrats, but Cuomo relied on the Republican Senate majority to get the measures through.

Queens legislators and some good government groups are lashing out at an agreement reached in Albany during a session that ran into the early hours last Thursday morning on a number of unrelated issues, including redistricting, pension reform and casino gambling, saying it was a “dirty” back-door deal that kicks the public in the gut.

Gov. Cuomo and legislators also reached a deal on statewide teacher evaluations and an expansion of the state’s criminal DNA database at the same time.

“There was a dirty deal done that got a whole bunch of issues roped in together,” Gianaris said. “The Legislature had minutes to contemplate bills that were as long as 80 pages because nobody wanted to give us time to debate them.”

Because of that, most of the Senate Democrats walked out and refused to vote on redistricting and the other issues — which they’ve said did not give Republicans the quorum needed to vote. Republicans said they had a quorum.

Redistricting happens once a decade, after the federal Census numbers are published. A group of legislators, led by party leaders, redraws the lines for Assembly and state Senate districts. They are also tasked with redrawing the Congressional lines, but this year failed to do so and a panel of three federal judges just passed the new lines this week.

After saying in recent months that he may veto the proposed political lines if he believed them to be gerrymandered, Cuomo ultimately supported the redistricting deal because it includes a constitutional amendment and legal statute that establishes an independent redistricting commission to preside over the redrawing of Assembly, state Senate and Congressional lines the next time it happens, 10 years from now.

“This agreement will permanently reform the redistricting process in New York to once and for all end self-interested and partisan gerrymandering,” Cuomo said in a prepared statement. “With the Legislature agreeing to pass this historic constitutional amendment twice by a specified date, and passing a tough statute that mirrors the amendment, we have taken a major step toward finally reforming the state’s broken redistricting process.”

Some good government groups, including Citizens Union and the League of Women Voters, have praised the constitutional amendment, though Citizens Union has emphasized it did not support the 2012 lines as drawn.

"Given the long standing resistance to enacting redistricting reform, and the high stakes involved, we applaud them in finding common ground on an issue that is at the core of political power in Albany and results in the legislature giving up power in the drawing of lines," Citizens Union said in a prepared statement.

Citizens Union also echoed criticisms of the way at which the amendment came about.

"Though this is a substantive victory for reform, it is tarnished because the process that produced this welcomed outcome occurred during a night where in typical Albany fashion nothing was agreed to until everything was agreed to," the group stated. "Achieving reform through middle of the night voting and limited debate on such an important issue is not the way we would have wanted to see redistricting reform realized."

“Unfortunately, last week, in an ugly dead-of-the-night session, marked by last minute bills and secret negotiations, the Legislature adopted a set of horribly gerrymandered state district maps,” CCNY said in a prepared statement. “The new senate map, in particular, set a new low standard for putting political self-interest ahead of the public interest. Even more disappointing, Gov. Cuomo broke his promise to vet gerrymandered maps and signed these bad maps into law.”

Originally, the group tasked with redrawing the lines — the Legislative Task Force on Demographic Research and Reapportionment —proposed moving the block where Gianaris lives into the district represented by state Sen. Jose Peralta (D-Jackson Heights), which would have forced him to run against Peralta in a Democratic primary. The lines that were passed no longer would pit Gianaris against Peralta. Still, the Astoria legislator said the districts for Queens, and the state in general, are “terrible” and a “horrible product.”

Other Senate Democrats agree with their colleague, and they filed a lawsuit last Thursday that challenges the creation of a 63rd Senate district upstate, which is likely to help Republicans in the upcoming election because the area typically votes conservative.

“In a time when people are calling for a more efficient, smaller government, we’re expanding the Senate for obviously political reasons in an election year?” state Sen. Joe Addabbo Jr. (D-Howard Beach) asked.

Addabbo also criticized the final lines — which could be changed depending on what happens with the lawsuit. Additionally, the U.S. Department of Justice has 60 days to review the lines to ensure they comply with the Voting Rights Act of 1965, which was passed to ensure minority communities were not disenfranchised.

“They split up communities,” Addabbo added. “Ridgewood, Woodhaven and Ozone Park have been split up, and it’s wrong.”

“The fact is, we didn’t even get to fully debate the redistricting bill, which is horrendous,” Avella said. “The people’s elected representatives were denied the ability to debate the bill, and I blame the Republican leadership and the governor for that.”

While Assembly Democrats, who are in their chamber’s majority, had less criticism than their Senate colleagues, Assemblyman David Weprin (D-Little Neck) slammed the lines. He said the map for Assembly District 24 would divide the South Asian community and crack apart neighborhoods that have a long history of collaborative advocacy and civic engagement.

“I made a promise to my constituents that if the proposed redistricting maps divided communities of interest and reflected gerrymandered districts, I would vote no on the bill,” Weprin said. “Last night I kept that promise.”

As for the other issues, Addabbo and Gianaris said they had essentially no time to review the measures that were passed.

“The bills, some of which are 80 pages long, get rushed — what’s the necessity?” Addabbo asked. “We could’ve voted on these next week. Why do you have to pass this bill on March 14 at 11:30 at night? It smells; it stinks.”

Under the pension reform, most future government workers would not begin to receive their retirement benefits until the age of 63 and would have to funnel more of their salary into the pension fund.

Legislators also agreed to amend the state constitution to allow seven privately owned casinos. The public will get a chance to vote on this matter, which is expected to happen in November 2013. Legislators will also have to vote on the matter again next year.

That would allow traditional casino games like blackjack and craps to be played at Resorts World New York, the racino at Aqueduct Race Track.

Legislators also signed off on a new teacher evaluation system that sets up annual assessments based on students’ test scores and classroom performance.

Meanwhile, the Congressional lines approved by a panel of three federal judges who said they were forced to adopt the districts following an “unwelcome failure of government” would eliminate U.S. Rep. Bob Turner’s (R-Queens, Brooklyn) district, as well as a district upstate that is being vacated by a retiring Democrat.

Turner, who originally said he would run in whatever district he was placed in —which would have meant challenging U.S. Rep. Greg Meeks (D-Jamaica) in a minority-heavy area — has instead opted to vie for the seat represented by U.S. Sen. Kirsten Gillibrand (D-NY).