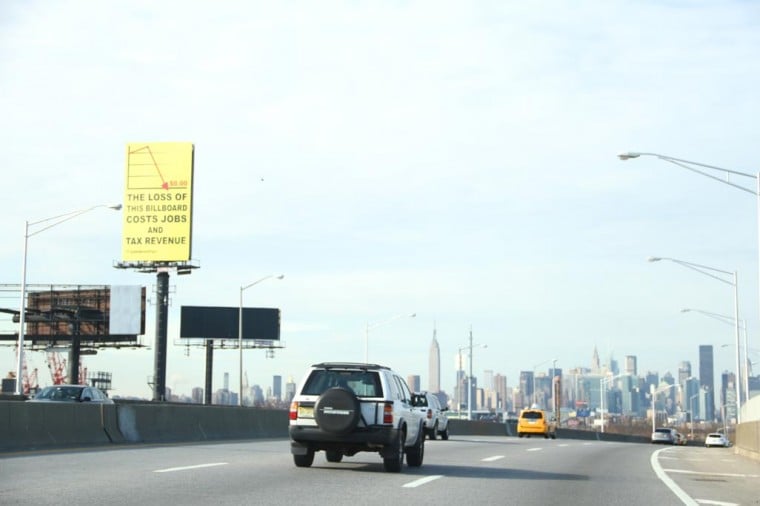 Two billboards on the south side of the Long Island Expressway display no advertising while a third makes a point about the economic impact of empty billboards. 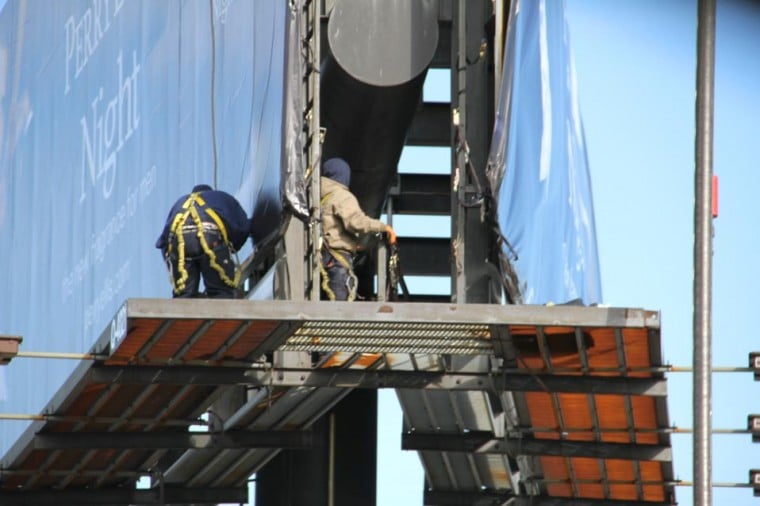 Wokers prepare to change or remove the face of a billboard just north of the LIE in Long Island City. This sign has been cited by the city at least twice.

Two billboards on the south side of the Long Island Expressway display no advertising while a third makes a point about the economic impact of empty billboards.

Wokers prepare to change or remove the face of a billboard just north of the LIE in Long Island City. This sign has been cited by the city at least twice.

Cries to “Buy!” sometimes seem inescapable. But, on building tops and along arterial highways, commercial signage is disappearing.

That is due to what billboard owners and operators described as apparent increased enforcement of laws which require stricter regulation for outdoor advertising signs near parks and along the city’s express travel corridors.

The result is apparent on the Long Island Expressway from just off the Queensboro Bridge to New York’s city limits — dormant signs, some with blank white faces, many vandalized, or just bare skeletal structures.

Many of the signs have come down because of two provisions. Billboards are not allowed within 200 feet of an arterial highway or park, and a sign’s surface area must not exceed 500 square feet. Signs built before 1979 have a grandfathered exemption.

Local Law 31, which went through a hard-fought legal battle, is another reason the outdoor advertising industry is wringing it’s hands. The city appears to be ramping up permit enforcement that distinguishes between using a rooftop sign to promote an on-premises business and advertising for a product or business that is not on-site. Violators can be fined up to $25,000 for a single offense.

While the difference may seem like a small one, the city makes a very clear distinction and it appears that it is now cracking down on owners and operators who use their business accessory permits to sell advertising space on their signs.

Marty Judge, a sign owner and operator who has been very outspoken about what he sees as a detriment caused by LL31 and the new enforcement, explained what the business used to be like.

“For a very long time the billboard business was loosely regulated by the city and people would use business signs as billboards,” Judge said. “People would obtain permits for one sign and use it for another.”

Now that the city is ramping up enforcement, fear and a sense of entitlement by those in the outdoor advertising business who have been skirting the law for years are compelling business owners and those in related industries to speak out.

“So many people are out of work from this law. It’s amazing in this economy to try to do this and put all these people out of work,” Ramsburgh said. “I used to have 50 employees and they’re down to eight — and they’re not working full time. It’s had a big impact on a lot of businesses: on the printers, the people who design it, the truckers ... the suppliers ...”

An industry insider who declined to be named said that he thinks both business owners and the city shoulder some of the blame.

“The ultimate sadness to me is — when you don’t enforce laws for 15 years you invite people to break them ... and then they get really upset when they get caught ... and that’s really unfair to everybody,” he said. “To a degree New York [City] has a culture that has allowed this to take place.”

The New York City Department of Buildings, the agency charged with enforcing the billboard laws, ignored repeated calls for clarification.

Mogul Media Inc., an outdoor advertising company, was cited five times last year at three separate locations, each in a different borough. Two of the billboards displayed promotions for the New York Hall of Science in Flushing Meadows Park and Mega Millions, a part of the New York Lottery, both nonprofit organizations.

Judge repeatedly made reference to a provision he says is in LL31 that provides an exemption for copy that promotes non-profits.

He also explained that although the city has the right to fine operators for displaying prohibited copy on their signs, they cannot force owners to remove the sign structures.

“You want to get as much commerce in the city as possible,” Comrie said. “The city needs to look at being competitive. We need to [take another] look at the rules and regulations that cover billboards that are not intrusive in light of making sure folks are not hurt financially by loss of income on billboards. We don’t want businesses in the city to shut down, especially in these dire economic times.”

Comrie said the law was intended to impact billboards near arterial highways but that the language of the law is such that it actually affects all billboards in the city, “to the point where a lot of commerce in the city has been affected.”

Let's just make sure the billboard sign posts are not in the condition as the BQE post that fell down. Just imagine what would have happened if we were so fortunate that there were no casualties on the roadway or pedestrians below.

great I had a accident on the L.I.E. by looking hard for a moment at the billboard if texting is dangerous imagen this huge sing on the side went you drving at a speed of 60 kph good no more accidents near a billboard