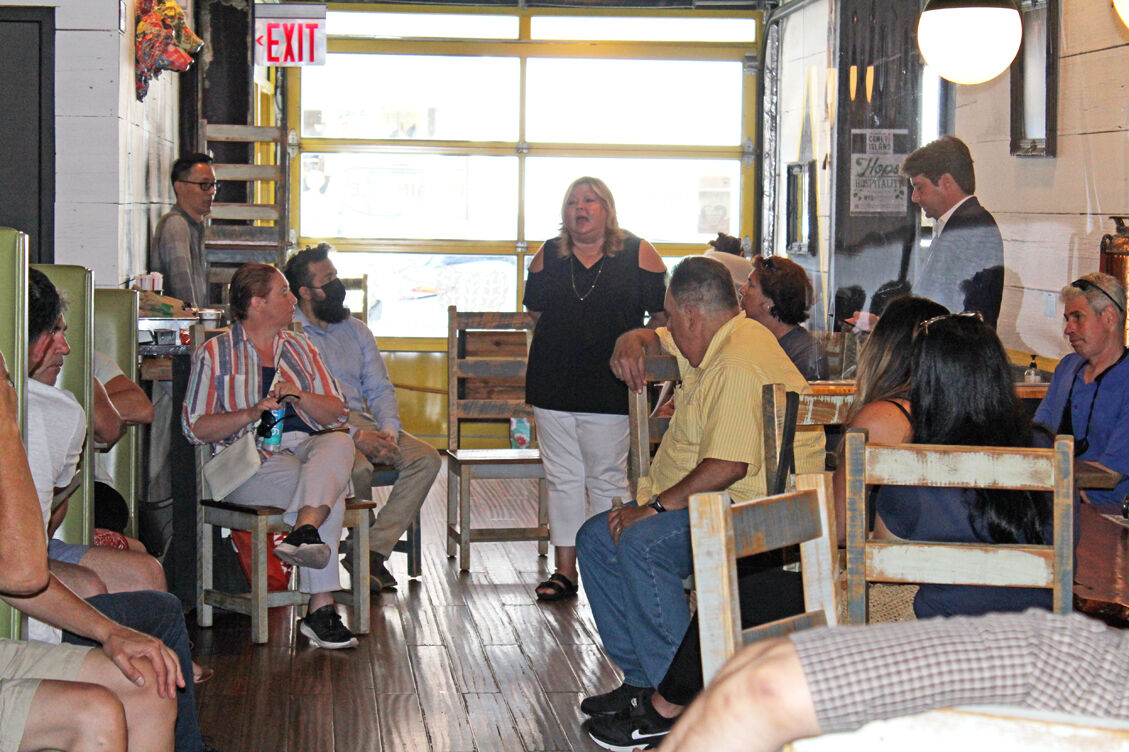 Leslie Brown, president of the Forest Hills Chamber of Commerce, addresses a meeting of neighborhood business owners on Wednesday morning aimed at averting damage they fear is in the offi ng when the city completes its Queens Boulevard bike lane plans. 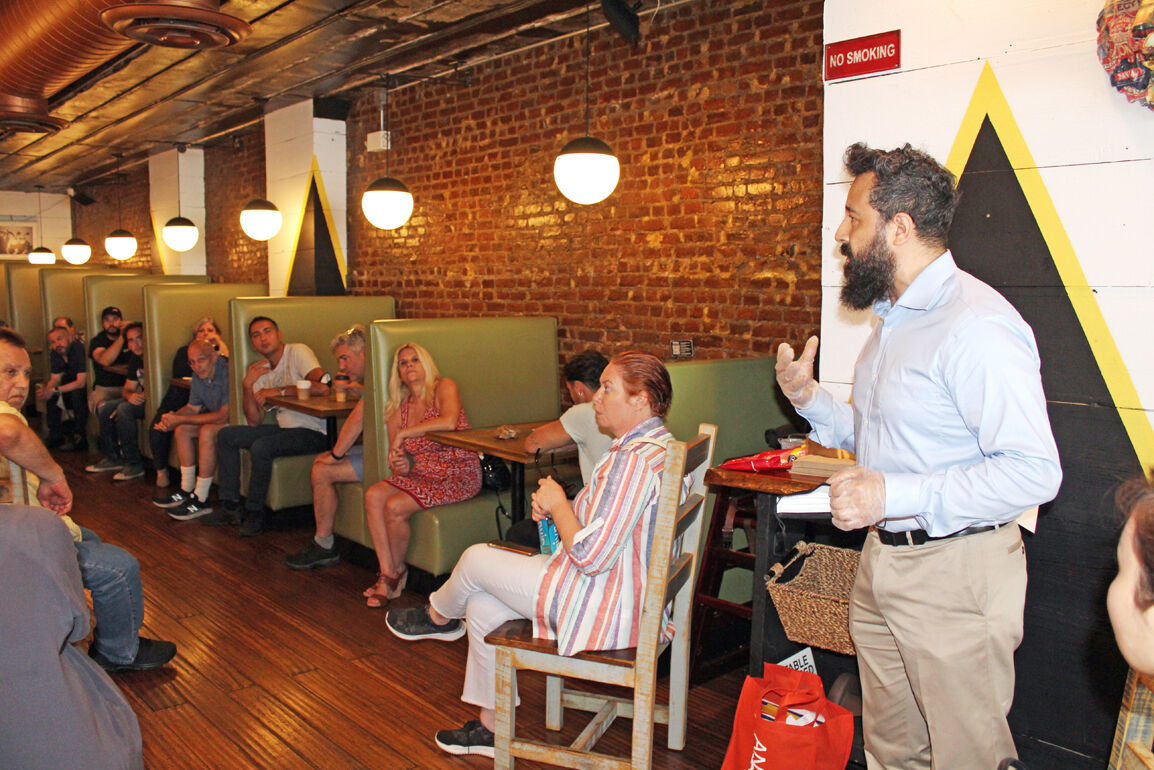 Manny Gomez of Queens Streets for All discuses the possibility of litigation to check or at least stall the city’s plans to add more bike lanes on Queens Boulevard in Forest Hills. Business owners met Wednesday morning to discuss that and other options.

Leslie Brown, president of the Forest Hills Chamber of Commerce, addresses a meeting of neighborhood business owners on Wednesday morning aimed at averting damage they fear is in the offi ng when the city completes its Queens Boulevard bike lane plans.

Manny Gomez of Queens Streets for All discuses the possibility of litigation to check or at least stall the city’s plans to add more bike lanes on Queens Boulevard in Forest Hills. Business owners met Wednesday morning to discuss that and other options.

The Forest Hills Chamber of Commerce brought local business owners together for an emergency meeting on Wednesday to devise a plan to stop the installation of bike lanes on Queens Boulevard, which is set to start this month.

Almost 30 business owners came together at Bareburger on Austin Street to strategize and discuss ideas on how to stop the bike lane construction, which will stretch from Yellowstone Boulevard to Union Turnpike and take out numerous parking spaces. They represented businesses including Spy C Cuisine, 5 Burro Cafe, Austin Street Pizza, Keuka Kafe, Austin Plus Dental, Tap House and more.

“There has to be some kind of litigation or something stronger than petitions or protests that show that we’re really serious,” said Leslie Brown, president of the Forest Hills Chamber of Commerce. Brown owned a children’s store on Austin Street in the 1990s and until 2004.

“I feel like we’re in a fight for our lives because we’re small business owners,” she said. She added that the Forest Hills Chamber of Commerce has struggled with funding through the pandemic, using most of its reserves.

Marla Cornejo from 5 Burro proposed limiting hours of bike lane usage to accommodate commuters. Other participants expressed wanting to hold a protest and gathering more signatures in addition to the 2,000 that Brown has already received. Brown also said legal representation is being sought.

With a new mayor and city councilmembers on their way in, Brown hopes that there’s a chance to upend the plan that she acknowledges is a “done deal.”

“I think that there might be a way when the new administration comes in to maybe fix this,” she said.

Olga and Ollie Sakhno own Keuka Kafe, a wine bar on Queens Boulevard. Olga Sakhno said that many of their customers drive from other neighborhoods like Ozone Park, Briarwood and Richmond Hill.

She said that whether the businesses are directly on Queens Boulevard or not, it affects them similarly since Forest Hills is an “enclave” for shopping, dining, salons and more.

“When you limit our parking space, you are limiting the number of people coming to the area now,” she said.

Sakhno also said people will often wonder what the parking situation will be like at a restaurant before they even ask what type of food is served. There is a disconnect, though, with many of her customers who she said support the idea of bike lanes.

Warren Fink is a real estate agent and owns The Co-op Connection at 112-16 Queens Blvd. Parking along the Queens Boulevard service road has been removed in recent weeks and Fink knows that his block will likely be next.

He says he can’t find parking in the mornings, especially when cars park overnight and all day on Sundays. When he and his employees go to meet with clients throughout the day, finding parking is a recurring struggle.

Maria Sammut is a dental hygienist at Austin Dental Plus on Queens Boulevard, and she says customers were ticketed while they were in the dentist chair on the day when the parking rules changed.

She inquired about nearby parking garages for staff and patients since they don’t find that patients ride bikes to their appointments but found that several garages are at full capacity.

“I think it’s nice and should be supported, but it should be supported in a way that supports our community,” Miller said. “I’m still amazed that they want to shove this through now while we’re recuperating from an economic disaster. It’s really up to us to get together by any means to make our feelings known and to rally those within the community.”

Also in attendance was Manny Gomez from Queens Streets for All, a group that is opposing the bike lanes in Sunnyside; and Ryan Walsh, an attorney with the law firm of Walsh & Gilad. Walsh said that litigation would be the way to slow the plans at this point.

Brown said the meeting was the first step, and that many of the attendees were “new faces” to her, not members of the chamber.

“We’re going to try to come up with some kind of a plan,” she said. “It’s going to have to be more like a litigation plan.”

Now, she will wait for suggestions to be emailed and will hold another meeting for planning.

This redesign - which is so much more than just a bike lane - has not destroyed businesses anywhere along the 5.5 miles where it has already been installed. I'm sympathetic to people being concerned about change, but there is absolutely zero reason to believe that the fear being expressed by the Chamber would come to pass. Indeed study after study shows that building better bike and pedestrian infrastructure improves business for shops along the route. Also shop keepers always overestimate how their customers get to their shops. Always. I have been to dozens of public meetings over the years about various such projects and the exact same laundry list of fears are expressed. And every time after the project goes in, none of them are realized.

Consider this - restaurants are not rushing to take down parking lane dinning even though all inside dining restrictions have now been lifted - and those outdoor dining spaces are a hit. If there was a parking crisis you'd expect more restaurants would be taking these down faster, and dinners would not be able to reach the restaurants. The very success of these spaces proves that the Chamber's lost parking claims are false.

DOT did a study of parking in the Forest Hills main business district - including Austin Street, Queens Blvd and adjoining side streets. It found that 40% of parking spaces were occupied by the same vehicles for over 6 hrs every day - most likely by by shop owners and employees. This in an area that has some of the best public mass transit options in the entire borough. Again, if there was a parking crisis, shop owners and their staff would park blocks away and walk in or take the train or bus, but instead they spend time every day feeding the meters so they can use parking instead of their customers.

Lastly, consider that every shop on this corridor sits above some of the busiest subway lines in the City, are serviced by multiple bus lines and are in one of the denser residential neighborhoods of Queens. Every shop is literally in walking distance of tens of thousands of people (bicycling distance of hundreds of thousands more). The idea that any of them rely on customers driving from far away is either simply not true, or a reflection of a poor business plan that has failed to attract the many thousands of potential customers on their doorstep.

Juxtapose these unjustified fears against the huge success the redesign has been. Bike counts are way up but serious injuries and fatalities of all road users are way down. Pedestrian injuries especially have been dramatically reduced in the sections where the redesign has been installed - a 50% reduction!. Also during the pandemic the extra pedestrian space provided room for social distancing. Joggers now have somewhere safer to run. And when the capital project is constructed in the next couple of years, the side medians will be rebuilt and expanded to encompass the new pedestrian and bike spaces. The new wider medians will enable bus stops to be moved to the medians and all buses will be able to run in the express lanes - and thus no longer getting stuck behind parking/turning/double-parked vehicles. It will represent a massive improvement for the tens of thousands of bus riders who use buses on Queens Boulevard. Also, the wider medians will enable new plantings, benches and other improvements that will transform Queens Blvd in to the grand boulevard it was meant to be, making it a much more liveable space for everyone - and a more attractive space for potential customers to visit and patronize the stores along it.

Change is scary, but we now have years of experience showing us that these types of redesigns (and indeed this design specifically) do not harm businesses. It takes vision to enable us to make our community a better, safer, liveable place and I for one am glad that DOT and the City has embraced this vision.

Bikes belong in parks. Sorry, NYC was never designed with bike lanes in mind, as it grew out of the horse & carriage age. I do not believe that businesses haven't been effected by the lack of parking, the increased drive time to get there. But no, I can't wait to take a bus to another bus then walk 1/2 mile to get to a store off Queens Blvd. Change isn't as scary as stupid change.