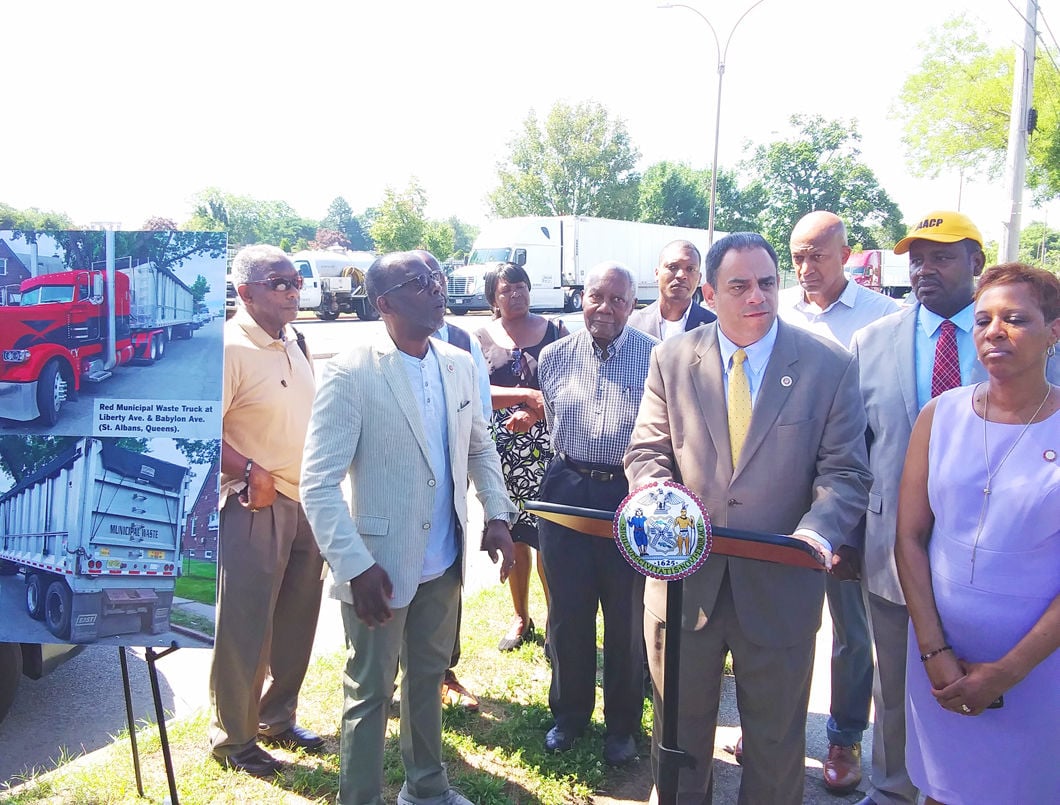 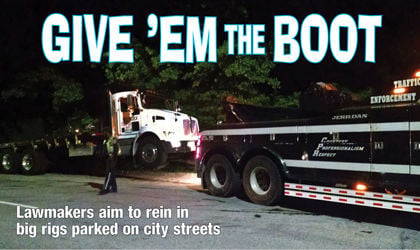 Tractor trailers and other commercial vehicles parked on the Grand Central Parkway service road in Forest Hills have irked area residents for years. And despite repeated towing operations, like one conducted by the 112th Precinct last week, above, the issue hasn’t gone away. But Councilwoman Karen Koslowitz and others have introduced legislation to increase penalties for trucking companies whose employees park where they shouldn’t.

Tractor trailers and other commercial vehicles parked on the Grand Central Parkway service road in Forest Hills have irked area residents for years. And despite repeated towing operations, like one conducted by the 112th Precinct last week, above, the issue hasn’t gone away. But Councilwoman Karen Koslowitz and others have introduced legislation to increase penalties for trucking companies whose employees park where they shouldn’t.

The Queens delegation to the City Council wants to ratchet up the economic pressure on commercial truck drivers who illegally park their rigs on the borough’s streets.

Three large trucks, including a pair of 18-wheelers, served as an unwitting backdrop on Springfield Boulevard in Cambria Heights last Friday as Councilman Daneek Miller (D-St. Albans) announced a pair of bills that have been introduced in the Council to try and rein in the big rigs.

The press conference, held one day after the Council passed a bill that significantly increases fines for everything from illegal dumping to throwing trash from a car window, was billed as a quality-of-life statement by Miller, Councilwoman Adrienne Adams (D-Jamaica) and Councilman Costa Constantinides (D-Astoria), chairman of the Committee on the Environment.

Their location on Friday, at the intersection with 121st Avenue, was no accident.

“There are a few trucks here now, but come here after 4 p.m., especially on Friday and the weekend,” he said, “you could have 20 trucks parked along this road. And they keep the motors running because they’re in the cabs and then need air conditioning in the summer and heat in the winter.”

Not to mention the taking of on-street parking, and, Adams said, the danger of having to walk on sidewalks behind large trucks, largely obscured from view, giving cover to potential muggers and attackers.

Intro. 1011, the Commercial Truck Abuse Reduction Act, would cut the time that a tractor-trailer combination, truck or semi trailer can be parked in half, to 90 minutes from the existing limit of three hours.

A spokesman for Koslowitz said most of their complaints are about trucks parked on the Grand Central Parkway service road.

Intro. 656, the Unlawful Commercial Dumping Act, which passed the Council on June 28, will, when signed by Mayor de Blasio, set a fine of $4,000 for a first offense of commercial dumping, followed by fines of $9,000 for repeat offenders. Vehicles impounded twice will be subject to forfeiture.

The fine for commercial dumping in or near a public litter basket will be $300 for a first offense, then climbing to $400.

Constantinides said CBs 12 and 13 are subject to more truck issues with not only Kennedy and LaGuardia airports but nearby shipping and cargo facilities in an area criss-crossed by major highways.

“We see some of that in my own district, where trucks heading to and from LaGuardia use neighborhood streets even though the state has just [rebuilt] the Grand Central Parkway for them to use,” he said.

Miller said the dumping, aside from being unsightly, has caused a major problem with rats, and, left unattended or unenforced, invites more dumping.

He also said the new bills give DSNY inspectors more authority to search through illegally dumped material in order to find identifying information on the source.

Gadsden minced no words on the truck situation, saying truck owners and drivers are placing money over the health and safety of residential neighborhoods.

“This is an environmental justice issue, which makes it a civil rights issue,” he said. He added that aside from the idling with noise and fumes, sometimes the very contents can be hazardous, citing, among other things, Southeast Queens’ high incidence of asthma and cancer.

“Our most precious resources, our children, have to inhale these fumes as they move about in their community,” he said. Whatever waste is contained in those trucks ... is released into the air and then leaked into the soil.

“These semi tractor trailers loaded with their waste have turned our residential neighborhoods into temporary waste disposal sites.”

Adams and Miller mentioned a heavy-duty tow truck capable of towing 18 wheelers that the NYPD soon is expected to have for use in Queens — it is being paid for Borough President Melinda Katz and a state grant obtained by state Sen. Leroy Comrie (D-St Albans).

But Miller also said the bills for both the trucks and the dumping were the result of a long, often frustrating process.

“We’ve tried to fix a lot of problems by proposing bills only to find that those laws already exist — they just weren’t being enforced,” he said. “These bills were written in a way that encourages enforcement.”

The councilman also said they have tried in both instances to be very deliberate before submitting them to the Council at large for consideration.

He said, for example, that the NYPD has a very direct problem when it comes to seizing big rigs —namely, where to store them.

Miller said he and other community leaders are actively looking for multiple sites they could offer for the NYPD’s consideration.

“We want to avoid unintended consequences,” the councilman said.

BUT why wasn't the increase in fines done a LONG TIME AGO, since this has been a problem for decades that even Councilman Miller's predecessor, Senator Leroy Comrie (three term do nothing council member) and his predecessor, Archie Spigner (the same), knew about when they was in office (that is a total of over 30 years).

AND why keep creating new council bills when LAWS are already on the books. As usual the BIG PROBLEM is enforcement of laws from city agencies from NYPD to DOB. AND then giving lame reasons, why they are NOT ENFORCED.

One has to ask, WHY isn't NYPD enforcing those laws or other laws like illegal fire works in the SE Queens area that start before July 4th all through the summer at all hours of the day.. Why are other laws such as littering, illegal garbage dumping, illegal truck driving on residential streets, illegal curb cuts, illegal conversions and a whole host of other quality of life issues constantly either IGNORED and/or NOT ENFORCED.

Leroy Gadsden, president of the Jamaica Branch of the NAACP stated in this article:

NO MISTER GADSEN, you, Miller, Spigner, Comrie, Katz, deBlasio and all the past and present elected officials placed MONEY over the health and safety of your neighborhoods and constituencies that YOU were supposed to serve and who pay your unjustified salaries.

I mean this issue is nothing new and has been reported by news media, blogs like Queens Crap and Clean Up Jamaica Queens for YEARS and none of you took any type of stand, any type of action, you all sat idly by while so much damage to neighborhoods and people's health took place and the situation became so problematic and unmanageable.

AND if you all were so concerned, why did you allow a major polluting, poisonous and very questionable company, like Royal Waste, plop their HUGE garbage dump right in the middle of thousands of homes and families and right across the street from a big park, Detective Keith Williams Park. They are THE BIGGEST reason for all these trucks and all this pollution causing asthma and cancer.

So KATZ, is this what you mean when you ALWAYS say, "What good is for Queens is good for families" AND deBlasio, a TRUE progressive liberal, would never allow this to happen and if it was happening, would IMMEDIATELY rectify the situation, which you have NOT, because YOU sir are not a progressive liberal, only on paper, NOT in action.

As usual, another article on the same issues that have been plaguing communities for years and decades and pretty much nothing being done to really stop.

Dirty business as usual in the dirty corrupt SE Queens in the corrupt borough of Queens in one of the biggest corrupt cities in the country.

This problem is minor compared to the problem of cops parking in fire hydrants overnight. It has gotten so bad that 2 cops on my block were arguing over who had the right to park by the hydrant.
Recently, they have taken to leaving their cars there for days t a time, even when there is a legitimate space 10 feet away!

Not once did it occur to them that neither one of them has the right to park there.

This will only stop when a house burns down and there is loss of life, then everybody will bemoan the situation, but too late for the poor people who will have died due to the total entitlement that these guys have.