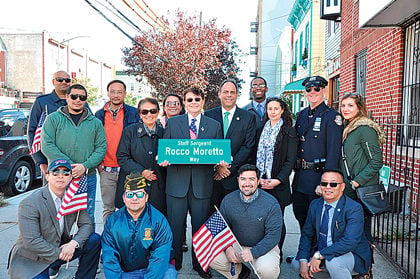 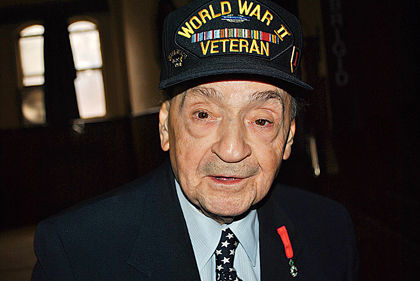 Moretto, a longtime resident of the neighborhood, died in August 2018 at age 94.

Drafted into the U.S. Army in 1943, he was assigned to the 1st Infantry Division — an outfit that saw plenty of combat against the Nazis. It was known as the “Big Red One.”

During a brutal 110-month tour in western Europe, Moretto was one of only two soldiers in a 219-man combat unit who was not captured or wounded.

He landed at Omaha Beach on June 6, 1944 as part of the D-Day invasion of Normandy, France. After a series of engagements with the Nazis, he went on to lead troops through the Battle of the Bulge along the border in Belgium. When the war ended in Europe on May 8, 1945, he was in Czechoslovakia.

The French government in 2004 gave him its highest honor, the Legion of Honor Award, for his bravery as a soldier

After leaving the military, Moretto worked for the Pennsylvania Railroad Co. — what’s now Amtrak — for 40 years. He retired in 1985.

Moretto served on the United War Veterans Council of New York and was post commander of American Legion Post 6.

“Staff Sergeant Rocco Moretto put his life on the line during World War II in the fight for freedom because he always did what was right,” Constantinides said in a prepared statement last week. “He never stopped hearing that call of duty, and continued to serve his community from the moment he came home until his passing last year. His legacy will live on this corner as a reminder of the sacrifice so many have made in the name of freedom.”

“Rocco Moretto lived every single day of his life with integrity. He strived to live up to his division motto: ‘No mission too difficult. No sacrifice too great. Duty first,’” VFW 2348 Member Katina Tsahalis said in her own statement. “He was our hero, our mentor, and most importantly our friend.”

In northeast Queens, a street is expected to be co-named for a different member of the Big Red One who fought the Nazis in Europe: John McHugh of Whitestone, who died at age 95 earlier this year.