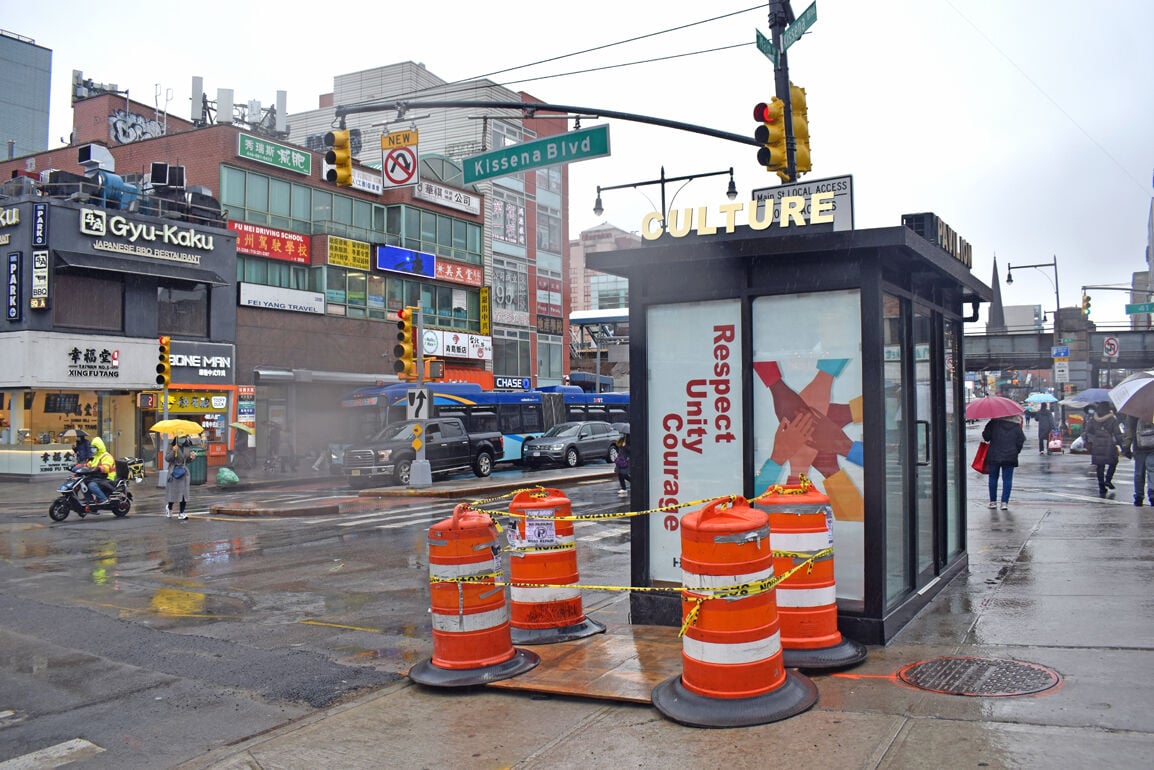 In the wake of the Atlanta massacre that claimed eight lives, six of which were Asian, and several attacks driven by prejudice in its own neighborhood, the Downtown Flushing Transit Hub Business Improvement District launched the “Respect, Unity, Courage” campaign March 18 to reject racism and violence. 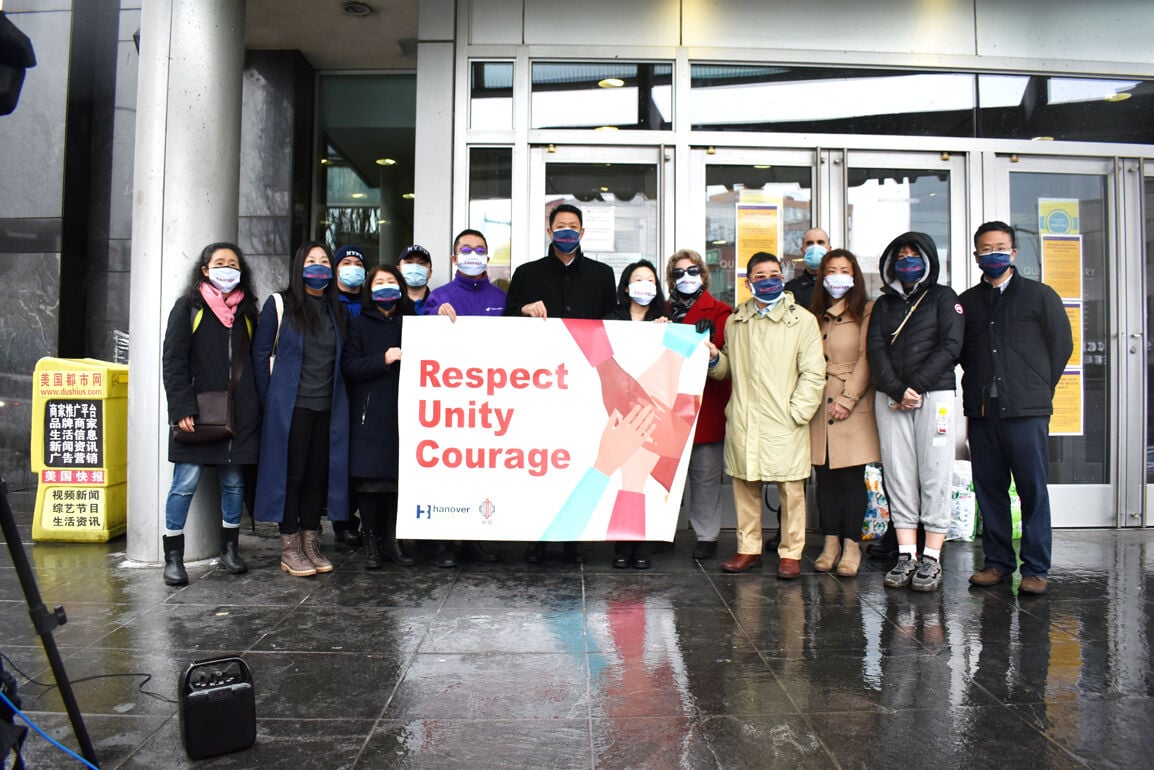 In the wake of the Atlanta massacre that claimed eight lives, six of which were Asian, and several attacks driven by prejudice in its own neighborhood, the Downtown Flushing Transit Hub Business Improvement District launched the “Respect, Unity, Courage” campaign March 18 to reject racism and violence.

The largely Asian community was left reeling after the March 16 massacre in Georgia that left eight people dead, six of whom were Asian-American. A white gunman targeted three massage parlors, allegedly telling investigators that they provided an outlet for his addiction to sex and he wanted to “eliminate the temptation.”

Robert Long asserted that his murders were not racially motivated, but many find the claims hard to believe.

“We are here to denounce a crime — a crime that should not happen in the 21st century. We are united,” Dian Yu said beneath the awning of Flushing Library and wearing a mask that said “Brave.”

The executive director of the Downtown Flushing Transit Hub Business Improvement District was joined by several community members to reject growing racially charged hate across the nation. The BID launched a community campaign, “Respect, Unity, Courage,” to stand in solidarity with victims and to create an environment that fosters love for one another.

Masks like Yu’s, and others reading “Courage,” were distributed to members of the community and a banner encouraging unity was hung on the BID’s 41-17 Main St. kiosk.

According to a March 2 report by the Center for the Study of Hate and Extremism, anti-Asian crimes in New York City increased by 833 percent in 2020. The number of incidents targeting Asian-American Pacific Islanders is so high in Gotham that it’s reported more than in either the entire state of Washington or Illinois. Only California has seen more, according to the study.

“It’s hard to argue that all these thousands of incidents are all [coincidental],” said MinWen Yang of state Sen. Toby Stavisky’s (D-Flushing) office. “In the summer, I was told go back to China on the street. I have been in this country for 20 years and this is the first time that has happened to me.”

As the police were tracking down Long in Georgia, a 13-year-old boy was being attacked in Flushing’s Bowne Playground. According to police, he had been playing basketball when three individuals approached and pushed him to the ground. When he tried to stand up, they struck him in the face multiple times with his own basketball while telling him, “Stupid F-ing Chinese, go back to your country.”

Rep. Grace Meng (D-Flushing) has been one of many elected officials who believe the violence has escalated out of verbal anti-Asian sentiment related to the coronavirus, particular Republicans’ use of the phrases “Kung Flu” and “China virus.” She emotionally spoke at the House Judiciary Committee’s March 18 Discrimination and Violence Against Asian Americans hearing and begged her colleagues to find ways of speaking abut Covid that do not blame Asians.

She took the chance to admonish Rep. Chip Roy (R-Texas), who opened the hearing by proudly stating he despises the “Chi-coms” for their handling of their country and believes that “what they did to hide the reality of this virus is equally deserving of condemnation.” Roy claimed to oppose the racists attacks, but then used lynching imagery to reflect his determination to prosecute wrong doers — “There’s an old saying in Texas about ‘Find all the rope in Texas and get a tall oak tree,’” he said.

“Your president and your party and your colleagues can talk about issues with any other country that you want, but you don’t have to do it by putting a bull’s eye on the back of Asian Americans across this country, on our grandparents, on our kids,” Meng said. “This hearing was to address the hurt and pain of our community and to find solutions and we will not let you take our voice away from us.”

Meng introduced legislation, the Covid-19 Hate Crimes Act, last May, which would create a new Department of Justice position to expedite review of hate crimes reported to federal, state and local law enforcement, but it never moved beyond the Judiciary Committee. She reintroduced it again March 9 and gained support from President Biden, who urged Congress to pass the legislation.

“During my first week in office, I signed a Presidential Memorandum to condemn and combat racism, xenophobia, and intolerance against Asian Americans and Pacific Islanders in the United States ... Now, it’s time for Congress to codify and expand upon these actions — because every person in our nation deserves to live their lives with safety, dignity, and respect,” he said March 19.

Bravo to Grace Meng for standing up to the bigoted Chip Roy. How despicable he is. Asian people living in the USA did not bring the virus. The mass murder in Georgia massacred Koreans not Chinese. The ignorance of so many people is disturbing but then again how many millions of people voted to re-elect the twice impeached, one term, disgraced orange a-hole?