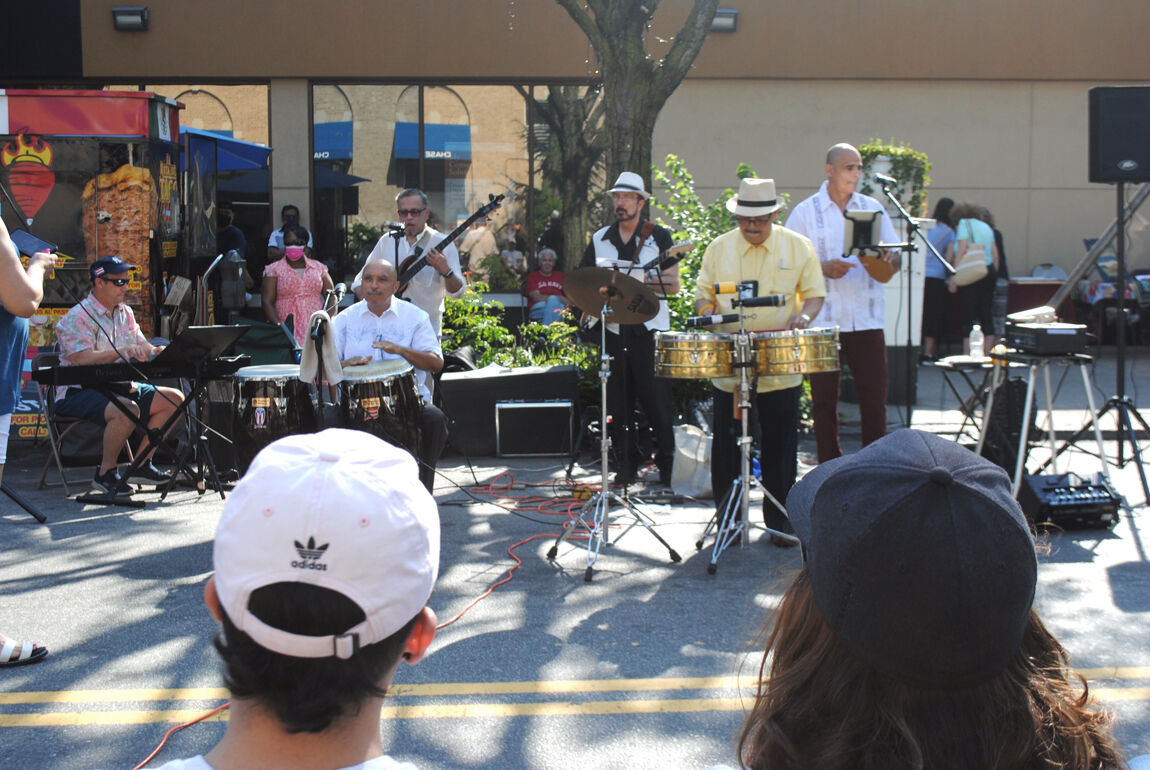 The Benny Lopez Jazz Ensemble plays for a Woodhaven audience on Monday as part of a Make Music New York program in Forest Parkway Plaza. 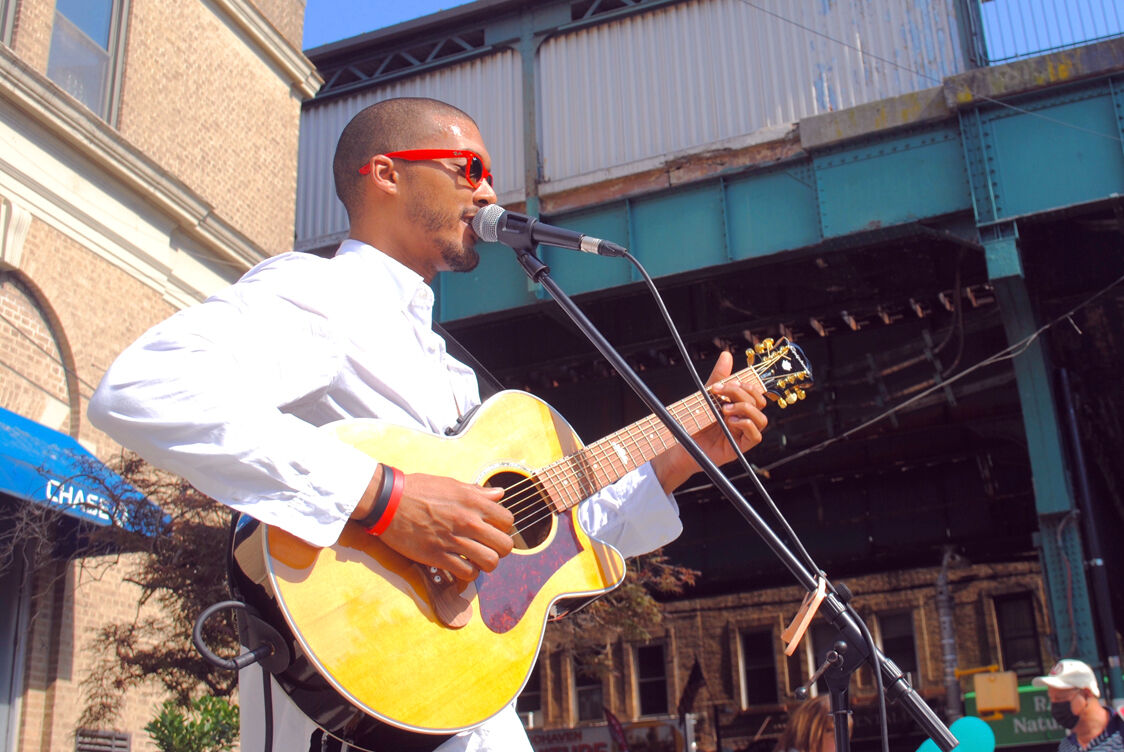 Jay Valera soothes the crowd with a series of contemporary covers. 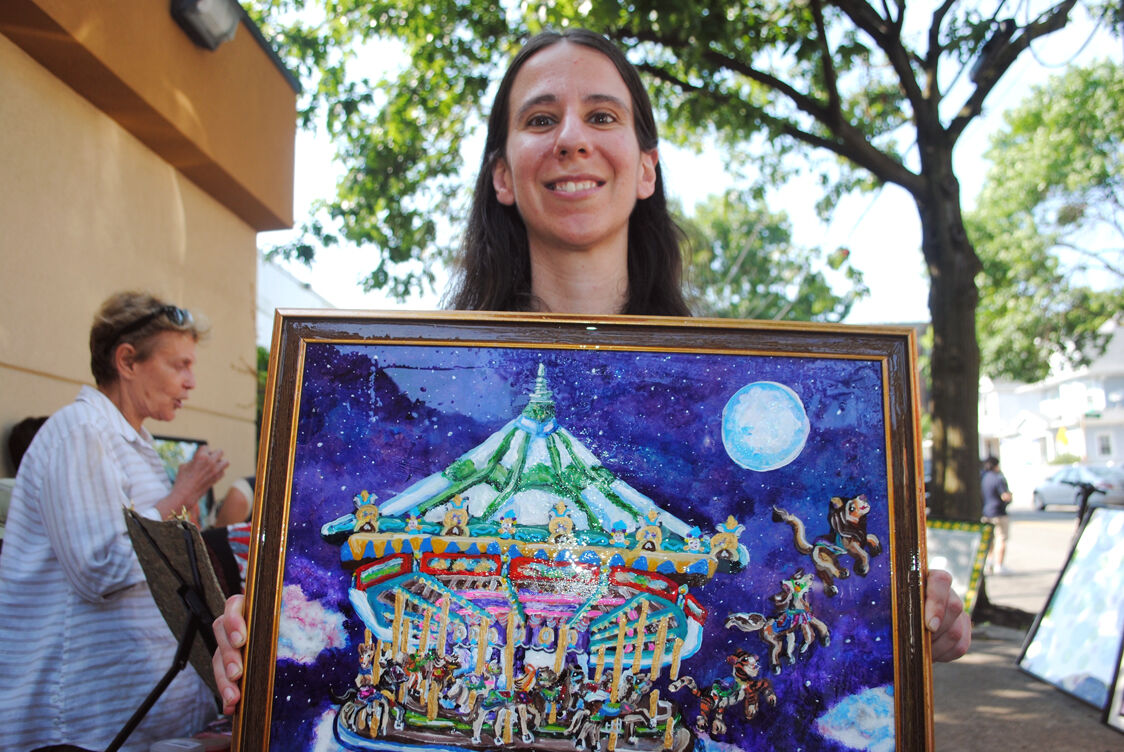 Deborah Camp presents a painting that depicts a fantastical night scene at the Forest Park Carousel.

The Benny Lopez Jazz Ensemble plays for a Woodhaven audience on Monday as part of a Make Music New York program in Forest Parkway Plaza.

Jay Valera soothes the crowd with a series of contemporary covers.

Deborah Camp presents a painting that depicts a fantastical night scene at the Forest Park Carousel.

Just in time for summer, music and art have returned to the streets of Woodhaven, and with it, a sense of joy and togetherness for the neighborhood’s residents.

As a part of a program that organizes concerts in public spaces across the city, the Woodhaven Business Improvement District and Woodhaven Cultural and Historical Society partnered on Monday to present an outdoor concert lineup of three different musical acts.

The organizations worked with the Make Music New York series, a nonprofit that offers free concerts in shared social spaces across the city aimed at bringing communities together. With vaccination rates up and Covid rates subsiding, the event marked a return of public cultural events for the South Queens neighborhood.

The BID’s executive director, Raquel Olivares, said she wanted to give residents a chance to celebrate the neighborhood’s return.

As the sun set on Monday, the BID closed Forest Parkway Plaza in front of Chase Bank to traffic and opened it to a food truck and artists booths in addition to the music. The lineup included the tunes of singer and pianist Kenneth Voisin, contemporary numbers by guitarist Jay Valera and samba, classic rock and jazz by the Benny Lopez Jazz Ensemble.

“Music — that’s what keeps me going. That’s the ticket to my heart,” Benny Lopez, the leader of his group, told the Chronicle.

The event united both musical and visual artists by displaying works from several members of the Woodhaven Art Circle, a community of artists that Ed Wendell of the Woodhaven Cultural and Historical Society assembled to bolster the neighborhood’s cultural identity. During the pandemic, Wendell organized a series of Zoom meetings for artists to network and plan art events.

“We’re hoping the circle will expand to a lot more people because we know there’s a lot more in this community,” said Wendell.

So far the ranks of the artist collective include media from painting to collages and quilting.

Mahfuza Shammy Rahman, an artist who grew up in Woodhaven, who was displaying her oil paintings at the concert, is holding her first in-person exhibition at Geordie’s Joint on Jamaica Ave., with a reception from 3 to 8 p.m. June 26.

Rahman said in creating the series of landscapes that she’ll display in the show, she was thinking about occupation and natural and man-made borders.

“Growing up I never saw brown women doing anything except for being in the house raising children. And now I’m a brown woman,” Rahman said about what it meant to her to hold her art exhibit in her home neighborhood.

Deborah Camp, who does window painting for businesses on Jamaica Avenue when she’s not daubing other shiny canvasses with oil paint, said that her home neighborhood plays an important role in her paintings. She’ll often set fantastic scenes in neighborhood landmarks, like a painting of the Forest Park Carousel at night, where the tiger has come to life and flown away from the platform.

“This is the first time we’ve had an event like this, especially after the pandemic. It’s good to get people to come out and enjoy beautiful things and get inspired,” Camp said.