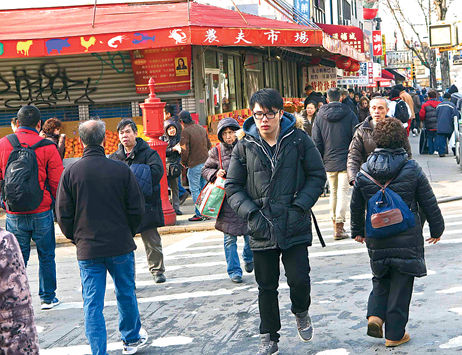 The perception that Main Street, above, and the rest of Flushing, is a “foreign place” concerns Assemblyman Ron Kim, below, though he later said he really was speaking of Queens in general and even other boroughs. Yet many say an impression that Asians are a different kind of minority has an impact. 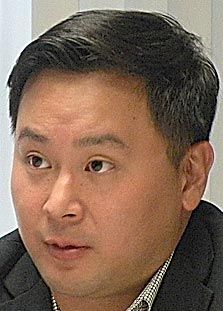 The perception that Main Street, above, and the rest of Flushing, is a “foreign place” concerns Assemblyman Ron Kim, below, though he later said he really was speaking of Queens in general and even other boroughs. Yet many say an impression that Asians are a different kind of minority has an impact.

That’s the term Assemblyman Ron Kim (D-Flushing) coined in a recent email to his constituents, lamenting that Flushing is not taken seriously by city or state agencies because it is viewed as a foreign place.

“Even despite this unfairness and mistreatment, Flushing continues to stay determined and resilient,“ Kim wrote. “But imagine if we actually overcame the Perpetual Foreign Place Syndrome and realize the return on investment toward Flushing?”

In a later interview, Kim explained the sentiment expands beyond Flushing, to places like Whitestone and Bayside, where middle- and working-class families, regardless of race or ethnicity, feel they’re brushed aside by the city and state governments.

“I think it’s all communities in the outer boroughs feeling like they’re not being heard, like every road leads to Manhattan,” he said.

Still, the idea of being viewed as a foreign place especially resonates in a neighborhood like Flushing, where, according to city data, about two-thirds of the population is foreign-born.

Residents here point to longstanding issues like an overburdened infrastructure and increased airplane noise as evidence the neighborhood and surrounding areas are overlooked, even treated unfairly. Small business owners, the vast majority of whom are Chinese or Korean, also complain they are over-targeted with regulations and fines.

Jefferson Mao, an urban planner, moved to Flushing when he was 8 years old. He said it is undeniable that the neighborhood, which has one of the largest Asian populations in the United States, is unlike any other in the city.

“I would also say that, more than being a foreign place, Flushing is probably the most perfect example of a place where people adapt and assimilate to American culture,” he said.

The perception that Flushing is overlooked also highlights a broader sentiment among some in the Asian community that they remain something of a forgotten minority in New York City, underserved by their local governments.

The 2014 placement of a homeless shelter in Elmhurst, another neighborhood with a large Asian population, and a recurrent push to move away from entrance exams as the sole determinant for admission to the city’s specialized high schools, which would likely decrease the number of Asian-American students enrolled, have each been sources of angst within the community.

City officials recently met with the Asian American Federation to discuss the findings of a report released last May, which found that social service organizations serving Asian Americans in New York City received just 3.1 percent of the contract dollars given out by city agencies. That is despite Asians, the city’s fastest growing ethnic group, accounting for about 15 percent of the population.

“There are a lot of challenges in getting people services and serving people in a culturally appropriate way,” said Howard Shih, the federation’s research and policy director. “There’s a lot of things going on. It’s a pretty broad problem.”

Those who make the argument that Asian Americans in New York City are underserved blame a variety of factors, including a perception they are the “model minority” that seemingly is not disadvantaged. Others say it’s perhaps because they are still viewed as perpetual foreigners.

But some say part of the problem also lies within the community itself. Studies have shown that voting participation among Asian Americans is relatively low, in part because a large proportion of them are foreign-born. That holds true in Flushing, which also has been seen by many immigrants as a stepping stone rather than a destination, some say.

“If Flushing is a forgotten community, it’s because of the fact it has become a completely transitory community,” said Paul Graziano, a community activist in Flushing.

David Lee, who has helped organize groups supporting the specialized high school entrance exams, said the community has to do a better job of speaking up about its issues and makings its voice heard.

“The regular people need to take action to be involved, but they’re not all the time,” Lee said.

When Asians began coming to Flushing in the 1970s, the neighborhood was predominantly a white middle-class community. City planners and immigration experts say the influx of businesses that followed revitalized a neighborhood that was on the decline.

Fast-forward 40 years and Flushing’s population has risen nearly 20 percent, while its business community has grown into one of the city’s largest commercial districts.

But this growth has placed a heavy burden on the area’s infrastructure; Flushing-Main Street, the final stop on the No. 7 train, is the busiest subway station outside Manhattan. And the intersection of Main Street and Roosevelt Avenue is among the city’s busiest street corners.

Various ideas have been pitched to help relieve some of Downtown’s congestion, such as a new bus terminal, but business leaders and elected officials say the area hasn’t received enough funding to properly address many of the issues.

“For a community that generates as much revenue for the city as Flushing does, it’s totally out of proportion,” said Dian Yu, executive director of the Flushing Business Improvement District. “We’re not asking for above and beyond. We’re just asking for our fair share.”

Another concern among small businesses is the feeling that they are singled out and targeted by city agencies with regulations and enforcement. As evidence, some point to a 2013 study from then-Public Advocate Bill de Blasio that documented disproportionately higher fines in neighborhoods outside Manhattan.

John Choe, executive director of the Greater Flushing Chamber of Commerce, said many merchants who speak limited English have also had trouble communicating with city inspectors or understanding the rules.

“I think there are some inequalities that are built in that policy makers and public officials don’t know about unless business owners speak up and point them out,” Choe said.

Jack Eichenbaum, the Queens borough historian, was born in Flushing and saw the neighborhood’s transformation. He believes many of the challenges Flushing and surrounding communities face aren’t rooted in their ethnic makeup, but rather the power Manhattan wields.

“This is happening because Manhattan has the power and we don’t,” he said.

Still, if Flushing feels like it is being treated like a foreign place, some residents say it certainly seems like one. Indeed, the Downtown area has the feel of an Asian city, as colorful signs in Korean and Chinese lettering hang outside businesses like restaurants, specialty markets and pharmacies. Shoppers and busy commuters hustle down the sidewalk, while vendors hawk things like fruit and Chinese-language newspapers.

And many longtime residents have expressed feeling increasingly out of place.

“Things have changed,” said one resident who has lived in Flushing for more than four decades, but asked that his name not be used. “But it can be uncomfortable because you don’t feel welcome in some places.”

Not long ago, residents protested the closing of a Key Food grocery store, frustrated nearly all of the area’s supermarkets cater to the Asian-American community. Others complain it can be tough to get American-style cuisine.

Gene Kelty, the chairman of Community Board 7, recalled decades ago a number of European immigrants arrived and didn’t speak English well, but he said they still tried to become part of the community. From a marketing perspective, he said it might make sense to accommodate customers from all ethnic backgrounds.

“If you market to just one group, that’s what you’re going to get,” Kelty said. “If you make it universal, then everyone comes in.”

Still, Choe, of the Chamber of Commerce, said there was bound to be some cultural tension between the newcomers and the old-timers because Flushing changed so dramatically in a short period of time.

In an effort to bring the community together the chamber has organized various events, including the Flushing Night Out, a night market with food and music. And in some ways, Choe said, the issues the neighborhood faces can also help unite people.

“The fact the city and the state haven’t been investing in our infrastructure, by allowing things to fall by the wayside, it’s created a lot of friction within the community,” he said. “I think focusing on the infrastructure is a key way to bring people together of all different backgrounds.”

As an example of the neglect of local concerns by central planning: In the early 1950's an integrated working class community surrounding Macedonia A.M.E. church in central Flushing was seized by eminent domain and converted into Municipal Parking Lot 1. The public Flushing bus terminal which offered off-street shelter and easy change of bus lines, was sold for private development and linked to the new parking lot. This is where Macy's stands today. Plans for a new and needed bus terminal surfaced many times but never reached fruition.

A few years ago the city sold the public parking lot for a below-market price to the privadevelopers of Flushing Commons.

I wonder if Peter Liang would have been convicted he was black?