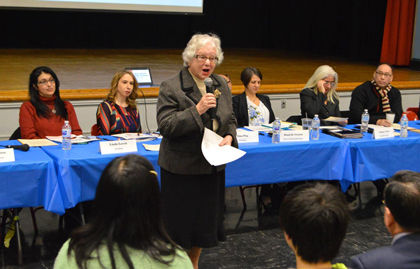 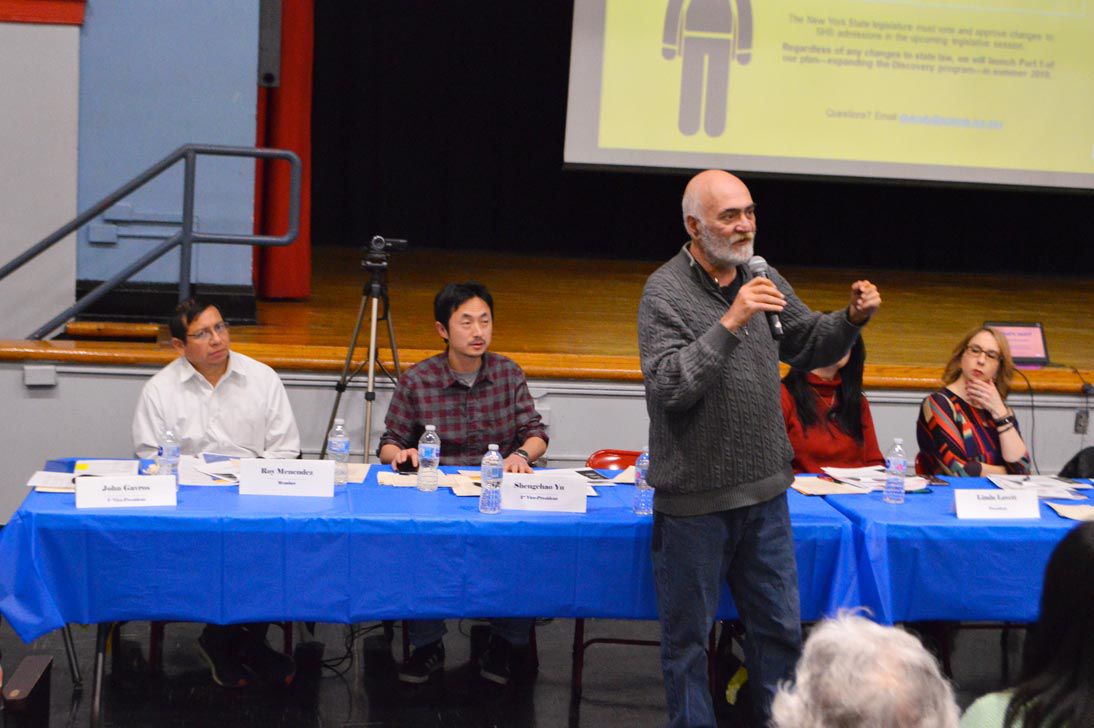 Few, if any, issues in northeast Queens are more controversial than Mayor de Blasio’s plan to ax the Specialized High School Admissions Test.

Per the city’s Independent Budget Office, de Blasio’s proposal will slash the number of seats at the specialized schools for Asian kids by about half. Had the proposal been in effect, the IBO found, only 31 percent of offers to the institutions for the 2017-18 school year would have gone to Asians. In reality, 61 percent of them did.

So, the city officials who came to the Community Education Council 26 meeting at JHS 74 in Oakland Gardens to tout de Blasio’s plan last Thursday didn’t look too surprised when the crowd wasn’t loving it.

More than 100 people packed the school’s auditorium, many bearing placards with slogans protesting the mayor’s plan.

De Blasio has framed his proposal, which would require a change in state law, as a way to fix the deep racial disparities at the specialized schools. Blacks and Latinos, which together form the majority of public school students, account for small fractions at the “elite eight.”

In 2018, Asians received 51.7 percent of offers to the specialized schools and whites got 26.5 percent of them. Just 6.3 percent went to Latinos and 4.1 percent to African Americans.

“We believe that a single exam does not tell the full story of a child’s potential,” said Sarah Kleinhandler, who heads the city Department of Education’s Office of Student Enrollment. “And New York City is the only district in the country that admits students based on a single exam into a school.”

As was explained in the presentation given at the meeting, the mayor’s plan would ultimately have most of the specialized high school seats filled by the top 7 percent of students at middle schools throughout the city, with the remaining spots allocated in a lottery for students who are among the highest-performing ones at their schools.

Compared to the existing system, the mayor’s plan would keep the average GPA level of the students entering the schools the same: 94 percent. But it would slightly decrease their average state exam proficiency level from 4.1 percent to 3.9 percent.

When members of the public offered their comments at the meeting, one of them warned of negative consequences.

“From personal experience, I will tell you that if you cannot get over a 4 on the state test, you will not succeed at Stuyvesant,” said Ethan Lam, a freshman at Stuyvesant High School, one of the specialized institutions.

CEC 26 member John Gavros said getting rid of the SHSAT would “lower the standards of the schools.”

State Sen. Toby Ann Stavisky (D-Flushing) and other supporters of the SHSAT agree that the lack of diversity in the schools is a serious problem. They just don’t think axing the test is any way to solve it.

Stavisky, who sits on the Education Committee, is a graduate of the Bronx High School of Science and taught for a time at Brooklyn Technical High School, two of the specialized institutions.

At last Thursday’s meeting, she hailed the test as “the most objective method to determine admission” and said the city should work in other areas to improve representation at the schools.

“One suggestion to improve the diversity is to have a better outreach program to economically and racially underserved communities,” the senator said. “Most parents, many parents are not aware that these schools exist ... because they do not have access to the information on these programs.”

She suggested that the city offer high-quality test prep to all sixth-grade students, along with practice SHSAT exams.

Braunstein vowed to continue urging his colleagues and Speaker Carl Heastie (D-Bronx) to reject the plan, as he did last year.

City Councilman Peter Koo (D-Flushing) promised to “personally use all the powers of my office” to defeat de Blasio’s anti-SHSAT agenda.

Grodenchik, another staunch defender of the SHSAT, told the crowd that he’d recently spoken with the School Construction Authority about possibly building more of the specialized institutions.

The councilman, who is a member of the Education Committee, pointed to how long students in eastern Queens have to commute if they go to Stuyvesant or other “elite eight” schools. In terms of a location, he has argued for one to be built at York College’s campus in Jamaica, which already has one of the specialized institutions, the Queens High School for the Sciences.

Representatives of state Sen. John Liu (D-Bayside) and Assemblyman Ron Kim (D-Flushing) also spoke out against City Hall’s plan to eliminate the SHSAT at last Thursday’s meeting. And staffers for Rep. Grace Meng (D-Flushing) and Assemblymembers Nily Rozic (D-Fresh Meadows) and David Weprin (D-Fresh Meadows), who also are against eliminating the test, were on hand, too.

Last year, CEC 26 passed a resolution opposing the proposal to get rid of the SHSAT.

Latinos and Blacks do not apply to specialized schools in sufficient numbers and that inconvenient truth continues to be suppressed.