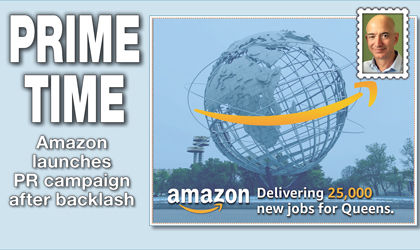 “Happy New Year from your future neighbors at Amazon.”

That’s the message in one of two fliers being sent to residents in Queens as the company tries to win over residents in its controversial move to the borough.

“The announcement of our new headquarters in Long Island City was the beginning of what we hope will be a long and mutually beneficial partnership between New Yorkers and Amazon,” the mailer says.

The positive aspects of the move are touted in both fliers, including the creation of 25,000 new jobs over 10 years and career training for residents.

The first flier says Amazon will be a “partner” with the community.

“As we move forward, we pledge to be your partner, and to listen, learn, and work together. As Long Island City thrives, so will our employees, customers, and our partnership with New York.”

According to the mailer, in Long Island City the Jeff Bezos-owned company will donate real estate for a new public school for 600 students as well as extend Amazon Future Engineer, a childhood-to-career program, to the city to “inspire, educate, and empower underrepresented minority youth to build careers in science, technology, engineering, math, and computer science.”

Helping small businesses thrive is another positive point, as more than half of the items sold “in the Amazon store” are from small and medium-sized businesses and Amazon Web Services helps hundreds of thousands of startups launch.

“We want to make sure New Yorkers know the details of our investment and how it benefits them,” an Amazon spokesperson said. “Our new headquarters will directly create 25,000 new jobs and tens of thousands of indirect jobs in construction, food service, human resources and retail. It will generate more than $27 billion in new tax revenue that otherwise wouldn’t exist and can be used to help improve subways and buses, build more affordable housing, improve schools, and more.”

The flier even gives a site for people to provide their thoughts to the City Council: council.nyc.gov/Amazon-Hearings/.

“The opposition to Amazon is getting stronger,” said Councilman Jimmy Van Bramer (D-Sunnyside) in a statement. “The only reason Amazon is spending money on hiring PR consultants and sending out mailers in Queens is because our voices are being heard. The more New Yorkers learn about Amazon’s long history of exploiting workers and the details of this $3 billion giveaway, the more they oppose this bad deal.”

The Amazon spokesperson said the company would be sending another flier to Queens residents in the next few days. It arrived in mailboxes Tuesday. “This represents their effort to be a good neighbor and engage with the local community to make sure that their new headquarters is a win for all,” the spokesperson said.

While the first flier shows part of the Amazon logo beneath a stylized rendering of the Ed Koch Queensboro Bridge, the second projects the logo across the Unisphere in Flushing Meadows Corona Park.

The flier also encourages people to call state Sen. Michael Gianaris (D-Astoria) or other state lawmakers to tell them to support the project.

Gianaris has been a critic of Amazon’s move to Queens.

"It's ironic that Amazon wants billions of our taxpayer dollars and is spending so much to convince the people of western Queens that it is entitled to those dollars," Gianaris said in a statement. "People will not be fooled by slick advertising — they will continue to be against the Amazon deal and so will I."

Critics of the company’s move to Long Island City have pointed to the $3 billion in tax breaks as well as concerns about the impact on housing prices and if there is enough transportation to handle all the new commuters.

Update: This article has been updated to include a statement from Sen. Gianaris.