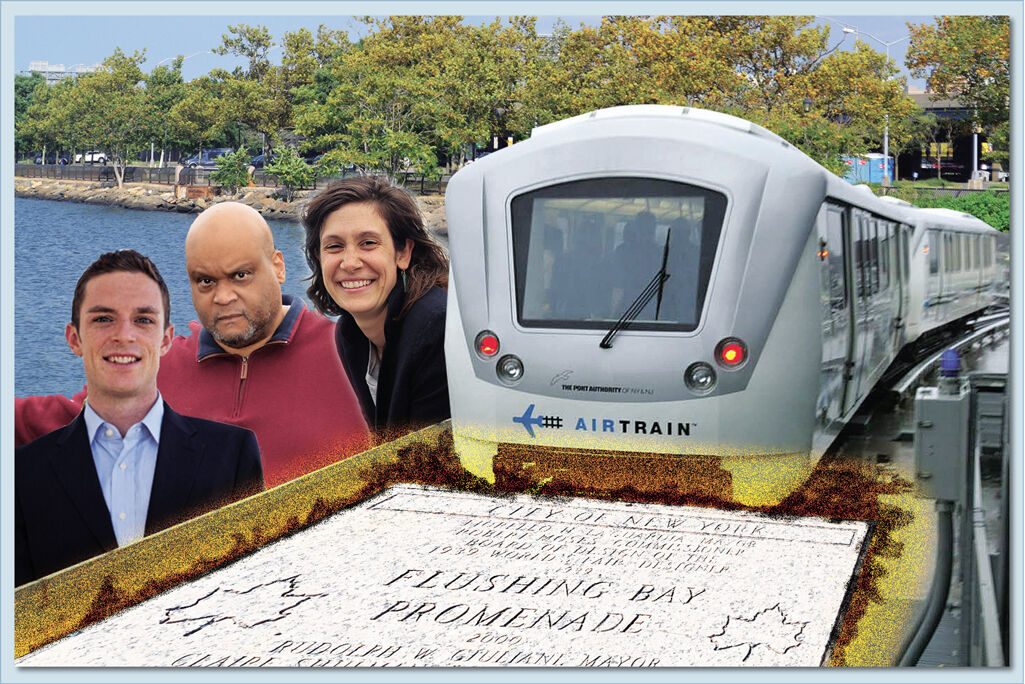 A lawsuit was filed Monday to stop the planned LaGuardia AirTrain. The plaintiffs are the environmental group Riverkeeper, where Mike Dulong, left, is senior

attorney; the Ditmars Boulevard Block Association, led by Frank Taylor; and the Guardians of Flushing Bay, where Rebecca Pryor is executive director. The

line would run along the Malcolm X. Promenade, rear, long known as the Flushing Bay Promenade, a route the activists oppose. 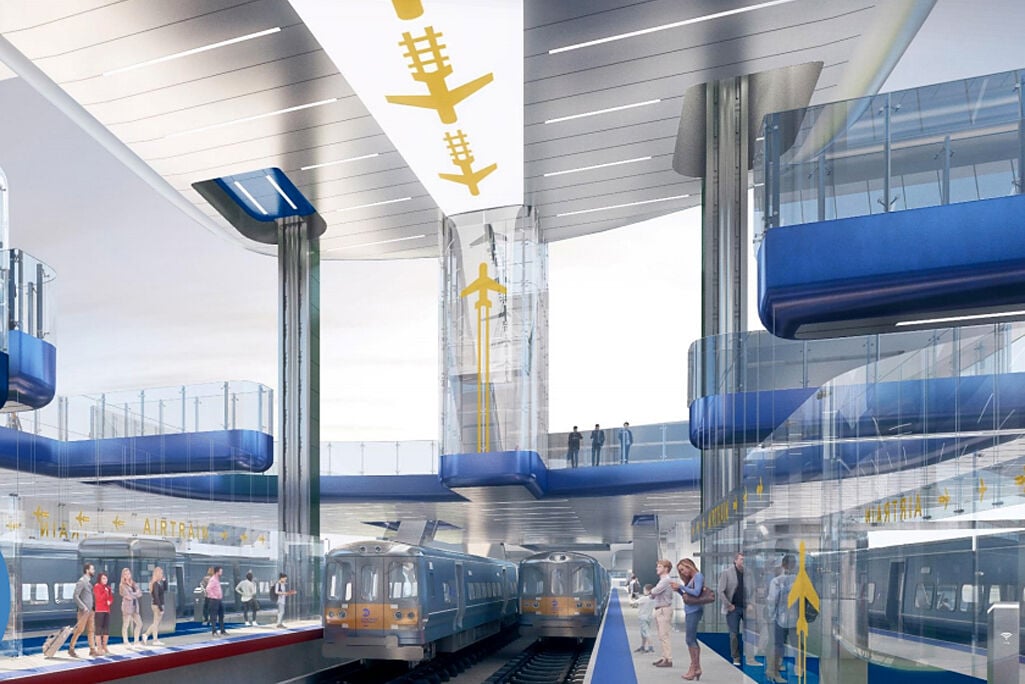 The ongoing fight over the LaGuardia AirTrain is now in federal court.

A lawsuit was filed Monday to stop the planned LaGuardia AirTrain. The plaintiffs are the environmental group Riverkeeper, where Mike Dulong, left, is senior

attorney; the Ditmars Boulevard Block Association, led by Frank Taylor; and the Guardians of Flushing Bay, where Rebecca Pryor is executive director. The

line would run along the Malcolm X. Promenade, rear, long known as the Flushing Bay Promenade, a route the activists oppose.

The ongoing fight over the LaGuardia AirTrain is now in federal court.

Opponents of the proposed LaGuardia AirTrain have filed suit in federal court to block the proposed $2 billion rail link between LaGuardia and the No. 7 train stop at Mets-Willets Point.

The six-page petition was filed Monday with the U.S. Court of Appeals for the Second Circuit by the Pace Environmental Litigation Clinic on behalf of Riverkeeper, the Guardians of Flushing Bay and the Ditmars Boulevard Block Association. Defendants are the Federal Aviation Administration and its administrator, Stephen Dickson; and the Port Authority of New York and New Jersey.

The PA is proposing the rail loop to speed up travel time between LaGuardia and Manhattan. A new station would be built adjacent to Mets-Willets Point and near the Long Island Rail Road stop outside the Billie Jean King National Tennis Center.

The elevated tracks would run alongside the Malcolm X Promenade, a linear park that stretches along Flushing Bay.

Opponents say it would cause irreparable environmental harm to the park and the neighborhood, despite the PA’s commitment of nearly $60 million for park renovations.

Some critics point out it would require Manhattan travelers to the airport to head east to the AirTrain station before doubling back.

The suit alleges that the PA and FAA did not seriously consider alternatives such as extending the N/W subway line from its existing terminus in Astoria and dedicated bus service. It claims the PA is illegally taking parkland as there are feasible alternatives.

The PA has pointed out, however, that more than 80 percent of the comments received during the public outreach and public hearing supported the project.

The Federal Aviation Administration approved the environmental plan in July. But green groups disagree with the FAA’s rationale, particularly when considering options.

“People have a right to enjoy the waterfront,” said Mike Dulong, senior attorney for Riverkeeper, in a statement on the group’s website.

“The laws that were violated are there to ensure that communities and the environment are not harmed by decisions without a careful consideration of alternatives, and, if none are found, mitigation of unavoidable negative impacts,” he said. Dulong called the failure to adhere to the process an injustice that shifts the burdens of this major infrastructure project onto East Elmhurst.

Margaret Flanagan, a board member of Guardians of Flushing Bay and Jackson heights resident, said with any large-scale infrastructure project, especially one costing $2 billion, “they must adequately consider all alternatives.” Rebecca Pryor, also with the Guardians, said those concerns were not addressed in the review process or record of decision; and that she believes the AirTrain finding was a fait accompli from the start.

“If we’re going to spend $2 billion, if we’re going to figure out how to get the best route for all New Yorkers to get to LaGuardiaAirport, then we should have the best enviromental review possible,’ Pryor told the Chronicle. “This is not that.”

Frank Taylor, president of the Ditmars Boulevard Block Association, said the neighborhood of East Elmhurst continues to be victimized by environmental racism, pointing to health concerns and damage to properties from years of construction at LaGuardia.

“For decades this area has been held hostage by the Port Authority of New York & New Jersey and LaGuardia Airport,” Taylor said. “Many studies have been done to show the air quality is poor, and our community has high levels of asthma, COPD, and cancer. Needless to say the noise and the vibrations from construction for the last five years are destroying our houses and leading to other sicknesses of the residents.”

A spokesman for the PA, in an email to the Chronicle on Monday, said all issues have been addressed in the proper manner.

“The Biden Administration’s transportation experts greenlighted the badly-overdue LaGuardia AirTrain after reviewing more than 25,000 pages of studies and other materials, and analyzing more than 40 alternatives,” he said. “We are confident that the panel of federal judges who will now independently review this matter will affirm that the AirTrain is now ready to be built.”

He said the benefits to the community remain unchanged, calling it a green infrastructure project that will give travelers a reliable rail mass transit link to the airport; dramatically reduce greenhouse-gas emissions by getting millions of cars off the road and greatly ease traffic congestion.

He said it will create 3,000 good-paying construction jobs and more than $500 million in opportunities for minority- and women-owned businesses; and provide $50 million of “historic” funding for local parks, all without taking any private property or going through any neighborhood.

A Better Way to LGA, a coalition of community members, economic development groups, labor unions and others, on Monday criticized the lawsuit.

In a statement attributed to Tom Grech of the Queens Chamber of Commerce, Christopher Boylan of the General Contractors Association of New York, Carlo Scissura of the New York Building Congress and Laura Colacurcio of the Association for a Better New York, the group said Queens only benefits from the AirTrain plan.

“This is reflective of the diverse coalition of environmental advocates, business leaders, labor unions, transportation advocates, community members, and civic stakeholders who understand the importance of creating a reliable public transit link to LaGuardia Airport, which is currently the only major airport on the East Coast without rail access,” they said.

This Cuomo Air Train is a DISASTER for the community. PAN it NOW.