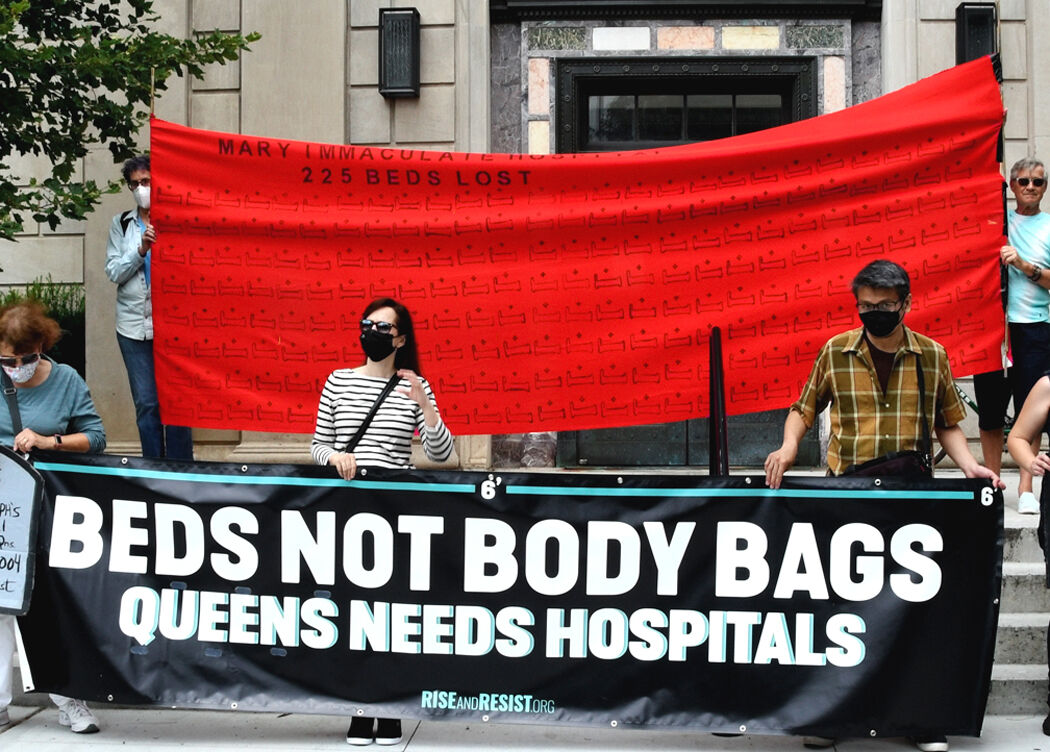 Rise and Resist, an activist group, held a “Beds, not Body Bags” rally at Rufus King Park in Jamaica to highlight the shortage of hospital beds in Queens because of decades of hospital closures. 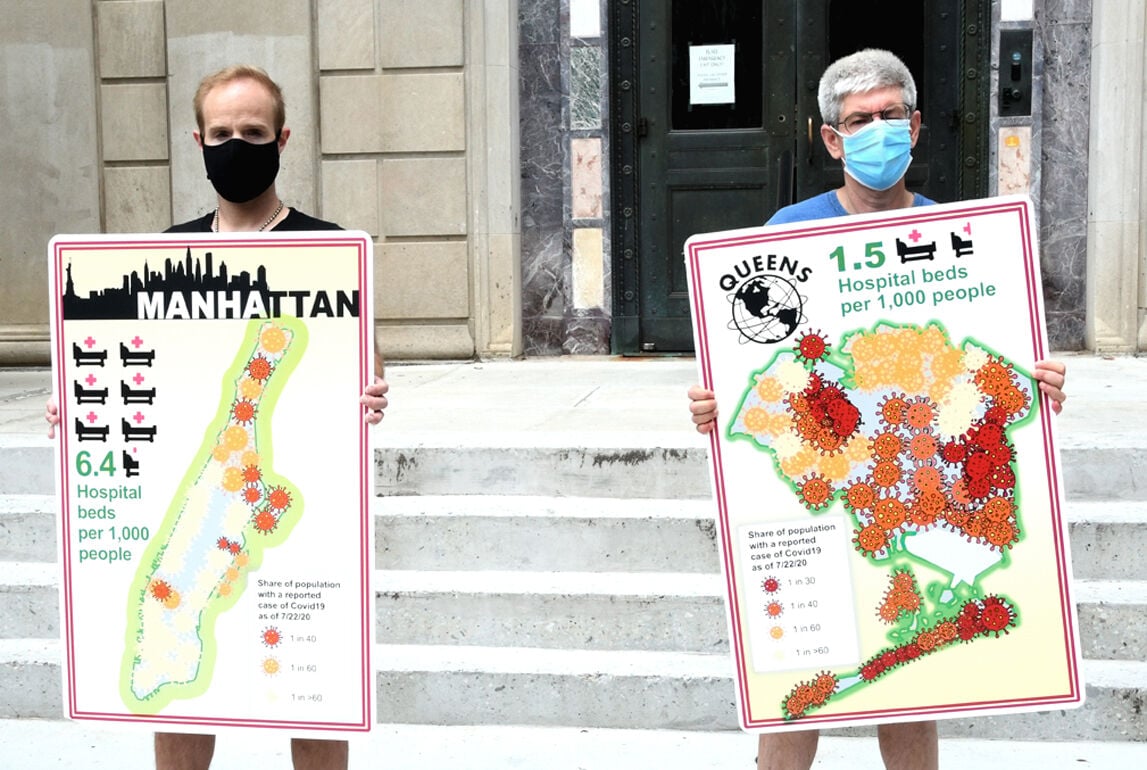 Rise and Resist, an activist group, held a “Beds, not Body Bags” rally at Rufus King Park in Jamaica to highlight the shortage of hospital beds in Queens because of decades of hospital closures.

Rise and Resist, a civil liberties activist group, held a “Beds, Not Body Bags” rally July 10 at the northeast corner of Rufus King Park in Jamaica to raise awareness about the lack of hospital beds in Queens.

The park was no random choice, as it lies across from the site of the former Mary Immaculate Hospital, which is now a luxury apartment complex called Parkhill City at 152-11 89 Ave.

Throughout the hour-long rally, protesters held up signs with statistics about the lack of hospital beds in the World’s Borough compared to Manhattan, which has more accommodations for its patients despite having a smaller population than Queens, the second-most populated borough that if it were its own city would be the fifth largest in the country, according to the U.S. Census.

“We are here today because the closure of Mary Immaculate Hospital and seven other hospitals in Queens over the last two decades has left Queens with the lowest per capita hospital beds of any county in the country,” said Mark Hannay, who advocates for unions and healthcare policy with Rise and Resist. “Interestingly, Manhattan has the highest ratio in the country. Not coincidentally, when Covid hit New York City, Queens became the epicenter of the crisis. The lack of hospital beds has everything to do with this. People died due to systematic inequality. We are calling on the state to take actions that will put healthcare services into high-need areas.”

“The inequity that we are seeing as a result of hospital closures is consistent with the inequities that we see throughout our system — affecting people of color, people with lower incomes, immigrants and single women with children more than anyone else,” said Alexandra Woods, who facilitates meetings with Rise and Resist members.

While Queens comes second to Brooklyn in population throughout New York City, it is the most ethnically diverse county not just in the Empire State or the country, but in the world, according to ny.gov.

It has the largest naturalized immigrant population (1.1 million) in the city, according to the Mayor’s Office of Immigrant Affairs.

There are also 800 languages and dialects spoken within the borough, according to the Endangered Language Alliance, a nonprofit dedicated to documenting diverse languages.

The borough was also the epicenter of the coronavirus pandemic, according to Rise and Resist, because of the closure of eight hospitals — Mary Immaculate, St. John’s Queens Hospital in Elmhurst, Holliswood Hospital, Little Neck Hospital, Parkway Hospital in Forest Hills, Physicians Hospital in Jackson Heights, Peninsula Hospital in Far Rockaway and St. Joseph’s Hospital in Flushing.

“The reason behind the hospital closures was economic,” said Dr. Leon Kirschner, the director of an occupational therapy department and a secretary at Rise and Resist, who is from Jamaica and lives in Jackson Heights. “The state’s Medicaid reimbursement schedule is so low that hospitals can’t survive in the current environment if they depend on Medicaid rather than private insurance or private pay — and consider which hospitals and communities serve populations that use Medicaid. Thus hospitals in high-need areas close.”

Rise and Resist wants elected officials to create innovative legislation to fix the problem or introduce a sliding scale that incentivizes putting beds into high need areas by reimbursing at a higher rate, according to Kirschner.

Gennaro said in response that he is doing all he can to support hospitals.

"During the peak of the COVID-19 pandemic, we witnessed firsthand the folly of [New York] State government's leadership in the early 2000s in mandating the closure of so many hospitals throughout the State, especially in Queens. As a result, Queens has the lowest number of hospital beds per person than any other county in the United States that has a hospital — and that is an atrocity," said Gennaro. "As a New York City Council Member, I am doing everything within my power to support the Borough's public and private hospitals. This year, Borough President Donovan Richards and I partnered to secure more than $5 million for the Queens Hospital Center to ensure that the underserved communities of Queens have access to world-class medical care. The people of Queens deserve more hospitals and more beds, but for now, my job and my vow is to ensure that all our existing hospitals become beacons of medical excellence."

Richards held similar sentiments during a Queens State of the Borough address in March.

“This past year, the pandemic did not show us anything new, but it did reveal how deep inequity runs right here in the greatest city in the world; and unfortunately, even in the most diverse county in the continental United States — Queens,” said Richards.

Comrie declined to make a statement at this time.

While speaking with the Queens Chronicle on July 16, Kirschner was thankful for Richards’ efforts to prevent St. John’s Episcopal in Far Rockaway from closing during the pandemic, for coming to its past rallies and for his efforts with helping other hospitals in the borough.

The Queens Chronicle reached out to the remaining aforementioned elected officials about the lack of hospital beds in the borough, but did not receive a response before the publication of this article.