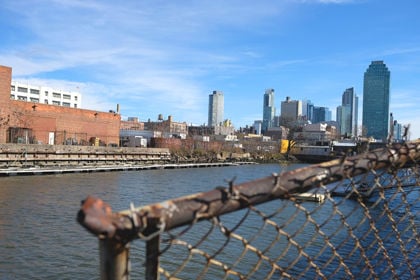 Following Amazon’s dropping of its plan to build a complex on the East River around Anable Basin, several area property owners — though not the biggest — are working together at the city’s behest on a new, comprehensive plan to redevelop the Long Island City site. Strong community engagement is promised. 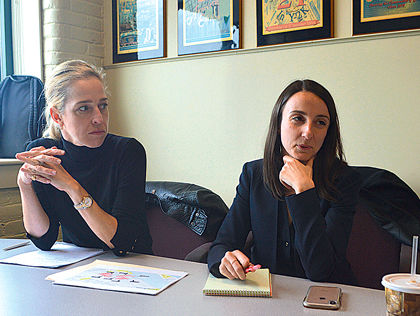 Ashley Cotton of L&L MAG, left, and Eleonora Bershadskaya of TF Cornerstone speak about the nascent proposal to develop a large swathe of the Long Island City waterfront. Their firms and another one that holds land there, Simon Baron Development, are working with city officials on the project.

Following Amazon’s dropping of its plan to build a complex on the East River around Anable Basin, several area property owners — though not the biggest — are working together at the city’s behest on a new, comprehensive plan to redevelop the Long Island City site. Strong community engagement is promised.

Ashley Cotton of L&L MAG, left, and Eleonora Bershadskaya of TF Cornerstone speak about the nascent proposal to develop a large swathe of the Long Island City waterfront. Their firms and another one that holds land there, Simon Baron Development, are working with city officials on the project.

The death of one Anable Basin mega-project led to the birth of another one.

It’s a story that begins a few months after Amazon ditched Long Island City earlier this year. That’s when the City Council and the de Blasio administration approached TF Cornerstone, Simon Baron Development, L&L MAG and Plaxall, four companies that hold land in and around the waterfront site where the online retail behemoth planned to set up its complex. The conversations centered around the idea of taking a unified approach to developing the 28-acre space.

Although no firm plan yet exists for the project, three of the companies have agreed on a conceptual framework: creating a vibrant, 24/7 community on the waterfront, the representatives of TF Cornerstone and L&L MAG told the Chronicle in a sitdown interview last Friday. Both firms are working with Simon Baron Development.

Residential towers have been dominant in the LIC construction boom of recent years. While the new project will have housing, commercial and office space are the key element.

Job creation — including for people who live in and around the development — will also be a focal point.

“Again and again we’ve heard, ‘Enough with the residential. We would love to see a commercial district here,’” L&L MAG Managing Director of Communications and Marketing Ashley Cotton said. “And again because Amazon sort of blessed the area and said, you know, ‘This is a place where a global company would want to have their headquarters,’ we believe strongly that there is an appetite for that.”

Open space including a public waterfront esplanade and a contiguous bike lane are also planned. And the companies involved intend to work together on resiliency planning for the project.

The developers have been working closely with the offices of Council Speaker Corey Johnson (D-Manhattan) and Councilman Jimmy Van Bramer (D-Sunnyside). Once a concrete plan is made, the project — which will require a major rezoning — will enter the Uniform Land Use Review Procedure, a process the consortium intends to complete by the time Mayor de Blasio leaves office. His term ends in 2021.

Plaxall, a family-owned plastics company that has been a part of LIC for decades, owns much of the 28-acre space in question. The firm earlier had been in talks with the other landowners, but Cotton said it has “chosen not to continue.”

“Our message to them is as clear as a bell: We wish they were here,” she said. “We think the framework works much better when we’re talking about all four property owners together. We can’t make their decisions for them.”

Unless Plaxall changes its mind, the land-use application for the project will only include the parcels held by the other companies involved.

James Yolles, a spokesman for Plaxall, on Tuesday told the Chronicle that the company is open to further discussions with the developers and city officials.

“We really appreciated the recent chance to hear from a range of community groups at a public meeting and look forward to more opportunities to hear from our neighbors soon,” Plaxall Managing Director Matt Quigley said in a statement. “Comprehensive planning and input from the community will be integral to a practical, sustainable and successful plan for Anable Basin and the LIC waterfront.”

Opponents of Amazon’s LIC proposal often blasted the e-commerce company for lack of community outreach in Queens — something the city and the developers intend to do plenty of for their Anable Basin proposal.

Residents will be able to share what they think would be best for the different properties in the project’s scope.

“What the city has asked us to do is to reembark on a community engagement process where we solicit community feedback for the types of uses that make sense on those sites,” TF Cornerstone Senior Associate for Acquisitions and Development Eleonora Bershadskaya told the Chronicle in the sitdown interview.

The companies have picked a longtime Long Island City leader to head community engagement and workforce development initiatives for the project.

Former LaGuardia Community College President Gail Mellow is taking on that role for “Your LIC,” the neighborhood outreach process for the consortium’s planning.

The position will have her working with NYCHA tenant associations and other groups to create recommendations for the project’s workforce development component.

Queens residents often say they would like to see affordable housing units constructed in major real estate projects. While the developers say some of the residential units will be reserved for low- and middle-income people, it is too early to say what the percentage would be.

Bike lane advocates may get a win, too.