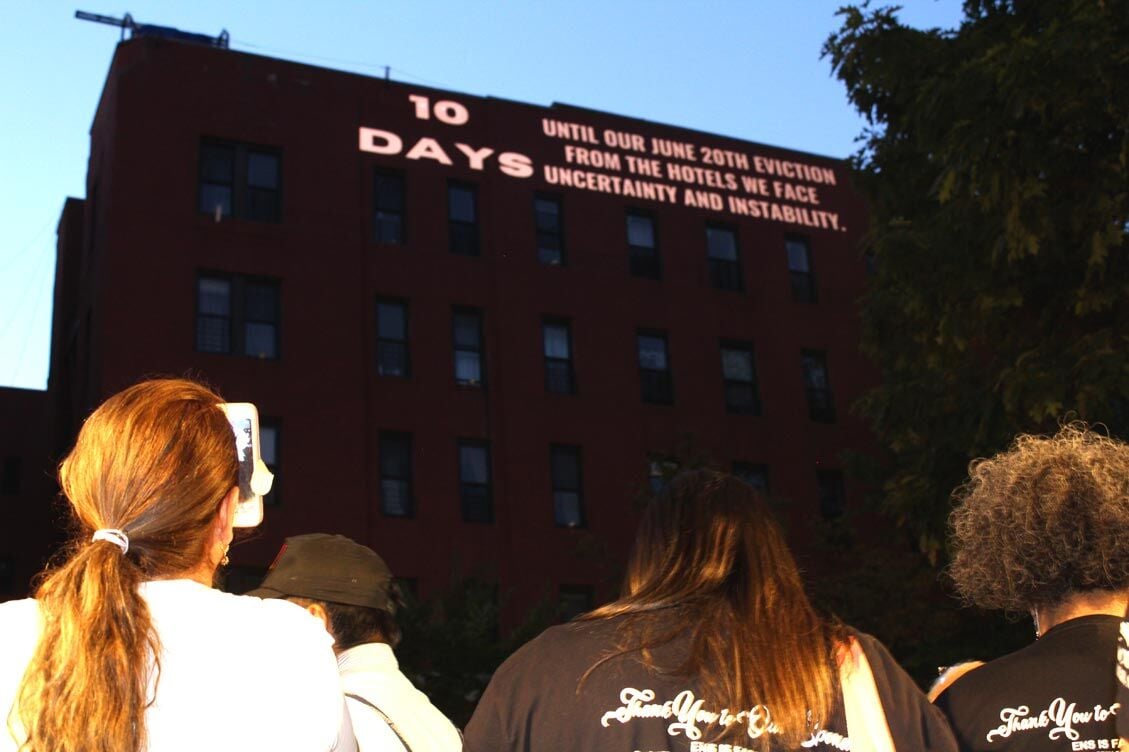 Two and a half months after nearly 500 people in 143 households were displaced by an apartment building blaze in Jackson Heights, many are still asking the city for more assistance in keeping their lives together. They rallied last Thursday, even as officials said they will grant some of what the families are seeking. The demonstration included messages projected onto one of the buildings that was damaged. 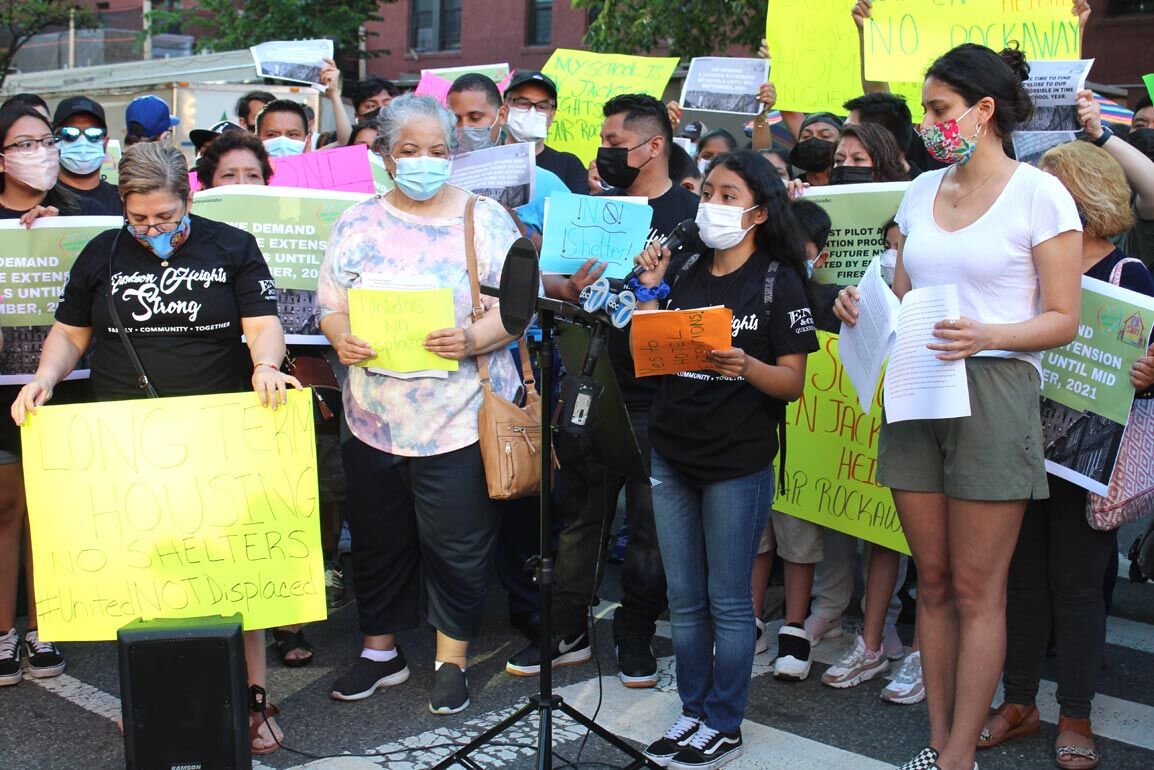 Kimberly Sinchi, a student at Benjamin Cardozo High School, addresses the crowd at a June 10 rally organized by the 89th Street Tenants Unidos Association to advocate for extended hotel stays and more housing options following the fire at 89-07 and 89-11 34 Ave. in Jackson Heights.

A banner calling for homes, not spaces in shelters across the street from 89-11 34 Ave.; and a boarded up window and vacate notice on the building.

Two and a half months after nearly 500 people in 143 households were displaced by an apartment building blaze in Jackson Heights, many are still asking the city for more assistance in keeping their lives together. They rallied last Thursday, even as officials said they will grant some of what the families are seeking. The demonstration included messages projected onto one of the buildings that was damaged.

Kimberly Sinchi, a student at Benjamin Cardozo High School, addresses the crowd at a June 10 rally organized by the 89th Street Tenants Unidos Association to advocate for extended hotel stays and more housing options following the fire at 89-07 and 89-11 34 Ave. in Jackson Heights.

A banner calling for homes, not spaces in shelters across the street from 89-11 34 Ave.; and a boarded up window and vacate notice on the building.

Jackson Heights residents have pleaded for extended hotel stays and increased housing options after an eight-alarm fire condemned their 34th Avenue apartment buildings on April 6. Their requests may finally be granted — but with provisions.

“We will extend hotel stays for those who complete their registrations and housing applications before June 20th, and who, going forward, are receptive to any affordable housing referrals we make,” a spokesperson for the Department of Housing Preservation and Development said on Monday via email.

“HPD has been reaching out to families to encourage them to register by calling, leaving messages and delivering notices under hotel room doors,” said the spokesperson.

Extensions were granted by the city twice, but residents were facing a June 20 deadline, Father’s Day, to leave hotels and find housing or enter a shelter as the two buildings, 89-07 and 89-11 34 Ave., remain shuttered. The new deadline has not been announced yet.

The HPD said it is offering units in Jackson Heights and referring families to homes in both Jamaica and the Rockaways. It has no family shelters in Queens.

There are still at least 30 families who have not come forward to register and fill out the applications, according to the agency.

“Not many people trusted the system to begin with,” said Andrew Sokolof Diaz, co-president of the 89th Street Tenants Unidos Association, which organized a rally for the tenants last Thursday. Diaz is staying in a JFK-area hotel with his wife and their 4-month-old son. “We don’t want to stay in hotels because that’s no way to live, there’s no kitchen, but we rather stay in hotels than go to shelters out of our borough because we love our community,” he said.

He says residents have had to “jump through hoops” trying to get acceptable documentation for the HPD. The intake process is tedious, he says, and there are language barriers for residents who speak Spanish, Bengali, Tagalog and other languages. Sixty-five percent of the population in Jackson Heights identifies as Hispanic and 19 percent as Asian, according to the U.S. Census Bureau.

“We’re still being pressured to go into shelters nowhere near our community,” said Sergio Melo, a resident of 89-11 34 Ave. “We’re still being asked to provide documentation that is stuck in our buildings,” he said.

The tenants association rally last Thursday featured testimonies from residents, who were joined by over 100 supporters as well as state Sen. Jessica Ramos (D-Jackson Heights) and representatives from the offices of Borough President Donovan Richards and Assemblywoman Jessica Gonzáles-Rojas (D-East Elmhurst).

“We demand a dignified treatment from HPD and city agencies in response to one of the worst tragedies in recent history of Jackson Heights,” said Angie Espino, a 24-year-old resident who also volunteers for the tenants association and emceed the event, also providing translations. She and Sokolof Diaz contributed to creating a master list of all the residents in the buildings.

“We want to know who lived there and who needs help,” said Diaz. “We’ve come to find out a lot of information and people are really vulnerable.”

The fire displaced 143 households and almost 500 people, according to the Red Cross. It offered temporary housing for “a few nights” after the fire as well as emergency financial assistance, meals and mental health support while addressing health concerns, said Michael du Vulpillieres, a communications officer for the Red Cross in Greater New York, in an email.

At the rally, residents spoke of families being split up and staying in different locations, traveling far for school and work and the pressure to leave the neighborhood many called home for decades. Many families are staying at hotels around Queens and Brooklyn, including The Tillary Hotel in Downtown Brooklyn.

Some residents also worry that the buildings were not properly secured and that belongings were stolen. Security is present but Jerika Castillo says she was a victim of a burglary. “Everything I worked so hard for during the whole crisis was taken away from me,” she said. “I am tired, I need support and I need my leaders to get us a proper home and a proper timeframe.” Sokolof Diaz believes there could have been at least a dozen burglaries.

Ingrid Perez is 18 and has lived in 89-07 since she was 4. She is expecting her first child in a month and planned on raising the baby in Jackson Heights. “My family has been my support system throughout my pregnancy yet HPD won’t allow my brother to enter a shelter with us because he doesn’t have an ID,” which was left behind in the fire, said Perez. “We need more time to find housing where we can be together.”

Martha Maldonado lived in her apartment for over 30 years and has worked at the Trade Fair Supermarket in Jackson Heights since 2005. “A journey that previously took me seven minutes now takes me an hour,” she said.

Rosa Arias also has to commute far now, from Brooklyn to Queens, for her job at the LaGuardia Café in East Elmhurst and also as a home care attendant. She works late nights and has to leave for Queens by 5 a.m. “This is a lot for me,” said Arias, who got Covid in February.

Before the fire, her sister lived a few blocks south of her and their dad lived a few blocks north. Arias would check on him frequently and deliver groceries. “We used to walk together every night,” down 34th Avenue, which is now closed for the Open Streets program, said Rosa’s sister, Joana Arias. Joana now has to take care of her sister’s dog since it can’t stay in the hotel all day, all the while undergoing her chemotherapy treatments. She misses her sister being nearby, she said: “This is a very difficult and saddening situation.”

Rosa paid only $1,000 per month for the rent-stabilized apartment she shared with her husband for the past 25 years, but when they started looking for a rental after the fire, they couldn’t find anything for less than $1,700 and that required three months down. “I don’t have $5,000,” said Rosa.

Kimberly Sinchi is a 16-year-old student at Benjamin Cardozo High School, and she had to take the subway for over an hour from The Tillary to Bayside for the remainder of the school year.

“We need more time to find housing,” said Sinchi, speaking for herself and her parents. “I would love to return to Jackson Heights and I’m asking for the support of New York City Mayor Bill de Blasio and HPD to find us that time by extending our hotel stay,” she said.

Mayor de Blasio said the city would be as “flexible” as possible regarding the hotel accommodations in an interview on WNYC’s “The Brian Lehrer Show” last Friday. “We need everyone to fill out forms for permanent affordable housing. We’re going to get you options, as many as we can,” he said.

“While HPD is targeting Jackson Heights and Queens for housing options to keep households in the neighborhood, Jackson Heights has historically low vacancy rates, making it difficult to accommodate all families in the area,” said the HPD spokesperson in an email.

The building “likely isn’t going to be fully habitable for at least a year,” added the spokesperson, who said the HPD and the Department of Buildings are actively monitoring repairs and will step in if there is a lack of progress.

“The longer they don’t help, the more likely we’re going to find something further away and we’re not coming back,” said Diaz.

“Now some folks will say, well, is it in the exact same neighborhood they were in? No, the honest truth is no, but it is in Queens,” said the mayor on Friday.