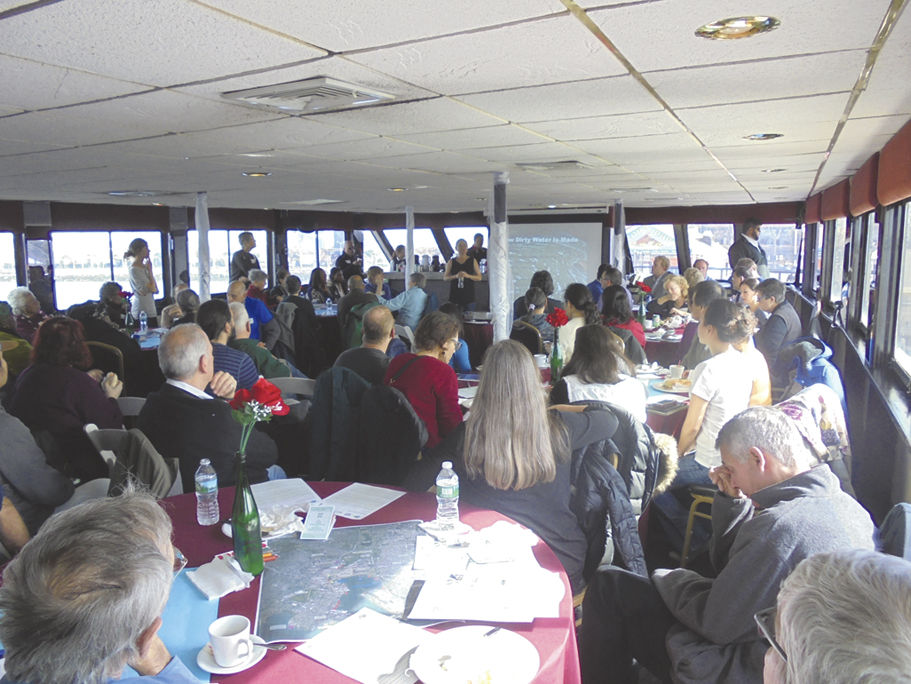 Environmentalists and others concerned about the health of Flushing Bay hold a clean-water community meeting aboard the Skyline Princess at the World’s Fair Marina, where they discussed issues such as pollution and dredging.

Environmental advocates and community stakeholders are working to get city and state agencies to clean Flushing Bay, and met Saturday to discuss strategy.

Environmentalists and others concerned about the health of Flushing Bay hold a clean-water community meeting aboard the Skyline Princess at the World’s Fair Marina, where they discussed issues such as pollution and dredging.

Environmental advocates and community stakeholders are working to get city and state agencies to clean Flushing Bay, and met Saturday to discuss strategy.

Akila Simon is all too familiar with the polluted waters of Flushing Bay.

A coach for the Empire Dragon Boat Team NYC — a racing team made up of breast cancer survivors — Simon spends a good portion of her time on the bay’s murky waters, where raw sewage and untreated stormwater are discharged during heavy rain. She said it’s not uncommon for the women to paddle past feces, condoms and other garbage.

“We had two members on the team who were really disturbed by that,” Simon said, pointing to a picture of a dead rat floating in the water. “And it really started the talk within the group that we have to take some sort of action.”

And so they did, joining with an advocacy group that tests water quality and starting an annual cleanup of the shoreline. The boat team has also taken part in a project to grow oysters in the bay as part of a study to gauge water quality.

But the dragon boat team is not alone, as several other groups have taken up similar efforts, each with the common goal of seeing cleaner water in Flushing Bay and the adjoining Flushing Creek.

The nonprofit group Riverkeeper, for instance, has worked with the city to reduce the amount of sewage overflow discharged into the waterways. And it recently led efforts to remove two derelict barges from the bay, which apparently ran aground last January and have been polluting the water.

On Saturday, the various advocacy groups joined together to host the Flushing Clean Water Community Meeting inside the Skyline Princess, a cruise ship docked at the World’s Fair Marina, not far from Citi Field. They talked about issues facing the waterways and detailed their efforts to help. The advocates also gathered input from community leaders and local residents, seeking not just their concerns, but also ideas for the future.

“We can’t just say the water is bad, the conditions are bad,” Simon said. “We need to band together, have power in numbers and move on to the public meetings where we can make that difference.”

The cleanup of Flushing Bay and Flushing Creek is no small task. Over the years, the waterways have become some of the most polluted waterways in New York City.

A major contributor is the combined sewer overflow that is discharged during heavy rainfall, when the volume of stormwater entering the sewer system exceeds the capacity of nearby treatment plants. Between the bay and the creek, advocates estimate as much as 2.3 billion gallons of combined sewer overflow spews into the water each year.

“The scale of this problem is huge,” said Sean Dixon, an attorney with Riverkeeper. “In some cases, it’s indescribably huge.”

Alexandra Rosa, of the Friends of Flushing Creek, said the creek, which runs through Downtown Flushing and empties into the bay, has become “ground zero” for combined sewer overflow. She echoed concerns raised by some elected officials, including Councilman Peter Koo (D-Flushing), that the pollution could impact the city’s proposal to rezone Flushing West to create more affordable housing and increase waterfront access.

“This [plan] is wonderful, but no one will want to live on an open sewer,” she said.

For its part, the city’s Department of Environmental Protection has been working on plans to help clean up the waterways. In the short term, the agency will begin a project this year to dredge sludge from the bottom of Flushing Bay that has accumulated in recent decades.

“As much as there has been a lot of work done, the DEP realizes that there is still a lot of work to do,” said Mikelle Adgate, a project manager at the DEP. “The issue of combined sewer overflow and stormwater runoff in our separately sewered areas is really sort of the next horizon of water quality challenges that we’re currently in.”

For advocates, Dixon said the next several months will be crucial.

The DEP has already submitted to the state a long-term plan to address combined sewage overflow discharged into Flushing Creek. The plan calls for, among other things, a seasonal disinfection at one of the major outfalls. A long-term plan for Flushing Bay is expected to be unveiled later this spring.

Separately, the city and the state have been working on an agreement that will lock in the next 25 years of infrastructure spending for combined sewage in the city, Dixon said. The plan is expected to be unveiled in the coming weeks, before it will be open to a public comment period.

“We’ve got a huge problem ahead of us,” Dixon said, referring to the amount of combined sewage flowing into the waterways. “It’s up to the community to tell the elected officials, tell city agencies, tell the state agencies that we don’t want that to continue for 25 more years.”