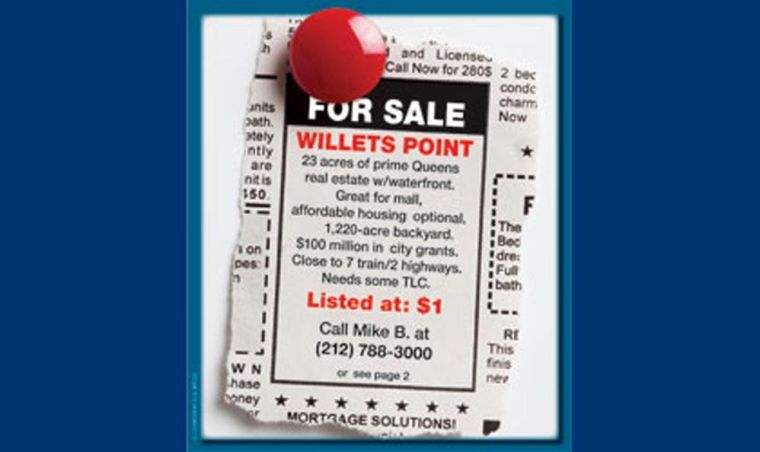 The city is selling 23 acres of public parkland at Willets Point to a development group for $1. 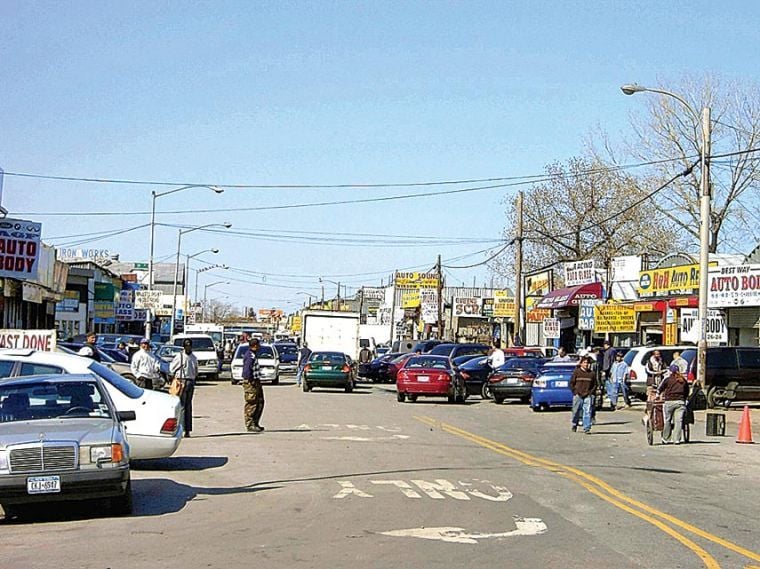 All this, for a dollar: The development group that includes the Mets’ real estate arm recently bought 23 acres of Willets Point for $1, part of a contract that is laced with clauses allowing the developer group to walk away from the deal.

The city is selling 23 acres of public parkland at Willets Point to a development group for $1.

All this, for a dollar: The development group that includes the Mets’ real estate arm recently bought 23 acres of Willets Point for $1, part of a contract that is laced with clauses allowing the developer group to walk away from the deal.

A dollar can still go pretty far these days. You can spend it on a small cup of coffee, a can of soda, a hot dog (outside of Citi Field). Or it could buy you 23 acres of Willets Point.

The Department of City Planning on Monday certified Sterling Equities’ and the Related Companies’ plans for the Phase 1 redevelopment of the Iron Triangle.

The $3 billion project promises to bring a shopping mall, hotel, remediation and affordable housing to the heart of North Queens. But the land won’t cost much for the duo, which has adopted the name The Queens Development Group for the joint venture. And previous promises for community givebacks in the form of affordable housing are not ironclad in the text of a contract dated Aug. 1, 2012 between the developers and the city’s Economic Development Corporation.

In reality, several conditions laced into the 151-page contract allow the Mets’ development wing and Related to walk away from the project if it amounts to bad business. It also contradicts previously stated reasons for the delayed construction of the affordable housing.

The 23-acre parcel set the two companies back one buck. But the project also came with a reduced price tag of more than $100 million through tax savings and grants, according to the contract.

When the plan first faced public review in 2008, some members of the community and elected officials were wary of plans allowing a private developer to remake all 62 acres of Willets Point.

The developer’s contract with the city, however, is laced with clauses that would allow the QDG to back out of affordable housing promises.

At the heart of the matter rest additional exit ramps off the Van Wyck Expressway, which were necessary to mitigate the impact on the area’s infrastructure.

The contract requires the 23 acres be cleaned up first. QDG rolled out the plan on Monday touting the benefits of the remediation of the area.

But after the cleanup, only the ramps’ creation blocks the affordable housing.

Those exits off the highway offer a bedeviling conundrum within the contract, just as they do in real life.

For example, should the city not follow through on building the ramps before Dec. 1, 2025, Sterling and Related will not be penalized for ditching the affordable housing component.

If, however, QDG is behind schedule on the affordable housing, it faces a $35 million fine in 2012 dollars, not matching a rise in inflation.

“It’s probably a higher penalty than you’ll find anywhere in the country for a project of this scale,” said an EDC spokesman.

But the most bizarre part remains the development group’s complete control over when the ramps are built, which is explicitly stated in the contract.

The verbiage surrounding the ramps was disconcerting for opponents of the project.

“People can have that housing being built sometime next year,” said Jerry Antonacci, owner of Crown Container in the Iron Triangle and member of opposition group Willets Point United. “They can start building their ramps then building their housing. Why can’t they do this? I can’t understand. Why are you holding this housing hostage at such a late date?”

The provision stands in direct contradiction to assertions made by the Queens Development Group attorney Jesse Masyr, who said the developer had to wait on the city to complete the ramps.

“There’s really no guarantee that they’re going to build any of the affordable housing part,” said the coalition’s coordinator Ivan Contreras upon hearing about the contractual clause.

An EDC spokesman said the city was committed to building the ramps itself.

Both the city and developer have stated that sizeable fines attached to the affordable housing will deter Sterling and Related from flippantly walking away.

QDG said it will have essentially created the land’s value; walking away would surrender the value of that work to most likely another developer. Good business dictates it sees the project through, QDG concluded.

The city’s EDC has promised the developer $99.9 million in city grants and up to $20 million in inflation-adjusted savings on construction work, according to the contract.

Antonacci took a jab at the city financial aid offered to the developer, in light of the insistence the city build ramps.

“This is city taxpayer money they’re giving away to developers who can afford to pay for it themselves,” he said.

The minimal cost of the 23 acres has also been justified by the sizable cost and effort of the remediation. Well, up to a point.

The deal also sets a $40 million cap on cleanup costs, one-tenth the estimated cost bandied about by then-Deputy Mayor Robert Lieber during City Council hearings in 2008. Should the work cross that threshold, the city and developer have reserved the right to walk away from the rest of the project.

The developer said the $40 million threshold represents a sort of point of no return, when so much has been invested that to walk away without having built anything would be illogical.

The plan’s certification sets the project down the usual chain of participants in the Uniform Land Use Review Procedure: Community Board 7, the borough president, possibly the City Council and the City Planning Commission.

The project calls for the creation of a 1.4-million-square-foot mall, a hotel, community facilities, open space and affordable housing, constituting the largest single private investment in the borough’s history, according to Masyr.

But since most of the project already navigated ULURP five years ago, only zoning approvals for parking east of Citi Field and interim recreation uses at the site will technically be open to discussion.

Until then, Masyr has pressed hard the benefits of the remediation.

“I have I believe for the first time in 50 years a true plan, more important than anything, to stop the current pollution and clean the land,” he said. “It’s been a herculean effort.”

what a joke , he say's he has a plan for the 1st time in 50 years LOL whats the plan ? steel the land from the people and give it to the sucky mets . this hole thing has been a joke from 2008. thank god the owner of willets point have the best lawyers in the city , good job guy's keep up the good fight and stop these thevies from steeling land and tax payers money ,