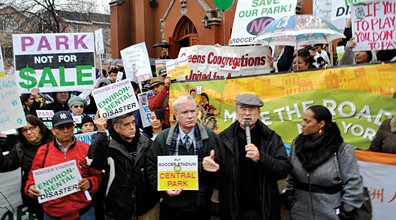 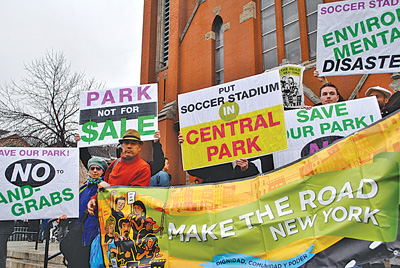 MLS protesters gather in front of Our Lady of Sorrows Church in Corona.

MLS protesters gather in front of Our Lady of Sorrows Church in Corona.

Community groups and residents opposing proposed expansions in Flushing Meadows Corona Park staged a rally and park cleanup on a rainy Sunday afternoon, lambasting three nearby planned projects near as corporate land grabs that would rob the community of “sacred” parkland.

The gathering was organized by the Fairness Coalition of Queens, a collective of community groups that includes Make The Road New York, Asian Americans for Equality and Queens Congregations United for Action, among others.

“We have a tremendous amount of community support from small businesses to civic groups, local soccer leagues and labor,” said spokeswoman Risa Heller. “We will continue to engage with the community and look forward to hearing more from them.”

The USTA did not respond to a request for comment as of this writing.

The protesters met in front of Our Lady of Sorrows Church in Corona, over 100 of them holding up various signs that included “Save our park” and “Put soccer stadium in Central Park.”

The crowd was joined by Councilwoman Julissa Ferreras (D-East Elmhurst) and state Sen. Tony Avella (D-Bayside), both decrying what they characterized as a clandestine deal and giveaway of parkland.

“We cannot make any deals behind closed doors,” Ferreras said, though she fell short of declaring the park an unsuitable site for expansion or new stadiums.

Some took issue with comments MLS Commissioner Don Garber made during an AP interview stating the league and city were “at the finish line” in agreeing on the details surrounding the proposed 13-acre project.

“I cannot be supportive of a project at the finish line when it has not even begun,” Ferreras said, then leading the crowd in a chant of “Our park, our plan, our future” in Spanish.

Avella called all parkland “sacred” and said he opposes the building of any stadium or expansion, while facetiously holding up a sign that called for the stadium’s placement in Central Park.

Speaking of Flushing Meadows, Avella said, “I hate to say it but government looks at it, looks at who uses it and thinks it’s a good idea to use the park for a stadium. It’s cheaper for them to do it this way.”

Ferreras noted the focus on the MLS plan caused many to lose sight of the USTA’s proposed expansion, which would increase its presence in the park to just over a half an acre of parkland beyond its current site.

She also pointed to what she sees as a flaw in the approval process that will allow MLS to ignore projects to be built around the stadium, including the USTA expansion and the Willets Point redevelopment, in its environmental impact statement because they would be built later.

“That’s a very valid concern for me,” she said.

The rally was followed by reports of MLS lobbying efforts topping $1.48 million since March, spending that purportedly went to lobbying firms working with officials at both the state and city level.

Nearly $1 million has gone to HR&A Associates, which boasts a staff filled with former city officials.

MLS downplayed the firm’s work, saying most of its efforts have been focused on real estate and architectural negotiations.

Heller said firms involved in those talks were counted “because they are occasionally in meetings where lobbying takes place, and out of an abundance of caution are registered with the city and state. Regulations do not permit any company from distinguishing lobbying and non lobbying activities on the disclosure forms.”