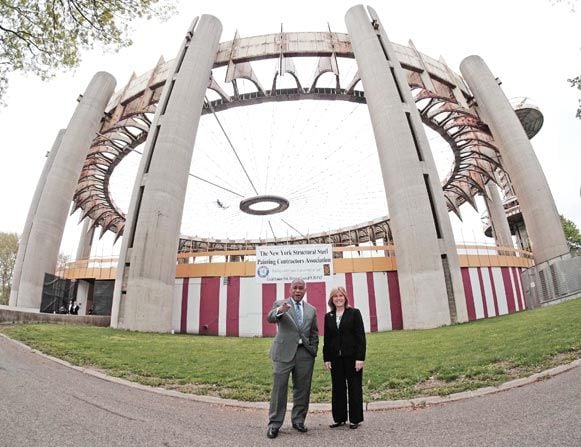 City Parks Commissioner Mitchell Silver and Queens Commissioner Dorothy Lewandowski in front of the New York State Pavillion in Flushing Meadows. The crown of the circular Tent of Tomorrow, behind him, will be getting a fresh coat of yellow paint to match the lower ring. 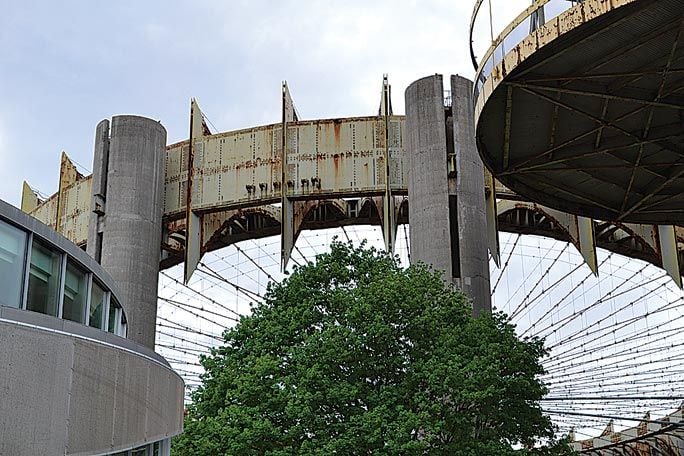 City Parks Commissioner Mitchell Silver and Queens Commissioner Dorothy Lewandowski in front of the New York State Pavillion in Flushing Meadows. The crown of the circular Tent of Tomorrow, behind him, will be getting a fresh coat of yellow paint to match the lower ring.

The New York State Pavilion’s Tent of Tomorrow crown will be getting a $3 million new look with the announcement Wednesday that painters associations will do the work for free.

At a morning press conference outside the pavilion left over from the 1964-65 World’s Fair at Flushing Meadows Park, officials spoke of the rusting, iconic structure and how the paint job will help bring it back to life.

Kieran Ahern, president of the New York Structural Steel Painting Contractors Association, said the idea for the gratis project came from his father, Timmy Ahern, and has been in the works for four years.

“This is a labor of love for us,” Ahern said.

The project will be conducted by union apprentices, who will begin the work soon. It is supposed to be finished by the fall and will replicate the original color, yellow.

The circular Tent of Tomorrow measures 350 feet by 250 feet and had a 50,000-square-foot roof. It lost its multicolored Plexiglas roof panels years ago, and it and the pavilion’s three Observation Towers have been allowed to deteriorate for almost 50 years.

Borough President Melinda Katz, after taking office last year, determined that revitalizing the pavilion was tops on her list and last year secured $5.8 million in city funds to begin electrical and structural repairs.

Katz said Wednesday the in-kind contribution from the painters would go a long way to seeing that dream come true. “We want people to come back here,” she said. “The theme of the fair was ‘Peace Through Understanding,’ and with 138 languages spoken here, we live the World’s Fair every day in Queens.”

Katz also thanked a volunteer group, The Pavilion Paint Project, which for the last several years has been keeping the exterior walls of the Tent of Tomorrow painted.

John Piro, one of the group’s founders, told the Chronicle that he was thrilled about the $3 million project, even though it will likely keep the volunteers away from the pavilion until the work is completed. “Afterwards, we may have to repaint the lower area to match the new paint,” he said.

The apprentices will not sandblast the rusted crown but rather will scrape and paint.

Parks Commissioner Mitchell Silver, who said he remembers visiting the New York State Pavilion as a 4-year-old with his family, called the site “an iconic symbol of Queens” seen from many major roadways. “Until now, it has not received the treatment it deserves,” he added. “It is beautiful and will become a source of pride when the painting is completed.”

Joe Ramaglia, business manager for the International Union of Painting and Allied Trades Local 806, said his group “is very excited” about undertaking the project, adding, “It’s been an eyesore for years.”

Following the presentation, Timmy Ahern told the Chronicle that he helped paint one of the fair’s other pavilions before the fair opened in 1964 and now drives by the fairgrounds all the time. “I couldn’t stand to see the pavilion rotting away,” he said. “When my son said his group was looking for a project to do for free, I suggested painting the New York State Pavilion.”