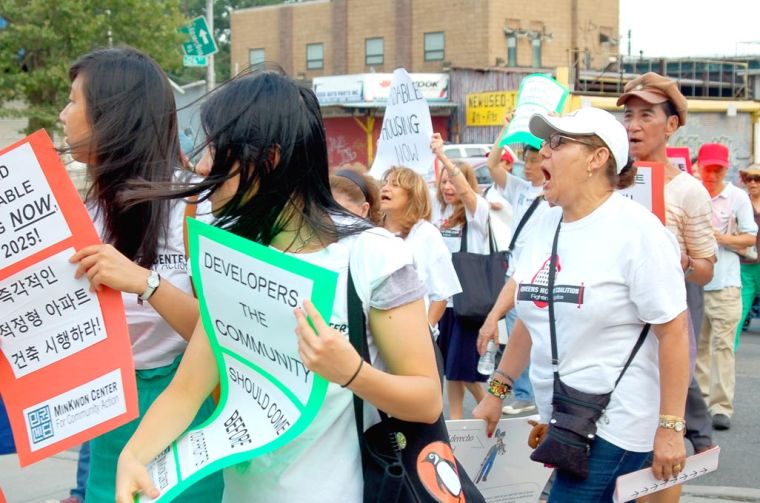 Protesters march to Willets Point down 126th Street for affordable housing and relocation for the businesses who call the future building site home.Photo by josey bartlett 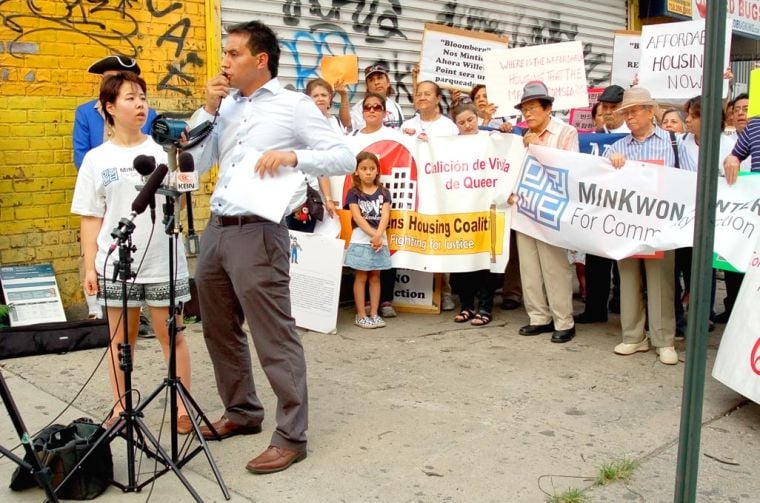 Protesters march to Willets Point down 126th Street for affordable housing and relocation for the businesses who call the future building site home.Photo by josey bartlett

Ralliers walking down 126th Street Monday night want relocation for the many auto body shops that call Willets Point home and affordable housing in the complex planned to replace them.

A contract signed between the city’s Economic Development Corporation and the Queens Development Group puts a proposed 1,920 units of affordable housing last on its to-do list.

Top of the queue would be a 1.4-million-square-foot mall, market-priced housing, shops and ramps off the Van Wyck Expressway.

Furthermore the contract takes the developer off the hook from building 875 units of affordable housing slated for the first, 23-acre phase of the redevelopment if the city doesn’t build the ramps by 2025 or if the developer pays a $35 million fine.

Activists with the Queens Housing Coalition, a conglomerate of many tenant organizations that led Tuesday’s rally and has pushed for affordable housing for years, say the developers have reneged on their promises.

The original deal, brokered by then-Councilman Hiram Monserrate, was a one-shot redevelopment of all 62 acres of Willets Point, which included nearly 2,000 units of affordable housing.

“It’s something that’s needed,” said Woodside on the Move Executive Director Adrian Bordoni, who marched with about 35 individuals. “In Long Island City and Astoria affordable housing is always a part of the discussion. We are thinking the same thing can happen here.”

The group held many colorful signs and chanted — “What do we want?” echoed by “Affordable housing” — as they made their way from the No. 7 Mets-Willets Point stop to the future construction site.

The day after the rally Borough President Helen Marshall approved the mall project, which if approved by the City Planning Commission and Council could be built on the parking lot south of Citi Field. As with Community Board 7, which also OK’d the development, Marshall asked for local hiring benchmarks and more input as the project plods forward.

The other parts of the plan were approved in 2008 and do not have to go back to the City Council, a detail many politicians and activists have decried.

Young Sook Na has lived in Flushing for 15 years and sees more and more people packing into apartments while rent continues to rise.

“Building a mall gets me really mad,” Na said. “We need more affordable housing. They can’t suddenly change that.”

“It was promised,” Woodside resident Ana Rivera said. “We are still hoping they remember the people.”

The city for years has been threatening to move them for the project, but many owners say no one has told them about a concrete plan for where they would go.

Jamie Satti, owner of Discount Mufflers for 10 years, watched the rally from his storefront.

“They want housing, but where will we go?” Satti said.

An employee from the Department of Housing Preservation and Development told Satti on the phone the day before he had one month to move.

“This is serious,” he said.

“We don’t have support,” Satti said. “There’s no one in front of us and no one behind us.”

While driving into work today I heard the news about small business owners being evicted from their long-standing businesses in the Willets Point area, only to be replaced with "affordable housing." As we are well aware, "affordable housing" is somewhat of an acronym for low income dwellings. We are always told by our representatives that continued development will bring more business to the area, keep our taxes from going up, increase our property values, all of which NEVER happen. In fact, our property taxes increase because after this low income housing is completed and families move in, not only are we told that now we have a need for more schools, more roadways, more hospital services, more, more, more.....thereby necessitating an increase in property taxes. And now a mall? Isn't the area congested enough? There are more malls than we could ever need in New York and Long Island, with a two-fold problem. The economy cannot support more retail stores and you continue to put small business owners out of business. Which brings me to the salvage businesses that have been at Willets Point for generations. It is my understanding that there has been a legal battle going on for years regarding removal of these businesses in favor of "affordable housing" and a mall, I even heard the possibility of a hotel. When we, the citizens, have no redress from an onerous judicial system, tell me what can we do. When no matter what you try to accomplish through our judicial system is for naught, tell me how will anyone survive with a judicial system run a muck. These small business owners were evicted and where were they relocated to? Is this a case of eminent domain? Were they compensated for their losses? There comes a time when we have to realize that over-development is harmful and not very cost effective. But then again, what would the politicians know? They are the ones who become rich from these sweet deals they give the developers in exchange for a lucrative kickback. Pure and simple - that's all it is.