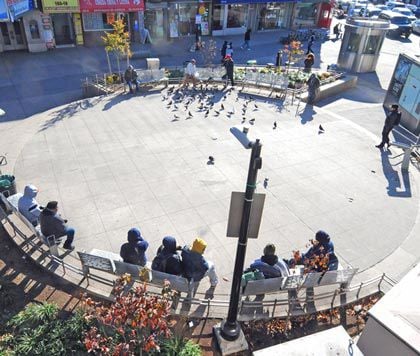 The state of Corona Plaza was an issue at Community Board 4 on Tuesday night, as a Queens Museum offi cial and area activist expressed concern over the people congregating there and Councilman Francisco Moya agreed that the site “is a problem.”

Councilman Francisco Moya, left, spoke to Community Board 4 about Corona Plaza. Crystal Wolfe, founder of Catering for the Homeless, also addressed the board.

The state of Corona Plaza was an issue at Community Board 4 on Tuesday night, as a Queens Museum offi cial and area activist expressed concern over the people congregating there and Councilman Francisco Moya agreed that the site “is a problem.”

Councilman Francisco Moya, left, spoke to Community Board 4 about Corona Plaza. Crystal Wolfe, founder of Catering for the Homeless, also addressed the board.

Gianina Enriquez is the community organizer for the Queens Museum and also serves as vice president of the Friends of the Corona Library.

Some of her work takes her to the area around Corona Plaza.

“I’m really, really, really worried about what is going on in our Corona Plaza,” she said at Tuesday’s Community Board 4 meeting. “It’s every time, every time that you walk around, it’s homeless, it’s drunk people are around, and our kids are not safe.”

Councilman Francisco Moya (D-Corona) added his concerns as he addressed the board.

“Corona Plaza is a problem,” he said.

Moya said the police can’t arrest homeless people but perhaps there could be a crackdown on some of the liquor stores and bars that are serving alcohol.

“If they don’t have the ability to go into a place where they can put their $2 and get a big tall boy or one of those mini bottles there, well, that’s gonna really change a lot of the way they’re going to behave,” he said.

Rules signs around the plaza were taken down and hidden under the stairs of the elevated train, according to Moya.

“Part of taking back our community is making sure that we also have the right resources,” he added.

Moya said a five-minute drive over the Horace Harding Expressway takes one to a place where “they don’t have the same problems,” such as overflowing garbage and fliers all over utility poles.

The lawmaker said he’s done some work in the plaza, such as cleanups with the Department of Sanitation and area business owners, including power-washing.

“But I need your help because we promote those events and we want the community to come out,” Moya said. “Then no one comes out and then we get ‘No one’s doing anything.’”

The area was part of a capital program from the city’s Department of Transportation that converted underutilized roadway space into neighborhood amenities. Corona Plaza at 103rd Street is in the shadow of the No. 7 line of Roosevelt Avenue. The project, which cost more than $5.5 million, included new trees and green space seating, a water fountain and a power source to accommodate performances.

Moya said he’s asked the DOT for a list of events held at the plaza because there have been some for-profit events, which he says is not what the area is for. He also said a community center could’ve been built with the money allocated for the project.

“We didn’t need Brazilian tile to be put on that plaza,” he said. “What we need is access for our children, we need access for our seniors. We have a density problem here. We could’ve used money to build affordable housing, expand our libraries, all these other things that I think are bigger priorities than that.”

He added, “We deserve the same resources that more affluent communities are getting than we are.”

Crystal Wolfe, the founder of Catering for the Homeless and author of a book about them, spoke about the issue.

“One of the myths is that they’re all addicts, they’re all mentally ill,” she said. “That’s not the case.” Wolfe added that high rents and domestic violence are causes of the issue and that 70 percent of the city’s homeless population are families and 40 percent are children.

Moya and Jessica Schabowski, from the Mayor’s Office, spoke about the pre-K center scheduled to open in fall 2021 that will focus on STEAM science, technology, engineering, art and math. Announced in October, the 306-seat school in the Hall of Science in Flushing Meadows Corona Park and will have 17 pre-K classrooms. Once the school is constructed the trailers at PS 28, 16 and 7 will be eliminated.