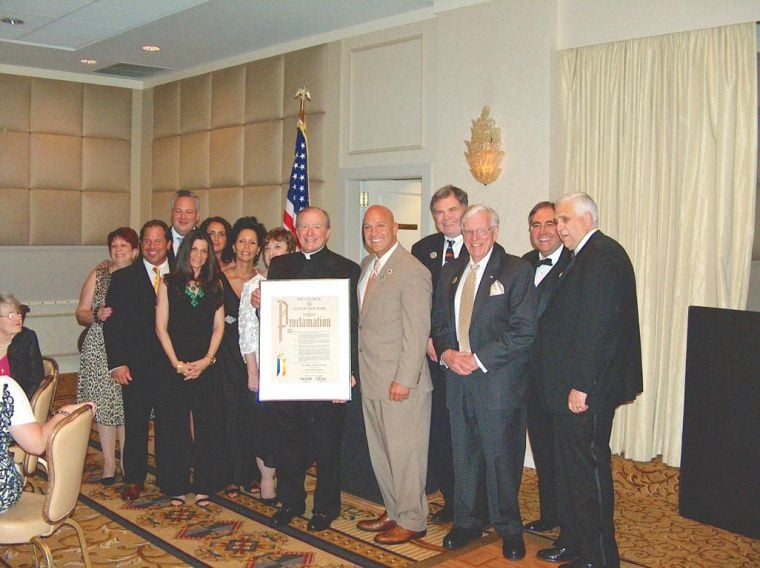 Members of the Saint Andrew Avellino Centennial Committee, above, with the Rev. Joseph Holcomb, center, holding the proclamation given by Councilman Paul Vallone, next to him. In photo below, Bishop Nicholas DiMarzio of the Brooklyn-Queens Diocese is escorted up the aisle to conduct the morning Mass. 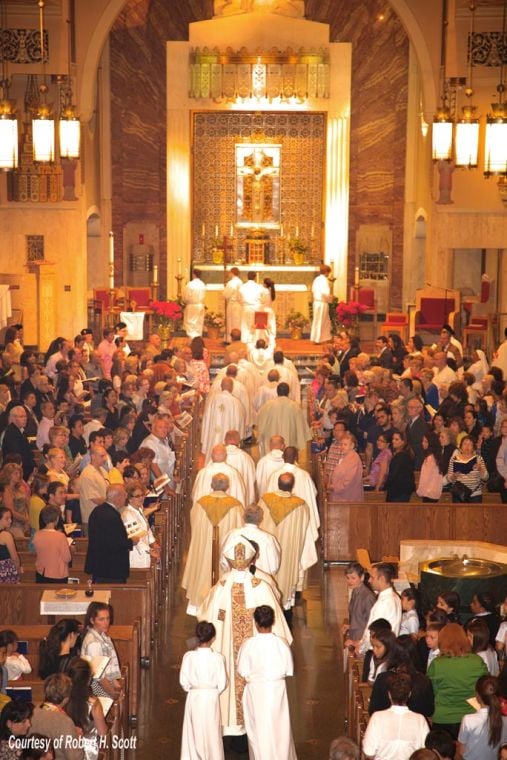 Members of the Saint Andrew Avellino Centennial Committee, above, with the Rev. Joseph Holcomb, center, holding the proclamation given by Councilman Paul Vallone, next to him. In photo below, Bishop Nicholas DiMarzio of the Brooklyn-Queens Diocese is escorted up the aisle to conduct the morning Mass.

A year filled with special events came to a conclusion earlier this month when Bishop Nicholas DiMarzio of the Brooklyn and Queens Catholic Diocese celebrated a 10:30 a.m. Mass at St. Andrew Avellino Church in Flushing in honor of its 100th anniversary.

Among the dozen priests assisting were the Rev. Joseph Holcomb, pastor of the Flushing church, and Msgr. Michael Brennan, parochial vicar.

Representatives of the Centennial Committee and parish ministries filled the front rows of the packed church. Gifts were presented by members of the Lanning family, who have parish roots going back five generations.

Students from the parish school, which was opened in 1925, and children in the St. Andrew’s Prep program were also in attendance. The adult and children’s choirs presented a musical performance which included “The Hymn to Saint Andrew Avellino” played on a classic Casavant organ.

The parish is the only one in the country named after Saint Andrew Avellino, who is the patron saint to protect against strokes and heart attacks. Saint Andrew’s is also home to more priests than any other parish in the United States.

The first parish Mass was said in the Ritz Theatre on Broadway on June 7, 1914. Two years later, Broadway was renamed Northern Boulevard and on June 4 of that year, Bishop Charles McDonnell dedicated a small wooden church at 158th Street and Northern.

The parish school today has over 300 students and an alumni association of over 3,000.

The current church was dedicated by Archbishop Thomas Molloy on Dec. 15, 1940. Known by many as “The Little Cathedral on the Boulevard,” it has been recognized as an outstanding example of American Art Deco architecture.

The observance of the anniversary year opened on June 9, 2013 with a Mass celebrated by Bishop Guy Sansaricq. The year’s activities included: a courtyard barbecue; an Oktoberfest; Bishop Paul Sanchez conducting a Mass on the Feast of St. Andrew Avellino; the parish’s 99th annual Dinner Dance; a multicultural Sunday; a wine and cheese party; a Pilgrimage to Naples and Rome, Italy led by Holcomb; Brooklyn church visitations; a ministry fair; “A Taste of Flushing” reception; a religious convocation; and a Daniel Rodriguez concert in the church.

Some other features of the centennial year were the creation of special logos which were displayed on the church bell tower and distributed on buttons at events. Sanchez blessed Saint Andrew Avellino medals, which were given out at the feast day Mass. A hard-covered commemorative book is being produced that will contain a Papal Blessing, a message from DiMarzio and greetings from dignitaries beginning with the White House.

Parishioners sponsored pages with many including family photos which were taken on the altar. Many organizations, parishes and schools participated in this historic volume as a salute to Saint Andrew’s.