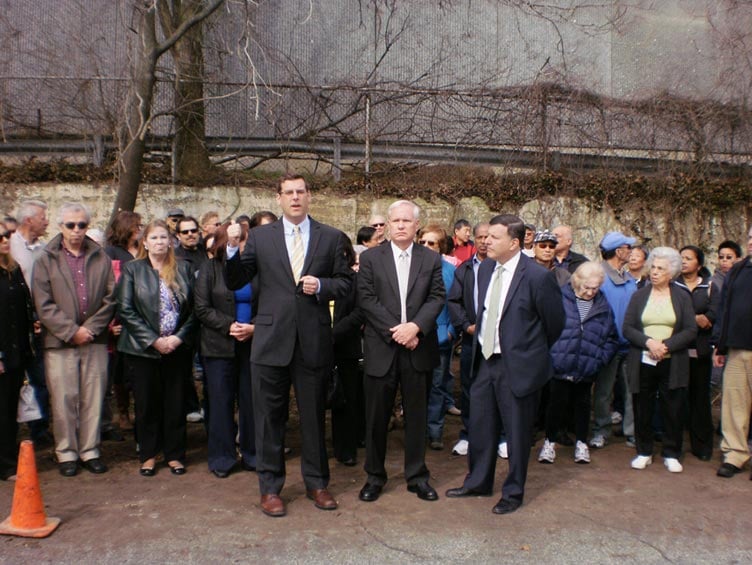 About 100 residents came out Tuesday to protest a watch manufacturer building a 35-foot-tall addition in the rear to the former Leviton factory. With them are Assemblyman Ed Braunstein, center left, state Sen. Tony Avella and City Councilman Mark Weprin. 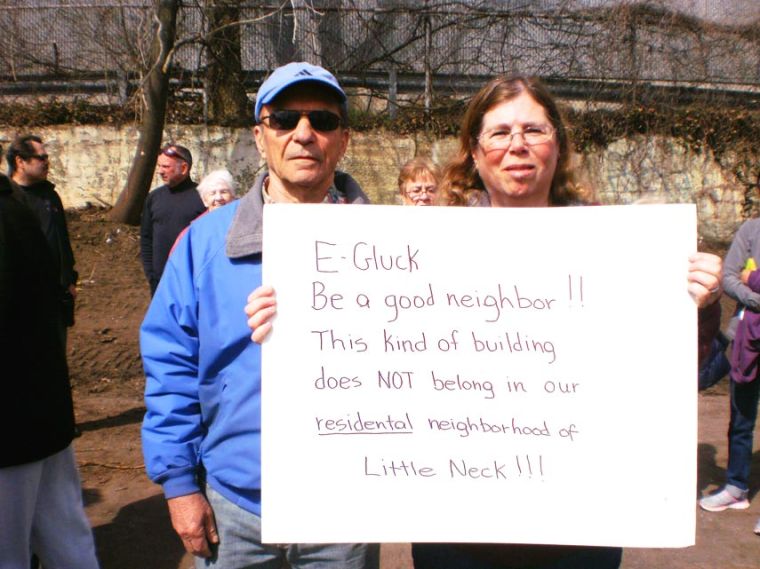 Lisa and Ed, who refused to give their last name, were among protesters Tuesday morning in Little Neck, fighting a 35-foot-high addition to the former Leviton building.

About 100 residents came out Tuesday to protest a watch manufacturer building a 35-foot-tall addition in the rear to the former Leviton factory. With them are Assemblyman Ed Braunstein, center left, state Sen. Tony Avella and City Councilman Mark Weprin.

Lisa and Ed, who refused to give their last name, were among protesters Tuesday morning in Little Neck, fighting a 35-foot-high addition to the former Leviton building.

The wall is up, the people are angry, and, according to state Sen. Tony Avella, “a stop work is going into effect.”

At the center of the controversy is the construction of a new 35-foot-high building, which would sit atop a hill that is already approximately 10 feet above curb level, in the middle of a tree-lined residential neighborhood in Little Neck.

Nearly 100 area residents, along with Avella, Assemblyman Ed Braunstein (D-Bayside) and Councilman Mark Weprin (D-Oakland Gardens) and representatives of Community Board 11, gathered at the corner of 262nd Street and 60th Road on Tuesday morning to protest the construction.

“The moment I saw this, looking at the wall, I felt I was back in the concentration camp,” said a woman who identified herself only as Margret, a Holocaust survivor who lives on the corner across the street from the site. “It is very depressing. I sit at my table and I have to look at this wall.”

The wall, from most accounts, seemed to have been erected overnight.

“When we saw the crane here, I said, ‘What the heck is that?’ The way it looks, it’s an eyesore,” complained Marcia Kops, who lives three blocks away. “I feel sorry for these people,” she added, pointing in the direction of a home, with its newly added second story, directly across the street from the site.

Attending the rally with her husband, Ed, another area resident who gave her name only as Lisa said, “Nobody knew this was going up until it went up.” Referring to the community board, she added, “I didn’t see anything about this on their website.”

As reported in December in the Queens Chronicle, the 6.7-acre site, occupied by the former Leviton building, which had been vacant since the company moved in 2009, was bought by real estate developer Steel Equities and leased to E. Gluck Corp., a manufacturer of watches.

The company “promised to be a good neighbor,” but “misrepresented its plans and did not inform the community that it was constructing a building that is a 35-foot-high eyesore,” Braunstein said. “I am outraged that E. Gluck, which is benefiting from millions of dollars in property and sales tax breaks from the NYC Economic Development Corp., is not respecting the neighboring residents. We are exploring every avenue to remedy the situation.”

E. Gluck did not return calls for a response to the various complaints.

The city granted the manufacturer $12.8 million in tax breaks, a move that Braunstein called “disgraceful” and which has become a thorn in the side of many who attended the rally.

“Our taxes go up, home values go down, and they’re giving them a tax abatement,” complained Marilyn Groudine, who has lived two blocks away from the site for the past 40 years. “If I lived across the street, I would sell my house.”

Braunstein indicated that Gluck had portrayed itself as “a small, quiet watchmaker.” Then, he said, the developer “put the wall up in the middle of the night. The company has been misrepresenting its plans for the site.”

It is a belief that was supported by the other elected officials in attendance.

According to Avella, “The elected officials and members of this community were all repeatedly informed that the new building will conform to the same height as the former Leviton property. But looking at the monstrosity that is nearly finished, it is obvious that the developers lied, hoping that no one will notice before the new building is complete. This huge building should not be permitted across the street from one-family homes.”

Weprin added, “We were happy to have E. Gluck with the understanding they would not disrupt the neighborhood, but this wall is an unacceptable intrusion into the community. Leviton was as quiet a neighbor as we could want. We wanted something that would fit the footprints” of the original building. “It looks like the wall of a prison. It’s a horrible thing for the neighborhood.”

Avella said at the rally that the borough commissioner of the Department of Buildings has committed to getting a stop-work order. He indicated it would go into effect by Thursday.

“E. Gluck made an enemy out of us. We’re going to fight for the community,” the senator said. “We’re not going to let this happen. There are so many loopholes. Hopefully, this time we can use the loopholes to get our way.”

According to David Fischer, spokesman for Braunstein, the only concession the watch company is willing to make is to add foliage around the building.

Queens is on its way to looking like Manhattan.The open air feeling will be gone as developers takeover open space,vacant factories any place where a structure will fit!