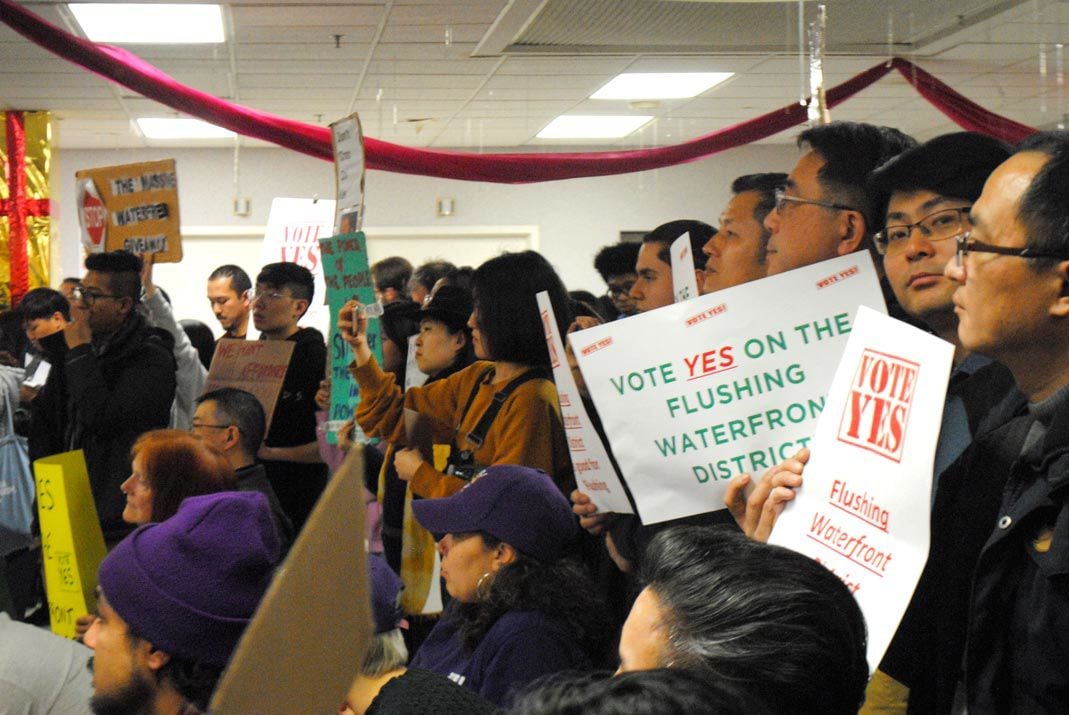 Protesters and supporters of the Special Flushing Waterfront District showed up to Community Board 7’s Monday meeting to persuade members to vote in their respective favor, but the board ultimately voted 30-8 to approve the project. 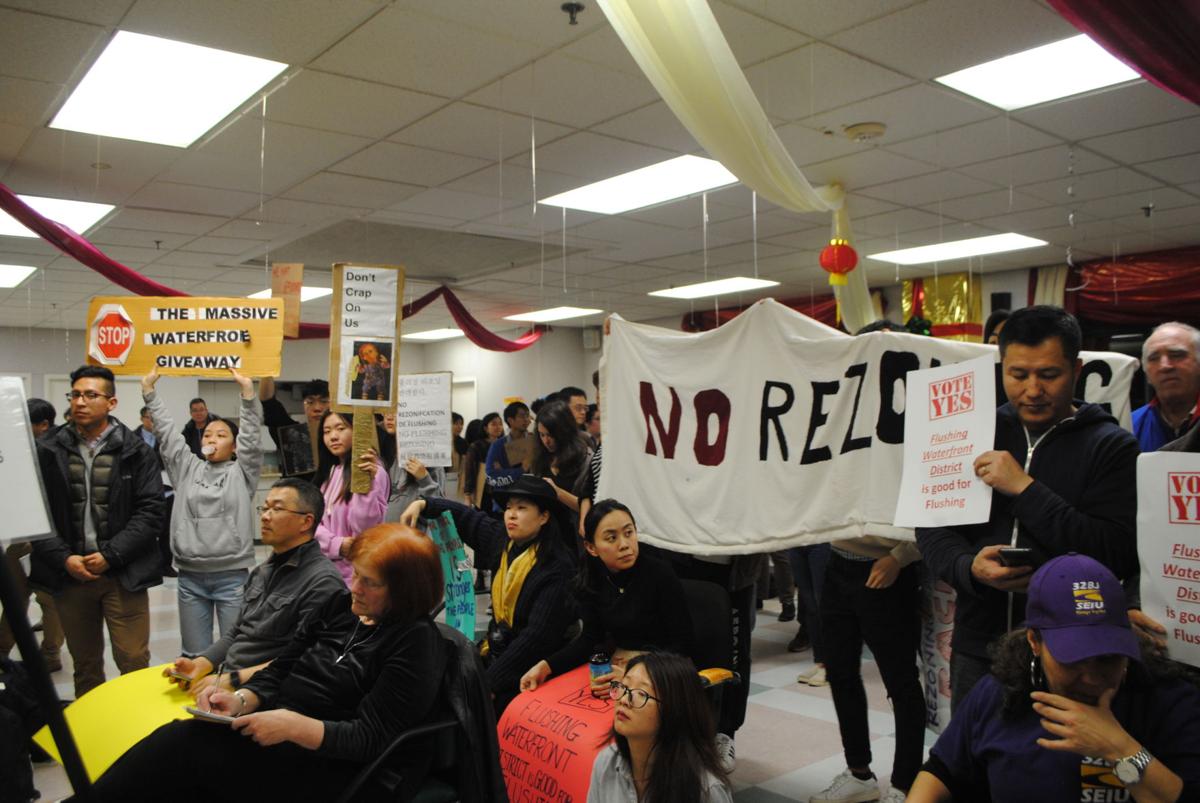 Protesters and supporters of the Special Flushing Waterfront District showed up in attempts to persuade Community Board 7 to vote in their respective favor at its Feb. 10 meeting. 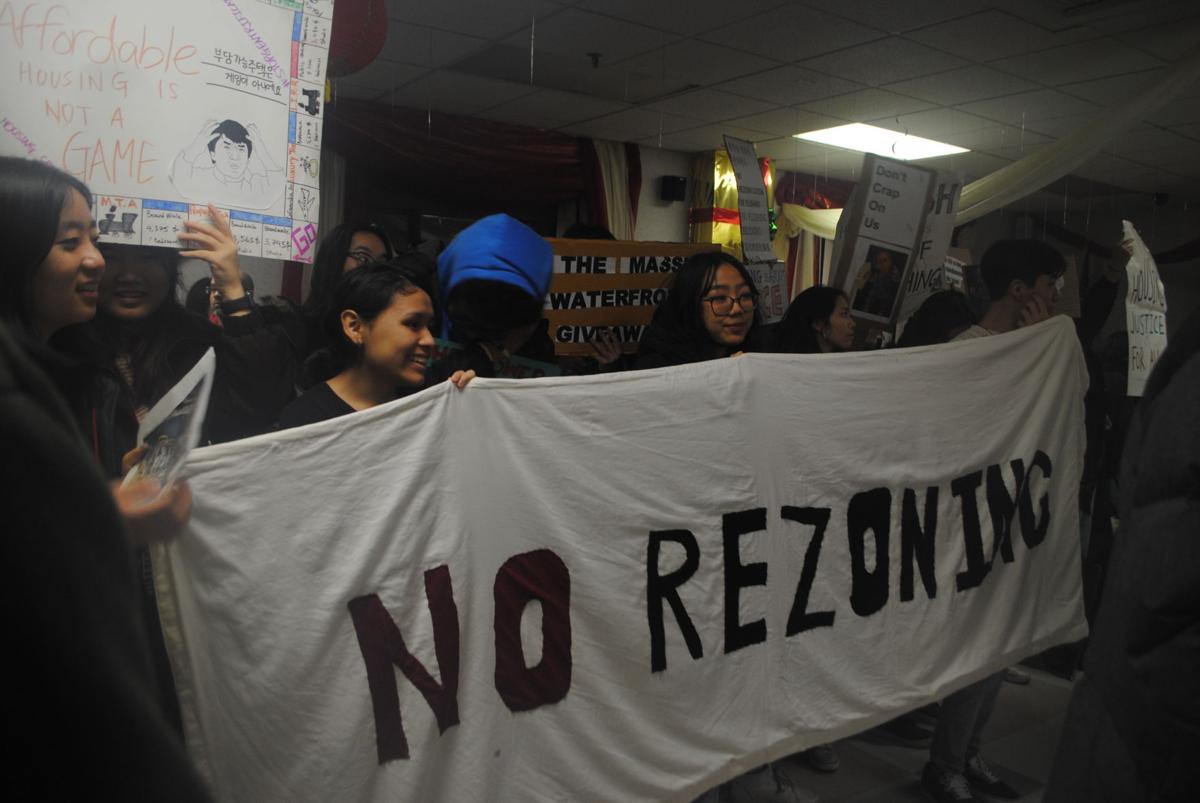 Protesters had appeared at the previous two CB 7 meetings on the proposed waterfront project. 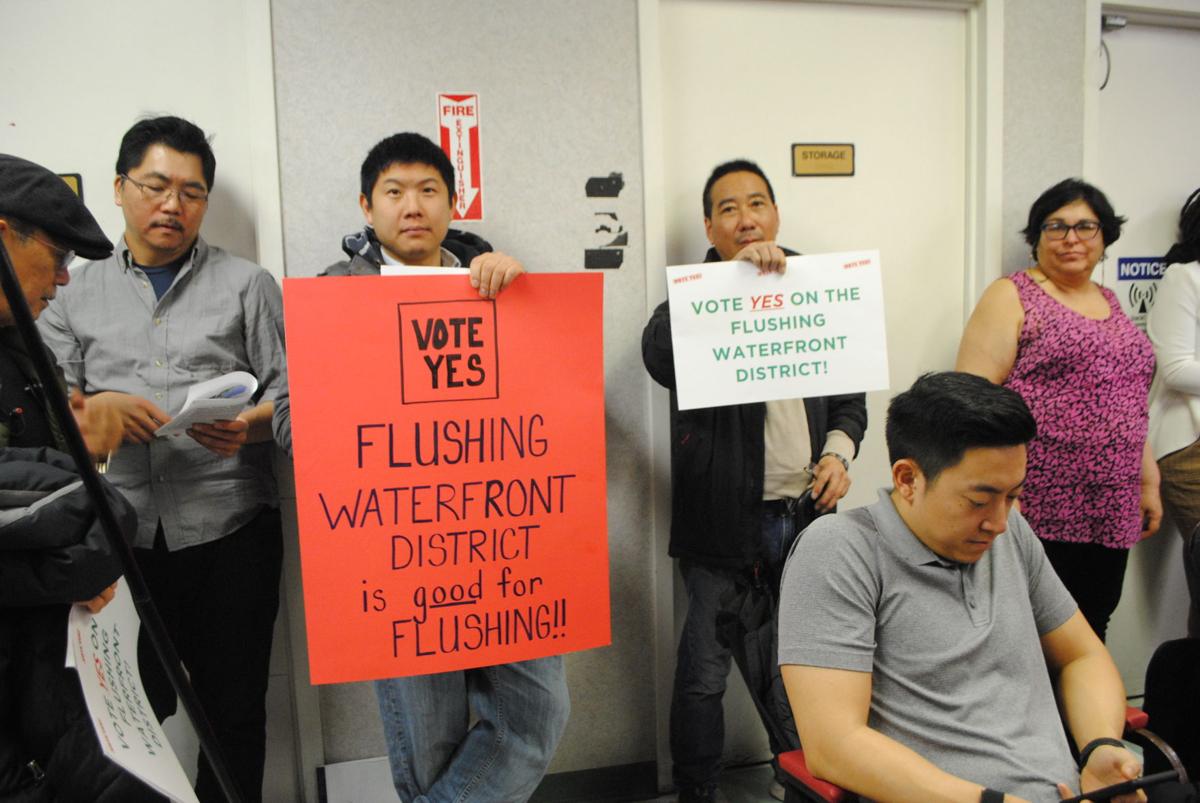 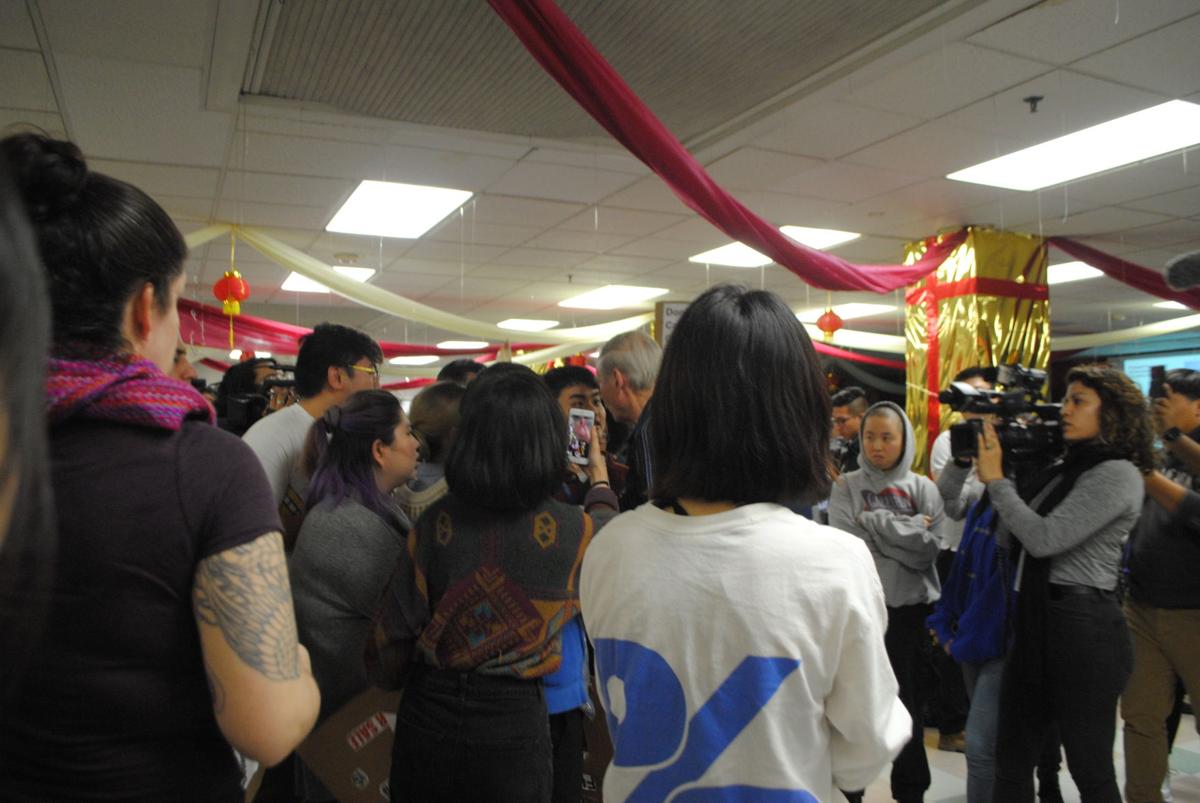 Zoning Chairperson Joe Sweeney, center, got in one of two heated debates of the night between board members and teenage protestors.

Protesters and supporters of the Special Flushing Waterfront District showed up to Community Board 7’s Monday meeting to persuade members to vote in their respective favor, but the board ultimately voted 30-8 to approve the project.

Protesters and supporters of the Special Flushing Waterfront District showed up in attempts to persuade Community Board 7 to vote in their respective favor at its Feb. 10 meeting.

Protesters had appeared at the previous two CB 7 meetings on the proposed waterfront project.

Zoning Chairperson Joe Sweeney, center, got in one of two heated debates of the night between board members and teenage protestors.

Tensions were high at the Feb. 10 Community Board 7 meeting, as protesters and supporters of the Special Flushing Waterfront District each attempted to persuade members to vote in their respective favor. After four and a half hours of presentations, public speaking and deliberation, as well as multiple derailments due to intense arguments, the board ultimately voted to approve the text amendment to establish the Special Flushing Waterfront District, 30-8.

“Shame! You are corrupt! People over profit!” protesters from MinKwon Center chanted. Multiple representatives of the Flushing advocacy group spoke during the meeting’s public hearing portion and voiced concerns over increased congestion, pollution, construction hazards and mass displacement resulting from the development.

“You guys weren’t here for the prior meetings when you had your chance to protest,” said CB 7 Vice Chairperson Chuck Apelian, who later chose to abstain from the vote due to a conflict despite making multiple points of approval. “[The plan is] going to happen either way and this is the better plan for our community.”

The community board approved the “proposed master plan” to rezone and redevelop the 29-acre stretch of waterfront industrial property and surrounding land in Downtown Flushing. The Brownsfield Opportunity Area plan seeks to extend the district to the waterfront, improve pedestrian flow and vehicular movement, add affordable housing and improve the water quality of Flushing Creek.

The project will lie between 40th Road to the south, College Point Boulevard to the east, 36th Avenue to the north and Flushing Creek to the west.

If CB 7 voted against the master plan, which promised open space, accessible streets and wider green area on the creek, an as-of-right plan would move forward in its place. The latter project did not propose the same benefits, and closed off the development from the public similarly to a gated community.

“The waterfront development right now is happening everywhere in New York,” supporter Dominick Shen said. “It can make the city nicer, more prettier, and if the government can clean the water then Flushing will become a very nice neighborhood.”

Other supporters believe the development will bring economic prosperity to the historically middle-class community.

Despite the many benefits proposed by the developers, owners and architects, local organizations sided with the protesters.

“This is not a responsible redevelopment,” said a representative from labor union 32BJ, who said that while the developers promise the creation of nearly 3,000 new jobs, they haven’t promised that those will go to Flushing residents, or that the workers will receive a viable wage or benefits.

Representatives of Riverkeeper and Guardians of Flushing Bay denounced the plan, claiming that there are no indications that the heavy pollution of the waterway has been or will be addressed.

“We demand an [environmental impact statement] period,” a representative of Riverkeeper said. “This plan ignores climate crisis concerns in a critical period.”

Other audience members followed that thought with a request for a socioeconomic impact study in addition to an EIS to fully understand the effects of the project on the community and surrounding land.

While protesters had attended the previous CB 7 meeting and its Zoning Committee meeting in late January, the Feb. 10 meeting was the first in which supporters made an appearance. They wielded identical signs reading, “VOTE YES. Flushing Waterfront District is good for Flushing.”

A majority of the project supporters appeared to be near middle age, while protesters from MinKwon were mostly high schoolers.

“I told my mom I would be home by 10,” one protester said as she realized the meeting would surpass its allotted time.

“I have two tests tomorrow!” responded another.

“It’s great to see so many young people here; we need to listen to them. They are begging us to reconsider,” said board member and Flushing Chamber of Commerce Executive Director John Choe. “Community members have told me about the effects displacement and not being able to afford living in the community are having on kids ... You don’t have to vote for this. You don’t have to get railroaded into this.”

“We need a plan that will address our needs, not the needs of developers,” a protester pleaded with the community board. Another followed, “Voting no on this project means you care about your community. These developers won’t hesitate to sell this immigrant community for a top dollar.”

The meeting was derailed more than once when the protests overpowered CB 7 members speaking at the podium, most notably when Chairperson Gene Kelty and Zoning Committee Chairperson Joe Sweeney, on separate occasions, confronted the young protesters to such an extent that 109th Precinct officers had to step in for fear that it would become physical.

The protesters seemed to have an initial sway on board members, who proposed a motion to table the issue for further discussion. The vote to table fell short, and the board ultimately voted to approve the project with several board members switching from opposition to support.

The plan now moves to the Queens Borough President’s Office before heading to the City Council for official approval.

“I have a number of concerns and priority areas that must be better addressed including: the low percentage of affordable housing units; the need to ensure the highest environmental standards and public access for Flushing Creek; a commitment to hire locally with family-sustaining wages and the use of union labor; not adding to existing congestion or negatively impacting quality of life in the area; and the necessity of educating the children who would reside in the proposed housing units, as schools in Queens are already at overcapacity,” said Rep. Grace Meng (D-Flushing) in a released statement the day after CB 7’s advisory vote of approval.

“With this proposal being such a major project for the area, it is critical that the process not be rushed. All of the issues I’ve raised must be addressed before the plan is voted on by the City Council.”

Clean up the water and stop any building whether it be residential or commercial. It is way too congested and filthy.