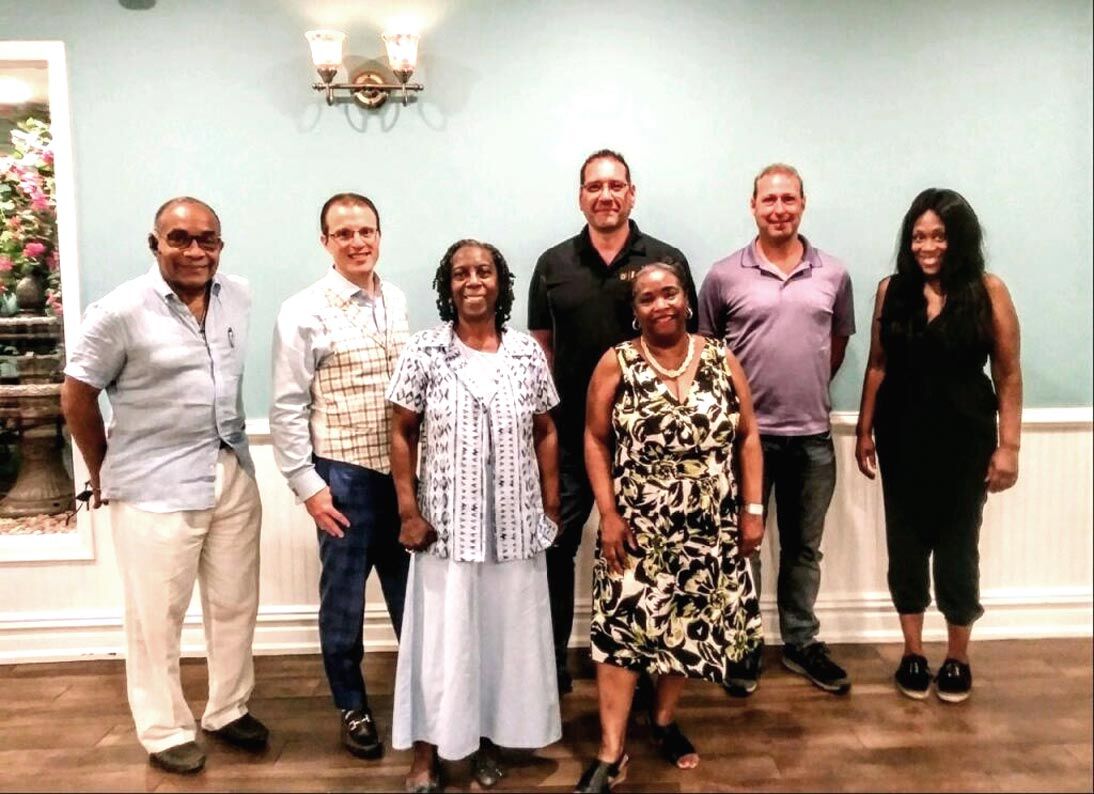 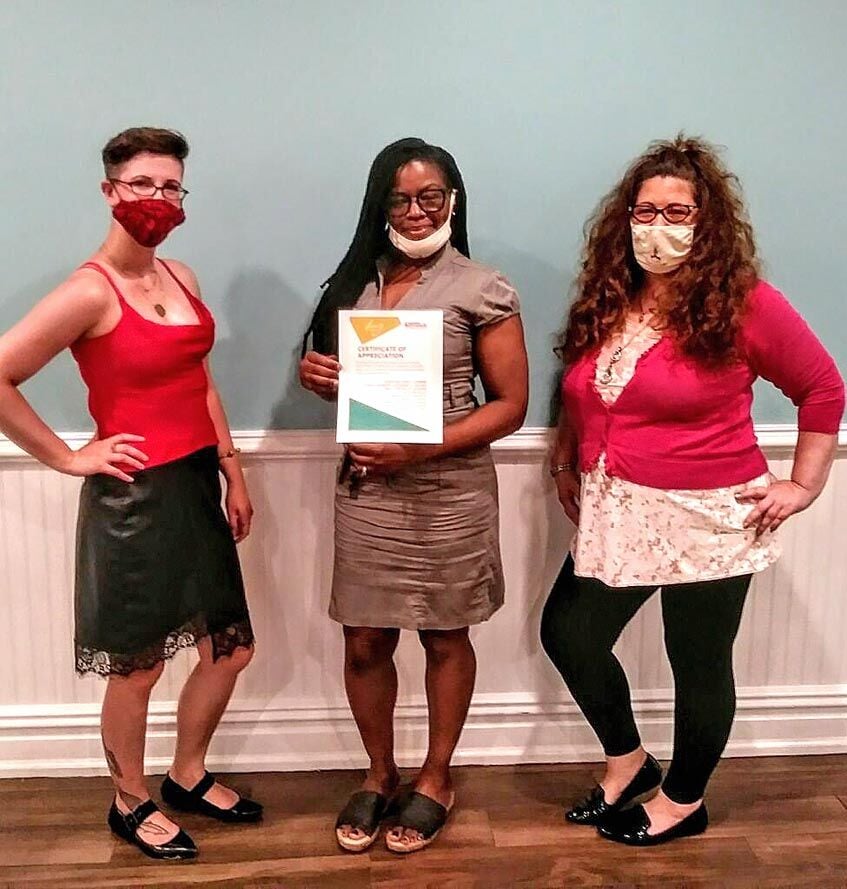 Small business owners and advocates came out in support of each other June 15 for a Back to Business event sponsored by the Queens Chronicle and Antun’s of Queens Village, which connected entrepreneurs and their supporters and allowed them to share business tips and resources with one another.

Ree Brinn, an account executive at the Chronicle, hosted the event.

“It was wonderful!” said Swift. “It’s what we need for the community and it was a great place for people to meet. People can go there to learn about what is going on in the community and have different resources. It’s something that is needed.”

Swift came up with the idea of the network seven years ago because she was tired of bias in the news, said the former broadcast engineer and disc jockey.

Because of Covid-19, Swift, who operates Our World with her son Joseph Swift, an Emmy-nominated photographer, and Glenn Greenidge, the executive director of the Sutphin Boulevard Business Improvement District, conducted interviews with guests online instead of face-to-face.

Greenidge, who is also a co-host at some of Our World’s WGJS radio shows, was at the event.

“I like the networking,” said Greenidge. “It was great to reconnect.”

On the radio show, Greenidge has conducted interviews with the police commissioner, elected officials and entrepreneurs of all stripes. As the executive director of a BID, he not only connects local business owners with resources, but he also contributes to the community.

Greenidge will be hosting a Summertime Musical Lunch Time Concert every Friday in August from 1 p.m. to 2 p.m. in the courtyard of the Queens Supreme Courthouse at 88-11 Sutphin Blvd. in Jamaica.

The BID director is working on including jazz, Southeast Asian, classical, reggae and other Caribbean music in the series.

“We want to include Asian music from Bangladesh or one of those communities,” said Greenidge, who is also working on the Harvest Festival set for Sept. 18 from 10 a.m. to 7 p.m.

In 2020, Greenidge had to cancel the Harvest Festival on what would have been its fouth anniversary, but he is glad that it will be coming back and that people will get to go from Hillside and Jamaica avenues to Sutphin Boulevard to explore what Downtown Jamaica has to offer.

In the past, the event has averaged 10,000 guests and had 100 vendors, according to Greenidge.

Working throughout the pandemic was Michael Radovic of Luxe Pest Control in Plainview, LI.

Radovic’s primary business was high-end kitchens, but the industry has changed and he is focusing more on the extermination business.

“The mindset of high-end kitchens is changing,” said Radovic. “People want them, but they don’t want to invest in all that offers, so I transitioned into the exterminating business and it started taking off for me.”

Radovic loves helping through his extermination business, but working during Covid-19 has been difficult.

“You have to operate under new standards,” said Radovic. “From [the Centers for Disease Control] guidelines and making sure my employees are protected — you know that was the biggest challenge.”

At the Back to Business event, Radovic learned about new credit card laws and regulations.

“Using a credit card is no longer the owner’s expense, it’s really the client’s expense,” said Radovic. “The credit card companies were gouging our businesses. Every time a client will charge, we will have to come out of pocket and pay for that. In turn we are paying for all these people’s points and rewards programs ... that is an added expense we can’t absorb anymore.”

Radovic hopes to grow his employee base and their salaries.

“I want to employ more staff,” said Radovic. “I want to be that employer that’s making sure that people are okay, that they have a job and that their families are taken care of. It makes me happy to know that I am helping somebody else out in a different way.”

The Back to Business event was the third attended by Patricia Rodgers of Choclat Loft, an event hall in Jamaica, and it was a great networking experience for her.

“We met so many different people,” said Rodgers. “We met people from CAZZNY Entertainment and we have a private event hall.”

“Covid-19 was horrible for us,” we had no bookings,” said Rodgers, whose new business opened nearly six months before the coronavirus business shutdowns of March 2020. “We are a small private event hall and we got a lot of great advice from larger event halls. Making connections was a great thing for us and it helped us to get through Covid-19.”

The key advice Rodgers received was to not shortchange her business.

“We are proud of the Choclat Loft. This is a family business,” said Rodgers. “Even though you want to lure the customers back, you don’t want to cut your prices in half. If a person still wants an event, naturally they don’t want to pay full price, but we still have to pay our bills — light, gas and our overhead. Our overhead didn’t change.”

Rodgers co-owns Choclat with her husband, Charles Rodgers, a native of South Jamaica.

“We opened this for Jamaica, Queens,” said Rodgers. “Now that things are getting back to normal the phones are ringing.”

Rodgers was able to keep the Choclat Loft open by keeping ads running in the Queens Chronicle during the coronavirus, so that people knew the business was still there and had a lot in savings from the first few months of operation.

“We kept afloat with what we had,” said Rodgers. “We had our grand opening in September in 2019 and were getting our feet wet, then boom a dry spell.”

Rodgers was surprised with an award from Brinn and Kelsey Brow, the executive director of King Manor Museum, for her involvement with events for both organizations.

Sharon Turnage, the founder of the Tyler Nicole Foundation Inc., was also at the event.

TNFI provides support to families that have suffered infant loss or who have a child with a life-threatening illness.

“From tragedy comes triumph,” said Turnage. “In 2000, I lost a daughter named Tyler Nicole. I lost her after birth. She lived for 26 hours.”

To cope, the licensed social worker founded the TNFI in honor of her daughter and to provide resources for other moms who are grieving or families with sick kids.

“We’ll provide funeral arrangements and we donate funds toward the funeral,” said Turnage. “When it comes to children who are sick — if the family needs help with medical or problems with living, we will connect them to services to help them.”

During the pandemic, TNFI partnered with other nonprofits to continue its work.

“We volunteer our services to help the community,” said Turnage. “We heavily rely on donations.”

Also at the event were Brett Rogers of IDC Vending, Grace Cohen of New Hope Lutheran and Mickey King of Antun’s.