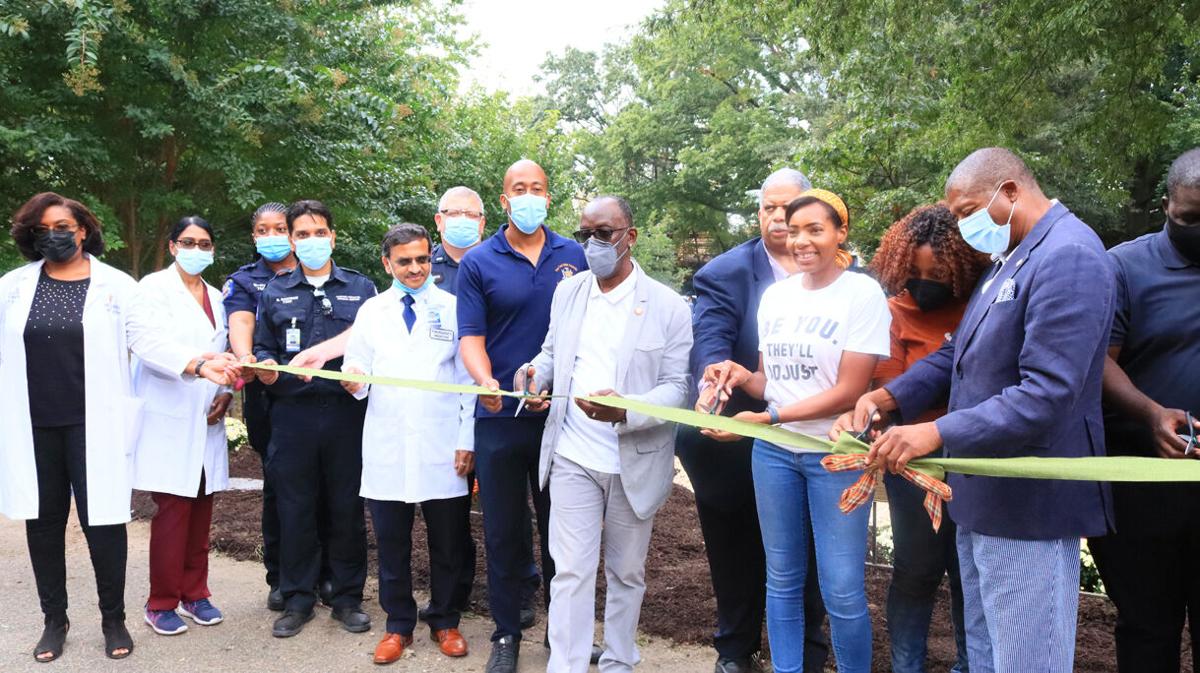 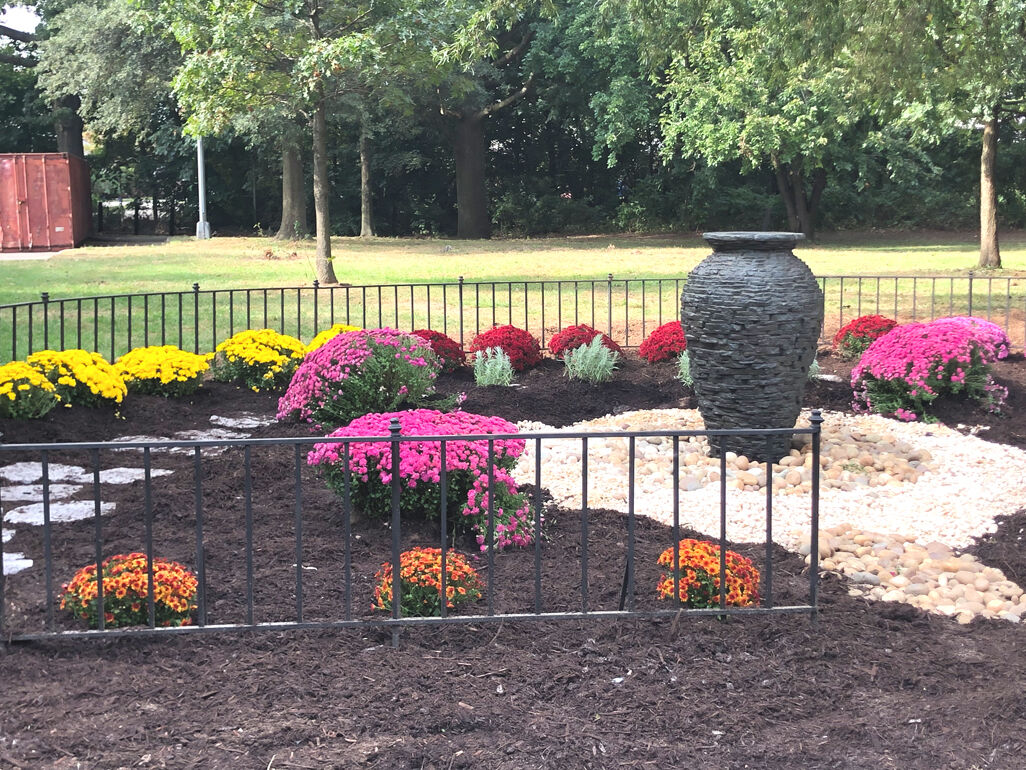 Earnest Flowers III and Dianna Rose helped to put together the Victory Garden as a place for mourning those lost to Covid-19. 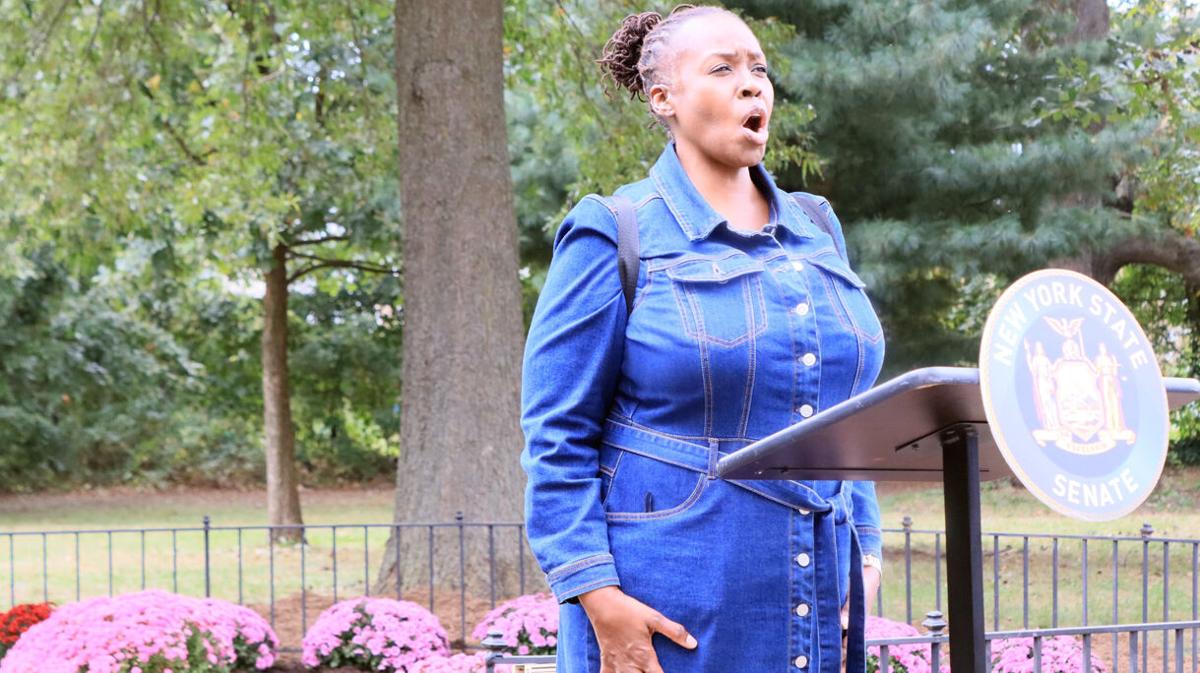 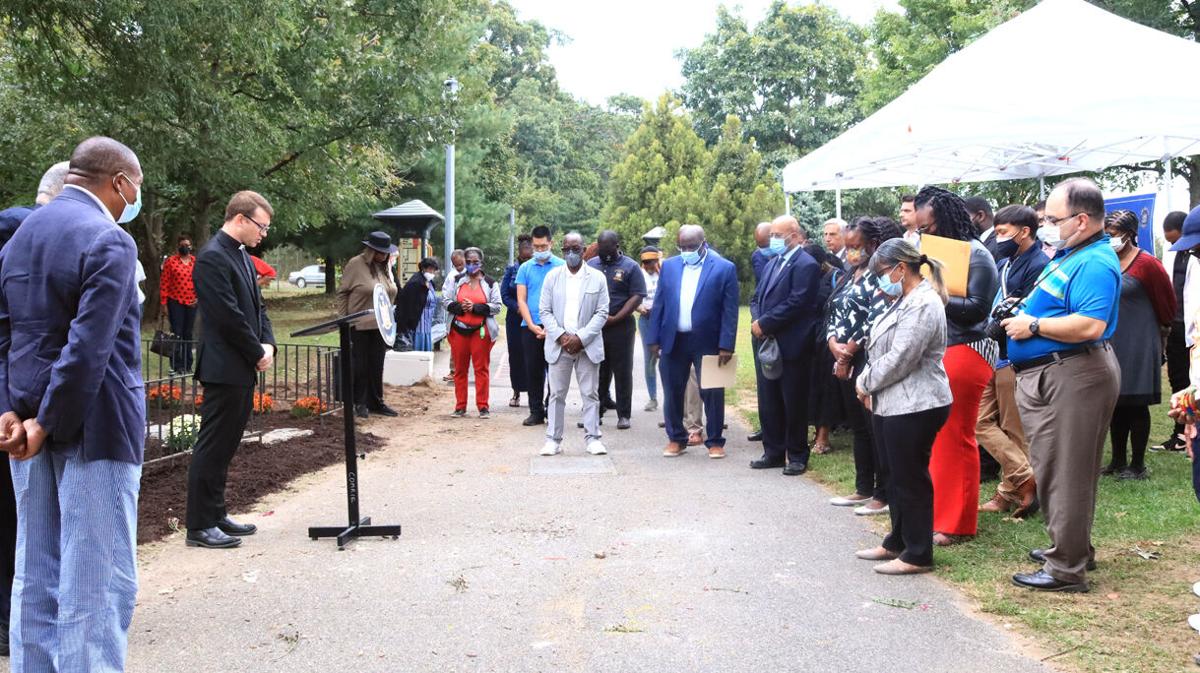 The Rev. Keith Voets of St. Alban the Martyr Episcopal Church leads silent prayer at the Victory Garden ahead of the ribbon cutting.

Earnest Flowers III and Dianna Rose helped to put together the Victory Garden as a place for mourning those lost to Covid-19.

The Rev. Keith Voets of St. Alban the Martyr Episcopal Church leads silent prayer at the Victory Garden ahead of the ribbon cutting.

A ribbon cutting was held at Roy Wilkins Park in St. Albans last Friday to honor the lives lost to the ongoing coronavirus pandemic with a Victory Garden located at 119-08 Merrick Blvd.

The Victory Garden, which is left of the Roy Wilkins’ parking lot and track field near Foch Boulevard, was the brainchild of Earnest Flowers III, according to the office of state Sen. Leroy Comrie (D-St. Albans).Many families in Southeast and Eastern Queens did not get to mourn their loved ones at funerals or memorial services, and the green space was set aside by the business consultant and St. John’s alum to allow them to grieve. It will also serve as the site for an annual commemoration.

Helping Flowers execute the project was Dianna Rose, a Laurelton resident and the founder of the Sovereign Markets, a community health and economic corporation.

“This is real,” said Rose, who planted chrysanthemums in a variety of colors ahead of the Oct. 8 ceremony. “We know that Covid ravaged our communities more than most other communities, not just in this state, but really in the country.”

Rose hopes the garden is a place that will assist in the healing process for those who are grieving and bring communities together.

“Mr. Flowers really is the genius behind the Victory Garden and just paying homage,” added Rose. “We don’t want Covid to come and leave and we not change and be reminded of what we went through as a community and how we came together.”

Praying over the event was the Rev. Keith Voets of St. Alban the Martyr Episcopal Church.

“It’s been a hard almost two years for Southeast Queens,” said Voets. “As a member of the community in the clergy, this is nothing like they have prepared us for. They don’t teach you this in the seminary, but the ... first responders here deserve a big round of applause.”

Representing the doctors, nurses, emergency technicians and respiratory therapists in attendance at the ribbon cutting from Jamaica Hospital Medical Center was Michael Hinck.

Chrysanthemums, also known as mums, are known as a symbol of devoted love.

“The last 18 months really tested us in ways that we could never imagine,” said Hinck. “Queens was the epicenter worldwide ... and during this time, our first responders, our frontline men and women ... fought bravely and tirelessly, and brought care and compassion for this community.”

Hinck thanked the Queens residents for the free meals and handmade facemasks that were delivered to frontline workers and the chalk messages of hope on sidewalks outside the medical center.

“The outpouring of love was so greatly appreciated and helped us get through this very difficult time,” he added. “I would be remiss to not acknowledge that there were many losses and those losses were hard on the entire community.”

“This park was slated to be an animal burial ground back in the ’60s,” said Comrie, who thanked park activists who fought against that. “They did the things necessary to make the park a public space for people. We are taking it forward.”

The park will get permanent funding from the city’s budget to maintain the property due to Councilman Daneek Miller (D-St. Albans), according to Comrie.

“The park will have city park personnel from here on forth,” said Comrie.

That will allow the Southern Queens Park Association, which is located in Roy Wilkins Park, more time to focus on programming and services through its recreational center, according to the senator.

“You have no idea how hard it was to convince the city to take a park that was community- and park-owned and to divvy it up in a proper manner so that the community can still control the usage of the park and the Parks [Department] can control the maintenance,” he said. “That is a big deal.”

Other city and state elected officials wanted a memorial outside of the World’s Borough, but Borough President Donovan Richards is grateful that residents fought to create their own.

Priscilla Carrow, who devoted 25 years of service at Elmhurst Hospital and was a shop steward for CWA Local 1180, was one of the 8,000 who died whom Richards acknowledged.

Ben Wright, of United Black Men of Queens, one of the activists who fought to maintain the park, was another life lost whom Comrie recognized.

“My father was a special man,” said Gary Wright on his father’s Ben’s birthday. “He would not have been able to do what he did without everybody’s support.”

“This is a community project,” said Comrie. “The pandemic has actually brought us closer together. We needed to combine services and share resources, share our frustrations and help work together to push the government to get what we needed and to convince our communities to work together also. That is one positive thing from the pandemic.”