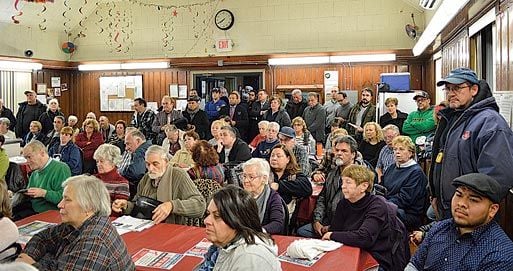 Woodhaven residents at a December town hall on the Department of Transportation’s Woodhaven-Cross Bay Select Bus Service proposal expressed their disapproval of the plan. More meetings on the project will be held in 2016. 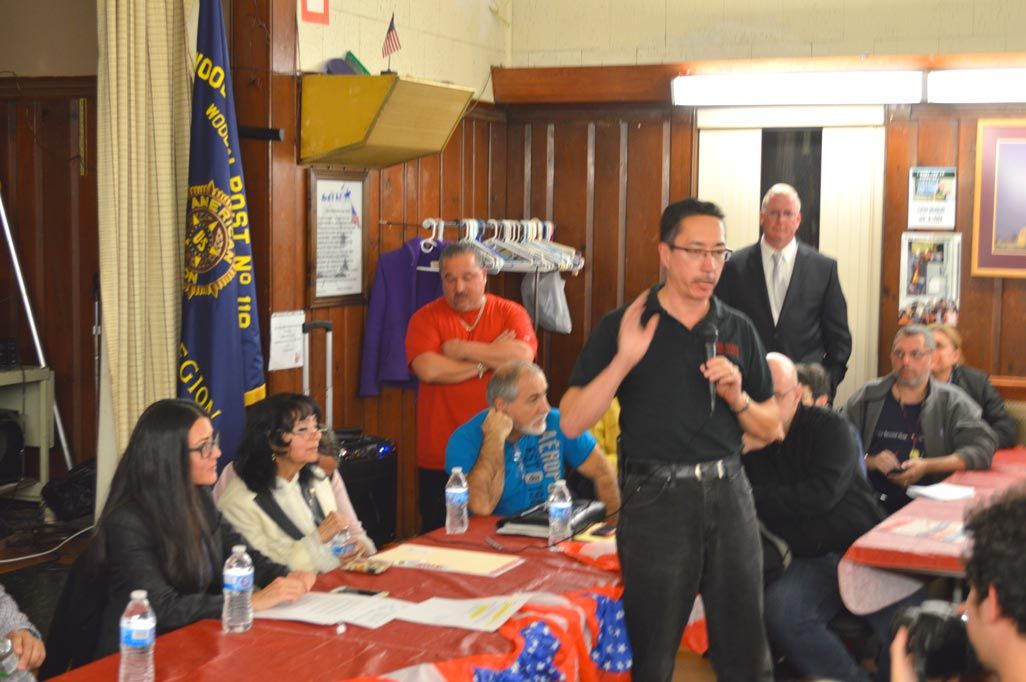 Community Board 9’s Transportation Committee Chairman Kenichi Wilson, with mic, expresses concerns that a dedicated bus lane could lead to a decrease in his quality of life. He was one of many who spoke on the topic at an SBS Town Hall.

Woodhaven residents at a December town hall on the Department of Transportation’s Woodhaven-Cross Bay Select Bus Service proposal expressed their disapproval of the plan. More meetings on the project will be held in 2016.

Community Board 9’s Transportation Committee Chairman Kenichi Wilson, with mic, expresses concerns that a dedicated bus lane could lead to a decrease in his quality of life. He was one of many who spoke on the topic at an SBS Town Hall.

It was South Queens vs. the Department of Transportation Monday night, as a standing-room-only crowd in Woodhaven told a high-ranking agency official why they don’t want to see dedicated bus lanes along the Woodhaven-Cross Bay boulevard corridor.

“I am a bus rider. I sit on that corridor every day and have been sitting on that corridor for 15 years. This makes no sense,” Vance Barbour, past president of the Woodhaven Residents’ Block Association, said. “It would benefit me greatly but I’m thinking of the bigger picture, which is that I’m a part of this community. It doesn’t make any sense.”

Barbour was one of more than 100 people who crowded Woodhaven’s American Legion Hall to express their opinions on the city’s plan to implement Select Bus Service along the corridor.

The crowd, all of whom except one — who only raised his hand to show he was in support of it — were opposed to the project, made their feelings known directly to Nicole Garcia, Queens borough commissioner for the DOT. Besides her assistant, Garcia was alone and was not joined by other city or MTA personnel.

Asked by a resident why the MTA, which operates buses and subways, did not show up to the meeting, Garcia said it did not work with the agency’s schedule.

“It’s not by design that they’re not here,” the borough commissioner said.

The town hall is one of many the DOT is planning to attend after it was announced last week that the SBS plan is being pushed back to 2017 to gather more public input.

At the one in Woodhaven, Garcia said residents may see full implementation of the plan in about two years.

“We’re aiming for a 2017 implementation but nothing is written in stone,” she told those there.

Unlike at past town halls on SBS, a plan for the project was not displayed. Instead, community leaders first spoke on the project, then gave Garcia a chance to state her position and then residents asked questions.

One of the questions, brought up by WRBA Director Alex Blenkinsopp, was if the town hall’s purpose was to gather information on how or whether to implement SBS.

Garcia said it was the former.

“We have a large population of bus riders who rely on this bus line,” she said of the Q52 and Q53 lines. “We see where we’ve implemented the eight lines in the past, we’ve seen that safety has improved and customer satisfaction has improved.”

That answer garnered shouts from the audience, which asked her where those SBS lanes where people are satisfied can be found. Garcia pointed to the service along First and Second avenues in Manhattan and added she could provide statistics proving the service was popular there.

“I’m happy to provide Marie with the safety data that I’m aware of,” she said, pointing to Greater Woodhaven Development Corp.’s Executive Director Maria Thomson, who co-hosted the town hall.

Thomson has been a staunch opponent of SBS for months, mostly due to the proposal to eliminate left turns onto Jamaica Avenue from Woodhaven Boulevard in both directions. One concern is that drivers will stop visiting the commercial corridor, leading the businesses there to die out.

“If Jamaica Avenue dies, that’s your biggest property and tax base in this area. They support the area and if we lose that, then we lose homeowners and then we are really going to lose our lives,” Thomson said.

“Our business district is small mom-and-pop stores that depend on every dollar that comes in,” Colberg said. “No left turns would really turn people away from the community.”

Motorists would have to utilize residential streets to access the commercial corridor, another aspect of the plan that residents expressed opposition to.

Jose Vasquez — co-founder of the Task Force for an Informed, and Safer, Better Woodhaven, which also co-hosted the event on Monday — presented Garcia and the audience with several videos and photos of what it looks like when tractor trailers drive down side streets in Woodhaven.

“You don’t have to imagine it anymore. This is what it’s going to look like,” Vasquez said, pointing to his pictures.

The visual showed trucks struggling to get out of the side streets, requiring some nearby residents to move their cars so the large vehicles could move safely, according to Vasquez.

Garcia said DOT personnel are aware of the community’s objections to the left turn bans, which are also being proposed at other intersections.

“That’s one of the things we’re trying to figure out. If that’s the right plan to implement for safety and also mobility,” she said, adding the agency would continue to “discuss” the proposal.

Another concern for residents is the city’s plan to have commuters wait for the bus on the median, where they would pay the fare before boarding.

“I would not want my junior high or high school kid standing in the middle of Woodhaven Boulevard,” Paul Capocasale, co-founder of Vaquez’s task force, said.

Many residents spoke out against that idea, saying there are too many erratic drivers who potentially could hit commuters waiting for the bus.

Barbour warned that SBS would not stop those drivers.

“You’re not going to be able to dictate whether someone drives responsibly,” he told Garcia.

Many residents pointed to bus-only lanes in Forest Hills and Rego Park — not part of the SBS proposal — and said those areas are already seeing additional congestion and frustrated motorists.

“I’ve found a minimum of a 23-minute delay. It’s affecting me drastically,” Community Board 9’s Transportation Committee Chairman Kenichi Wilson said. “So I’m almost cringing thinking about a lane taken away the rest of the way down the corridor. It has to work for everybody.”

Wilson lives on Woodhaven Boulevard and said when traffic backs up, the smell of exhaust fumes and sound of honking horns becomes almost unbearable.

“If there was something out there that was going to create more congestion, I don’t know how much longer I’d be able to live on the boulevard. I don’t know how healthy it is to tell you the truth,” he said. “We have to work together. There has to be something that works for everybody.”

Some people had a much more blunt message: Scrap the entire plan.

“The whole route doesn’t want this. From Woodside to the Rockaway. That’s the way it is,” he said. We need more frequency, not more bus lanes. We need more buses.”

Regarding more buses, Vasquez proposed having empty buses start at Rockaway Boulevard to accommodate more passengers — since many coming from the Rockaways are at capacity by the time they get to Woodhaven.

Another issue brought up was what some called a lack of transparency from the DOT. Several people mentioned an op-ed written by Allan Rosen, former director of bus planning for the MTA, that was published in the Queens Chronicle on Nov. 26 and argued the agency has not been forthcoming with the project’s data. At the town hall, Rosen asked Garcia for statistics that would prove SBS would improve traffic in South Queens. She responded that she will get those numbers to him.

Both he and McManus criticized the DOT for only showing parts of the plan at prior SBS town halls instead of the entire map.

“As if nobody travels outside the five blocks from where they live,” Rosen said. “People need to understand what’s happening all over the corridor.”

Garcia said she would take everything mentioned at the meeting to Polly Trottenberg, commissioner of the DOT.

“The feedback that we have received, the 300-plus signatures, the newspaper articles and quotes and talking to CB 9 leadership, that hasn’t been lost on us,” she said.

The title of this story says it all send it to our Mayor!

The title of this story says it all, SBS ‘makes no sense!