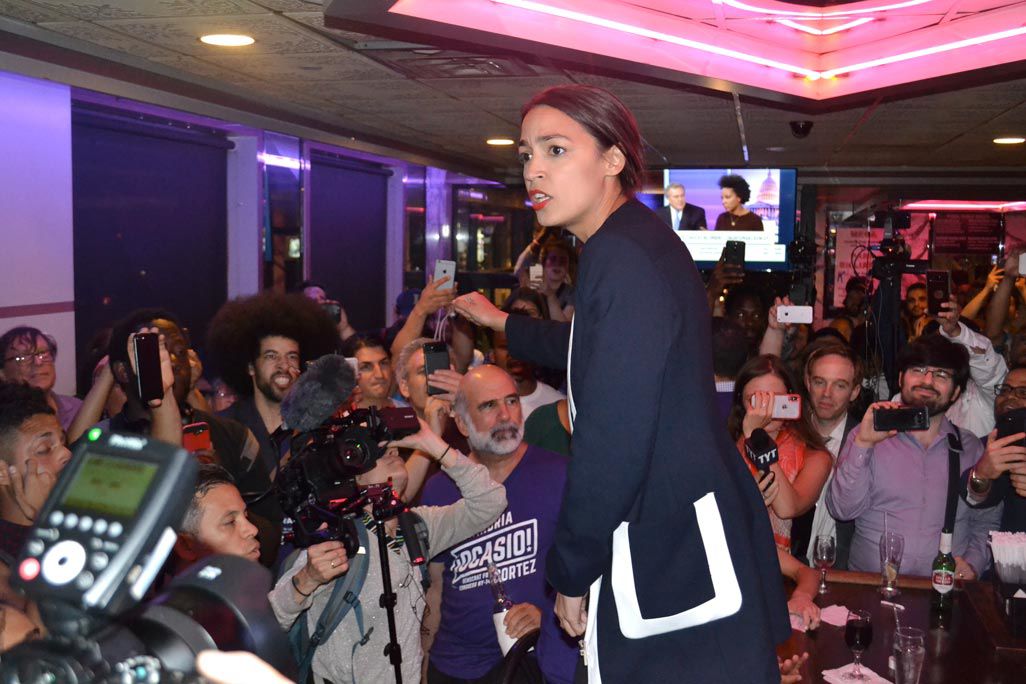 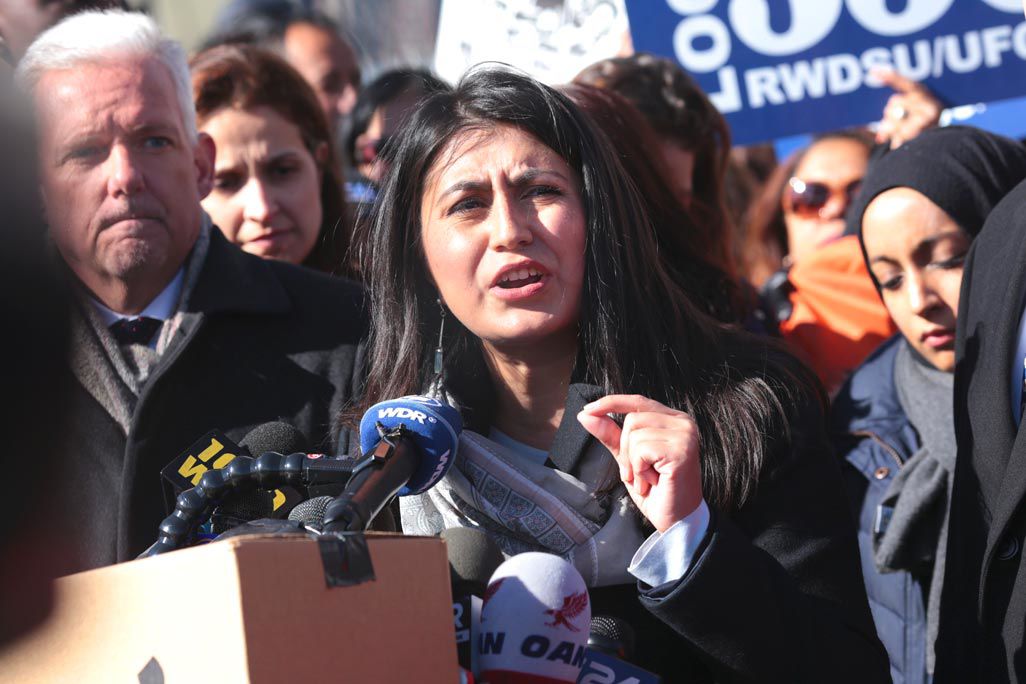 State Sen. Jessica Ramos speaks at a November rally against Amazon’s plan to build a headquarters facility in Long Island City. New York officials were going to give the mega-corporation $3 billion in incentives for the deal, which Amazon pulled out of in February in response to intense public pressure from grassroots activists.

State Sen. Jessica Ramos speaks at a November rally against Amazon’s plan to build a headquarters facility in Long Island City. New York officials were going to give the mega-corporation $3 billion in incentives for the deal, which Amazon pulled out of in February in response to intense public pressure from grassroots activists.

Challengers running from the left in 2018 also ousted five other Bronx, Brooklyn, Manhattan and Syracuse Democratic state senators, four of them IDC members, in primaries. And eight Republicans went down, giving Democrats a state Senate majority and a chance for the progressive freshman class to shape policy.

“We know that working people have been bearing the brunt of unaffordable housing, a decrepit public transportation system, schools that have been chronically underfunded and these are things that we really want to reverse,” Ramos told the Chronicle. “So, now that we’re in government, what we’re trying to do is reverse the tide from a system ... that has been rigged against working people for a very long time.”

And as reform-minded insurgents battle establishment Democrats on the national level, the left is increasingly ascendant in Queens politics. Grassroots activists in groups like Chhaya CDC, DRUM, Make the Road New York and the borough’s Democratic Socialists of America chapter were instrumental in getting Amazon to drop its controversial HQ2 plan in Long Island City. Their opposition campaign emphasized residents’ concerns about how the proposal would impact housing costs and burden the subway system, along with the e-commerce behemoth’s anti-union history and its relationship with U.S. Immigration and Customs Enforcement. Supportive elective officials including Cruz, Ocasio-Cortez, Ramos, City Councilman Jimmy Van Bramer (D-Sunnyside) and state Sen. Michael Gianaris (D-Astoria) bolstered their activism.

“Queens right now is where people should look at in terms of people-powered, community-driven approaches,” said Rapi Castillo of Forest Hills, a tech worker and organizer who helped create the canvassing app Reach to help volunteers working on Ocasio-Cortez’s campaign last year.

Castillo is affiliated with the New York Progressive Action Network and Queens United Independent Progressives. He was an activist in the HQ2 fight and is now volunteering for public defender Tiffany Cabán’s campaign for district attorney, which succeeded HQ2 as the latest major political battle for the left in Queens.

And more battles are coming.

Although it’s still early in the cycle, nonestablishment outsiders have already announced Democratic primary campaigns in the borough for June 2020. Seeking a repeat of Ocasio-Cortez’s success, DSA member and Marine veteran Shaniyat Chowdhury is challenging Rep. Gregory Meeks (D-Queens, Nassau), the new chairman of the Democratic Organization of Queens County. Activist and attorney Suraj Patel has reportedly said he may run against Rep. Carolyn Maloney (D-Manhattan, Brooklyn, Queens) from the left again after doing so last year.

It’s not just congressional races, either. Progressive activist Mary Jobaida will run for Assemblywoman Catherine Nolan’s (D-Long Island City) seat, one held by the incumbent for more than 30 years.

Given that the next primaries for the state Legislature and the House of Representatives are next year, it’s highly probable that more challengers will enter the ring. Especially since outsider candidates last year showed that with dedicated, grassroots activists on their side, they can defeat incumbents.

“I think AOC’s primary victory opened people’s eyes up to the possibility that knocking on doors and having a broad, small donor base in fact can really win elections,” said Bright Limm of Kew Gardens Hills, a member of the Queens DSA. “And I think her victory was justly celebrated because it really enlarged people’s imaginations of what’s possible.”

Limm, a member of the Working Families Party’s state committee and former president of Korean Americans for Political Advancement, joined the DSA last October. The group’s membership in Queens has seen major increases over the past two and a half years, as it has across the city and country. As with other left-wing organizations, the progressive galvanization created by the shocking election of Donald Trump is considered an important factor in its expansion. Other groups active in the borough, like True Blue New York, One Queens Indivisible and the New Queens Democrats were formed after Nov. 8, 2016.

While borough progressives’ main target may have been Trump, it wouldn’t take long for a Democratic legislator to ignite their opposition. Less than three months after the Jamaica Estates native was elected, the western Queens Senator Peralta joined the IDC.

Many of his constituents were outraged. One of them was Jackson Heights resident Susan Kang, a DSA member who co-founded No IDC NY, a group focused on replacing members of the faction with more dyed-in-the-wool progressives.

“It was a local response, initially, to Peralta joining the IDC and it wasn’t really clear what that was going to be like,” said the activist, who is a political science professor at the CUNY John Jay College of Criminal Justice.

In last year’s cycle, Kang and others in No IDC NY worked closely with True Blue New York and Empire State Indivisible, groups that also fervently opposed the group of GOP-allied Democrats.

“All these little groups were trying to figure out how to best organize their network to create action around the political context of 2017 and 2018,” she said.

Kang’s organization and its allies educated voters about the IDC, built a strong social media presence, held town halls in the districts of the breakaway faction’s members and volunteered for the campaigns of their challengers.

“In the meantime, the DSA and other grassroots groups were falling into the Ocasio-Cortez orbit and we eventually endorsed her and helped run her field campaign,” Kang said. In the later months of the now-congresswoman’s race, countless DSA members were out door-knocking for her.

In recent months, that group and other grassroots ones in the borough have been fighting to get Cabán elected Queens district attorney. Borough President Melinda Katz is widely seen as the frontrunner in the seven-person contest, which also includes ex-Queens judge and prosecutor Gregory Lasak, City Councilman Rory Lancman (D-Fresh Meadows), attorney and former prosecutor Betty Lugo, former Civilian Complaint Review Board chief Mina Malik and ex-state prosecutor Jose Nieves. Katz leads the pack in fundraising and is supported by Meeks, though Cabán is bolstered by a dedicated and sizable network of grassroots activists.

“I think Tiffany has a good ground game,” said Morry Galonoy of Woodside, a Queens County Democratic Committee member who is volunteering for Cabán. She has strong social media and canvassing operations, he said.

Pointing to a variety of factors, including the media consumption habits of millennials and popular dissatisfaction with the political establishment as the middle class shrinks, Galonoy argues that it’s easier for noninsiders to win elective office in Queens today.

The borough Democratic Organization's support is no longer necessary for a candidate, he said. “Non-party-stamped candidates can get in.”

This story has been updated to more accurately reflect statements made by Queens County Democratic Committee member Morry Galonoy.