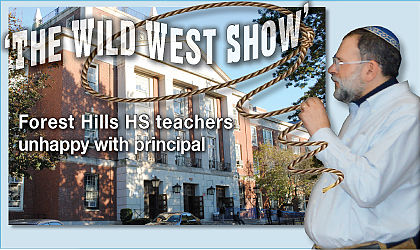 Forest Hills High School teachers took a no-confidence vote against Principal Ben Sherman, as concerns grow about the safety of the school. 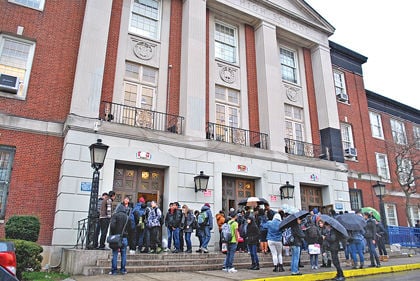 Teachers and faculty are concerned about safety issues at Forest Hills High School with many blaming Principal Ben Sherman for the problems.

Forest Hills High School teachers took a no-confidence vote against Principal Ben Sherman, as concerns grow about the safety of the school.

Teachers and faculty are concerned about safety issues at Forest Hills High School with many blaming Principal Ben Sherman for the problems.

Teachers at Forest Hills High School have become increasingly disturbed by incidents in the building, including fights, drug usage and even one instance in which a student threw urine into a classroom.

One teacher described the fourth floor of the building as “The Wild West Show.”

In a poll last Thursday, UFT members voted no confidence in Principal Ben Sherman, who has held the spot since early 2017, by a 195-21 vote.

Adam Bergstein, United Federation of Teachers chapter president of Forest Hills High School, said he heard from many different people in the school.

“The concerns were brought to me from every different constituency in the building and I mean, administration ... teachers were fed up and overwhelmed and disgusted, the aides in the building, students,” he said.

Bergstein added, “Ninety percent of the staff feel as though the principal is incapable of managing Forest Hills High School and, or maintaining the building at the level it’s been at for decades.”

A main issue has been theft, which teachers say has increased since Sherman removed aides from the locker rooms.

Sherman could not comment because he was not cleared to do so by the Department of Education.

According to UFT Consultative Council minutes from a Dec. 6 meeting acquired by the Chronicle, a physical education teacher said a locker room attendant is needed, to which Sherman said safety and hallway issues predate him and that the hallways significantly improved. A teacher responded by saying groups of students still congregate all over the building.

“Mr. Sherman answered that some of these problems are not fixable; there are 24 staircases and there will always be students roaming, vaping and smoking,” according to the minutes.

“There’s pot almost every day,” a history teacher said. “And usually it’s the students smoking in the bathrooms or the stairwells. He doesn’t have a policy anymore for getting kids to class and not being late like the previous principal did.”

One teacher said Sherman indicated marijuana is legal in many states and would soon be in New York.

At a UFT Consultative Council meeting last May, Sherman stated that rather than station aides by the bathrooms, “money could be better allocated in other things.”

Fights would break out in the bathroom and, in another incident, a student jumping up and down violently broke a toilet from the wall. An email said on the verge of the no confidence vote, the principal began returning aides to positions from which they had been removed.

Before becoming principal of the school, Sherman held the same job at the East-West School of International Studies in Flushing.

“I think he’s just incapable of making decisions from representatives within the building,” Bergstein said. “I think because he’s had a small building for over a decade and he doesn’t know how to run or operate a large high school, he’s just a fish out of water and he lacks that skill set and ability.”

Bergstein said there were complaints during the 2017-18 school year but the hopes that things would improve this year quickly disappeared.

“We were hoping that the principal would take suggestions, advice, recommendations from unions, from deans, from administration and implement some of these changes to alleviate the concerns and we picked up in September where we left off last school year and things just deteriorated from bad to worse,” he said.

The history teacher said the troubling behavior of students is seeping into the classrooms as well: “You get the students’ attitudes mostly coming from the experience in the hallway and it’s very tough to calm the students down now.”

An email from a teacher stated that alarms have been turned off on the outer doors despite teachers asking that they be reactivated. The teacher said in one incident students from another school were let in through the unalarmed doors, leading to a teacher being hit and an SSA suffering a concussion.

Sherman also approved a petition from students to wear hats, which one history teacher said “set the tone” for the year.

Capt. Jonathan Cermeli, commanding officer of the 112th Precinct, said things have gotten better in the wake of the attack and that from time to time there are some complaints about disorderly kids during dismissal.

“Since then, we pretty much have a good handle on everything,” he told the Chronicle. “We’re up there during the dismissal hours. We’ve pretty much implemented zero-tolerance, so if we see kids fighting or anything going on, we take action immediately.”

He added that there was a fight in the school that was handled internally and the precinct was notified after the fact with a student suspended and later transferred. Cermeli said it’s no problem that the school handled it as long as nobody was hurt or needed medical attention but that incident never rose to that level.

Bergstein said the no confidence vote was a result of safety concerns, noting there wouldn’t be a vote just because teachers and administrators don’t like Sherman’s style or philosophy.

“He’s a graduate of the Leadership Academy and those people are just some of the most horrendous principals to walk the Earth,” Bergstein said.

He added that he believes Sherman would be helped by taking the advice of others into account.

“He makes unilateral decisions,” Bergstein said. “Instead of taking into account what people have been doing in the building or recommend doing in the building for years, he just goes ahead with what I guess he deems his gut or what he believes will work. And he is clearly incapable of handling that kind of situation.”

Saul Gootnick retired as principal in December 2016 and Anthony Cromer served as acting principal until Sherman was brought in a few months later.

“I honestly believe it was with the intent to shake things up and disrupt the school environment for some reason,” Bergstein said.

He added, “It’s sad that the DOE seems to have gone out of their way to disrupt a high school with a sterling reputation.”

DOE spokesman Doug Cohen told the Chronicle, “The superintendent and principal will continue to collaborate closely with the school community to ensure staff members are receiving the support they need.”